The Burning Ghat of Manikarnika

The authenticity of death is more than that of religions".Varanasi is considered most sacred city in the world.The most authentic place in the city for a seeker of truth is situated to the right of jalasen ghat and one could walk from Dashashwame ghat (which is famous for ganga aarti)along the riverside .The ghat is known as Manikarnika ,and is situated approximately 5 km from the Varanasi railway station.The word Manikarnika can be broken into two separate divisions; Mani-Beads,Karnika-Ear ornament.

When you first watch Manikarnika from the boat you weave through a maze of funeral pyres hissing,steaming,and spitting orange embers into a gloomy night,and you can feel the unconscious inner voice of your fate,and a wave of furnace like heat consuming everything in its reach.The ghat is working 24/7.

The legend proclaims it as a ticket to heaven and that's the reason people consider it as a sacred place for cremation.Due to this reason we find many seekers and elders in latter part of animate life across the country spending their time absorbing charisma of ghat and pondering,understanding death.This has been beautifully illustrated in the movie "Hotel salvation" or "Mukti bhawan" .Manikarinka has also been featured in Morgans free man -The story of God",and in the International film Baraka(1992). It has been observed on an average around 200-300 bodies are cremated on a daily basis.The Mahaghat can accommodate 60 bodies at a time including the rooftops beside the ghat.

Meanwhile back around 2500 years back.When Buddhism,and Jainism were at their peak.There have been evidences in the scriptures of both the religions that to cultivate the sense of detachment Bikshus(Monks) were sent to the cremation grounds.It was a part of the regime to stay in the grounds for 6-9 months as it would inculcate the truth as it is.This was the first step before one could see their past life.The theory is" Jaati-smran",Bu now one can see the"commercialization of death" around the ghat making people insensitive towards the truth.This place is of immense historical value the initials of which are implicitly explained in the introduction of the book-"Kundalini:An untold story by om swami. I will summarize it as follows:

Long before us an eternal yogi meditated,and lived with his consort sati. Once's sati father daksha organized Yajna or Royal gathering.All were invited except Shiva. Shiva was meditating quietly on kailasha ,but sati went there uninvited .She had been refused to go out there by Shiva. Sati with great eagerness ,and curiosity went around looking  for shiv's seat in the yajna,but there was none.She had to face the stern attitude of her father.When she inquired where should she seat in the yajna as there was no seat reserved for her husband.The father was very furious,and said "I disowned you the day you married that eccentric idiot".She repented for not listening to her husband.After being humiliated by her father in the very moment she invokes her latent energy and turns her body into a mound of ash. Enraged at the insult,Shiva destroyed daksha's yajna and cut off daksha head.But he didn't stop there,he kept raging with anger.Gods prayed to lord Vishnu to stop the tandava ,the celestial dance of destruction which was done with the remains of sati's body.Vishnu used his sudarshan chakra,which cut through sati's corpse into 51 parts .Thereby was laid the foundation of "Shakti Peeth" of which manikarnika is one.

Mostly the cremation grounds are maintained by the government authorities,but the peculiarity of this ghat is that it has been down ages maintained by a family known as dom.The head of this family is called Dom Raja.Its a big climb down from the days of kallu;the ancestor and the first dom raja. As a part of their ritual the doms prays to kallu dom before starting work everyday.They are keepers of sacred flame revered by all Hindus.The sacred fire is around 3500 years old.No matchstick is used in the ghat everyone must use the sacred fire for cremating the bodies.Earlier the doms have been accused of extortion.As a result ,today one has to give a nominal value of 101 Rupees for taking the sacred fire.

The wood here is brought from the jungles of Vindyachal which is around 81 km away from Varanasi,and Mirzapur. Another thing that I came to know in manikarnika is that six types of bodies are not cremated here like of a pregnant women,Children,Accident victims ,Person bitten by snake,Person suffering from Leprosy,Victims of suicide,murder.While communicating with the locals about some prolific legend they said people can  six times be cremated elsewhere,but the seventh time you have to be here.It could look hypothesis to some of you,some might believe in it.

Death is an uncomfortable pause,and you can make it beautiful through the essence of understanding it.Water evaporates and it rains back,Natures play continue.Drop all your fears,visit this authentic place. 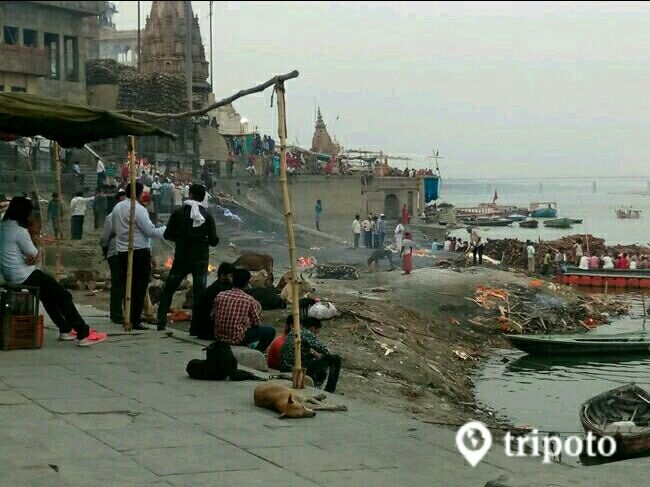