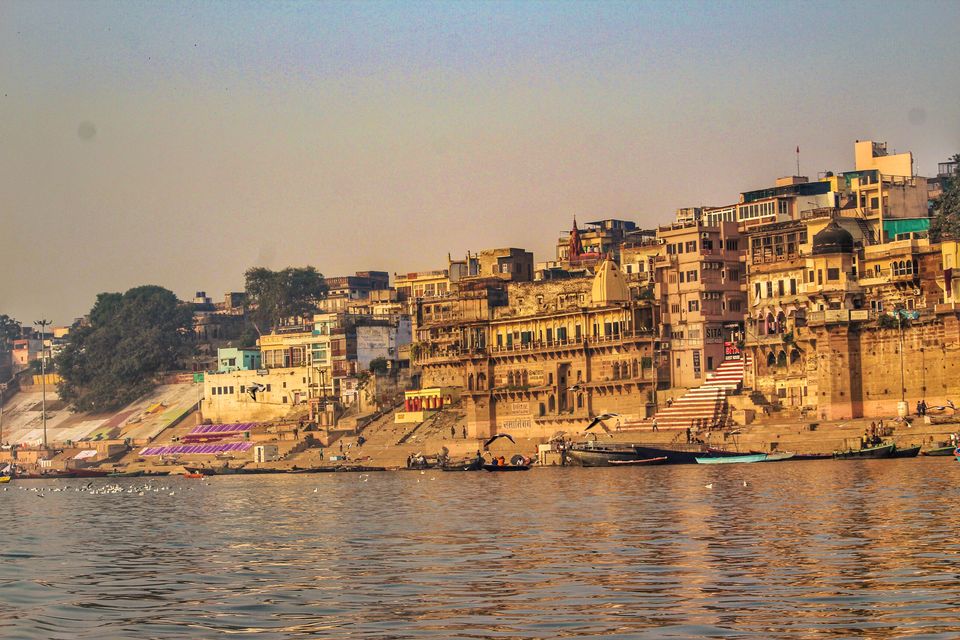 Varanasi has every reason to be in your bucket list because it offers a wide variety of travel experience which includes streets, ghats, boats, food, culture, spirituality. The kind of India you imagine. The city is scared and spectacular.

Dashashwamedh Ghat is the most happening and liveliest ghat of Varanasi. It is the oldest ghat out of 88 ghats. This ghat is famous for so many reasons one of which is its evening Ganga Aarti. The crowd here is beyond imagination but the view is spectacular. You can hire a boat from the ghat to watch the rituals from the water.

Kashi Vishwanath temple is an important and famous temple dedicated to Shiva. It is one of the 12 holiest Shiva temples termed as jyotrilingas. The temple is located on the banks of River Ganges in Varanasi. You can reach the temple by taxi or auto rickshaw. The rituals starts early by 3 am in the morning. The second ritual starts by 11:15 am. In the evening, rituals starts at 7 pm, 9 pm and 10:30 pm. The temple closes by 11 in the night. There is no entrance fee to enter the temple. You can buy flowers for the deity from the nearby shops. However, it is not compulsory.

The temple has numerous shrines. The main shrine has a linga (form of Shiva) which is 60 cm tall, placed in a silver altar. It will takes 45-60 minutes to see the main deity after standing in a queue. If its a special occasion or festival you have to stand in the queue for many hours. You are not allowed to bring camera, cigarette, lighter, liquor, metal object including belts and weapon of any form into the temple. The temple has numerous exits and entryways. It is easy to get lost. Learn the name of the entrance from any shops nearby. This will help you to get back to the same entrance.

Out of 88 ghats in Varanasi, one of them is Assi Ghat. The city of Varanasi is known by many other names, but this particular name originated from the confluence of two rivers, Varuna and Assi. The ghat is popular and crowded mostly because of the students from nearby Banaras Hindu University. One can engage in various activities at this ghat like boat rides, ganga aarti, cultural show called "Subh-e-Banaras", eat at one of the many cafes in the area. Lemon tea here is a must try.

Manikarnika Ghat is one of the oldest and holiest Ghats for Hindu religion. It is believed that if the dead body of a person is cremated here, then the dead human’s soul finds salvation/Moksha. The majority of the Ghats were built for bathing and some were created for ceremonies, only a few, like Manikarnika Ghat, are reserved for cremation as a form of funerary rite. It is believed that death is even painless at this ghat.

It's the narrow streets of Varanasi that holds the charm of old city. It feels like one can get lost in these streets but fortunately will end up in front of the river or on the main street. The crowd here is crazy and overwhelming. You will find traffic and temple everywhere. The best way to cover it by foot. However your walk is disturbed by the constant need to step aside in order to avoid being hit by a motorbike.

The trip to Varanasi is incomplete without this significant part of its culture which is Food. The people of this city love to eat. The food here is extremely famous. You will find varieties of street food. Some of the best and must try delicacies are tamatar chaat at Deena Chat Bhandar, Variety of Lassi at Blue Lassi, Masala Chai, Malaiyo, hot kachoris and Samosas, Masala dosa and idili, Maalpua and ofcourse the most famous Varanasi Paan.

The city become more colorful at the time of Dev-Deepawali which is a unique festival celebrated in Varanasi. On this day all the ghats are lit with more than a million diyas. Dev Deepavali, celebrated on the fifteenth day of Diwali and Just like Diwali every house is decorated with oil lamps and lighting and firecrackers burnt at night. Dev Deepavali is held on the full moon day in the month of Kartik (also known as Kartik Purnima). It is believed that the Gods descend to Varanasi on this auspicious occasion to take a dip in the River Ganga. This is what makes this festival so popular.

The 'Ganga-Aarti' is an important and must watch event in the evening. Almost all Ghats organize their own ceremony. Thousand of people come to watch the spectacular and elaborate aarti at the river ghats. The view during this auspicious festival is enchanting and magical. This is the best time to visit Varanasi.