For itinerant travelers, exploring Southeast Asia has always been a sort of rite of passage into that vaunted list of people who have dared to cross the norm of general tourism. Laos is one such small country, whose name is often dwarfed by its more popular neighbors - China, Cambodia, and Thailand. But, slowly, Laos is also emerging as a popular tourist destination, as the many treasures it has to offer its visitors are slowly being discovered. A vibrant history that draws from its own culture, which is predominantly Buddhist, and later colonial heritage, has been a huge factor in increasing its popularity. Despite the intermingling of these, Laos retains aspects of an 'Asian' culture that have been lost in the neighboring countries due to rampant commercialization and urbanization. Thus, extending my sojourn in Southeast Asia, I decided to head to Laos after my stay in Thailand. Laos has many cities that offer many worthwhile and fun experiences. Here I have listed some of the most memorable ones during my stay in Laos.

In Chiang Khong, Thailand, I took a boat down the Mekong River, which took me to Laos. Beautiful scenery on either side of the river, calm and relaxing waters lulled me to sleep, no matter how much I tried to stay awake, I ended up taking almost 20 naps as we floated into Laos. The journey was in a way a prelude to the country that awaited me, full of tranquility and absent of all the stress of a daily humdrum life. On the undulating river, meandering through majestic mountains and deep gorges was a journey that has left an indelible imprint on my mind.

Nevertheless, being Southeast Asia, Laos is not just a serene alcove but full of adventures. In Vang Vieng, the Nam Song River is a place where water sports like kayaking, tubing, and mountain climbing will satiate the thirst of even the most adventurous. Amongst all of these, tubing is crazy fun. You free-float down the river on your tube, stopping at many bars that are scattered along the river to glug down a few drinks and then you can get back on your tube to repeat the same process at another bar. A process you'll be repeating again and again, so you can bid farewell to the deposit on your tube, you'll never be able to restrict the time you spend here. Apart from tubing, mud wrestling and drunken volleyball also add to this chaotic adventure.

Setting aside the obviously adventurous activities, Laos also had adventures of a different kind, the ones that include exploring the country's rich history. The Buddhist culture is best displayed in the Pak Ou Caves in Luang Prabang. The mouth of the Nam Ou is full of miniature Buddha statues. The cave is divided into two parts, the upper part, which is easily accessed, and the lower caves, which requires you to descend a series of steps, which can be tricky because it can get a little dark, so make sure you carry along a torch.

After exploring the caves, there is an amazing hike to the Kuan Si waterfalls in Luang Prabang. The hike is truly picturesque with an overwhelming array of scenes that highlight the natural beauty of Laos. The hike takes you through local villages set in mountainous landscapes, a Fair Trek project site and more... After 4-5 hours of trekking, you finally reach your destination - the Kuang Si waterfall and its pools full of clear water.

Laos also has great places to shop at, where tourists can pick up innumerable curios and memorabilia. Silk, Handicrafts and Mulberry Tea make for amazing keepsakes. Even for those who aren't too keen on shopping, just roaming around the famous Night Market is a lot of fun, as it lets you experience numerous aspects of the culture and traditions of Laos.

Laos' traditional massage is another experience you shouldn't miss. They are cheap and not what people generally expect of massages, and are quite novel. After being given comfortable, baggy clothes to wear for the massage, you'll be led to a room that you will share with other people (with perhaps a sheet separating all of you from each other), you will be given what can only be described as an interactive massage as your legs are bent up over your head while your body is pounded upon. Not really relaxing, but invigorating as they really do give your muscles quite a workout.

My journey sadly came to a premature conclusion at the Royal Palace Museum, a great place to explore the history of Laos. Having run out of time, I was forced to cut my trip short. In the end, Laos, despite being a small country, has many big surprises waiting for those who visit. Apart from the places I mentioned, there are other, more fascinating places that Laos has to offer. Laos is definitely not a country to be overlooked!

A tiny country landlocked by its larger and more popular neighbors, Laos' popularity is just beginning to grow, fast making it a popular tourist destination. Splendid architecture, natural beauty and remnants of an Asian culture quickly disappearing from this part of the world are a few of the things you can explore, experience and enjoy in Laos. 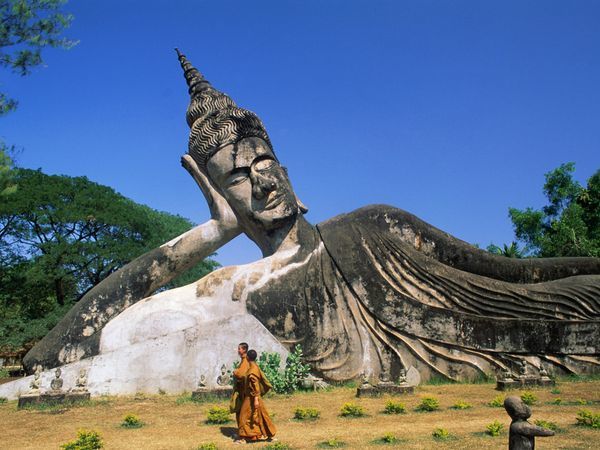 Floating down the Mekong River is perhaps the most scenic route into Laos. Traversing through mountain forests and gorges, it flows on the borders of Thailand and Laos. The 7th longest river in Asia, it shows you vistas of Laos' natural splendor, that few other places can. A boat trip on the Mekong can easily be booked on the piers at Huay Xai and Pakbeng. Another convenient but pricier option is to book a boating package at one of the guesthouses in Laos. 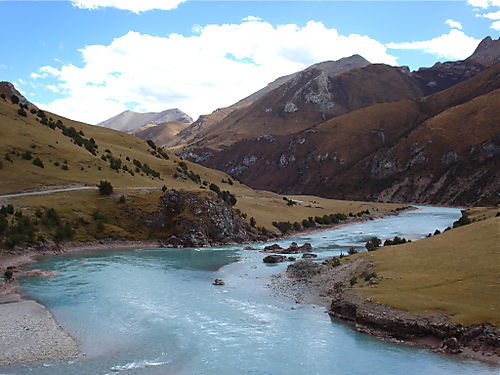 Vang Vieng's main draw is the tubing and kayaking on the Nam Song river. In the daytime, one can enjoy activities like Kayaking and Mountain Climbing. And in the night, one can relax and wash away the tiredness with other travelers while listening to music and playing a few games at the tubing bars. 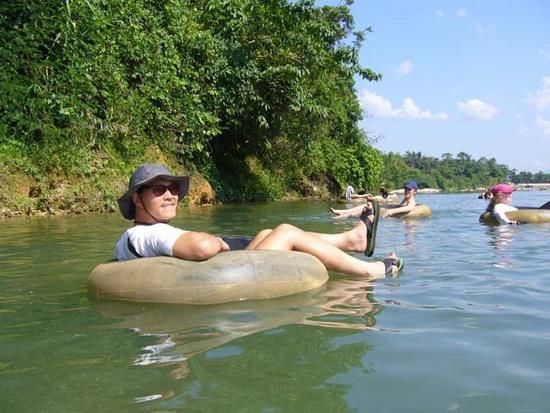 The Pak Ou Caves overlook the Mekong River just where it is about to meet the Ou River. Situated in a mountain face, they have hundreds of Buddha statues in a myriad number of shapes, positions and sizes. A visit to the caves can be arranged, either by hiring a guide or soliciting the help of a local from Luang Prabang. Once at the caves, the entrance will cost you $1 and the boat ride, $10. 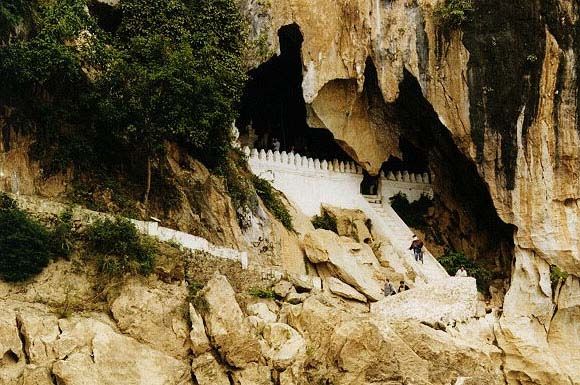 The Kuang Si Waterfall will take you breath away. Seeing the crystal clear water as it falls down roaring, into a lake so transparent, the water feels looks fit enough to drink! . Playing around in the water you will notice millions of tiny fish that dart about in the lake. There are also ropes attached nearby so you can swing into the lake, indulging your childhood fantasy of being Tarzan! For those who want activities that are a tad bit more mature, hiking trails abound in the nearby area leading you to and through other waterfalls, bridges over streams, and lush forests. 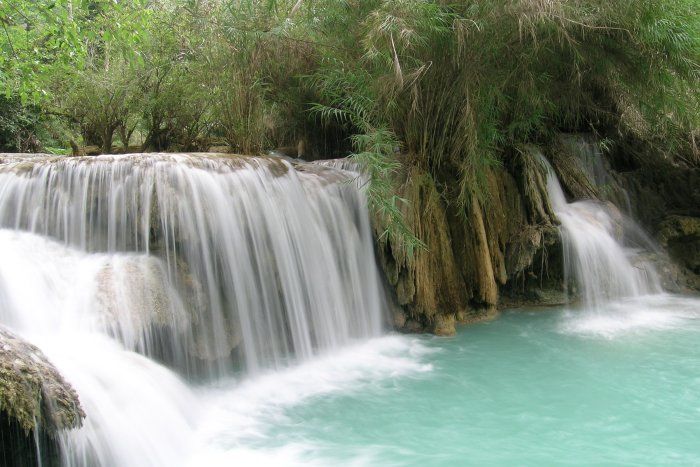 This is a huge market and has enough trinkets and trifles to keep even the least enthusiastic shopper engrossed. From locally made handicrafts, jewelry, lanterns, textiles, clothing, quilts, statues, housewares, and more, you can spend hours floating from shop to shop. Buying is merely one of the things to do here. Just walking around the market, lit up at night with a medley of sounds, smells and sights is an experience unto itself. To make sure your experience doesn't turn awry, carry along your hotel's business card so that a tuk-tuk or taxi driver can understand where you want to go to. Walking around, trying to find your hotel in the dark, though an adventure in its own right can be vaguely unsettling. 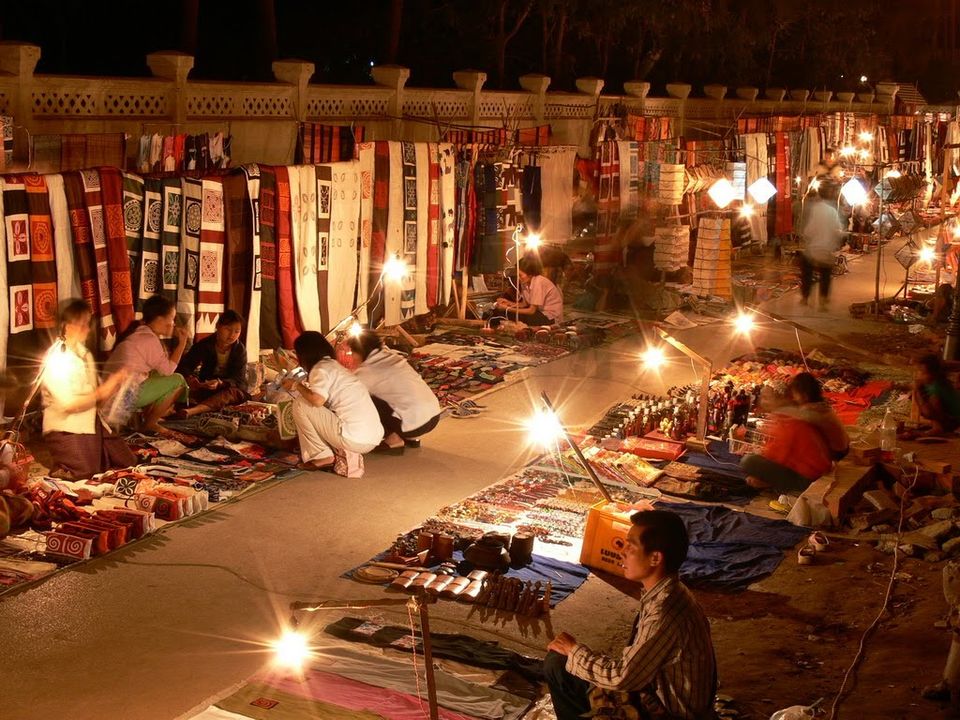 Built in the early 20th Century, the Royal Palace was the residence of the royals until the communists overthrew them in 1975. Subsequently converted into a museum, it is now a place to see glimpses of the history of Laos while also enjoying the lotus ponds, the art, the Crown Jewels of Laos, the Buddhas, and the plush furnishings and decor of the rooms in the old palace, which are still well preserved. 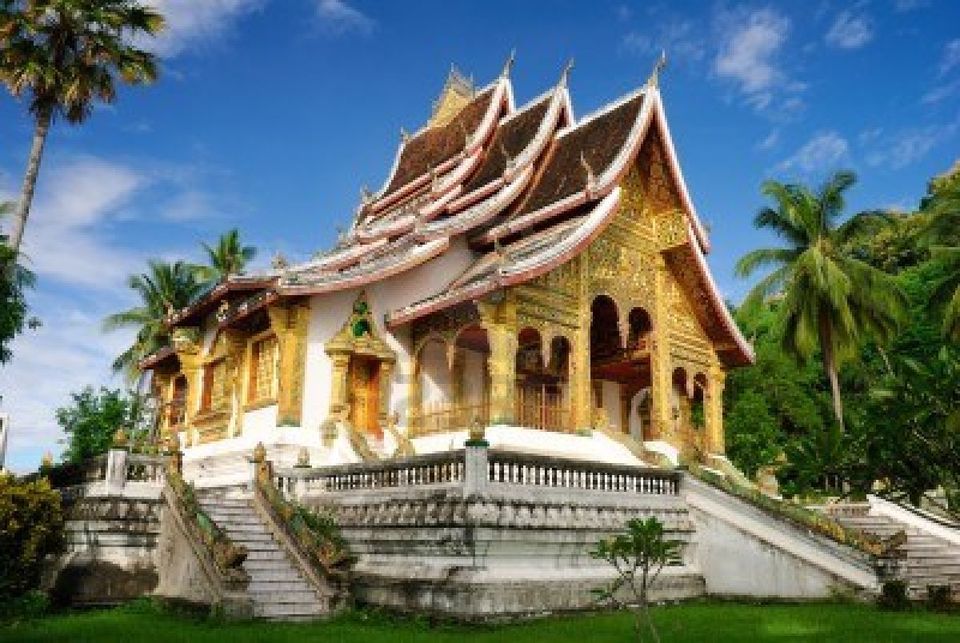