Khe Sanh Combat Base – A Landmark Of Vietnam Dmz 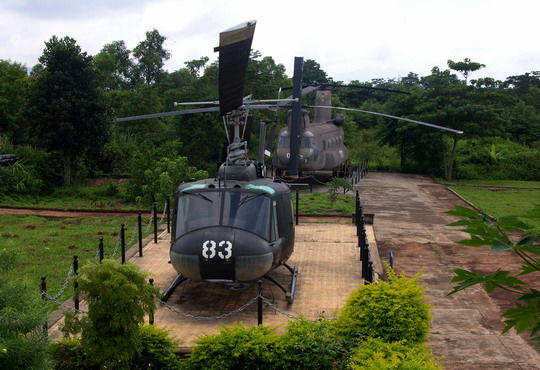 Khe Sanh in Central Vietnam is an important Combat Base of the US army during the Vietnam War. Whether you are a vacationing tourist or a military veteran, Khe Sanh is a must see for anyone on the road through history of Vietnam DMZ Tour.

Located in Quang Tri province with 130km from Hue city, Khe Sanh is the site of the most famous siege which witnessed the bloodiest and devastating battle during the American war in 1968. It was battlefield where 500 Americans, 10,000 North Vietnamese troops and uncounted innocent civilians died because of the impact of 1000kg bombs, napalm, mortar rounds, white phosphorus shells and heavy artillery.

Khe Sanh is now a big peaceful field and home to a small museum displaying historical pictures, collection of military machinery and weapons used in the battles. You will see the markers of the war time here with planes, helicopters, portions of the airstrip and reconstructed bunkers.

Khe Sanh Combat Base is a witness of history. Today it has become one of the most visited war sites. Many people, especially the old soldierstravel here to visit the old battlefield, where they used to fight with their teammates.

To visit Khe Sanh, you can start 1 day tour directly from Hue city or from Dong Ha town for a night stay before if you have a serious interest in this area. There are two routes you can choose to move from Hue to Khe Sanh. The common route is through Quang Tri City on National Highway 1A with around 130 km long. The other route is the long path with around 170km for adventurous travelers. If you are motorbike traveling enthusiasts, this is a remarkable route for you to enjoy the beauty of the spectacular scenery and the sounds of mother nature when passing green hills and mountain as well as get insights of ethnic groups on the way.

For the serious battle historian, you can stay one more night to visit Hamburger Hill and A Shau Special Forces campin A Luoi which is west of Hue and north to Khe Sanh. This is a great option to take the deep insight of Vietnam history.

With more traveling time, just head further north along the Ho Chi Minh Trail to the spectacular caves of the Phong Nha - Ke Bang National Park in Quang Binh Province - rather than double back to Hue. Then you can leave here by taking train or flight from Dong Hoi to your next destination in Vietnam.

Khe Sanh Combat Base was a highlight of Vietnam DMZ Tour. We hope that from our article, you can have an overview of how to travel and what to do here as well as create your own plan to get a sneak peak into the Vietnam history during the period of the war.

SPONSORED
Want to book a similar trip?
I accept the Terms of Use and Privacy Policy of Tripoto.
SPONSORED
Tagged:
#Thị xã Quảng Trị#Quảng Trị#Việt Nam