A view of the Tea Estate on our walk 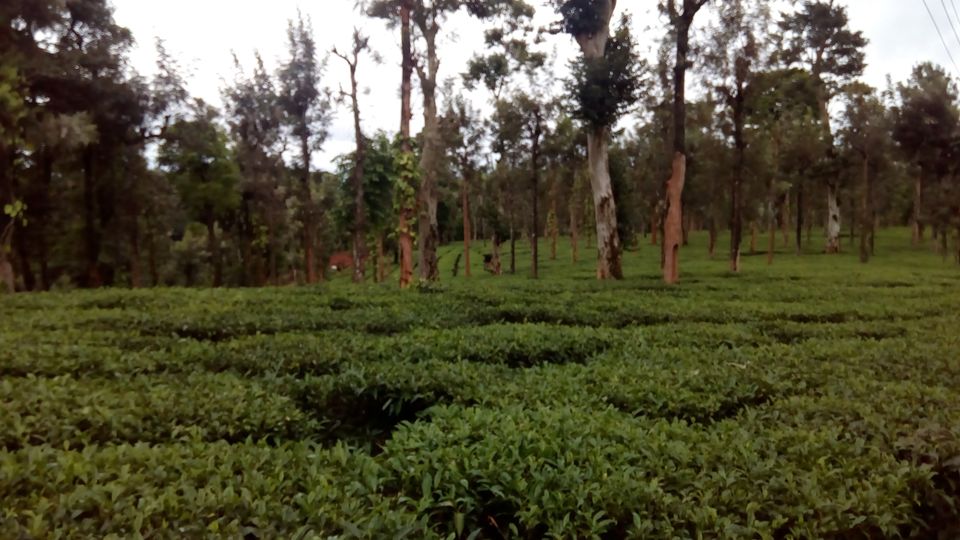 Among the various plantations that I had seen in my travels in Kerala, the sight of seeing a tea estate is just as refreshing as a cup of tea itself.

My friends and I, arrived at Priyadarshini Tea Estate one morning with the rains. As I opened the door of my car at the guest house, Bindu – a tourism manager greeted me with a pleasant ‘Namaskaram’. We were escorted to the dining hall for tea, but we chose to be seated in the portico of the guesthouse to enjoy our cup of tea with biscuits. I had a cup of black tea, to enjoy the freshly brewed tea at its best.

Priyadarshni Tea Estate is a co-operative society that was formed in 1984 for the rehabilitation of the bonded tribal people, particularly from the Paniyar tribe, of Wayanad district. Around 400 tribal people were rehabilitated here from different parts of the district. The tea factory which manufactures CTC tea was established in 1993 with a production capacity of seven lakh kilograms per year. The factory had shut down due to financial reasons in 2005 but from 2007 after a new management had taken over, the output had increased and now it can be considered one of the best tea estates in Wayanad. Priyadarshini Tea Estate also has pride of being the second largest tribal resettlement project in Asia. Apart from manufacturing tea, the Estate is also venturing into tourism by inviting guests to stay at the guest houses in the estate. The factory also boasts of a tea museum which provides interesting facts on the history of tea globally and in India.

The walk to the tea factory is through a part of the tea garden. I was in awe of the beauty of the smooth carpet of bright green with the Silver Oak trees arranged neatly in rows. I could also see tea workers plucking the tea leaves. And as I passed close to a few of the homes of the workers, I could see the children playing and waved out to them. They waved back excitedly as well.

The strong aroma of tea was unavoidable as we approached the factory. Our guide Bipin, who had accompanied us from the guest house, was explaining to us the process of the manufacture of tea as we walked through the factory. It was a very interesting learning for me to know about how CTC Tea is processed, since I do drink tea and have always wondered how it is manufactured.

We were back to the guest house after visiting the factory, a renovated estate bungalow, for a late lunch. The lunch served was simple and very good. In the evening we were supposed to go for a trek on a route on the border of the tea estate and reserve forest, but due to the sighting of a wild elephant in that region by the workers, the trek had been postponed to the next day. Although the sighting of the wild elephant would have added to the thrill of the trek, citing safety concerns, my childish excitement had been diminished.

I was woken up, the next morning, by the sound of heavy rains and the realization that the trek might get cancelled, again. Once the rains had stopped, we did go along the route by jeep. I could see the tea workers getting ready for their day of work. As the jeep drove uphill, I could see the clouds descending on the surrounding hills in that range. We reached the peak of the hill and got off to get enraptured by the beauty of the place. The border where the tea estate ends and the reserve forest begins was very distinct. One side a smooth and well maintained bright green and the other side untamed with varying shades of green. The sun played hide and seek while the group and I stood to admire the beauty. On the drive down, we stopped by a mango tree that was supposedly 300 years old. The tree was very tall with a wide girth. There were no mangoes this time since the tree bears fruit every alternate year.

After a filling breakfast, the group and I bid good bye to the team that had taken good care of us at the guest house.

Till date, I have only driven through tea estates. But staying in one, although it was for one night, was none the less a soothing experience. The sighting of the wild elephant would have definitely added a thrill to my stay.