Settling into Lusaka, Zambia and taking time out with the Welham Boys', I was sated and yet needed more! That is what it is to be a traveller and the Hindi word yayavar -

Nick and I had connected on the internet before I got here. He came designated as Transportation Coordinator for Africa, Zambia and with his help and his merry crew, I headed for a four-day trip to Livingstone, Zambia which is situated south of Lusaka and named after David, the famous explorer. He was the first ever European and a Scot at that to ever get to Africa. Nick drove me to Livingstone which was a five-hour drive. We started early and reached just after lunch time.

I rested at a local lodge where I was greeted by their managing director Mr. Steve Roberts who explained to me the four-day plan!

He also gifted me a kit full of a rechargeable power pack, swipes, sun tan lotion, cleanser and mosquito repellent wristbands. How Taut - I thought!

I was pleased with the care and the attention to detail that The Great African Safari Company here had shown me. I give them a two thumbs up and recommend their service to anyone who comes to Lusaka. If you want the African Safari Experience, you can contact them on +44-7706383498 at the UK or at Zambia on +26-963954056, and Steve's email is steve@greatafrican-safari.com.

Livingstone was turning out to be fun. Not only the people but I was liking the weather also. Just be a bit careful of the mosquitos though and it is advisable to carry suntan lotion.

I started out being a bit irritable in the morning but then Nick’s antics cheered me up and we almost started boxing in our unbridled horseplay. Nick is an animated character and insisted on singing old Hindi songs when we were driving for the Lion Walk!

The location was a setting to train visitors to view lions close up fondling them as it were! I was sat down in a hut surrounded by rangers who were trained in handling lions.

We were given a ten-minute briefing how to approach a lion and pet them and what to do when one approaches them.

Each of us was given a stick to hold as we walked with lions. I went up close, then went on my knees to approach the lion from behind.

Then gently pet the animal as the rangers clicked away. We then walked with the male and the female lion for quite a distance playing with the beasts as if they were simply domesticated pets. This was indeed a unique experience for me and I was not scared one bit. The dusty forest was all that we had as an enclosure as the lions roamed with men in the wild, sometimes rolling on the mud, at times, yawning.

It was also exhausting at times keeping pace with them as they dodged trees and bushes to march forward. We then went to the Makuni Village, an ancient village in this part of the world. It was established 1300 years ago and has a combined population of 7000 people. It has a chief who rules and governs everyone in the village. I strolled amongst the people and the goats who were kept in a special shelter.

Women washing clothes, making fire or picking sticks. Children playing in the mud and raw earth with a sense of joy and freedom.

The ancient village reminded me of villages in Bihar and Rajasthan in India. I was encouraged to check out the curio shop but I gave that a miss as I have no space in my handbag. 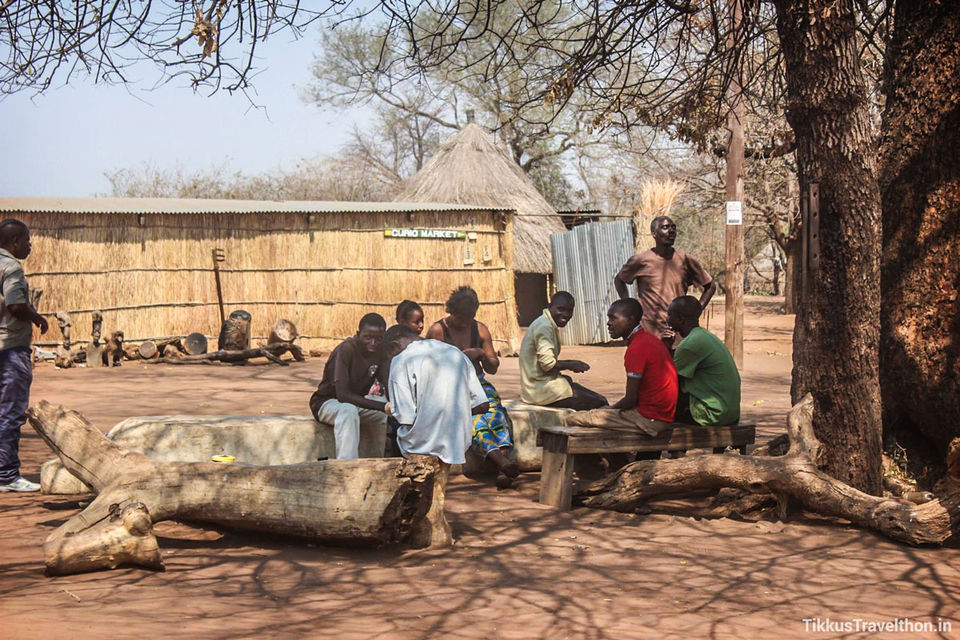 Livingstone, the great explorer and adventurist and I was in his town and man, was I loving Zambia and its warm air. Of course, the chef at my lodge turned out to be an Indian, so I have all the home-made delicacies in the comfort of my room. Keema mattar, dal, chicken kadhai, butter chicken and man, I have been gorging on Indian food in Zambia and as elsewhere in Africa earlier. One of the things that have gotten in the way is that I don't get authentic African food since Indian food is just so easily available and well-liked and well-trafficked!