Walking with the lions in Zambia

We stayed at the Zambezi Waterfront Campground, which had an excellent view of the Zambezi river. I could see the spray from the incredibly impressive Victoria Falls. The river was absolutely beautiful and the bar at the campground was great for relaxing in the evening. The Lion Encounter picked me up from my accommodation in Livingstone and took us to the sanctuary.

The tour started with a lovely breakfast, tea, coffee, juice, and our guides telling us a little bit about the history and philosophy of the reserve. The breakfast was quite enjoyable and was a great way to start a busy morning. It was good to learn that they do conservation work and that the lion walk isn't just a tourist attraction. They rescue lion cubs from poorly run zoos, poachers, and those who have been orphaned in some way. These cubs wouldn't really have much of a chance otherwise. They then start them on the road to re-introduction into the wild. The cubs are hand raised on a large sanctuary. They invite people to interact with the cubs and learn about their conservation; the cubs are not collared or drugged.

Re-introduction is a multi-generational process. The cubs that have been rescued are raised by humans until they are young adults. They are taught to hunt and are provided with meals when necessary. Once they are young adults they are released into a large, supervised reserve where they are free to hunt, form prides, and generally be lions. If they start to struggle or starve, the rangers intervene. The cubs born to these lions are then allowed to be raised by the pride with minimal human interaction. These cubs are much more wild and have a much better chance at surviving in the wild. They are allowed to migrate into a larger and much less supervised reserve. The third generation of cubs that is born to these lions is then completely wild with no human involvement whatsoever. 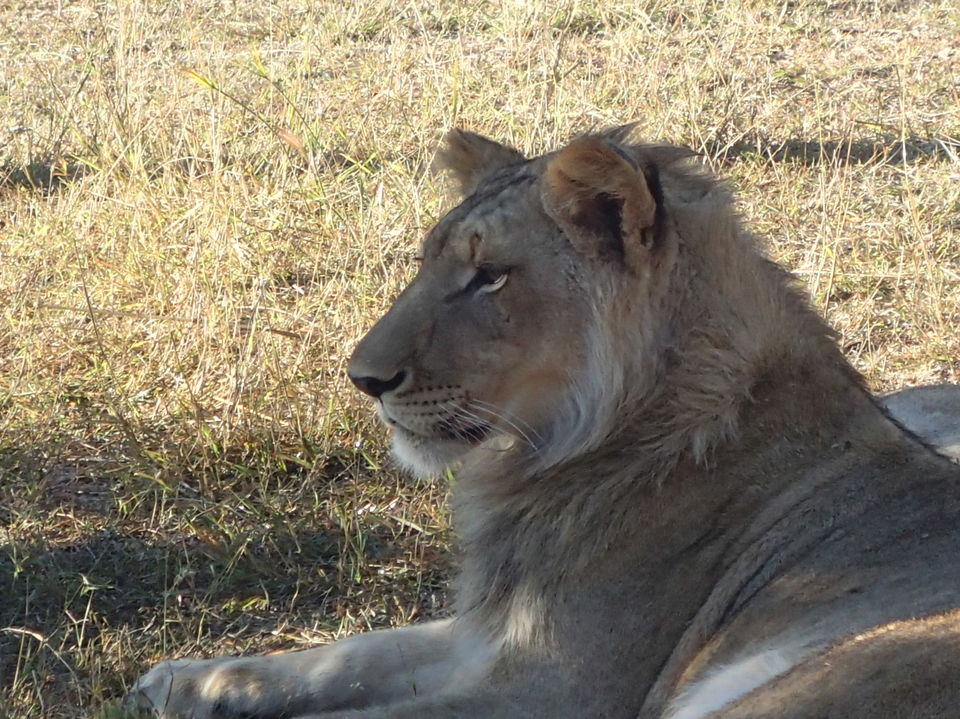 Once the group had learned about the history and intentions the reserve, we were loaded back onto the bus and taken to the bush where we would start our walk. There was a brief safety orientation, including don't wear anything bright, no skirts, nothing dangling like scarves or large necklaces, and be mindful of the lions at all times. Everyone was then handed a stick, which was to distract the lion if they started to be naughty or were giving us a 'naughty look'. A naughty look, of course, is starting to look at us humans as either something to play with or as something to eat! When they told us that, I was a little bit nervous; what would this flimsy little bamboo stick really do to distract a 100 pound lion?

The guide then led the group a little bit further and there were suddenly lions! I was so distracted with the others in the group, trying not to hit anyone with the stick, and just generally looking around that I didn't notice them at first. It made me jump to realize just how close we suddenly were to these wild and amazing animals. They definitely blend into the tall grasses quite well and I was really glad that we knew they were there. If I'd been walking in the bush I think I might have been dinner for them with how slow I was to notice them. It was a relatively small group, around 8-10 people, and we had 3 teenaged lions accompanying us, along with 3 guides, a couple of handlers, and 3 conservation officers there to protect the tourists from wild animals. I have to say, after they were introduced, I never saw the conservation officers. They vanished into the bush around us and did a very good job of scouting.

The lions were absolutely beautiful to see. They also very definitely behaved like cats. I have a small housecat at home and one of her favourite things to do is to walk up to someone and then just flop at their feet. Definitely not graceful when she does it. It is also definitely not graceful when a full sized lion does the exact same thing, although he does it loudly enough to make an audible thud when he landed. It was quite entertaining to see and made me laugh. 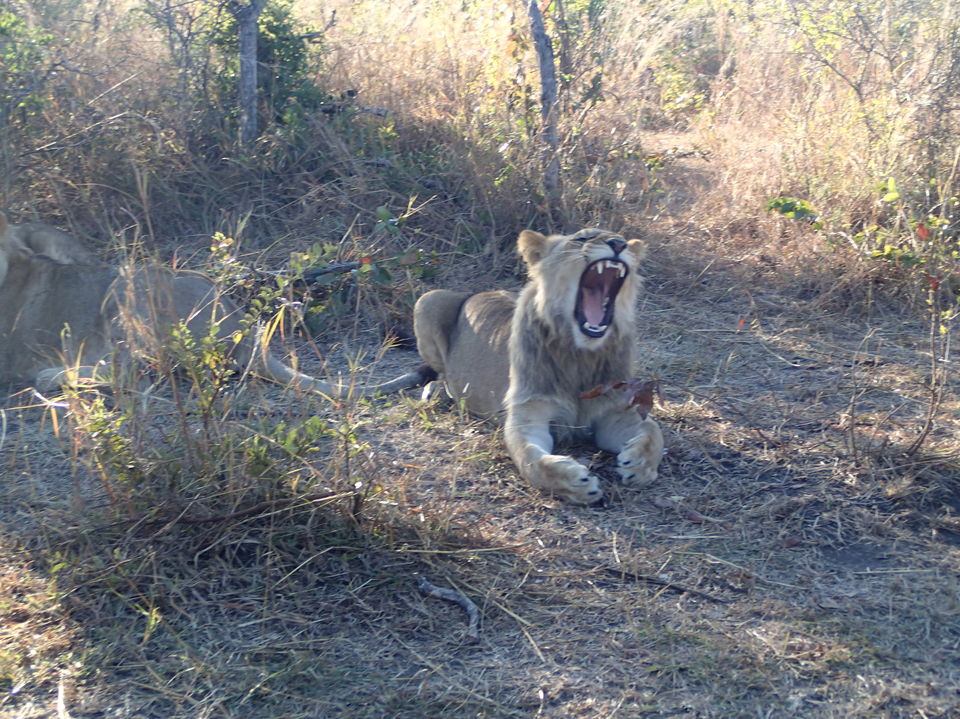 We walked with the lions for about 45 minutes, and then the guides gave us an opportunity to stand close to lions and have our photos taken with them. Sometimes it is possible to pet them at this point, but we were asked not to since the three lions were feeling quite energetic and playful. The handlers did a very good job of making me feel safe, even though I was only feet away from a wild lion. They seemed to know the lions moods quite well and knew when it was safe to approach and when it wasn't. I was a little bit nervous to go so close to them when they were being so lively and was quite glad to have my husband with me. Standing so close to the lions was an absolutely incredible experience; they are so beautiful and majestic. 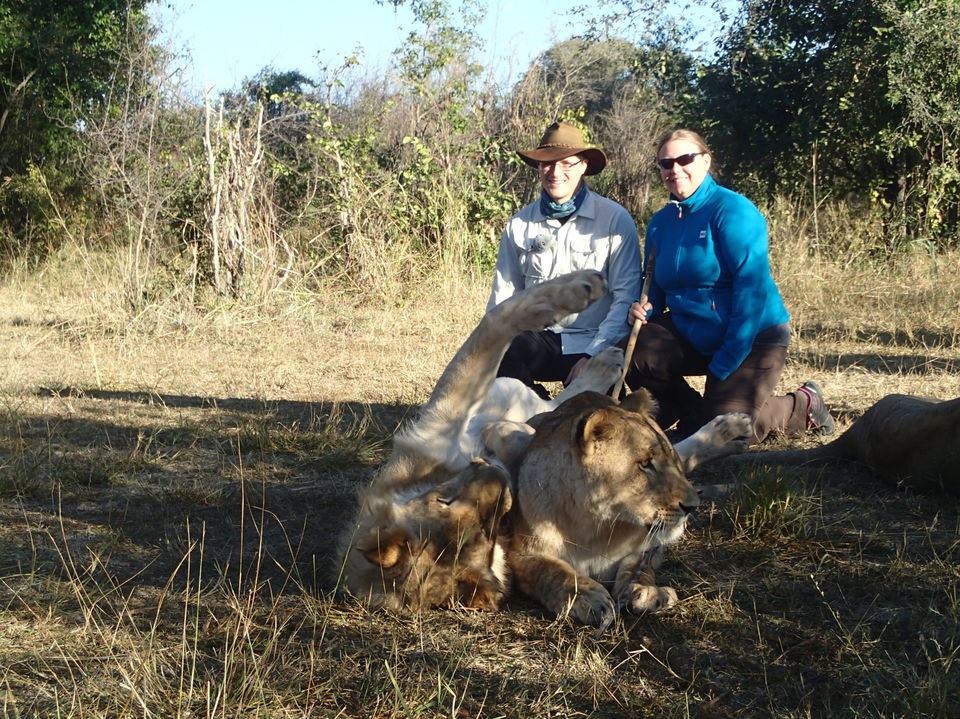 It was quite a lot of fun watching the lions play, run around, climb trees, and chase each other into the water. I thought most cats hate water, but these three were quite happy playing in the river. The one that decided to climb the tree was also extremely clumsy climbing back down, which was really funny to watch. It was a very different experience from seeing bored lions in the zoo; it gave me a lot more respect for their majesty.

After the walk we were driven back to the lodge, where we had a chance to view the video that the company had created of our walk and to purchase the pictures that they had taken of the lions and of us. The video was quite well done and was certainly worth purchasing. They also provided us with more coffee, tea, juice, and snacks before taking everyone in the van back to our lodge. It was certainly a very enjoyable morning!