Overcome by writhing wanderlust to get away from the hustles of the city life, and the yearning to stretch my eyes to the farthest building miles away, last November I packed my bags with a friend to set off to Ajmer and Jaipur. Who would have known the dunes of the desert and the cries of the ancient forts would turn me into a storyteller..

Ajmer, is the fifth largest city of Rajasthan and a major pilgrimage site for the shrine of the Sufi saint Khwaja Moinuddin Chisthi . I had decided to pay the shrine a visit to kneel in prayer before Ajmer Baba in reverence and in gratitude for granting my prayers. Every day, thousands like me flock to Ajmer to visit the shrine from all over the country. It is believed that one who asks the Saint for blessings has never been denied. The streets of Ajmer start bustling with people and activities as early as 6am. The shrine of Ajmer Baba is at a walking distance from Ajmer railway station and most people make way to the shrine as soon as they land at Ajmer.

We reached Ajmer Station at 6.30 am and made our way to the hotels and lodges situated very close to the shrine. The lodging is very cheap as compared to Mumbai with tariff for rooms starting at a price as low as Rs.500. One’s gastronomic fantasies also come true at Ajmer as an inescapable aura of mouth-watering delights engulf your senses at every nook and corner of this small city. In our one day stay at Ajmer, we visited the shrine of Ajmer Baba, ate a scrumptious meal at a local restaurant at peanut’s worth and basked in the divinity that subtly floats in the air over the busy streets of Ajmer.

Must eat – Mutton preparations from the local food stalls and restaurants.

Must visit- The local shopping stalls, a nearby fort ruin ( 1km walk from the Dargah)

The Dargah for evening Kawalli sessions

After having spent a day in Ajmer , we made way to Jaipur, the pink city of India, the following morning. There are public as well as private modes of transport to Jaipur from Ajmer. The private cabs charge anywhere between 300-500 whereas a bus ticket would cost one no more than Rs.60 each. Conveniently so , we took a bus to Jaipur from the local bus stop at Ajmer. Our 2 hours long morning bus ride, energized our senses with beautiful street homes and an air of mysterious enigma as we crossed villages into cities that we would now call home or the next 2 days. One cannot however expect to bathe in the culture and history of Jaipur in anything less than a week (minimum). The city is huge and it’s main tourist attractions are spread extensively all over the city. One can only hope to gather as much magic as one might while at Jaipur and yet never be completely satiated. Having arrived at the hotel around noon time , we committed the mistake of taking things slow with only a day and a half in hand. Post lunch we set out in search of an auto that might take us around the city. We found one soon enough and the driver agreed to show us 3 tourist spots for Rs.500. He also pushed that we hurry if we wished to get back before it got too late, or too cold.

On our second and last day at Jaipur, we had to make the tough choices of choosing one fort over another. It’s only when one had been to Jaipur that one would realize that although most of the forts and monuments were built around the same time and have the same intricacies in structure and detail, but each is so individually magical in it’s own right that the city never fails to enchant any tourist with a host of their forts.

Places we visited in Jaipur-

The Amer Fort, situated in Amber, 11 kilometers from Jaipur, is one of the most famous forts of Rajasthan. Amer, originally, was the capital of the state before Jaipur. It is an old fort, built in 1592 by Raja Man Singh. This fort is also very popularly known as the Amer Palace. The Amer Fort was built in red sandstone and marble and the Maotha Lake adds a certain charm to the entire Fort. Though the fort is quite old and may even look so from the outside, it is beautiful on the inside and boasts of various buildings of prominence like the 'Diwan-i-Aam', the 'Sheesh Mahal' and even the 'Sukh Mahal'. The Amer Fort has influences of both Hindu and Muslim architecture. This fort also has the 'Shila Devi' Temple and the 'Ganesh Pol' which is a gate that leads to the private palaces of the kings. The fort was recently seen on the big screen in ‘Bajirao Mastani’.

The renowned 'Palace Of The Winds', or Hawa Mahal, is one of the prominent tourist attractions in Jaipur city. Located in the heart of Jaipur, this beautiful five-storey palace was constructed in 1799 by Maharaja Sawai Pratap Singh who belonged to Kachhwaha Rajput dynasty. The main architect of this palace built of red and pink sandstone, is Lal Chand Ustad and the palace is believed to have been constructed in the form of the crown of Krishna, the Hindu god. Considered as an embodiment of Rajputana architecture, the main highlight of Hawa Mahal is its pyramid shape and its 953 windows or 'Jharokhas' which are decorated with intricate designs. The main intention behind the construction of the Mahal was to facilitate the royal women and provide them a view of everyday life through the windows, as they never appeared in public.

Nahargarh Fort, along with other two forts viz., Amer Fort and Jaigarh Fort, once formed a strong defense for Jaipur city. Built by Maharaja Sawai Jai Singh II in 1734, this fort was originally named Sudarshangarh Fort. Later, it was given a new name, Nahargarh which means 'abode of tigers'. Located in one of the oldest mountain ranges of the world, the Aravalli Hills, this fort gives you a breathtaking view of the scenic surroundings. One of the major tourist attractions of Jaipur, Nahargarh Fort is noted for its extended wall which connects it to the Jaigarh Fort.

Jal Mahal is considered as one of the most beautiful architectural palace that was built with the Mughal and Rajput craftsmanship. The palace provides a charming view of the Nahargarh hills that border it. Jal Mahal, that means water palace in English, is located in the center of the lake Man Sagar. The complete palace is made of red stone and is 5 story high. The 4 floors of the palace stay under the water and it is only the 5th floor that is visible. There are 4 chattris on all the four corners of the palace. These are octagonal in shape. The fort has some of the exquisite marble cravings which denotes the royal touch and the palace also has twenty pillars which are the cenotaph of the royal family of Raja Jai Singh. The lake, as well as the place, was renovated by Maharaja Jai Singh 2 in the 18th century.

Though unfortunately our trip was cut short due to time constraints and we didn’t see half of Jaipur, the city’s ethereal charm and historical heritage and mystique have imprinted themselves on our senses for life. It’s only when you move out of the city that you’ve called home for most of your life that you realize that as a traveler , one shouldn’t ever expect or judge a distant land by the rules of land back home. Jaipur surprised us in ways we never imagined and if you have the time and desire to lose yourselves in the tales of this old city, pack your bags and go visit Jaipur. The world is huge, and you might want to see the horizon before it got dark…

Other places to see in Jaipur-

Food to try in Jaipur-

Rajasthani Thali at any local restaurant

Lunch at a palace (Nahargarh Fort)

The Amer Fort, situated in Amber, 11 kilometers from Jaipur, is one of the most famous forts of Rajasthan. Amer, originally, was the capital of the state before Jaipur. It is an old fort, built in 1592 by Raja Man Singh. This fort is also very popularly known as the Amer Palace. 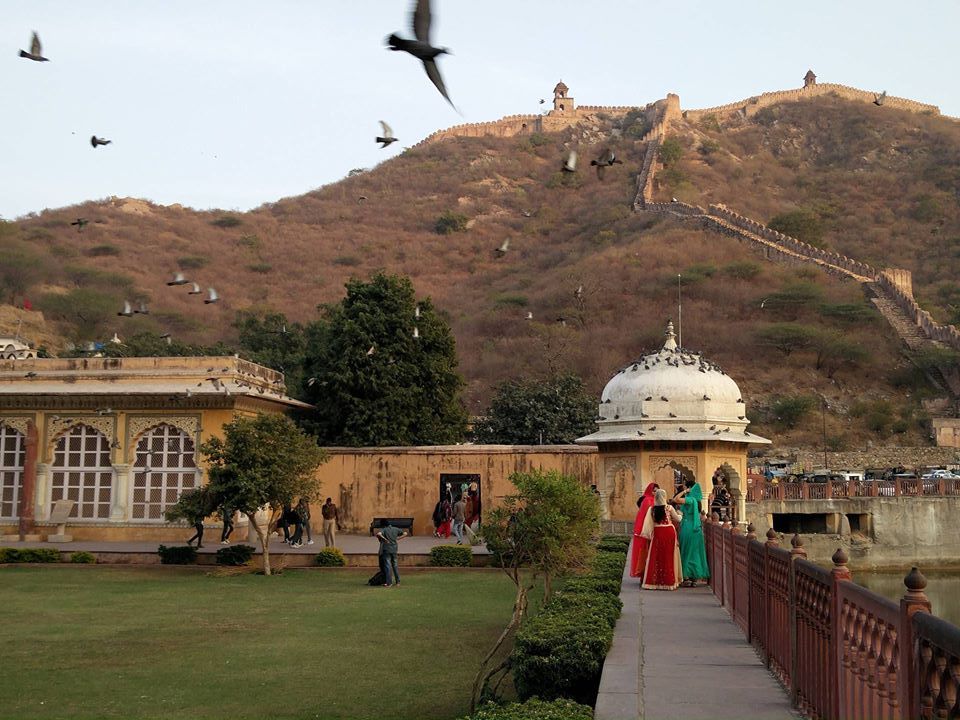