A Honeymoon in Bhutan

We entered Bhutan via a direct flight from Delhi to Paro. On the way there's this spectacular view of the Mount Everest (which the pilot announces when we're approaching the mountain). A little problem in our case was, the Everest comes on the left side of the aircraft while going from Delhi. So while getting your boarding pass, it would be great if you ask for seats on ABC side of the aisle. That ways you won't have to jump seats and run around the craft to get some pictures of the mighty mountain!

7 days in the beautiful country with beautiful people were spent without us having a clue as to where the time was flying! While all the major places we visited are mentioned in the itinerary below, here are a few peculiar things we witnessed as part of the Bhutanese 'culture' or the 'way of doing things'.

All in all, Bhutan is an amazing place to be! Very beautiful, greenery all around (depending on the time of year of course), wonderful people, awfully peaceful at night, refreshing breeze all across the country, law abiding citizens and ardent believers of the King.

Go when you get the chance. My wishes for your safe and successful journey!

The Peaceful Resort is located on a hill about 5 km (uphill) from main Thimpu city. The place has a lovely view of the hills and nice rooms with wooden flooring and lots of lights. The place isn't very expensive either (approx. INR 3k per night for a decent size room). A good place to check out if you want to live away from the city.Keep in mind the cab would charge you INR 120 every time you go uphill from the main city market to the resort.

This place is a set of beautiful cottages near the Punatsangchhu river in the Wangdue district. The river view from the cottages and the restaurant is quite amazing! The lady managing the hotel is a well educated smart lady and an experienced traveler herself. She gave us the 'honeymoon surprise' by giving us a river side cottage and by decorating our room! 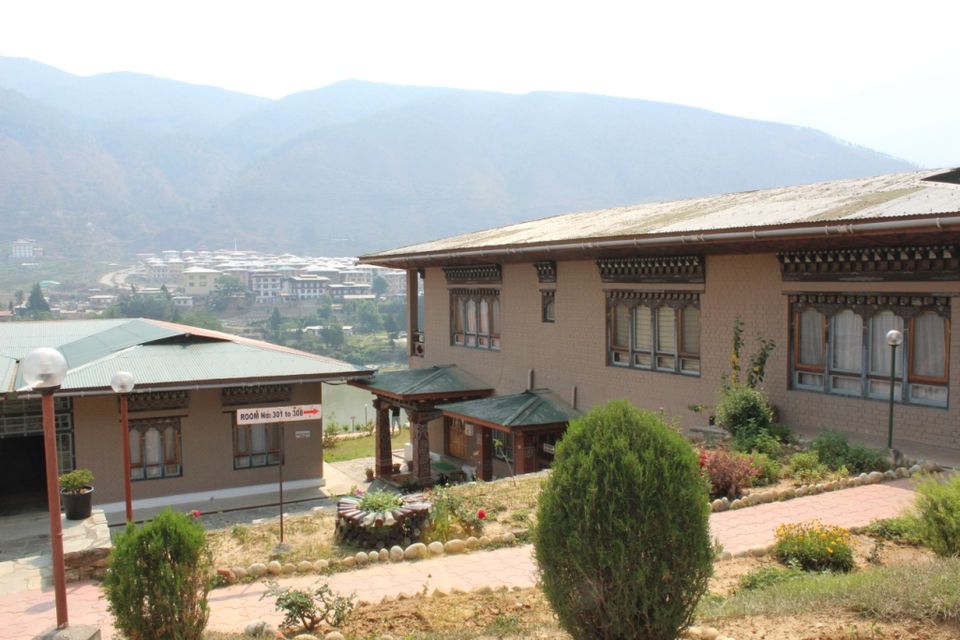 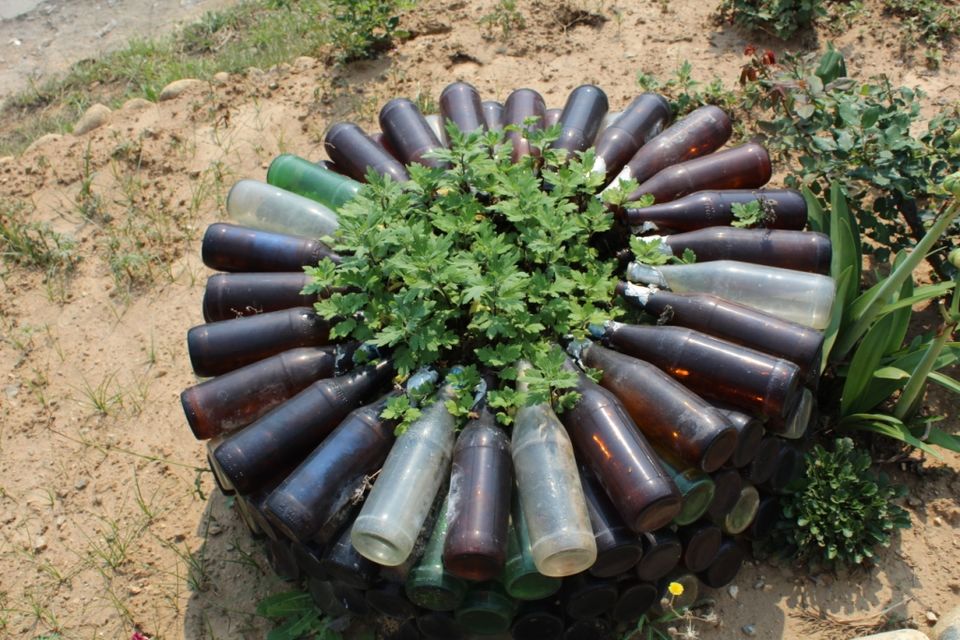 Constructed in the year 1974 for the coronation of the Fourth King of Bhutan, this hotel has that flavor of Bhutanese architecture. What makes this place magnificent is that it is built on 28 acres of land on top of a hill and has an amazing view of the entire city of Paro. Lovely place to stay.Note: This place is also located on a hill and cabs from Paro usually cost around Rs 100 to drop.

This cafe is located on the main street of Thimpu and is definitely a place to go. The place has a very nice ambience of a coffee shop. Has a working wi-fi to surf the internet. Food and drinks are good and inexpensive. If you're lucky, who knows you may get a gulp of local Druk beer too ;) 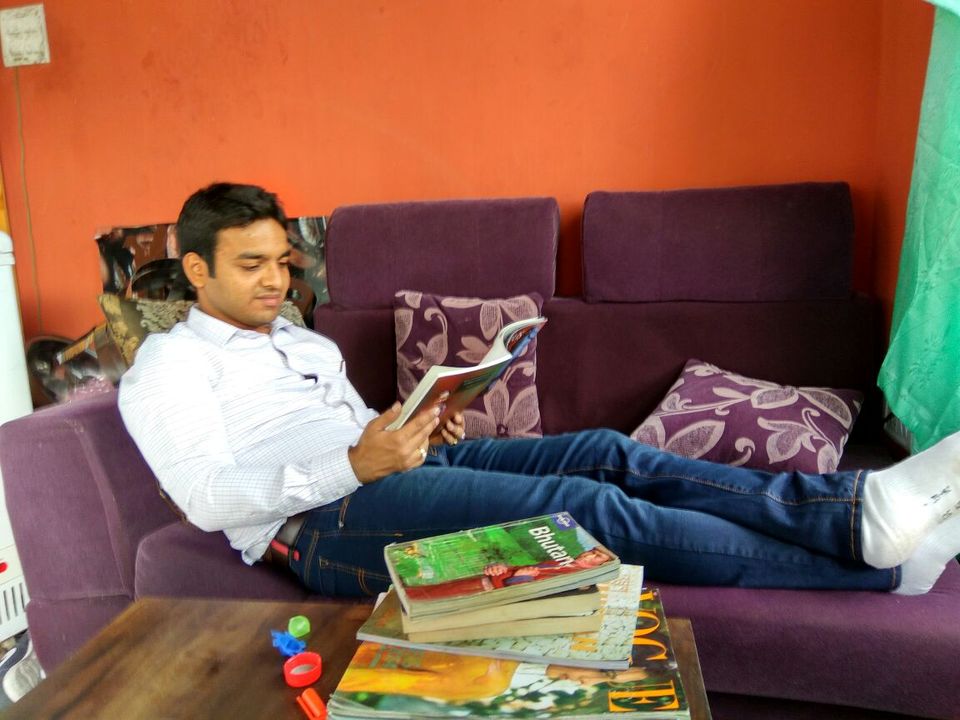 There is a unique 400 year old tradition in Bhutan of celebrating a Phallus (you heard me right) and everything related to it. The tradition began with a Tibetan Monk called Drukpa Kunley (also known as the Divine Madman). Wiki says, "He was known for his crazy methods of enlightening other beings, mostly women, which earned him the title "The Saint of 5,000 Women"". You can imagine the range of his sexual forays!He is celebrated in a lot of places of the country with Phallus (Bhutanese pronunciation, Phaloos) painted on the walls of houses, at restaurants, used as clothes hanger, sold as key chains or even as long thick wooden Phalluses sold across the country at handicrafts stores.But the idea has little to do with sex and more to do with fertility and good fortune. This is also why at many places people of Bhutan celebrate Phallus festivals every year.If you go to Bhutan, this would be my top souvenir recommendation. Rest almost everything can be found at other places. This I found to be very specific to the country. 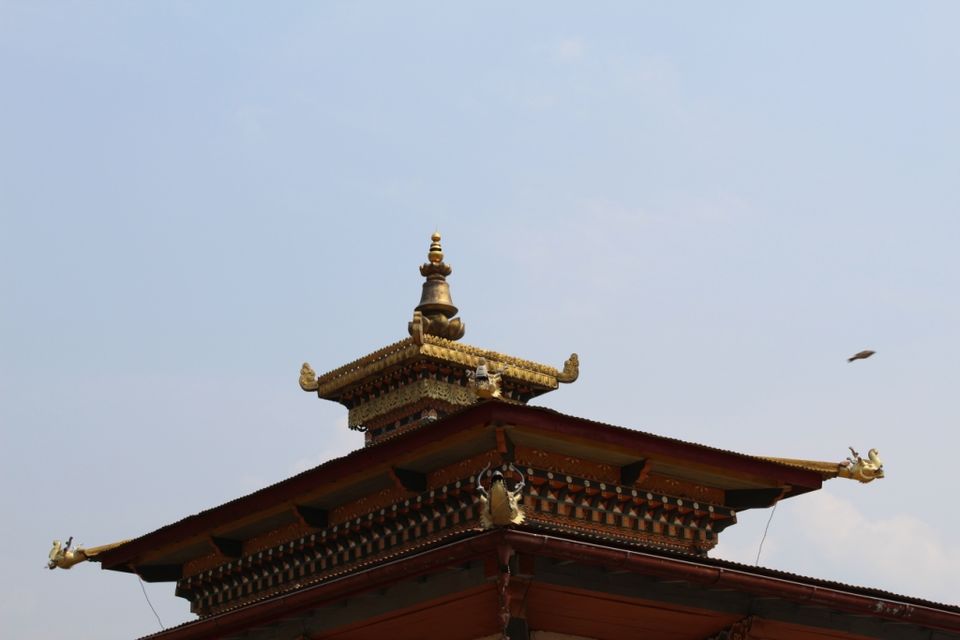 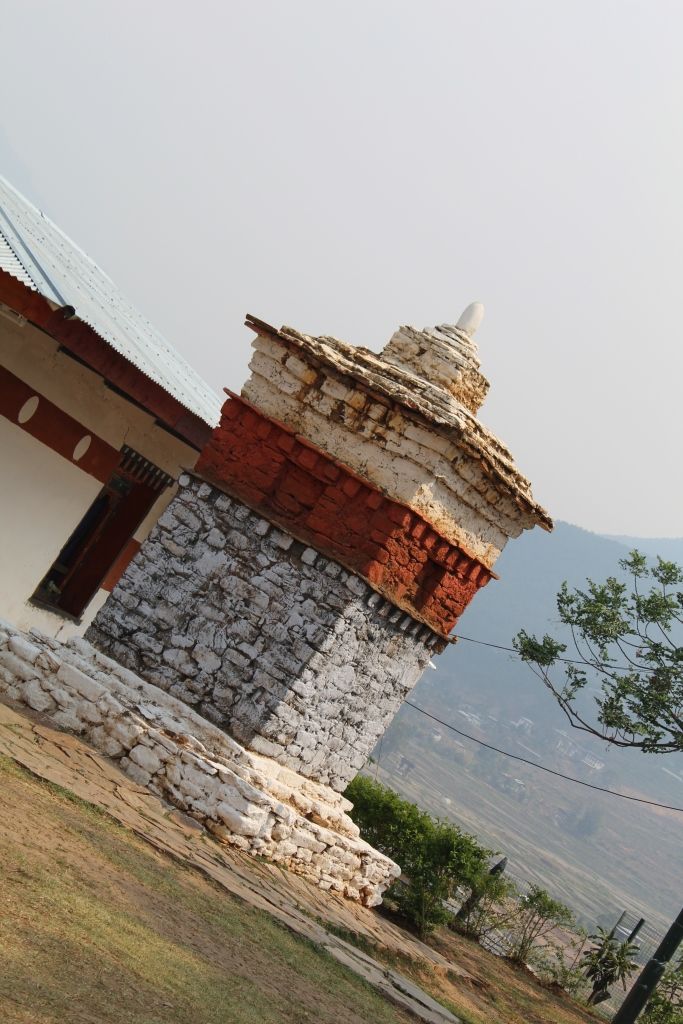 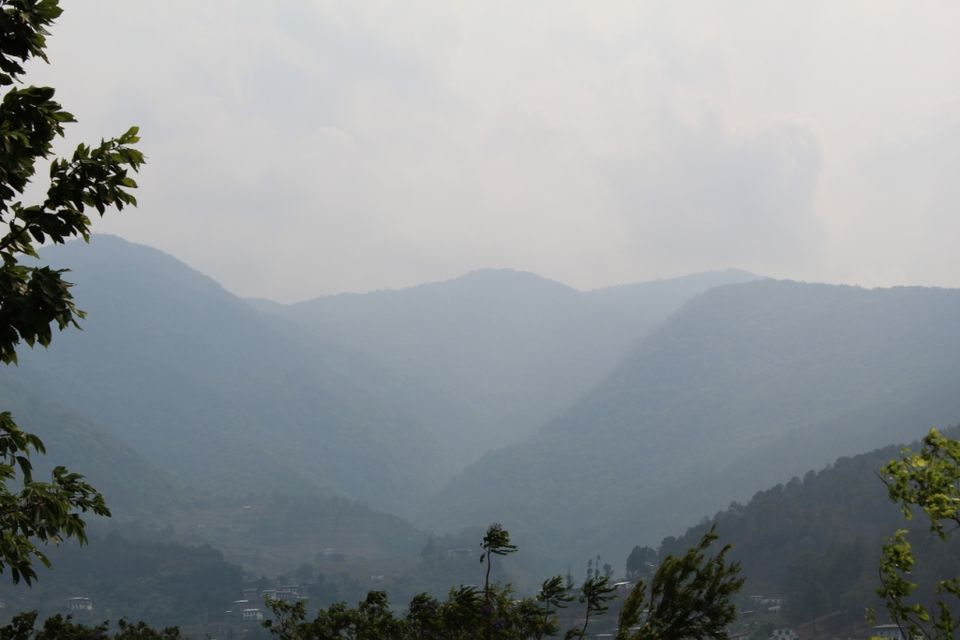 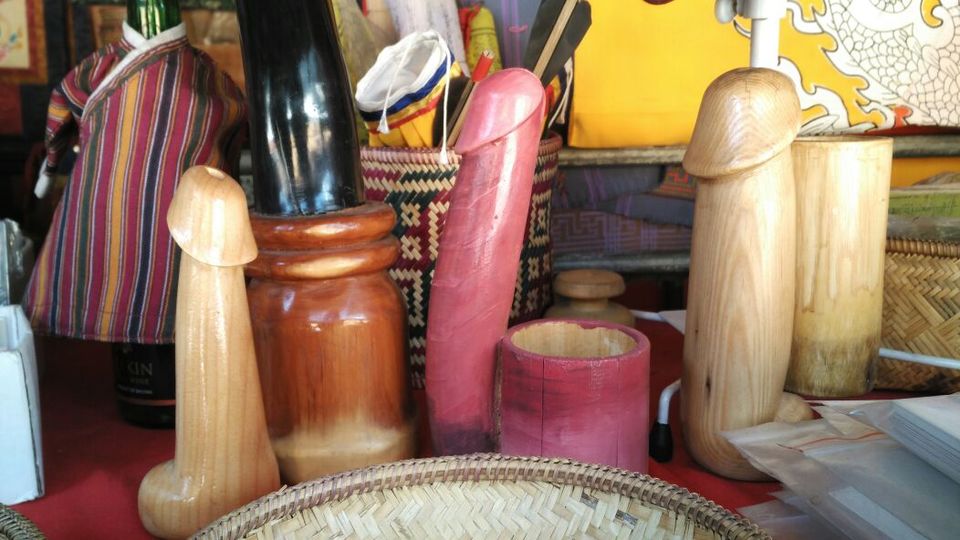 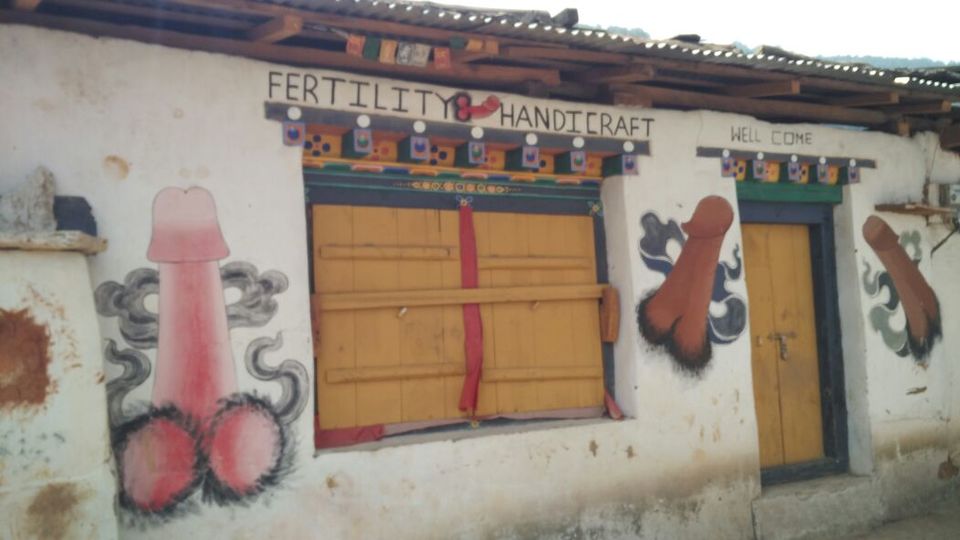 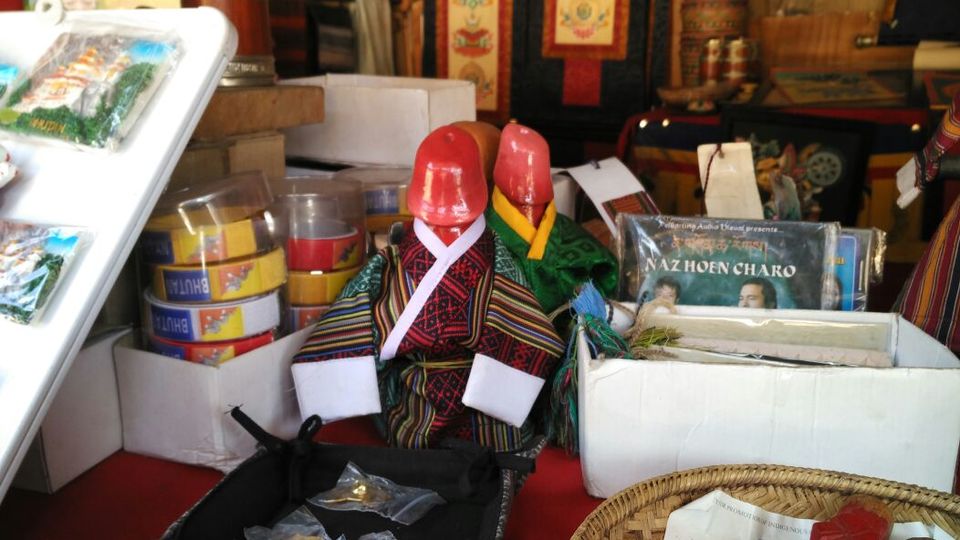 Bhutan has a collection of Forts, all of similar architecture and built for similar purposes. Among them, Punakha Fort is definitely the most beautiful one.The forts of Bhutan are all constructed with a watch tower at the center, the Administration or the Government Body on one side and the Monk body on the other. With close to 40% of total population as Monks and Nuns, the country definitely needs a formal place for the monk body to conduct their rites and gatherings. Forts serve the purpose just right.The Punakha Fort, situated at the tip of the meeting point of two rivers, located on the base of two hills forming the shape of a sitting elephant, and surrounded by beautiful Purple trees, holds a spectacular view for the naked human eye. The innards of the Fort has a beautiful architecture and a huge meeting hall on the monk side which has this amazing deafening silence in it's atmosphere, a perfect place to sit down and meditate.Must visit, purely for delighting one's eyes with beauty and magnanimity! 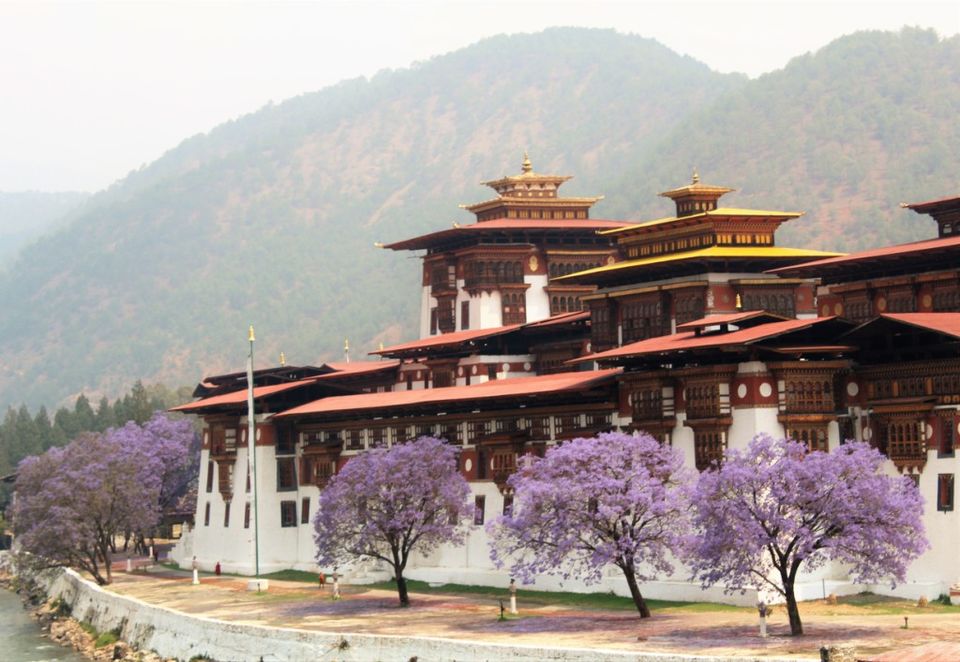 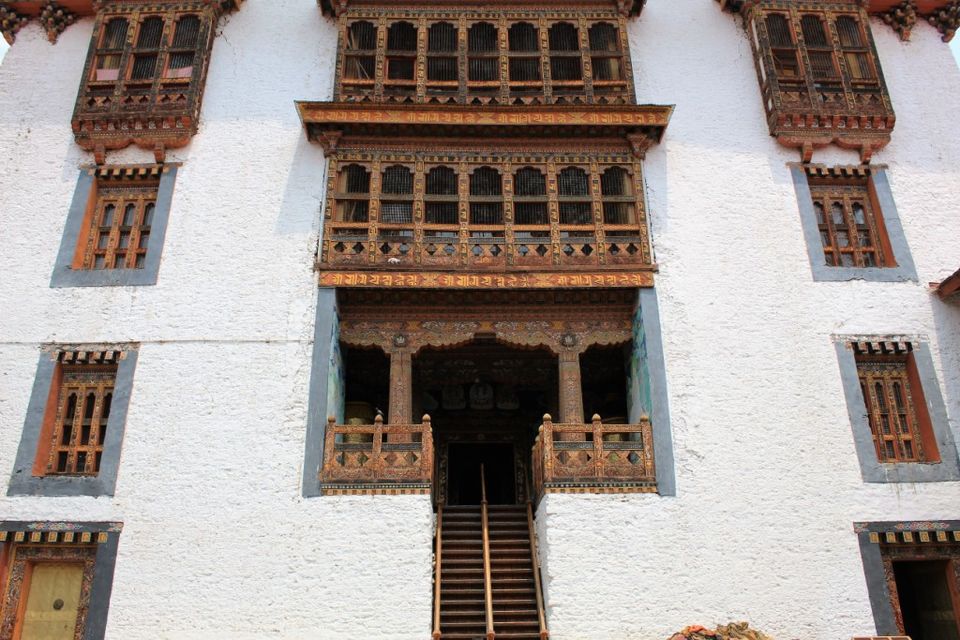 Located on the other side of the river at the Punatsangchhu cottages is the Bajo Town. On one of our days at the Puna cottages, we hitchhiked to the town in the evening. It's a beautiful small town, designed in the form of a + sign with a park at the center and the houses and shops located on all sides. The evening breeze was just too awesome! It felt like fresh air touching the face, the hands and all the other parts of the body. It is one of those towns which closes at 9 in the night and all the park benches get empty for the air to rest on them.If you go to Puna cottages, you'd naturally feel like going to this adjacent amazingly lit Bajo Town! 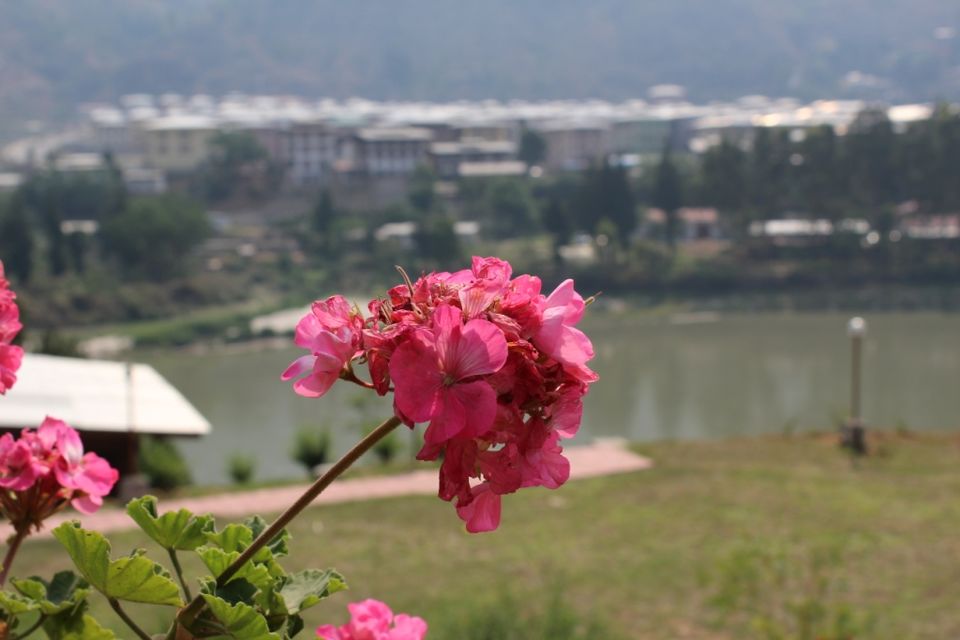 There at the Bajo Town, we were looking for a place for dinner and upon asking a few people, we were directed to this small Hotel-cum-Restaurant with a strange name.As we entered the dining place, we saw a group of monks having dinner on a table. A nice sounding lady came to us and seeing we were Indians, began to offer Indian dishes. She prepared home cooked Dal Chawal with a Potato vegetable dish. Everything including the vegetables were cooked then and there in the adjoining kitchen and tasted amazingly well! Home cooked food finally! And the prices... less than INR 250 for the both of us for the plateful of food of all types.Definitely a place to check out! 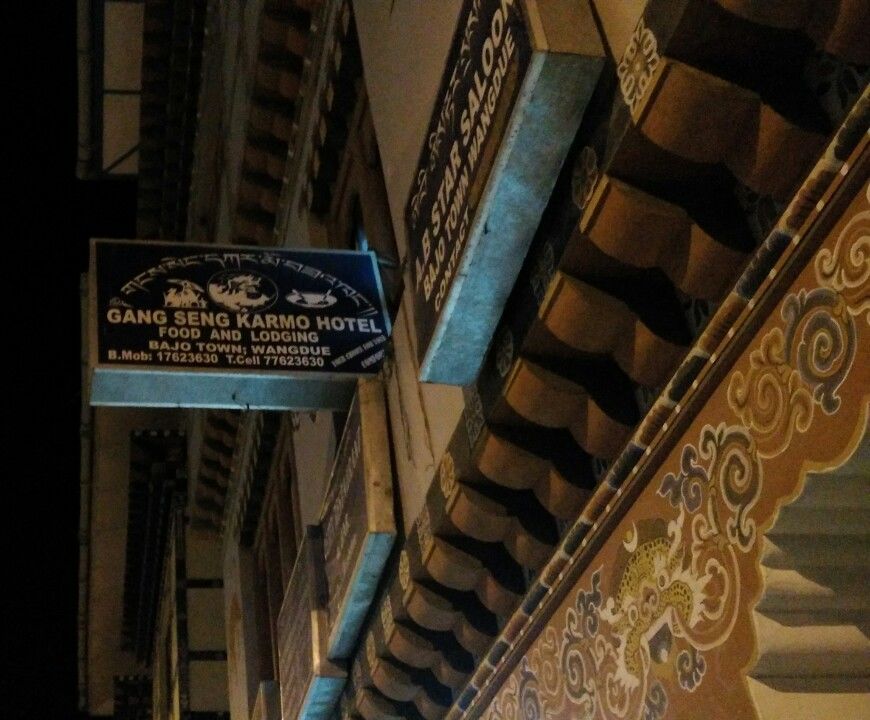 This museum has everything, from ancient artifacts to statues of spiritual leaders to old utensils used for cooking to all things of cultural and historical importance. But the thing I liked the most was their collection of birds and animals found in Bhutan. Instead of having pictures, they had kept actual animal bodies (stuffed with some preservative) in the hall of the museum. The leopards, the birds, the ground animals like Bulls, Yak, Takin and even a Crocodile. The real skin brings them alive and every time one looks in their eyes, it gives a feeling that they are still among us.Beautiful hall of display of Bhutanese animals at the Museum.

Although not as beautiful as the Punakha Fort, yet the Paro Fort is equally good. Besides, it is one of very few things to watch in Paro and since everyone going to Bhutan ends up in Paro city for one reason or the other, visiting the Paro Fort is inevitable. 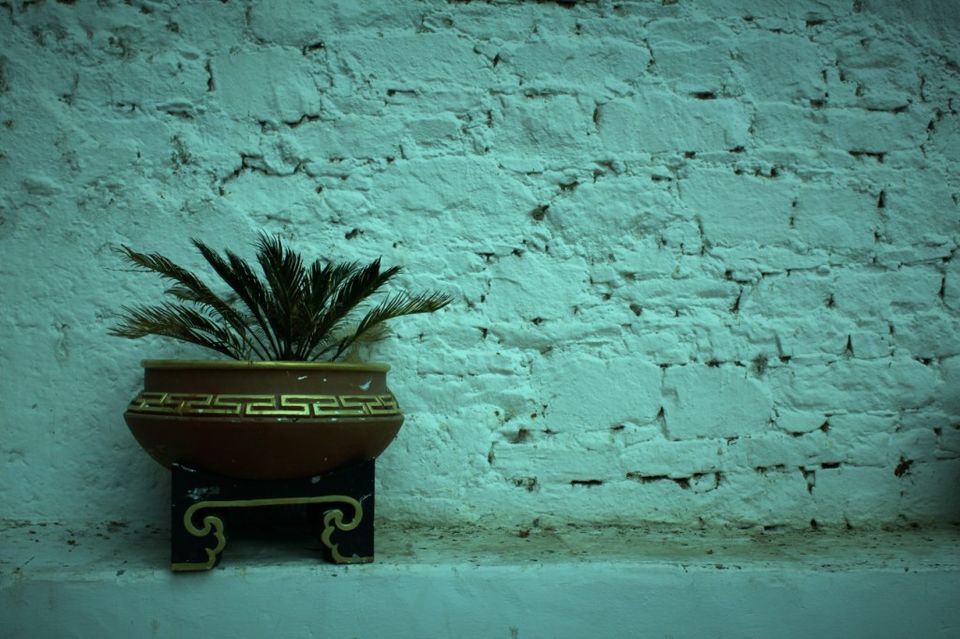 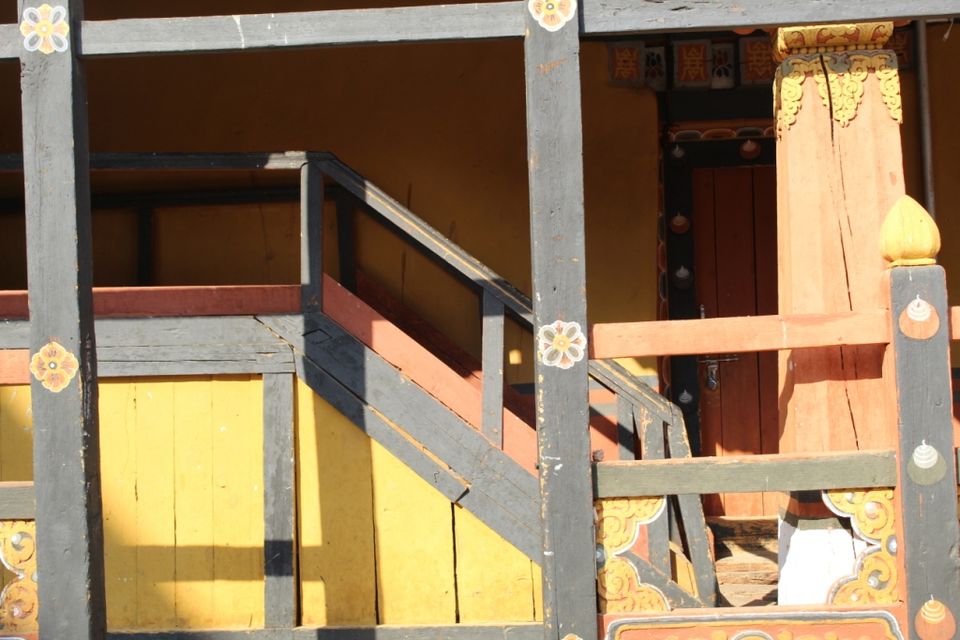 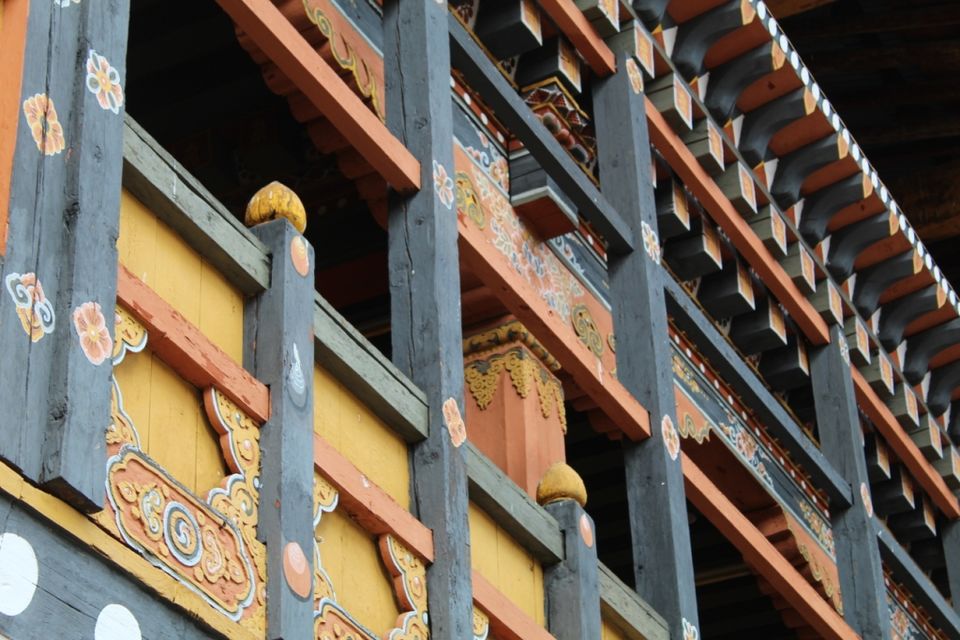 For all those who have done the hike for the Vaishno Devi temple in Jammu, India, here's a familiar site for you to experience!Tiger's Nest is the most visited place in Bhutan, and there's a reason for it. Every day multitude of people from across the world come for the (nearly) 2 hour trek to the Tiger's Nest to witness the beautiful temples located on the hilltop.A great place to meet new people, make friends on the way (if you're up for it), enjoy the view from the Valley Point (approx. 10% from Taktsang), get an opportunity to climb 900 stairs (beginning from the Valley Point) and experience the beauty the place has to offer.What I didn't like however was that although there is a cafe at the midpoint for one to have food and beverages (alcohol included), the cafe only had a Buffet lunch at INR 475 and had nothing else to offer. A lot of foreigners were of course enjoying a sumptuous meal while on their way back.It is only at such sights that I end up missing India. Who knows what kind of Pav Bhaji, road side Chat, Paratha, Rajma Chawal and what not vendors would have been there serving their delicacies if it was India! But what was perhaps the most beautiful thing I saw at the place was this 82 year old Tibetan lady doing the entire walk uphill on her own using just a cane and the support of her granddaughter. Kudos to the human spirit which at times act as an inspiration for all of us to make sure that we keep walking. 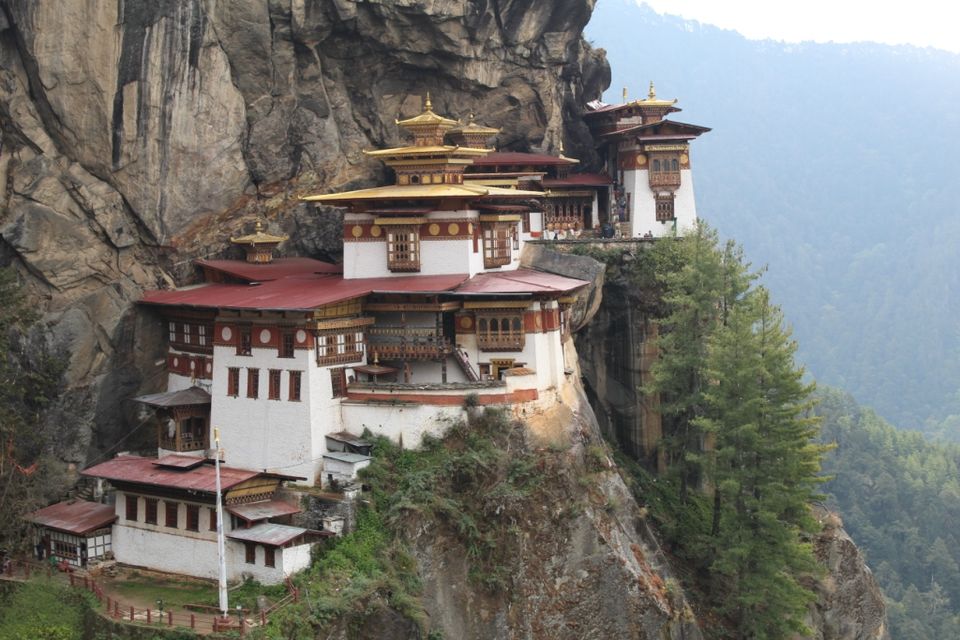 Among the most beautiful scenes we came across was this Exhibition put by a Bhutanese man who has been doing art since childhood and is now also running a business separately apart from making paintings and putting them on Exhibition. The paintings were exquisite and ranged from themes related to Bhutanese architecture, the Gods & the Buddha, Human Emotions and abstract concepts and relations. It was a spectacular display of talent and hard work at which was put on the walls of that place. The Exhibition was only for a week and ended by the time we left the country. 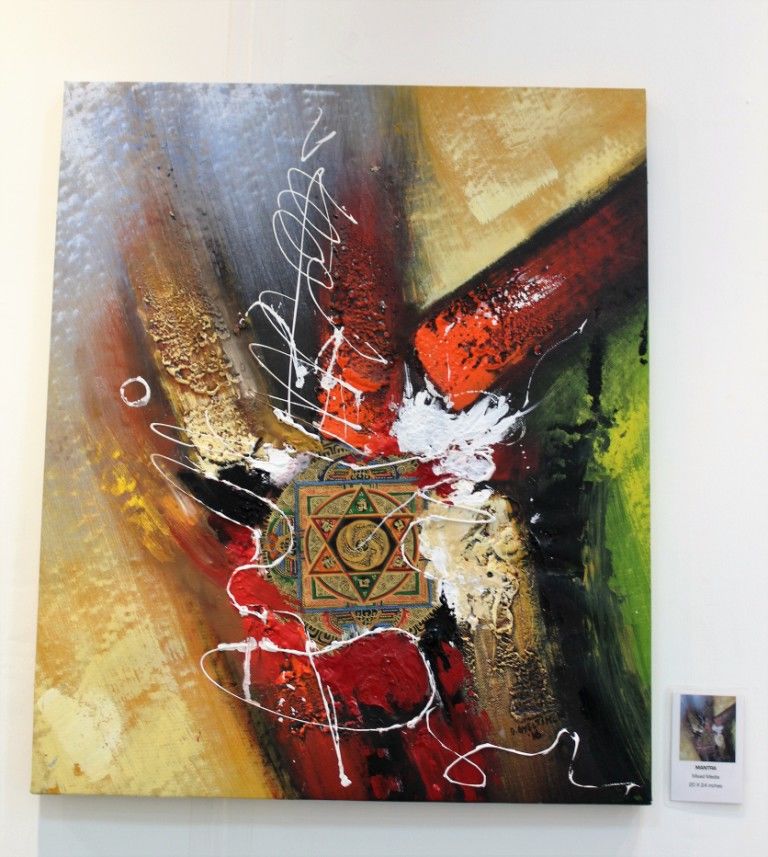 This is another spot about 90 minutes drive from Paro. Marked by Project Dantak as the highest motorable road of Dantak. Very high speed winds blow at the top of the peak and are spectacularly chilly! Don't forget to pack a jacket when you go there. 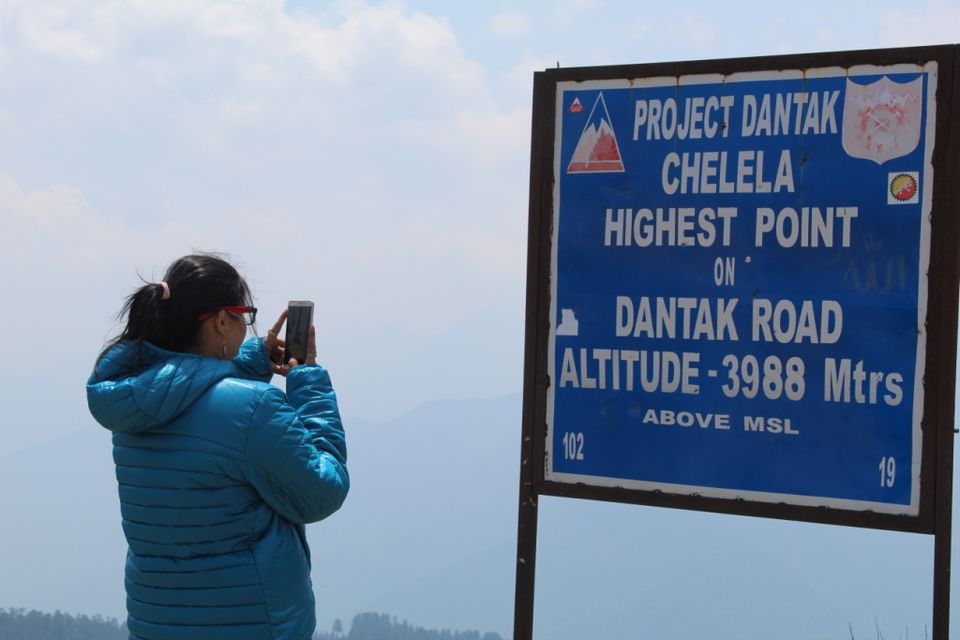 On one side of the Bhutan-India border is the city of Phuntsholing and on the other side is Jaigaon, West Bengal. The border that separates the two is a tall Gate under which traffic moves freely on both sides of the gate. Besides the tall gate for traffic, there is a smaller Entry gate, adjacent to which is another smaller Exit gate. From these gates, people enter and exit Bhutan (and India) at will. Amazing part about the border is, it's a free border with free entry/exit of Indian and Bhutanese people on both sides.When we reached Phuntsholing at around 9pm, we came across a restaurant where Indian families were having food, beer and watching cricket! Ah, a familiar sight I had not seen all this while! It seems people walk across the border, come over to Bhutan side, have good food and booze, enjoy their time and go back to India! I am sure Bhutanese people must be doing the same when they have to shop things at cheaper prices.Yet another striking feature of the India-Bhutan border is the hygiene condition on both sides. While Phuntsholing, although being 'Indianized', is still a Bhutanese city with little population, clean roads and few hotels & eateries. Jaigaon on the other hand is amazingly populated with all the street food vendors, local shops and market, taxi drivers, honking and a lot of people. Welcome to India! 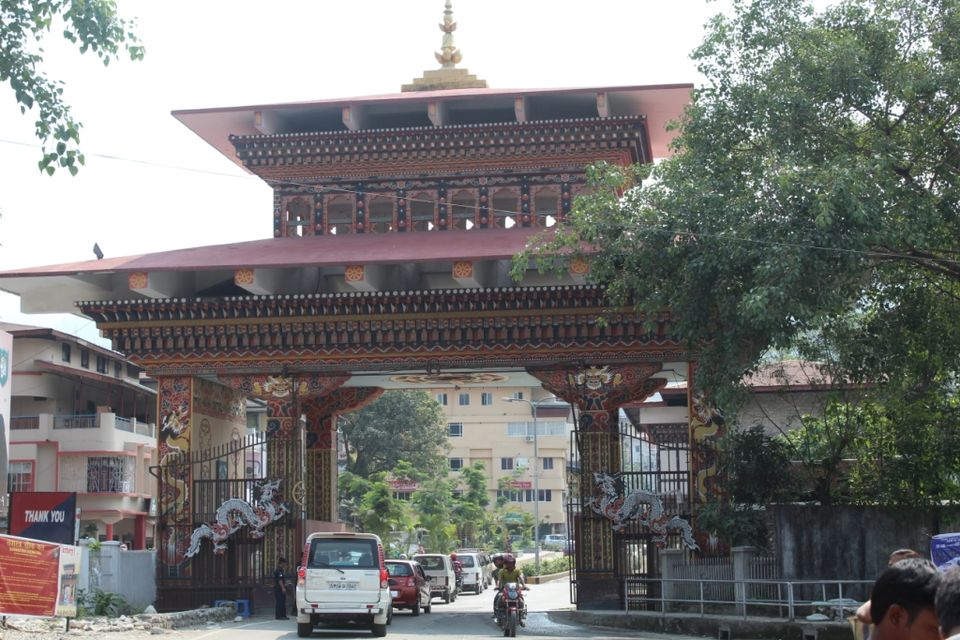 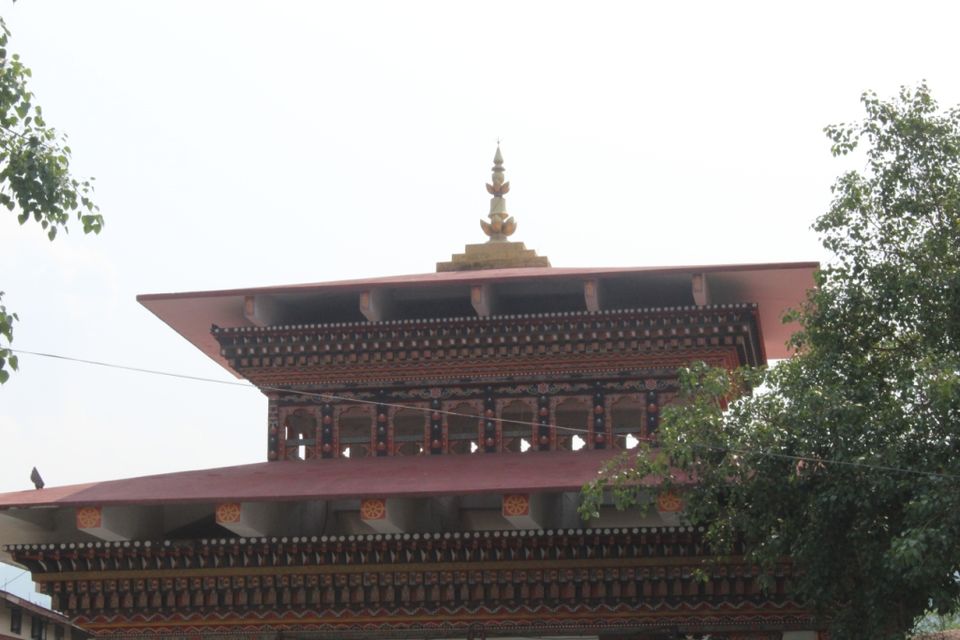