Tale of witnessing the tallest mountains in the world: Sandakphu-Phalut trek

It had been long since my last trek and I was craving to go back to the mountains. It felt like the mountains were calling me and I couldn't ignore the craving I felt. See that's what the mountains do to you- create a constant hunger that needs to be satiated. So I started looking up at the trek blogs and Instagram posts, I found Sandakphu Phalut- a 6 day trek in the eastern Himalayas! The perfect blend of how I wanted to welcome the new year and where I want to be-- standing tall, amongst the tallest mountains of the world!!

As the trek day was coming closer, the excitement levels were shooting off the roof. It was a task to pack for the winter trek- the fear of being underprepared and the weight of being over prepared. After a lot of revisions, letting go of a few things and ranger rolls…I just managed to fit everything needed in that backpack.

25th December 2016, Christmas! The day had come. I had an early morning flight to Bagdogra. I stood in the check in line behind a hundred people, day dreaming about the mountains and was jolted back to reality by the announcement of the final call for the flight. My heart almost skipped a beat as I rushed to the counter and off I ran towards the boarding gate- that was some start!

The weather was surprisingly hot when I landed at Bagdogra. I crossed my fingers wishing for snowfall at Sandakphu. I made my way through the crowds to the luggage belt at the small cramped up Bagdogra airport. After nearly misplacing my backpack for a similar looking Quechua bag.

I then proceeded to the taxi stand where I met others participants of the trek with Indiahikes. Excited, we began our journey to Jaubhari- the base camp. The very pretty blue tea house (the homestay kind of guest houses for trekkers) was going to be our stay at the base camp. We a set of 24 enthusiastic trekkers met each other at the cosy wooden dining room, everyone was beaming and excited for the trek which was going start tomorrow. I knew that even though it will get colder we all will together make it through.

The next day we began the trek, it was a gradual ascend through the pine forest, We made our way to the hill tops where only thorny bushes sprawled. The sparse forest looked burnt yet, weirdly, beautiful. Everything looked as if I was looking through a Sepia filter. And the mist added to the dreamy effect. Throughout our trek we were criss-crossing between India and Nepal border. We never knew which country we were stepping in, but then these mighty mountains know no boundaries!

Through the hills we made our way to the border post. As we took out our ID cards to register at the post, I thought it was raining. But rain drops don't hit so hard.. hell yeah it was hailing! The first hail storm I ever experienced. Hurriedly, we walked to a lovely lunch house near the post. Gradually the mist cleared up and now were soft snow flakes. As we looked through the foggy window, the trail we just walked on was now covered with snow. As if I just changed my vision to a black and white filter!

The trail passes through the Singalila national park, we were hopeful that we would spot a red panda. But the statistics were not encouraging; there are only 25 red pandas in the whole of Singalila.

There is a motorable road up to Sandakphu, which is the highest peak in West Bengal. However to go to Phalut you will have to go by the trekking route,from where you get a better-closer view of the massive mountains.

One of the reasons I was on the trek was that we could see four of the tallest mountains in the world- Mt. Everest, Kangchenjunga, Lhtose and Makalu. And icing on the cake- The Kangchenjunga range along with other surrounding ranges appears like a spectacular silhouette of Buddha sleeping from here.

Looking at these majestic views really does stun you; I could just sit all day gazing at this grandeur. Only if it wasn't that cold!

The nights were the coldest and the hardest; the only saviour was that we stayed in warm wooden tea houses for 3 days. We spent two nights in the tents that we pitched. That was quite a task as the winds were strong and icy. I wore 6 layers of clothes at night, which just about helped me survive the cold. Even washing our lunch boxes after dinner turned out to be a difficult chore, with the ice water. On the freezing nights in tent, I did have a thought on why did I decide to come for a winter trek, but the surreal sunrise view assured me that there was no other place I did rather be.

Sunrise and sunsets were a major highlight of the trek, we got up early every day in the chilling cold to see the sunrise; especially the sight of the first sunrays kissing the Kanchenjunga peak was a sight to behold. Slowly the whole of Sleeping Buddha would be flaming in the golden light.

Though the trek wasn’t technical, there were long treks with many ascends and steep descends, and covering 82 km trek in mountains is definately not easy on your knees. Even though the trail was difficult, but its worth; especially when you have the mighty Kanchedzonga looking over you the entire way.

The descends were steep down for two days, but the Antakshari sessions and chatting on all kinds of random topics with my fellow trekkers made it easier. On the last day of trek as the road was in sight, the talks shifted from nature to the civilian life- about TV series and movies.

One of the best things that travel leaves you with is the people you meet. Saying goodbyes become difficult, especially when you meet like minded set of crazies. I definitely made some lifetime friends!

A set of us headed towards Darjeeling to end the year. I extended my vacation after the trek for two days to relax and explore the hill station and Darjeeling- the queen of hills is indeed a very pretty place. We took the heritage joy ride on a steam engine, like the Parineeta and Tagore stories. The steam ride gives you the colonial kind of feel but the coal blowing off in your face isn't very pleasant. Later we visited Himalayan mountaineering institute. The laurels of great mountaineers did inspire me.

Each trek ends with a bundle of fun moments and friends. And Sandakphu has added to my bag of memories which I will always look back and smile at. 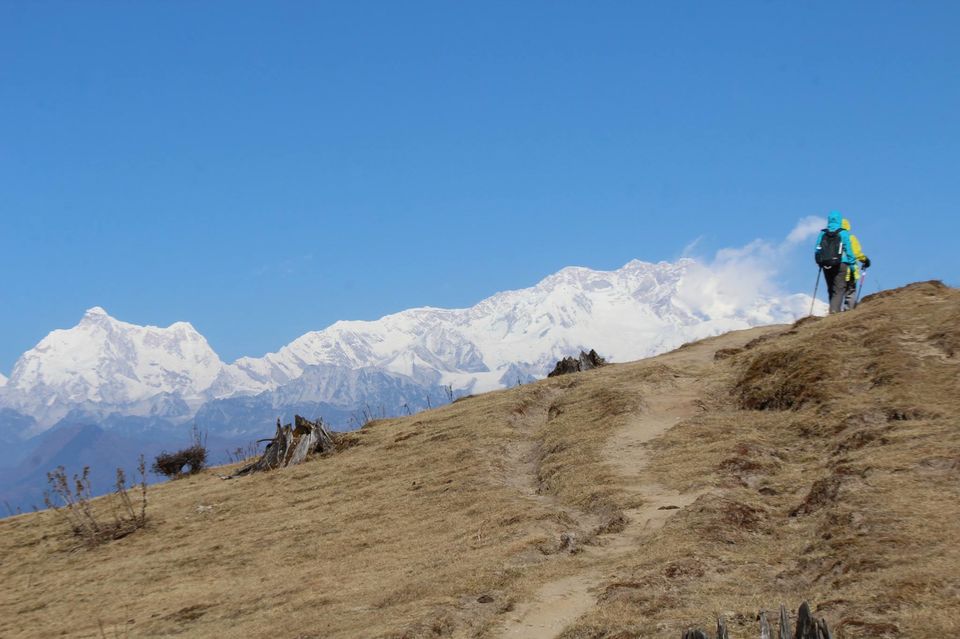