Bangalore Travel GuideBangalore Trips5 Places That Kempe Gowda Built In Bangalore And Why You Must Visit Them!

5 Places That Kempe Gowda Built in Bangalore and Why You Must Visit Them! 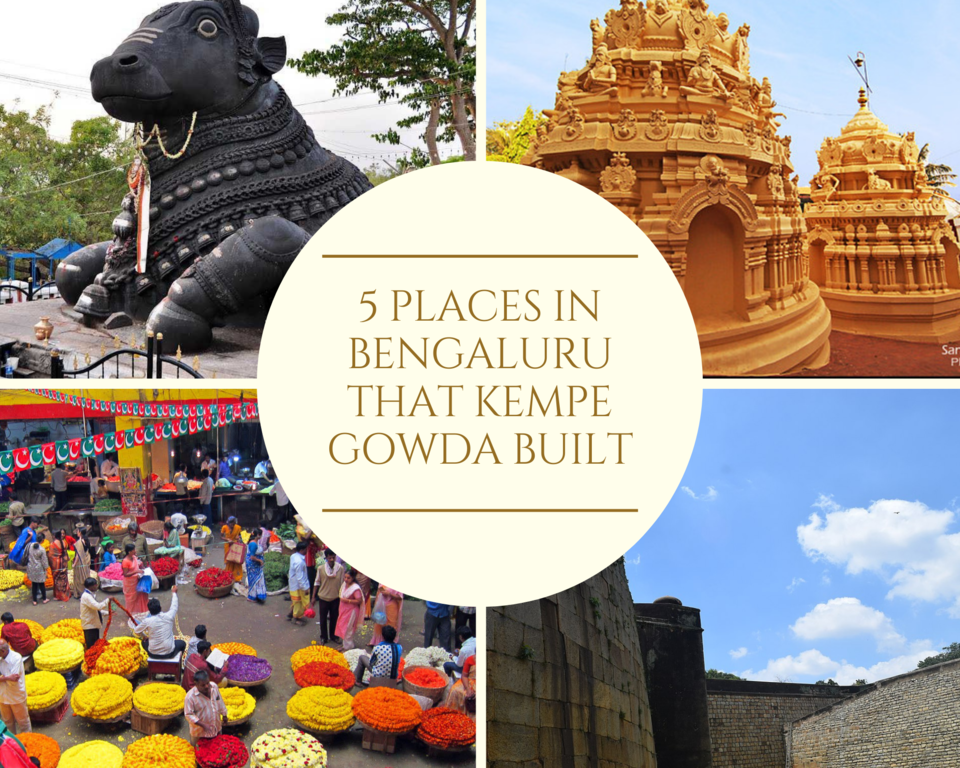 From eclectic pubs and bars to peaceful lakes and parks, Bangalore is a kaleidoscopic blend of all things beautiful. Over the years, it has witnessed many generations and cultures. But the one thing that binds all of it is the city’s art, architecture and planning. And much respect goes to its founder - Kempe Gowda I, who dreamt of a futuristic city and made one.

Today we are taking you on a rendezvous of 5 places that Kempe Gowda built In Bangalore and why you must visit them!

It all began in 1532 when Kempe Gowda, a federal ruler under the Vijayanagara Empire, dreamt of constructing a futuristic city where all kinds of businesses and trades existed. After finalising Bengaluru (then Bangalore) to be that city, four pairs of white bullocks with decorated ploughs assembled in the forest and furrowed the land in four different directions. The routes ploughed by these bullocks were considered the main street of the city.

Chickpet still buzzes with the crowd for clothes, books, antiques, fashion accessories, cutlery, lighting, etc., for budget-friendly shopping. When you get so much at a single place and at affordable rates, neither your mood nor your budget buzzes you from buying.

In 1537, when Bangalore slowly began to take shape, Kempe Gowda got worried about the new city’s safety from invaders. He decided to fortify the entire area. As a result, in 1537, a mud fort was built, later replaced by a stone fort by Hyder Ali and further improved by his son Tipu Sultan.

But soon, an army led by Lord Cornwallis in 1791 successfully breached the fort and captured it. After which, slowly and actively, they destroyed it for other commercial activities. All that remains of the fort are the Delhi Gate and remnants of two bastions. One of the finest examples of Indo-Islamic architecture, visiting this fort is a must to relive the faded memories of the time.

If you are moved by history, myths and stories, Lakshmamma Memorial will surprise you. During the construction of Bangalore Fort, the southern gate had collapsed no sooner than it was built. Later, human sacrifice was indicated to ward off the evil spirits. When Kempe Gowda resisted the human sacrifice, his daughter-in-law, Lakshamma, beheaded herself with a sword at the southern gate in the darkness of night. After that, miraculously, the fort was completed.

To commemorate her sacrifice, Kempe Gowda established a temple in her name. This poignant story of sacrifice is almost certainly fictitious, but if this indeed happened and you think about it, it will undoubtedly send chills down your spine.

Next up on the list is the Bull Temple. Also known as Nandi Temple, it is famous for its giant statue of the sacred bull, Nandi. With its enormous height (4.6 m) and length (6.1 m), the idol of Nandi is said to be one of the biggest in the world. A relevant aspect to note is that the idol is carved from a single stone of granite. This uniqueness attracts thousands of devotees and tourists to the temple.

A festival, ‘Kadalkai Parase’, is celebrated in the temple, and the first harvest is offered to Nandi. An interesting fable about the construction of this temple goes on. According to the myth, the area was well-cultivated with groundnuts and peanuts, but just before the yield, a bull in the region used to damage the crops. As the damages amplified, the farmers decided to build a temple to please the bulls. As the legend goes, the bull stopped rampaging the crops almost miraculously after the construction of this temple.

Dedicated to Lord Shiva, the temple is notable for its astronomical wonders. The entire temple is carved out from a monolithic rock. A unique aspect of the temple is that its stone discs are placed to illuminate the Shivalinga inside the temple for about an hour once a year. Scientists have recently discovered the significance of pillars and monolithic discs of the temple, perfectly aligned with the sun & moon.

Bengaluru’s face has evolved, and while the city will glorify other places in the future, we wish these antecedents to remain the souvenirs of time. A lot of important locations have been named after him to commemorate his works like Kempe Gowda Majestic bus stand, Kempe Gowda airport, etc.

And for you, does all this sound familiar or is completely new? What are all the places that you can recollect that Kempe Gowda contributed?

Connect with me on my blog and Instagram. I would be the happiest to see you on the other side.