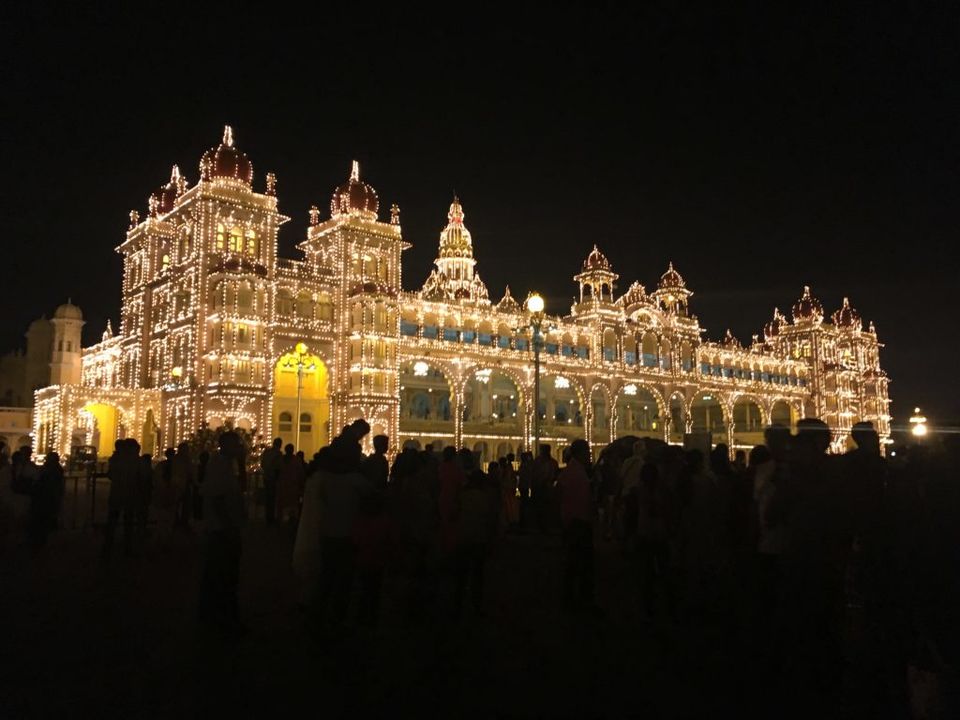 I visited this place when i was on my trip to coorg.

An incredibly breathtaking example of Indo - Saracenic style of architecture, the Mysore Palace is a magnificent edifice located in Mysore, Karnataka. Henry Irwin, the British architect of Madras state who designed this gem. The palace was built by the twenty-fourth Wodeyar Raja in 1912 on the site of the old wooden palace that was gutted in the year 1897Maysore palace of the royal family of Mysore and is still their official residence. This place is also referred to as the 'City of Palaces'.

Mysore Palace also known as Amba Vilas Palace located at the core of Mysore city is the most prominent tourist destination of Mysore that draws in a huge number of a visitors round the year.

The palace has now converted into a museum, which treasures the souvenirs, paintings, jewellery, royal costumes and other items, which were once possessed by the Wodeyars.

Another most attractive feature of Mysore palace is the temple. Its complex houses many Hindu temples, which are currently secured under the Karnataka state division of the Archaeological Survey of India.

It is worth seeing the lighting-up of the outside of the beautiful palace with 96,000 (approx) lights that happen every Sunday and public holidays from 7 to 7:30 pm. This is a large, beautiful palace that has been rebuilt a couple of times after fires. If you only have time to see one thing in Mysore, see this! and tickets are not required.

Coorg is a year-round destination. But October to March is the best time for adventure activities especially trekking. March and April are the favored months to experience the valley shrouded in white flowers.

By Air -  Mysore Airport also known as Mandakalli airport is a domestic airport that is situated at a distance of 14 km from Srirangapatnam. Nearest International airport is the Bangalore International Airport that serves the city providing flight services for almost every major cities. Taxis and cab facilities are available from the airport to various places.

You can also take the bus from Kempegowda Bus Station in Majestic to Mysore. There are several options of state transport buses as well as private tour operators. Tickets are easily available at the bus station ticket counters.

If you want to drive to Mysore from Bangalore, take the Mysore Road (SH 17) all the way till Mysore via Kengeri, Ramnagaram and Mandya. Alternatively, you can go from Jayanagar, Bangalore on the Kanakpura Road (NH 209) via Kanakpura, Malavalli and Bannur.