From A Little Shack In Haa Valley, Bhutan

The little shack at Haa Valley 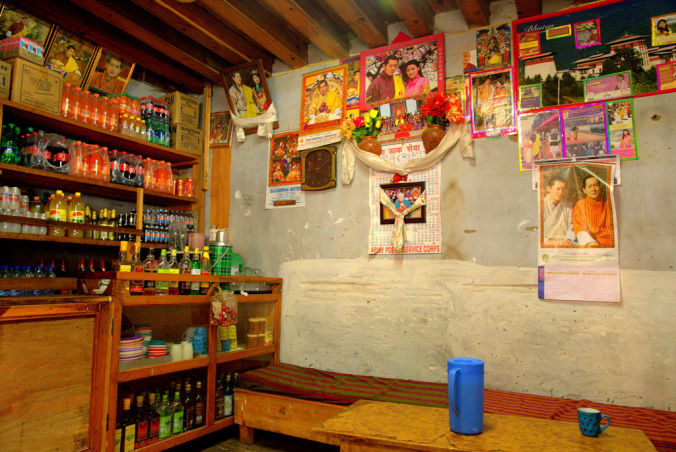 In this larger world where we live, there are numerous smaller worlds, each nurturing itself in a different way, completely hidden from the rest. Backpacking across Bhutan will not only give you a chance to explore the country like a local, but it will also show you the raw and untouched sides of the country that you would otherwise miss out!

Such was Haa Valley (‘Haa’ in Dzongkha literally translates to ‘rice’), situated in the Western part of Bhutan, bordered by Tibet. Scarcely populated, Haa Valley appeared like a dreamland to me. Being an atheist, I don’t really believe in God, but I would love to thank the Creator, for creating such an alluring place.

In the small world of Haa, where people are completely reluctant about what is happening in the rest of the world, I found an even smaller world – a little shack next to the Karpo Lhakhang (‘Lhakhang’ in Dzongkha literally translates to ‘temple’).

My morning started quite early that day, and I was excited to attend the Tsechu Festival in Karpo Lhakhang. The music of the drums, lingm (six-holed flute), and the chiwang (Tibetan two-stringed fiddle) could be heard from a distance, and everyone around me wore brightly colored clothes. I could feel the essence of celebrations in the air.

This little shack was right next to the Lhakhang, inside a shady lane. Probably the magnificently decorated Lhakhang made the shack look more dull than it usually is. I was with a friend, who thought it’s a bad idea to have breakfast from there – he said the place was stinking and I wouldn’t be able to eat there. But we didn’t have many options, and there was something about that place that dragged me in. Located at the edge of the cliff, surrounded by the Himalayas on all sides, the Haa Chu (‘Chu’ in Dzongkha literally translates to ‘river’) flowing behind it, and the entire jolly ambience somehow supressed that pungent smell that lingered around the shack. In a 10x10ft room, it had two benches with two tables, and a rack full of Bhutan-made chips, local liquor bottles, Coke, Fanta and large cans full of tea made with yak milk, and big vessels full of beef and cheese momos.

We instantly grabbed some steaming hot momos, served with an even hotter chili sauce!

In a world where the people are waging wars over religion, this shopkeeper worships the King and Queen, and has cut out their photos and pasted all over the walls of his little shack. Mr. Wangchuck, living in his Royal Palace in Thimpu, would never come to know about this guy, who considers him to be equivalent to the Almighty.

Soon, three men stepped into the shack, wearing bright yellow and orange ‘gho’ (the traditional dress, worn by Bhutanese men). They spoke to the shopkeeper in their local language, after which he poured three cups of tea, and they walked away. Later, we realized that those three men, wearing identical clothes, were to perform at Tsechu. 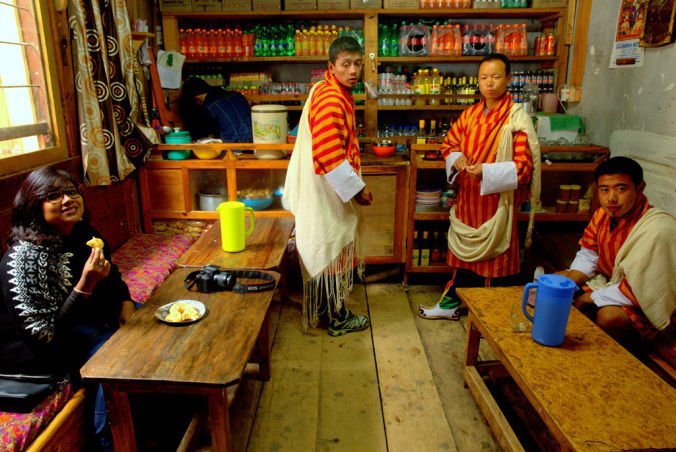 After an interval of few seconds, a lady came in, with her daughter and her dog, which occupied half the floor space, while trying to relax. The lady also asked for a cup of tea, and the girl had a plateful of momos.

The lady and her dog. 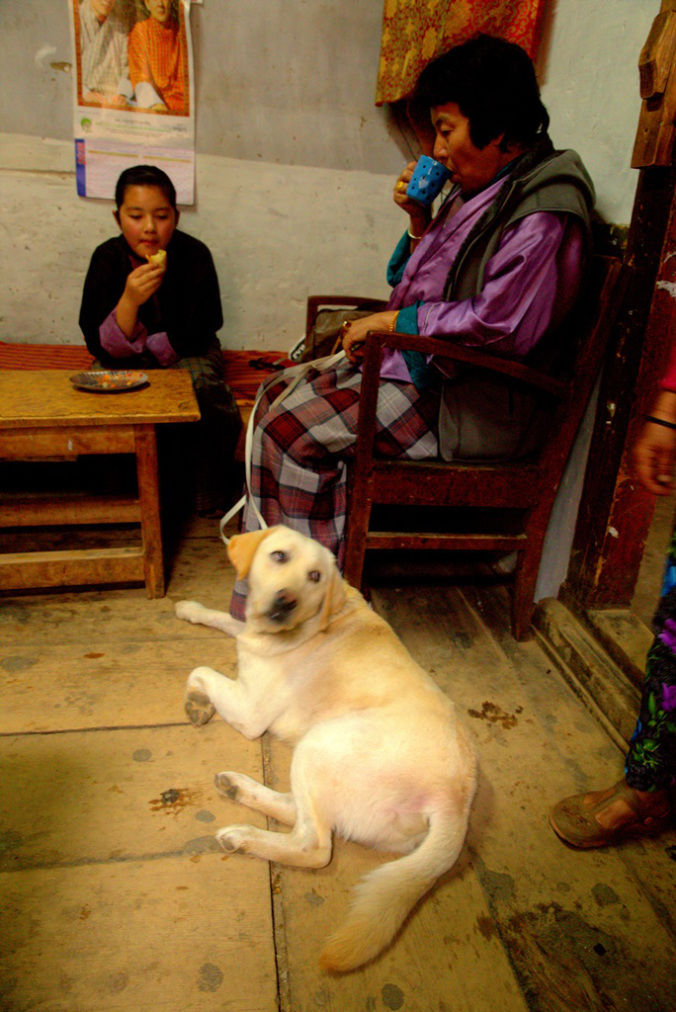 While I sat on the other side, observing all these people, my friend was busy clicking their photos. He was more keen on capturing all the emotions that flowed in and out with those people, and I tried to interpret what they were saying to each other. This, I feel, is the most interesting part of not understanding a language – you never know what people are saying, and thus, you have full freedom to make your own interpretation, based on their body language.

The momos acted as appetizers, and I felt like hogging on some more food.

“Maggi?” – I told the guy, who made some gestures and called in another person. This new guy said, “Koka, Koka”. Me and my friend took a few seconds to understand that ‘Koka’ is the local product, more like Wai-Wai, when the first guy passed a packet to the second one, who showed his fingers to assure us that ‘Koka’ will be ready in 5 minutes.

As this entire thing was happening, the music in the background became more intense, only to make everyone understand that the program was about to begin.

Wearing colorful kiras (the traditional dress worn by Bhutanese women), four beautiful ladies stepped in, one with her child, who wore a tiger’s mask. As my friend tried to shoot him, he stood still for a moment and then jumped to hug his mother. (Well, wearing a tiger’s mask clearly didn’t make him brave enough, it seemed!) Those ladies giggled amongst themselves, and probably they were saying something about us, who were the only differently dressed people there. 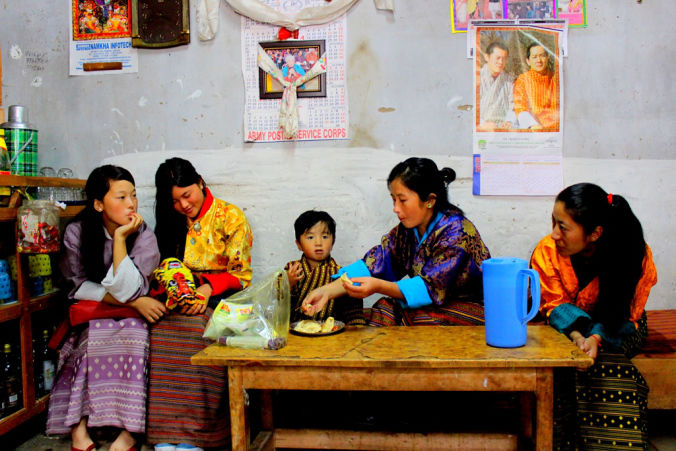 In less than 5 minutes, our bowl of ‘Koka’ arrived – noodles dipped in soup, a little blunt in taste, with a tinge of cheesy flavor, and chunks of chili. The wide smile with which he served us the food actually killed the bluntness, and it seemed to be the most delicious noodles that I’ve ever tasted.

Two monks also came in and asked for beef momos. They assured us that there was still some time for the program to start. 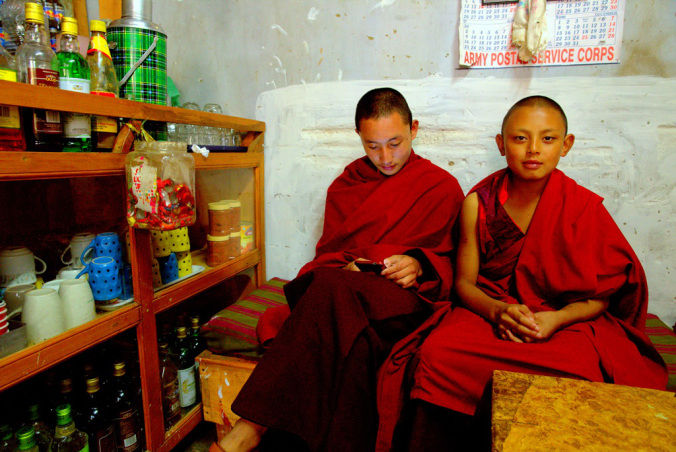 I asked the shopkeeper guy if he was also going to the Lhakhang or not. He nodded his head and in broken English, he said that there are more customers during the festival, so he plans to be at his shack.

While most of the people in Haa Valley waited for Tsechu to celebrate, this guy looked forward to the festival, hoping to make a little more money than he does in the rest of the year.

I’ve hardly spend 15 minutes in that shack, and in those 15 minutes I came across a different world, that was complete in itself. A world that comprised of few, a world away from cacophony and corruption, a world unaware of mistrust and hatred, a world that’s immensely colorful and happy, a world where people know themselves and others, a world where people don’t care much about what’s happening elsewhere – the little shack, a world in itself, has so much stories to tell, that the larger world would never get to know! 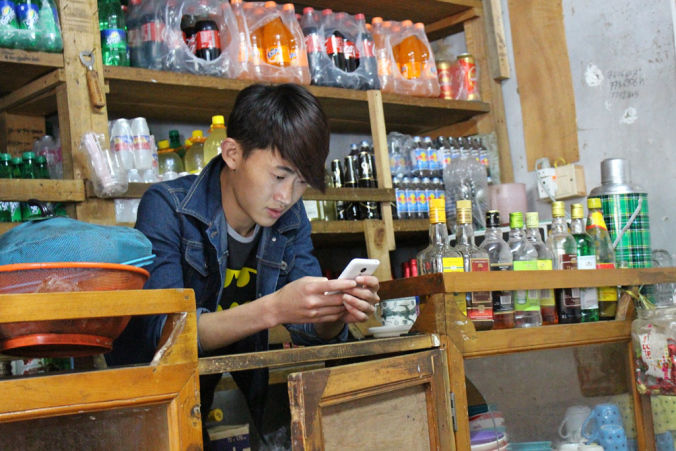 This story was originally published in WordsWeaveStories.