Dwarka – The city of Lord Krishna

My journey started to my sister's place in Jamnagar. Arrived by train on Sunday the 22nd from Bandra terminus. The moment we alighted the heat and dryness.

I was really excited to visit Dwarka, had seen  some documentaries on the lost city under the sea.Took a local cab from Jamnagar to Dwarka, choose a A/C cab cos the heat becomes unbearable. Try and leave early say 6 am. Takes about 1.5 hrs to reach Dwarka. The entrance is huge and then make way to the temple. A short walk to the temple with shops around. You will be welcomed by the so called temple guides who will try and help you with the temple details. We did not get a pleasant one so we chose to check the temples on our own. The guides seemed good at the end hopefully their charges are justified. No mobiles and cameras allowed. The inner sanctum in under the huge multi-storied structure with the huge flag on it. Lord krishna looks absolutely amazing with all the decorations. The decorations keep happening every hour and flag change is done 5 times in a day. There are smaller temples dedicated to the wives of the Lord and also to his avatars. Some of the temples had themes and one had classical hindustani songs being played. There is a large hall which had some good architecture. At the back of the temple you can visit the "Gomthi Ghat". Shop for some Bal-Krishna, found it less costly.
We took our route to Nageshwar temple which is easily identifiable with the huge statue of Lord Shiva in sitting position. T-series owner Late. Gulshan Kumar is claimed to have funded the building and the temple has a Jyotirlinga. Possibly pose for some pictures with the Lord. On the way to Beyt Dwarka passed through "Gopi Kund" famed for the story of the Lord Krishna stealing clothes of his gopi's. Nothing much to see except a small pond , small temples, and lot of people selling "Gopi-Chandan"- nothing but Multani miti  from the pond. Beyt Dwarka was a disaster cos we started late and by the time we reached the temple it was closed. Avoid reaching Beyt after 1pm and before 4:30 pm. We took the local ferry which costs Re.10 per head from Ojha to Beyt dwarka. Locals will offer to take you alone for Re.500-suggestion, skip it cos you can spend that on purchasing some items on the island.(Probably next time I will be able to complete this-heard it is great to see the architecture).
Left Ojha in a hurry to reach  Jamnagar but stopped on the way at beach of Bektal which is a sanctuary for turtles. Beach is clean and with almost no crowd. You can see small turtles in the small igloo kind buildings. Let's leave this place for the turtles. Have a walk on the shore and enjoy the sunset.
Left the beach and headed for Jamnagar where a city welcomes you to its lights and big industries.
Things to remember: 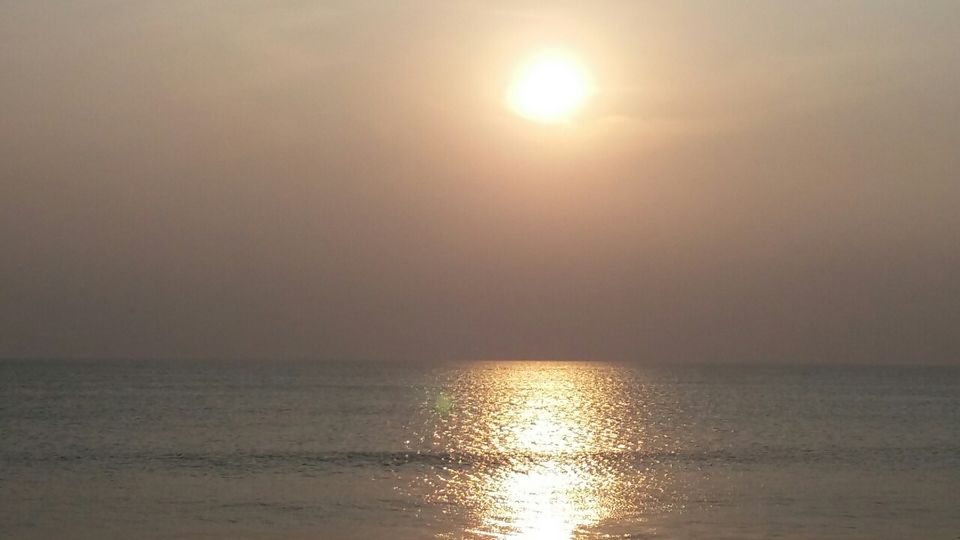