The mighty fort of Gwalior 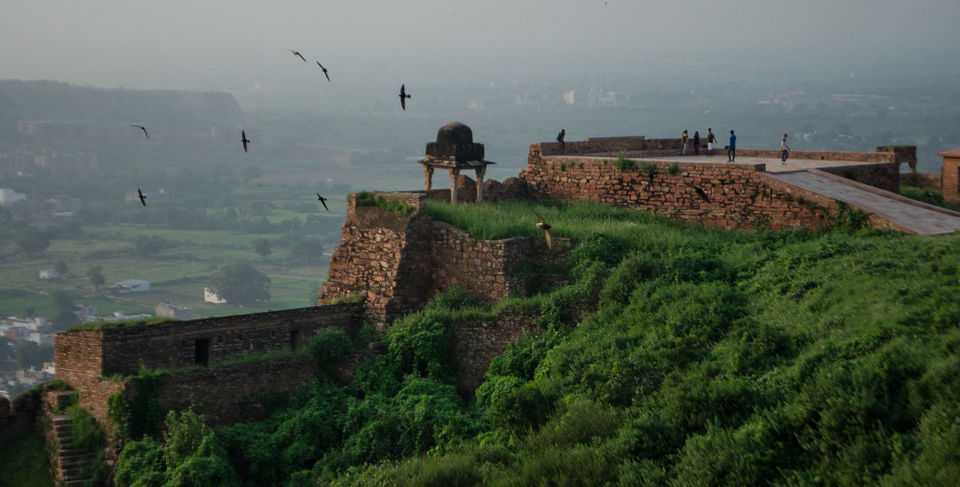 History of the majestic Gwalior fort

The fort and the city of Gwalior 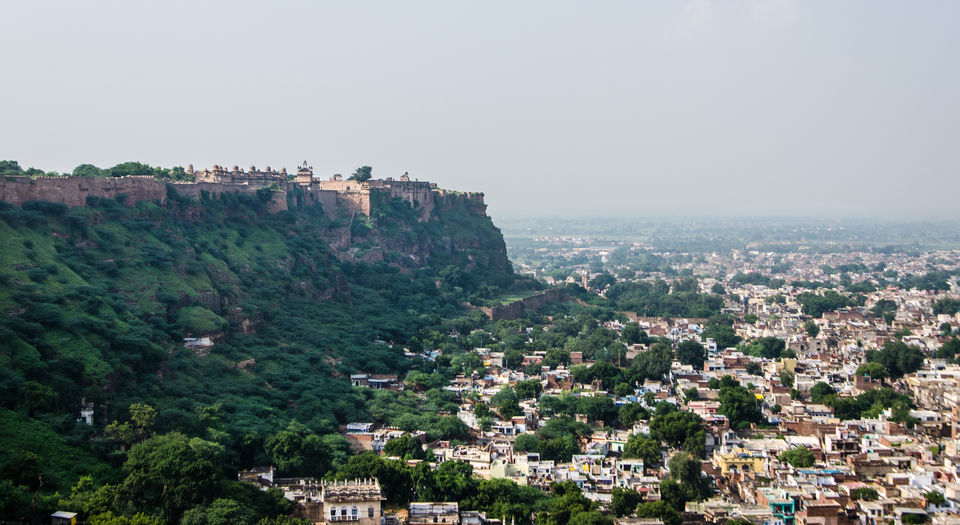 The history of this beautiful fort in Madhya Pradesh goes well back, past the 5th c. CE. when the Guptas were ruling. The hill on which the fort stands was variously known as Gopachala/Gopagiri/Gopadri, meaning the shepherd's hill, and is a 300 feet high rocky outcrop that is long and narrow, and gives a bird's eye view of the surroundings.

In the 6th c. CE two Huns named Toramana and Mihirakula ruled the area after defeating the imperial Guptas. Few years later however, Yasodharman defeated Mihirakula, and established his rule. Later the fort area went under the control of Emperor Harsha of Kanuaj. The next ruler of importance, was Raja Mihira Bhoja Deva, and his dynasty held power until the Kachhwahas came took over the fort and adjoining areas around it. It is locally believed that the fort's foundations were laid at this time under the Kachhwaha king Suraj Sen, who was cured of leprosy after drinking water from a spring near the Suraj Kund under ministrations of a sage named Gwalipa. In 1129 CE the Pratiharas (another Rajput dynasty) usurped the throne, only to lose it to Qutbddin Aibak in 1196 CE. The Pratiharas won back the fort and it remained under their rule until 1232 CE when Iltutmish captured it, after eleven months long siege, killing 700 prisoners right before his tent and destroying many of the temple structures inside the fort. This was also the first time when Jauhar occurred inside the Gwalior fort premises. The fort remained with the Delhi sultanate until 1398 CE, when the Tomars took control over it. The Tomars ushered in the golden era of the Gwalior fort and gave the region a certain degree of economic prosperity and stability. It was during the Tomars' rule that many of the beautiful Jain sculptures were carved inside the fort premises, likely at the behest of some Jain merchant prince.

The most famous ruler of the Tomar dynasty was Raja Man Singh who built the beautiful Man Singh palace also known as Man mandir, and the Gujari mahal for his queen Mrigyanayani, the later being famous for starting the Gwalior School of Music that produced some of the best musicians of the era, including Tansen. After the death of Raja Man Singh in 1517 CE, the fort was taken over by Ibrahim Lodi, and from him it went to Babar, who left behind his mark by ordering the destruction of the Jain murtis; however his orders were only partly carried out owing to the massive size of the murtis. Thereafter, the fort remained with the Mughals, with a short break of 15 years when Sher Shah Suri overthrew Humayun. Akbar turned this fort into a political prison and for the next two centuries the fort walls witnessed many terrible deaths of Mughal princes and other state prisoners. 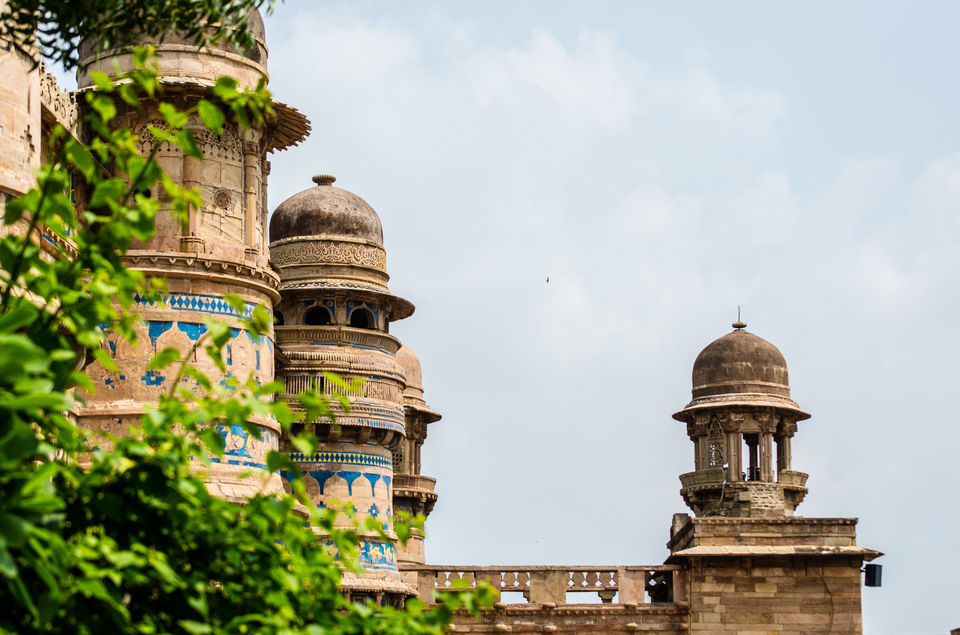 After Aurangzeb's death, the fort went under the control of the Gohad chiefs, and later to the Marathas under Mahadaji Scindia. In 1780, the East India Company captured the fort after a brave nighttime attack under Captains Popham and Bruce, but the then governor Warren Hastings placed the fort under the Gohads again. Within four years the Marathas recaptured the fort, finally losing it to the Company during the Second Anglo-Maratha War. Between 1808 and 1844 the fort control oscillated between the Scindias and the Company, when finally in 1844, the fort was finally given to the Maratha Scindias, albeit under Company authoritarianism. During the 1857 mutiny while some of the soldiers stationed in the fort rebelled against the Company, the ruler Jayaji Scindia remained faithful to the British government. In 1886 complete ruling rights to the fort was transferred to the Scindia family by the British Crown in exchange for Jhansi. The Scindias kept their control over Gwalior until 1947. 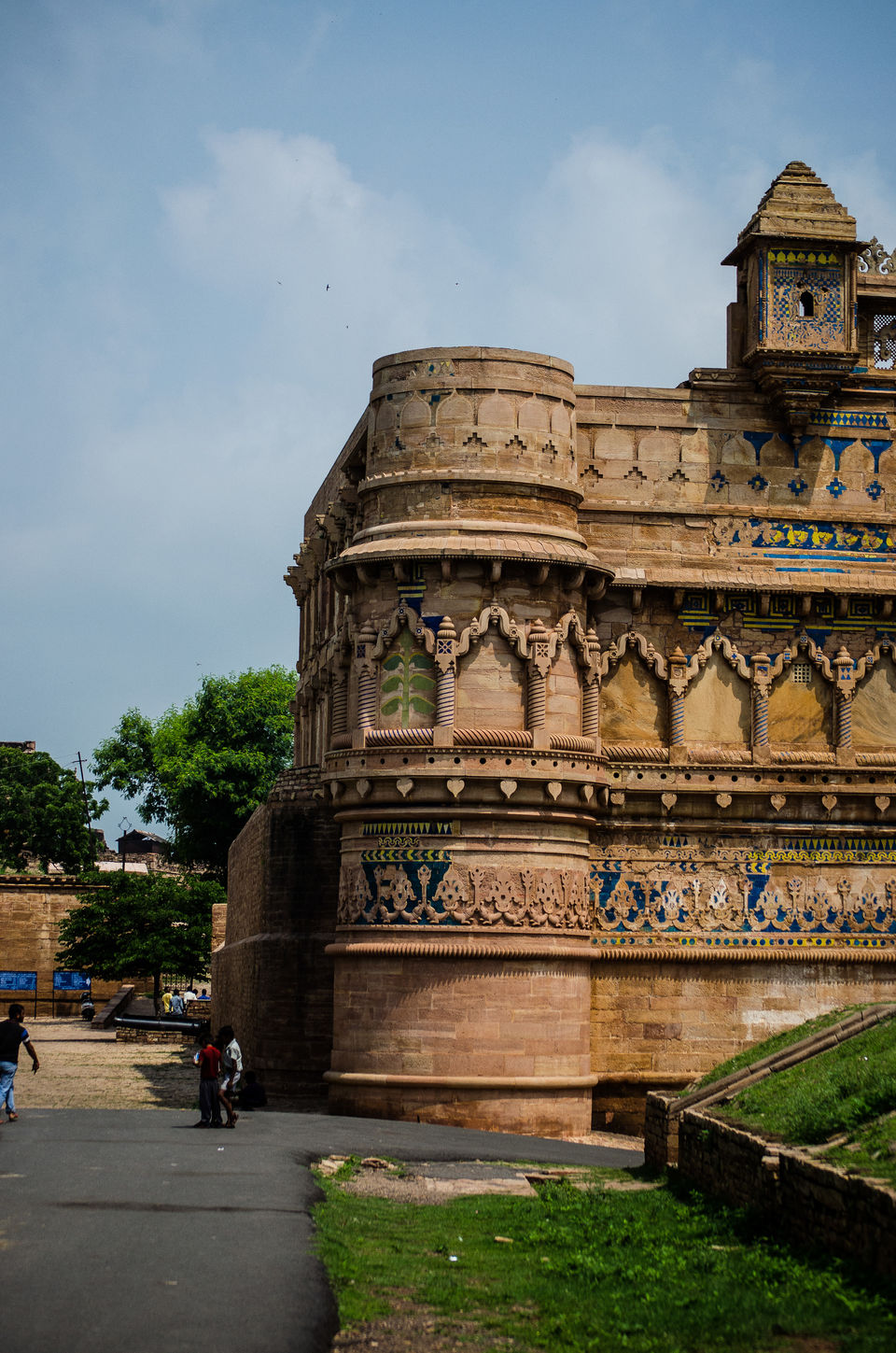 Monuments inside the Gwalior fort

The main monuments inside the fort premises are Teli Ka- Mandir, Sas Bahu temple, Man Mandir, Badal Mahal, Chaturbhuj temple, Rock-cut Jain tirthankaras, Ganesha gate, Urwai gate, alamgiri gate, the kunds including the jauhar kund, etc. The Manmandir palace built by Raja Mansingh (1486-1516 CE), a well known patron of music and architecture, is considered as the most remarkable example of an early Hindu palace architecture. The extensive eastern facade of the palace which is 300 feet long has six beautiful circular towers with domed cupolas. The palace wall is famous for its inlaid tiles in enamelled yellow, green. and blue colours, that show figures of various animals like ducks, tigers, crocodiles, and elephants, along with different other motifs. The palace interior has two open courtyards that have rooms all around with beautiful ceilings and balustrades in different designs. There are also rooms in the palace basement that were initially used as pleasure chambers, which were converted into prison cells later in the Mughal period 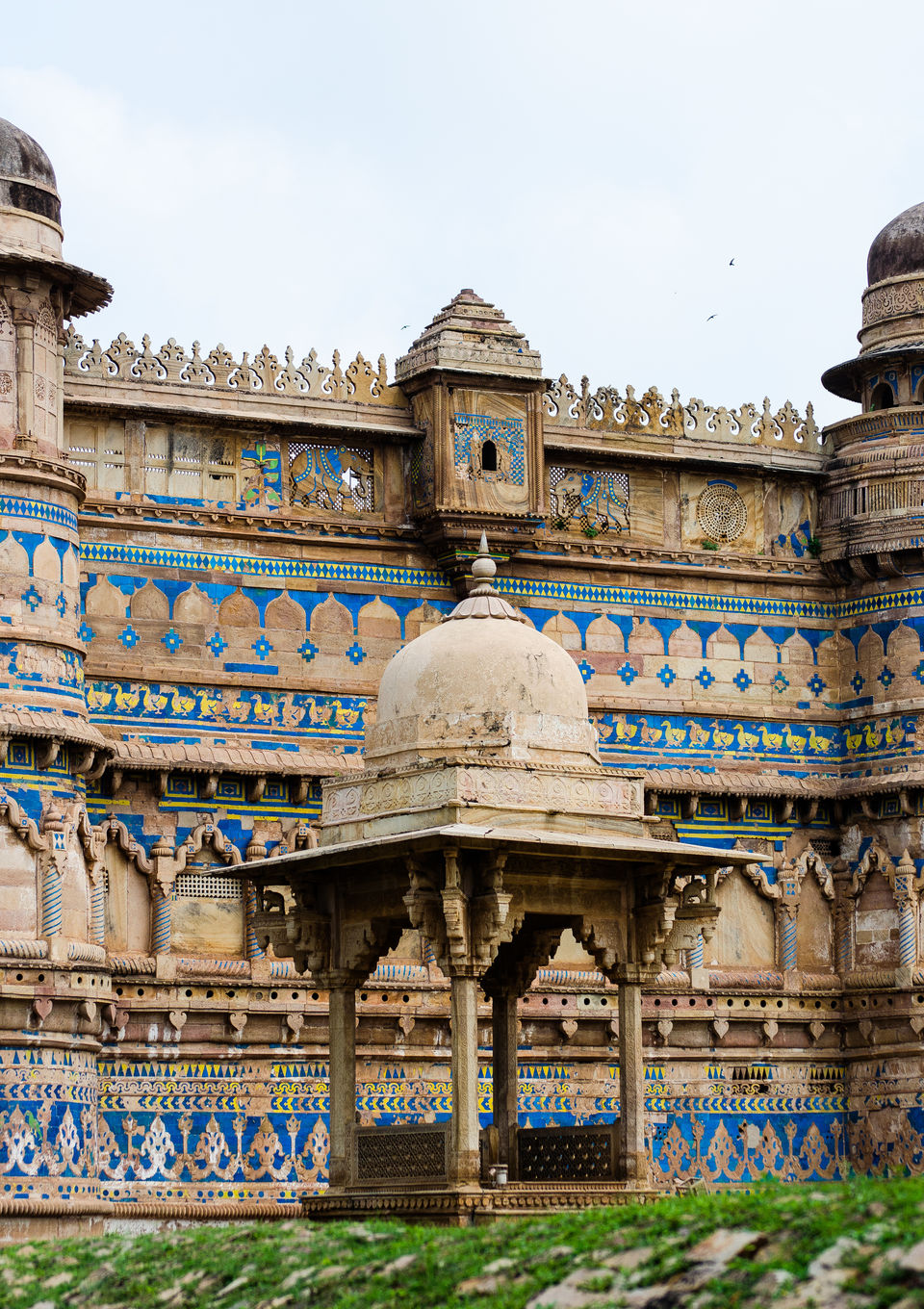 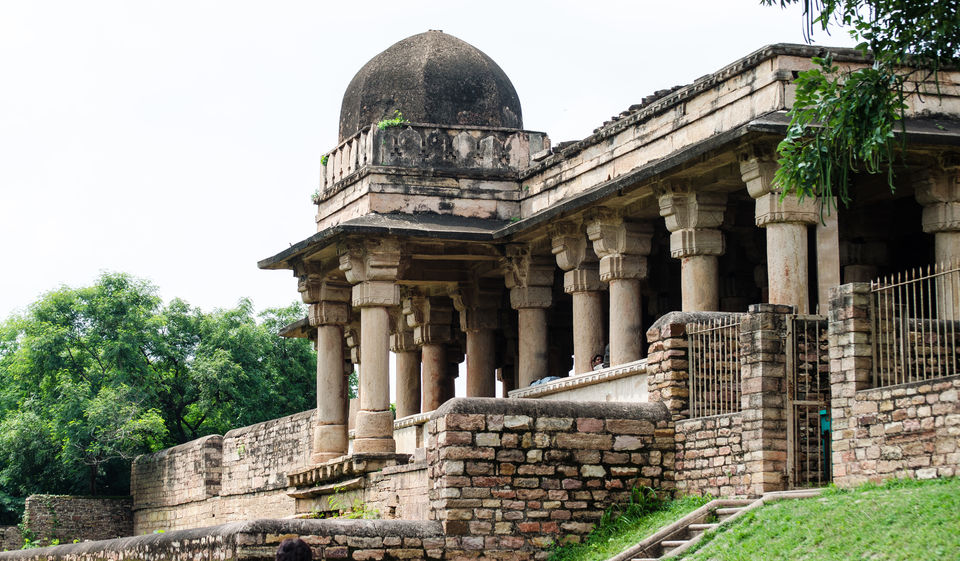 The entrance to a beautiful circular baoli is through this pillared hall. Locals say this was earlier a Shiva temple, and Jahangir had taken the lingam and thrown it down over the fort wall. Later it was discovered by a farmer tilling his land, and now there is a temple where the lingam was unearthed.

The enclosure known as Jauhar talao, where jauhar had taken place 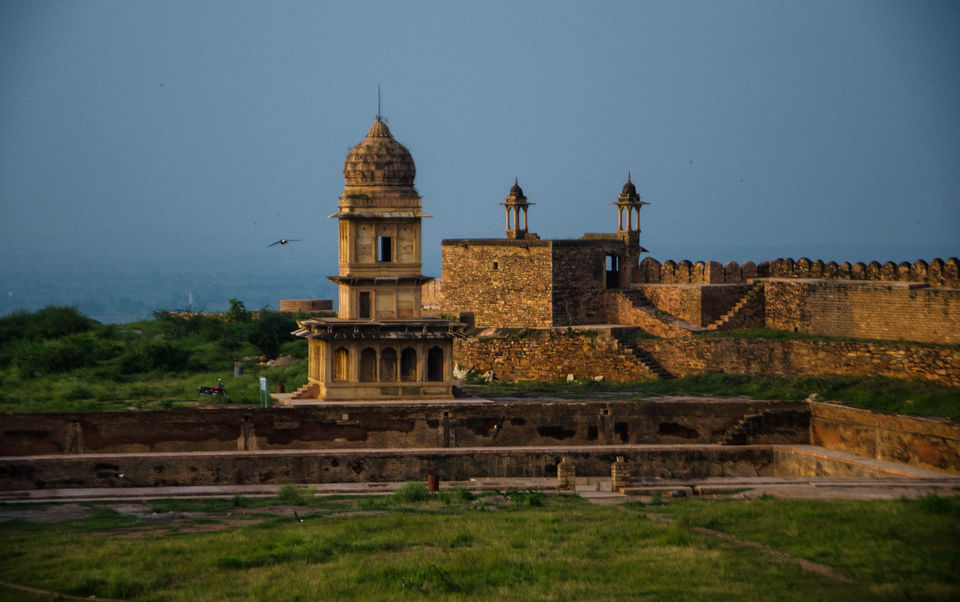 Inside the courtyard of Man Mandir Palace 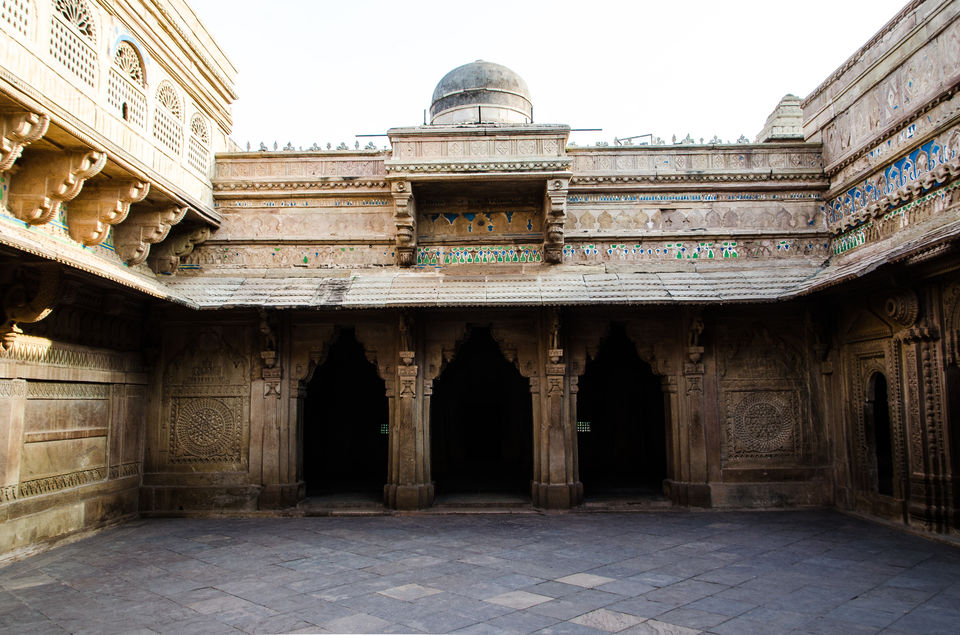 The 'oilman's temple' as it is often referred to in the colonial era books and records, is the most imposing structure within the fort premises, standing tall at more than 100 feet height. The temple was extensively damaged during Iltutmish's attack, but later attempts were made to restore the temple when the fort was won back by the Tomars, which accounted for some features that were of a later period (Cunningham). It was found by the British archaeological team in a ruined condition in the 19th century, and renovated. It is believed that the temple was built in the mid 8th c. CE, and is now dedicated to Shiva. 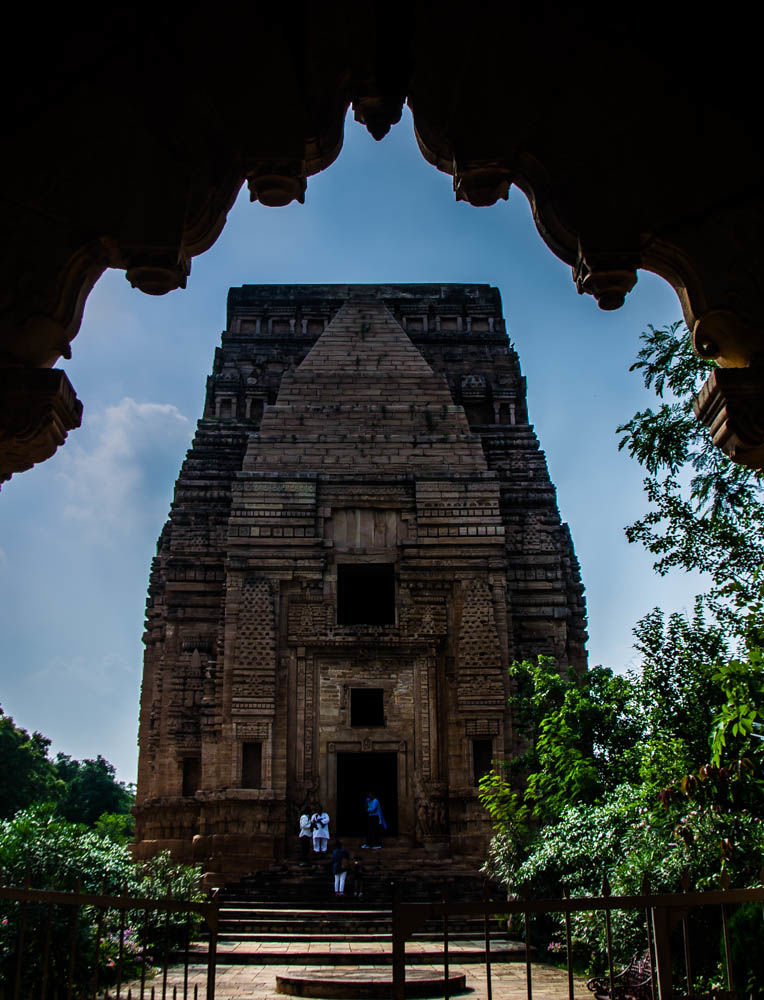 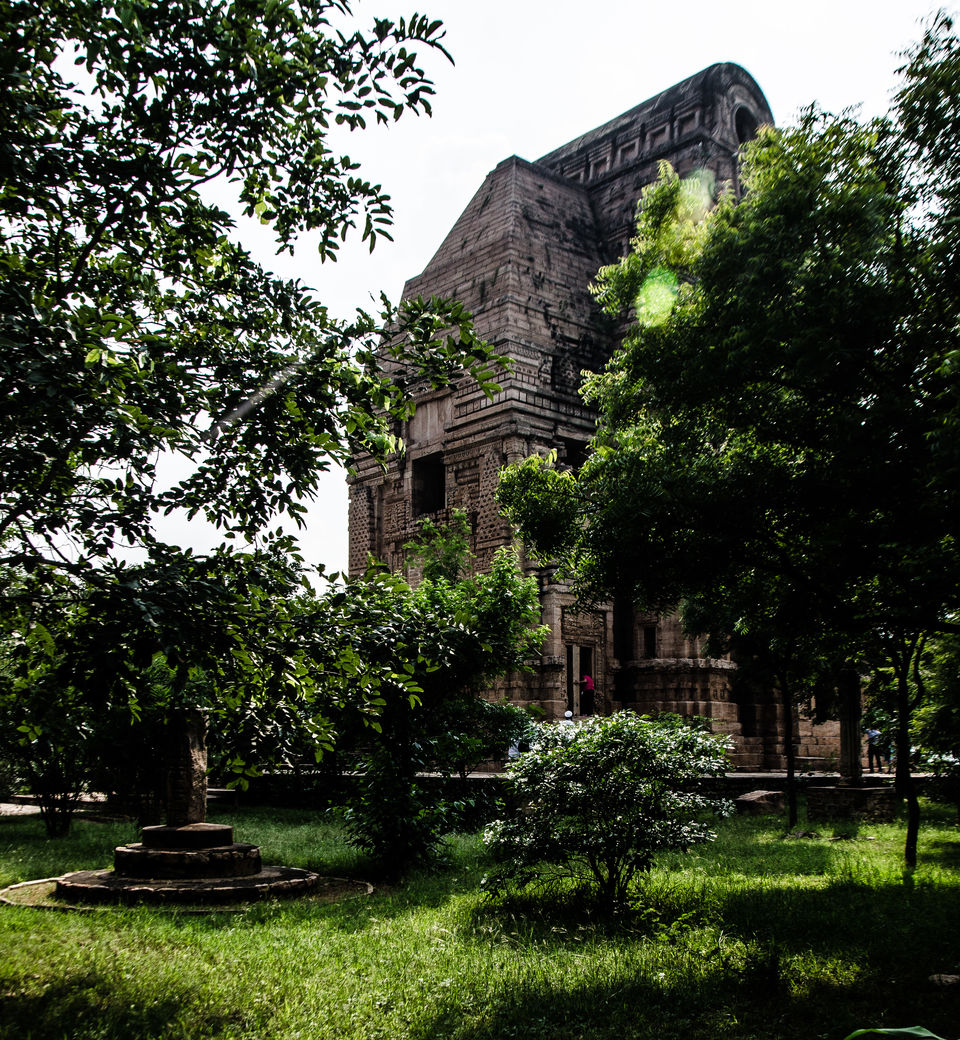 The two river goddesses Ganga and Yamuna flank the door jamb of the lofty entrance door to the temple. 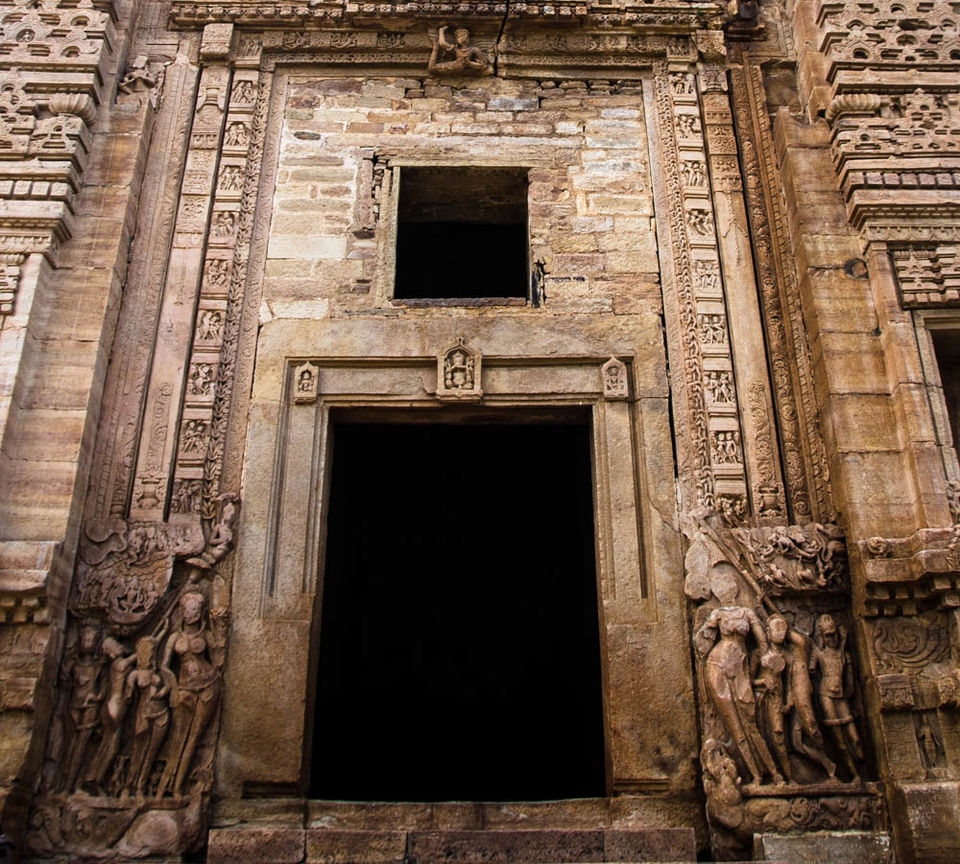 The saas bahu temple are a pair of temples, one large and one small, situated on the eastern end of the fort rock, near Suraj kund . The temple pair is also known as Sahastrabahu, or the thousand armed (infinite), referring to Vishnu. It was built by Padmapala, a Rajput prince, during the reign of Mahipala in 1093 CE. The doorways, ceilings, and the massive pillars in the larger temple (saas) are exquisitely carved. Almost all figures carved on pillars and temple walls have been vandalised during the Delhi sultanate rule, and some are now beyond recognition. The saas temple has been reconstructed and repaired to some extent. The smaller temple (bahu) remains just as a shell of the mandapa in its former glory, and the sanctum is non-existent. 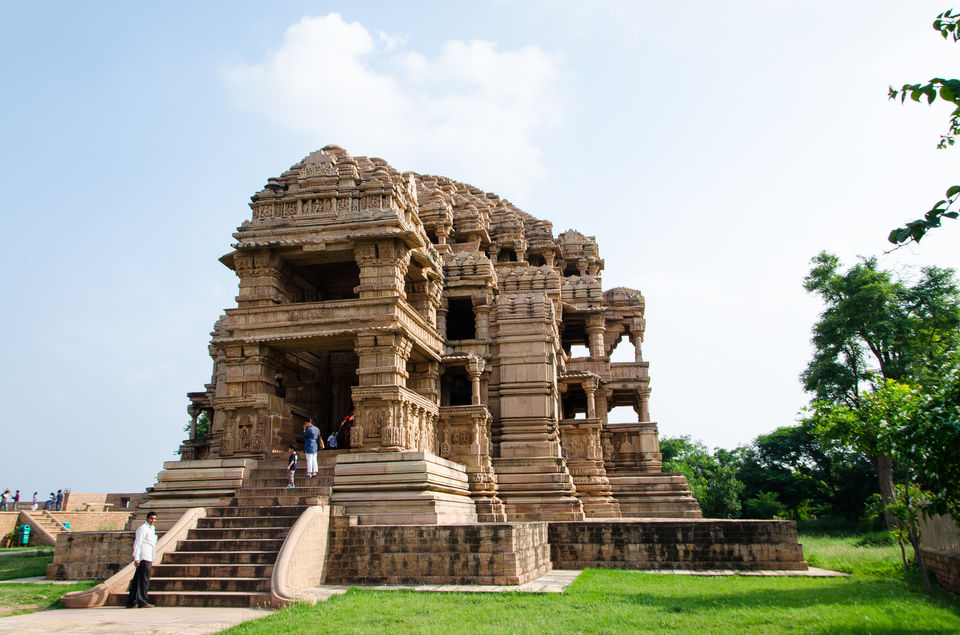 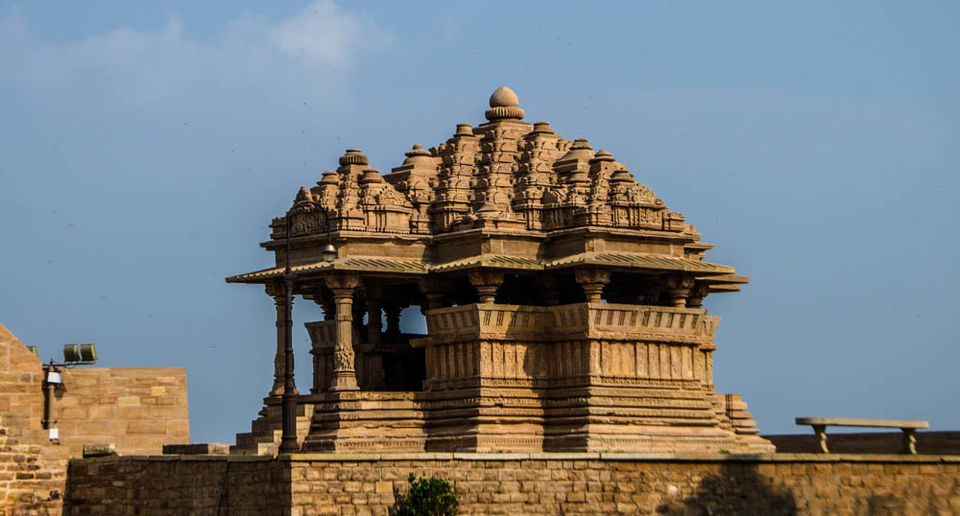 The Saas-bahu pair, as they stand now. According to Cunningham, the temple in its full glory would have stood more than 100 feet tall. 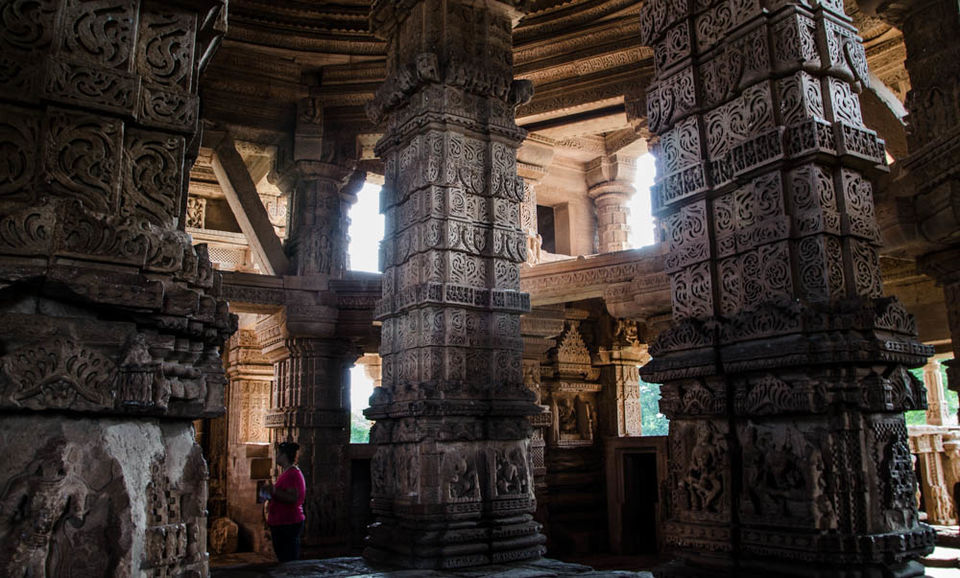 Sculptures on the outside wall of the saas temple 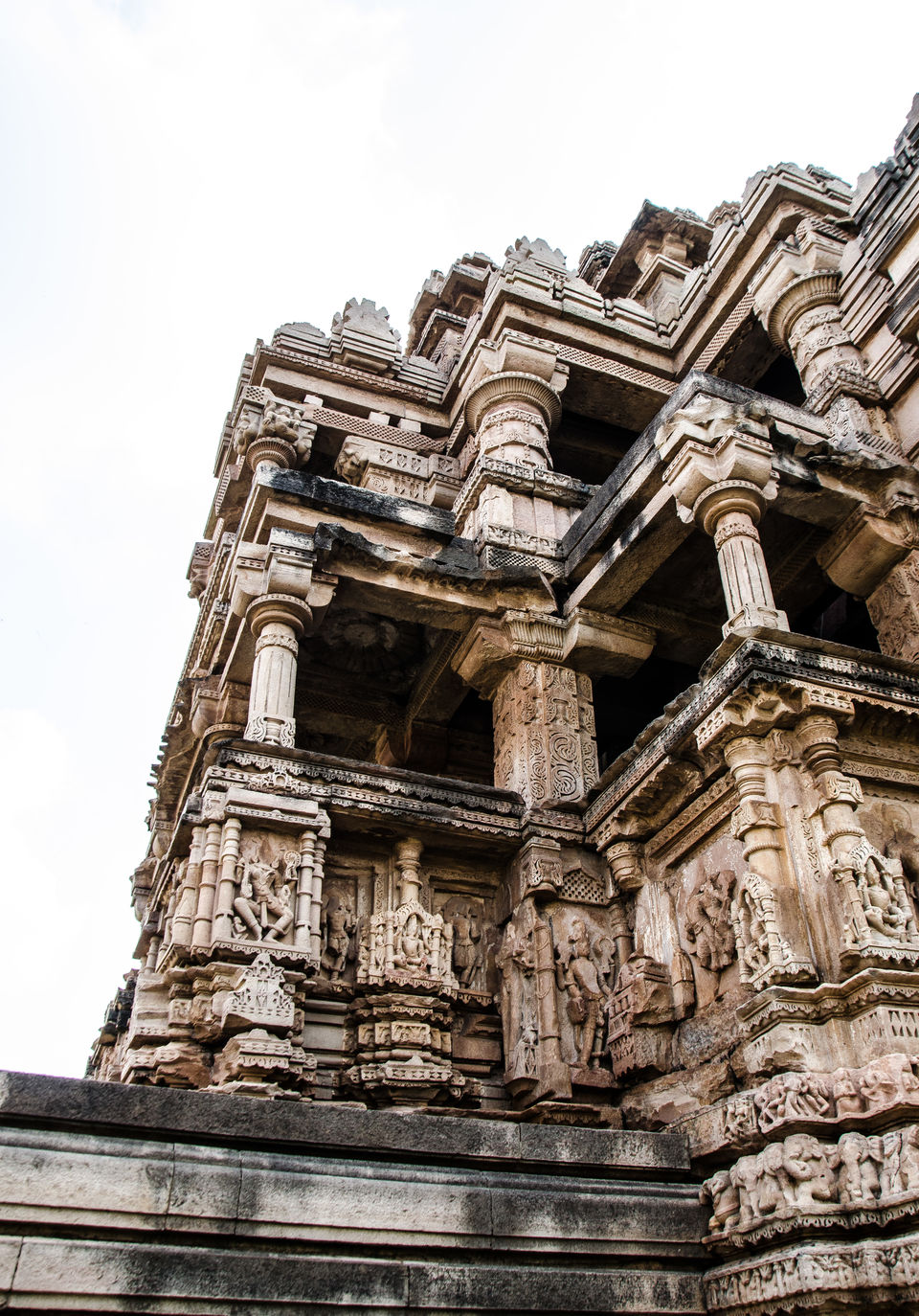 There are rock cut images of the Jain tirthankaras on both sides of the slope of the Urwahi road, and some of them are colossal in size. Some of the images are seen standing and some seated, while all are sheltered in rock cut niches or small caves. The rock cut Jain sculptures were mostly made during the rule of the Tomars in 15th century CE, and are unique because of their sizes as well as their numbers. The largest murti is that of a standing tirthankara half along the Urwahi road, which is 57 feet tall. 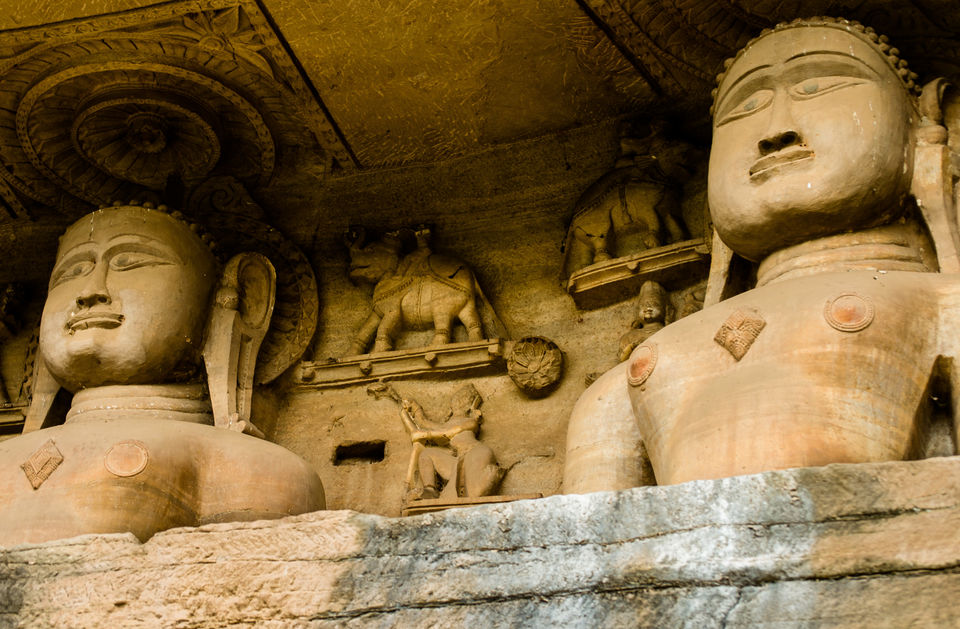 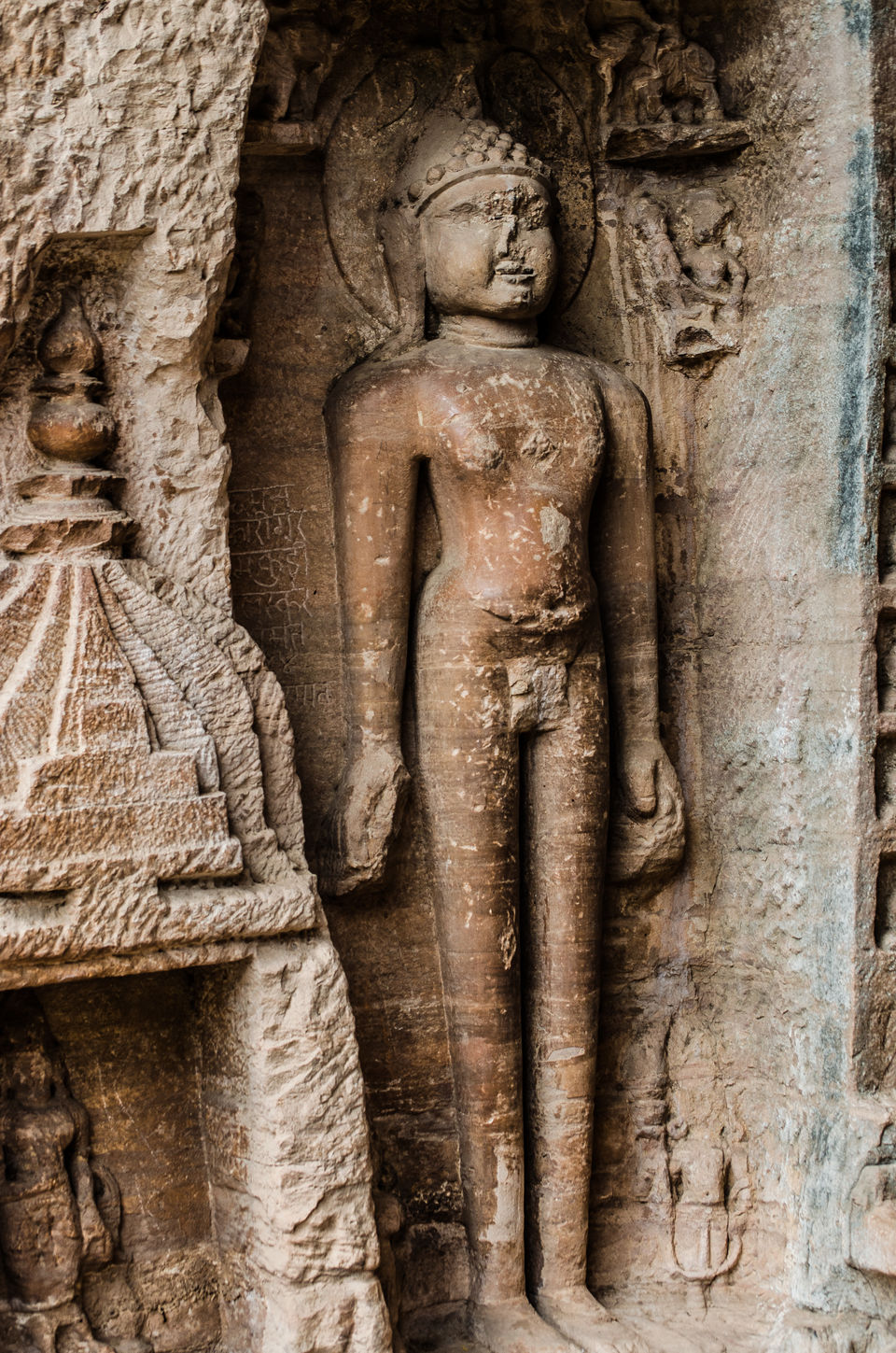 The Gwalior fort has many other monuments to visit, the most important among them being the Gujari mahal. This beautiful palace was built by Raja Man Singh in the 15th c. CE for his favourite queen Mriganayani. It is now a museum and houses priceless artefacts. There is another museum housed in a building near the Man Mandir palace, which also holds priceless artefacts, unfortunately photography was not allowed inside when we had visited. There is a gurudwara within the fort premises named Gurdwara Data Bandi Chorh Sahib, which is associated with the imprisonment and subsequent release of Guru Har Gobind Sahib from his confinement within the Gwalior Fort prison (17th century). 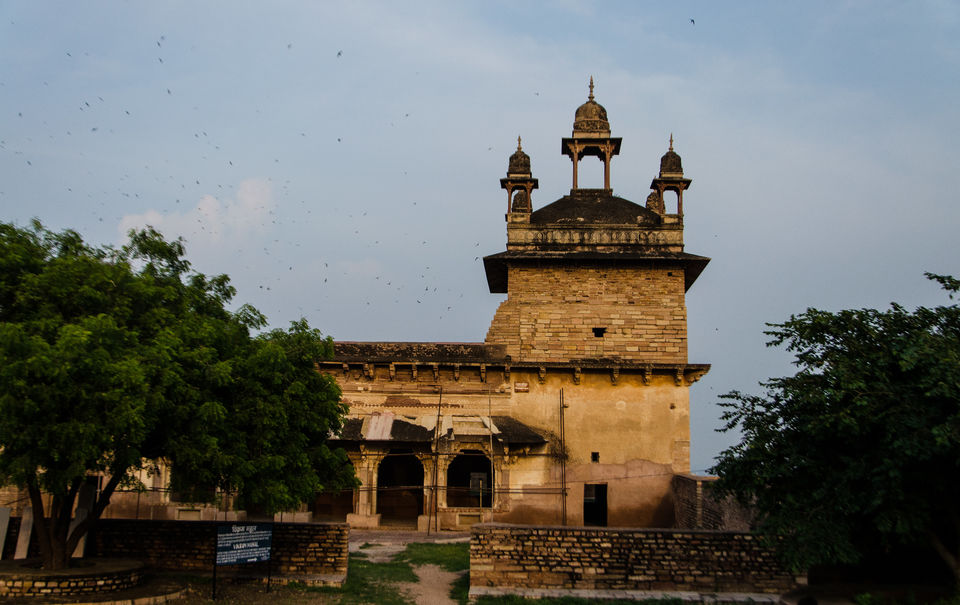 When to go: Gwalior is best explored during the cooler winter months, or during the monsoons when the place turns a beautiful green. The summers can get pretty harsh here, so best avoidable. The fort will take one whole day to explore, and there are many other monuments to see in the Gwalior city besides the fort, and even outside the city in nearby places, so 2-3 days stay is advisable.