A Few Days In Himachal...

Sometimes mythology is more interesting than history. And if it is related to Ravana, the most infamous character of Ramayana, no doubt, everyone would like to hear the story. We could have missed the story if we were not visiting the Baijnath temple situated 16 km from Palampur. It was our last day in Dharamshala and we were all set to visit Palampur. 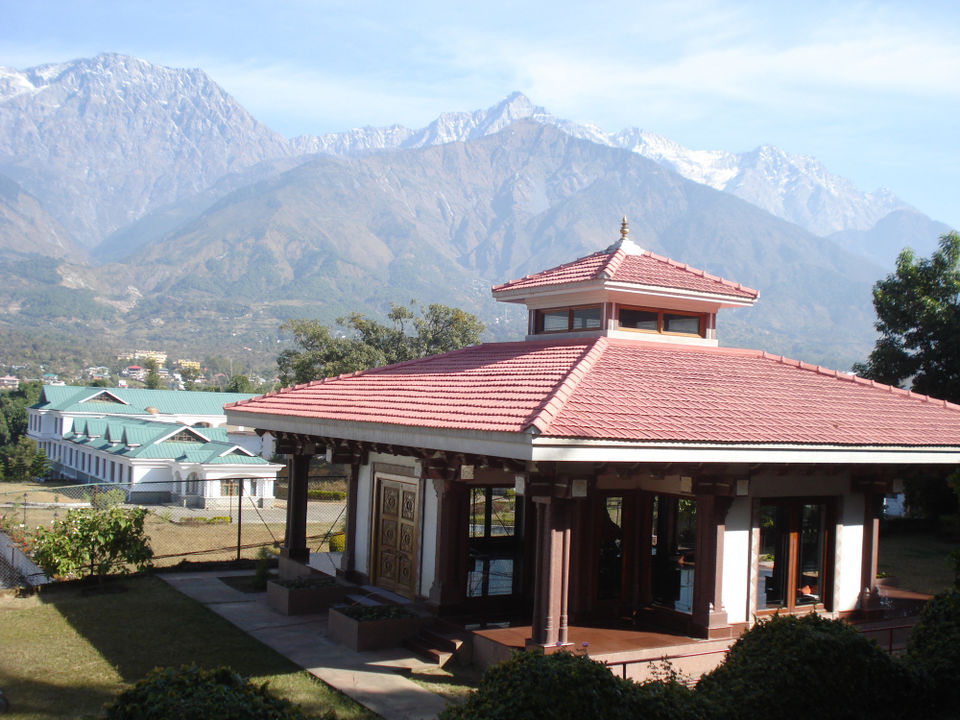 On our way to Palampur, we stopped by the Chinmay Tapovan at Sidhabari. Chinmay Mission was established by Swami Chinmayananda, the world famous Vedanta teacher and great exponent of the Gita. Here in this tapovan, Swami Chinmayananda breathed his last. It is a centre for Sandeepany Vedanta course, camps and Chinmaya Rural Primary health and training centre. 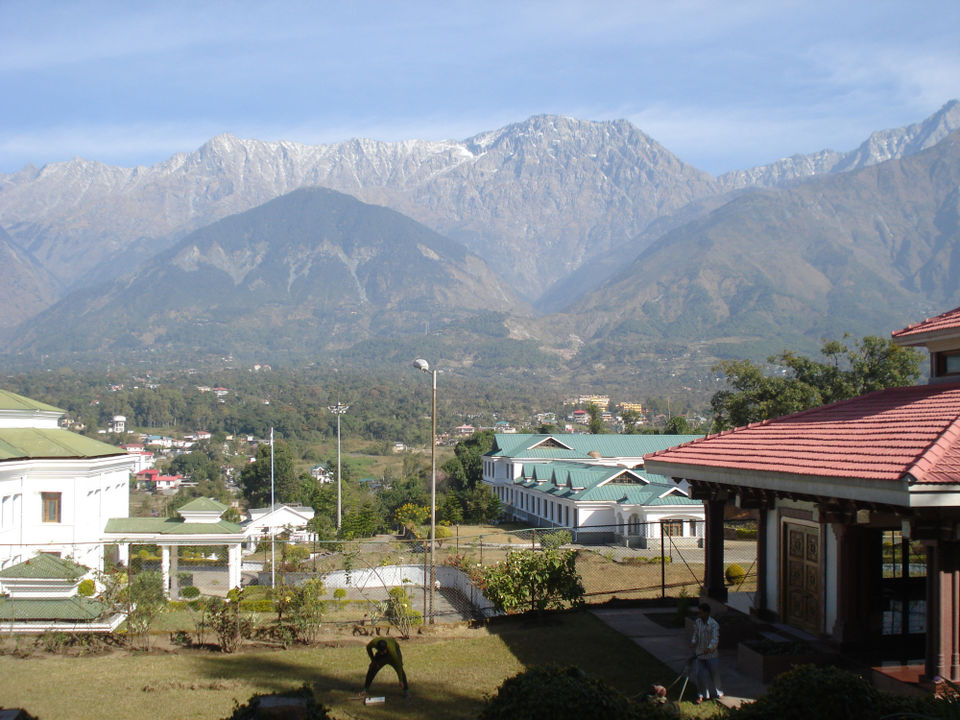 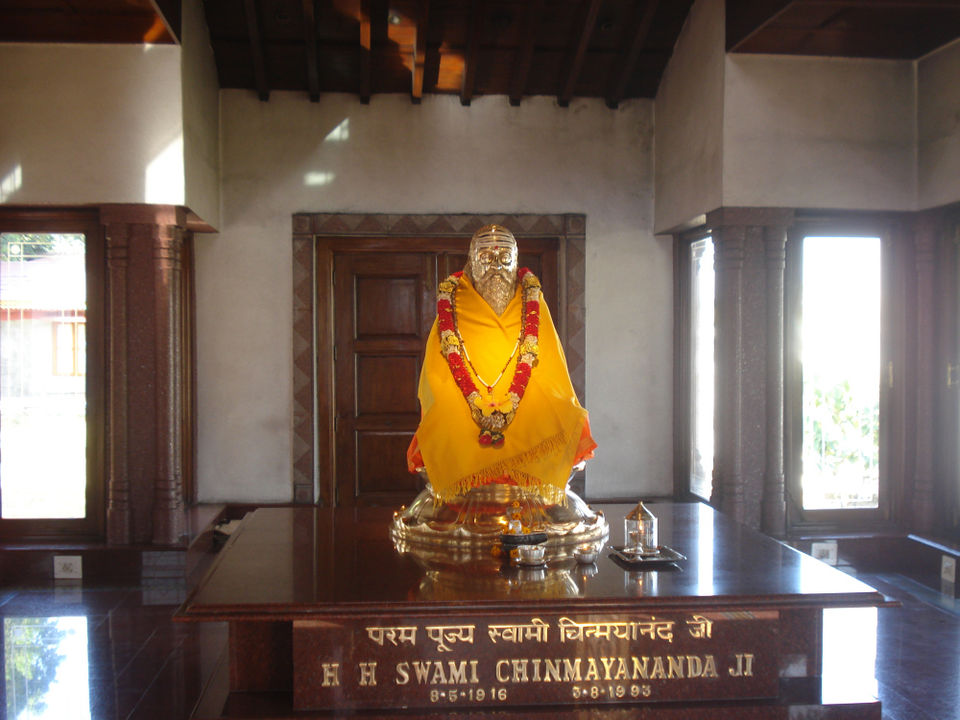 The tapovan is situated in a calm and serene place. The unparalleled view of the Dhauladhars, the scenic beauty and the tranquillity in the atmosphere, I wondered, may be these majestic sky reaching mountains, the grandeur of the nature make us more introspective and people those in search of eternal peace and truth, come to the mountains . It felt as if the power of silence made time standstill for a while. 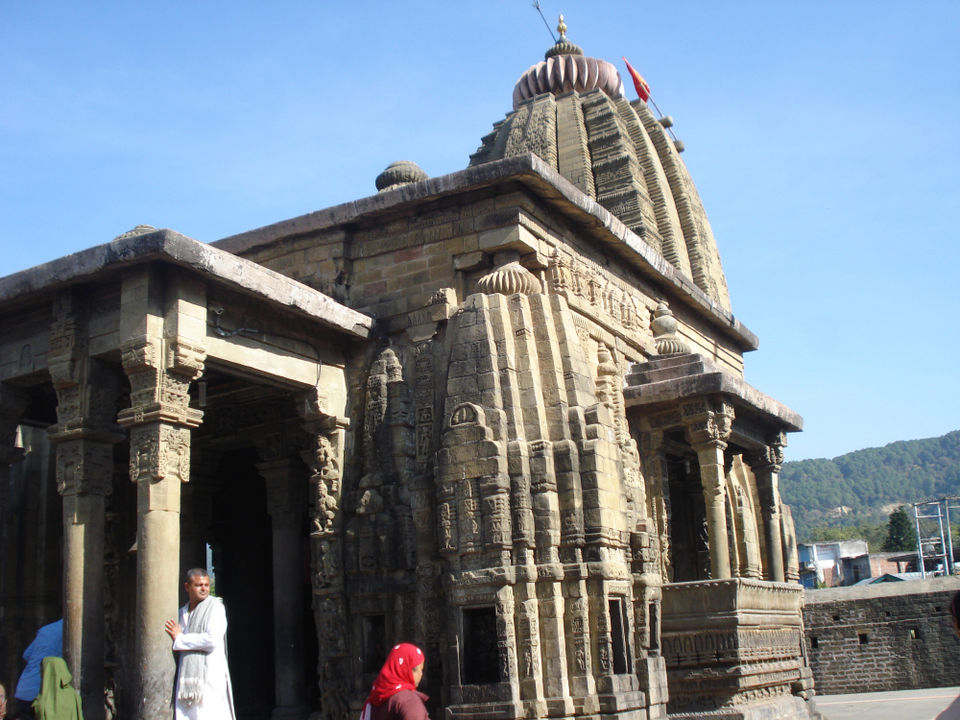 After visiting the complex, we left for Palampur.

Baijnath is famous for the Shiva temple built around 1204 A.D. Situated around 16 km from Palampur, this temple shows Nagara style of architecture. It is also known as Jyotirlinga Sri Chandrabhal Baidyanath (Baijnath) of North.

According to the mythology, in Kailash, once Ravana took the arduous and rigorous path of worship of Lord Shiva to attain the boon of being invincible and supreme. Shiva was pleased with his worship and Ravana requested to go with him in Lankapuri so that he could worship him and become the supreme power. Shiva agreed and took the form of Shiva Linga (the stone) but on condition that while going to Lankapuri from Kailash, Ravana should never put the Shiva linga on ground. Other Devatas (Gods and Goddesses) felt that if Lord Shiva left Kailash, they would become powerless and so to stop Ravana, they thought of a plan.

On his way to Lankapuri, Ravana halted here (Baijnath) for nature's call and requested a shepherd (named Byajju) to hold the Shiva linga until he came back. But the shepherd, holding the heavy stone for a long time placed it on the ground. This shepherd was none other than Lord Ganesha! And on returning, Ravana could not lift the stone and it got established there. Thus, Shiva or Vaidyanath came to known as Baijnath in Himachal. Major festivals are celebrated here with great enthusiasm. But in Dussehra, when the whole country celebrates the festival by burning the effigy of Ravana, here it is not celebrated as a mark of respect to Ravana. Ravana was an ardent devotee of Lord Shiva. 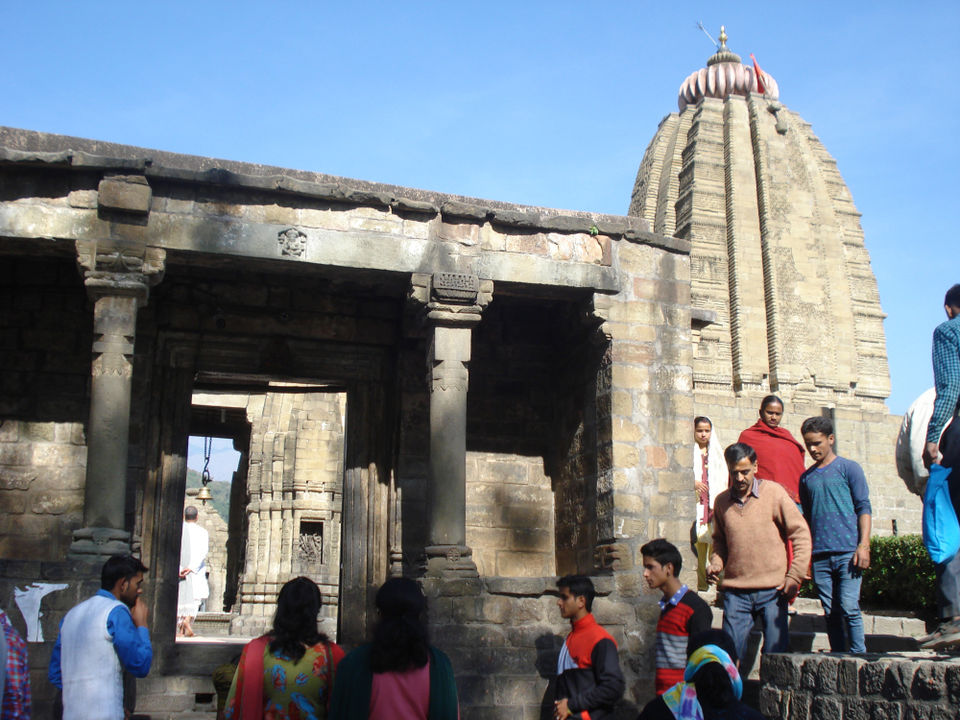 The temple is small but beautiful and now it is a protected monument under the Archaeological Survey of India. A major earthquake shook the entire Kangra valley in 1905 and it has affected the shrines and monuments, forts in the valley. This temple was also badly affected.

From Baijnath, we returned to Palampur for lunch break. On our way back to Dharamshala, we visited the Gyuto Tantric University (Monastery). The second Ramoche Temple of Tibet is re established here. The monastery was initially in Lhasa, but after the Chinese invasion in 1950, the Gyuto monks fled to India in 1959. In 1996, this monastery was inaugurated and it is now the centre for Tibetan tantric studies. 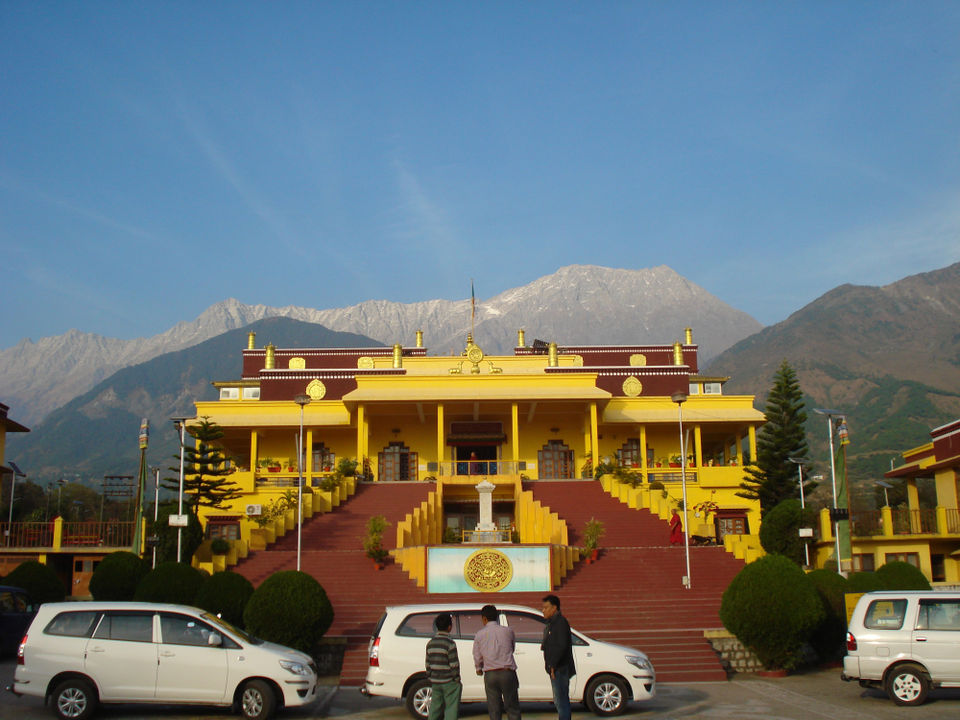 As usual, inside the monastery, there is a big statue of The Buddha and also it is gorgeously decorated with Tibetan artefacts and Thangka paintings.

The monks we saw were busy studying; chanting the mantras and it seemed that they were memorizing the texts from the sacred scriptures. I felt the environment more like a school where a buzzing sound of loud reading was coming out. 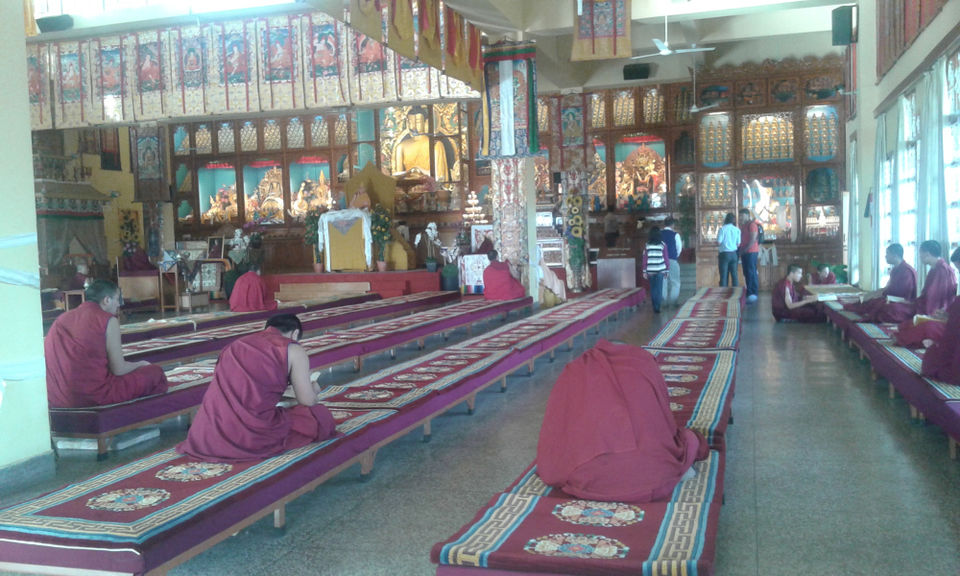 Also when we came out of the main monastery, the surrounding residential apartments of the monks reverberated with the chantings being practised by the aspiring monks. Later, I came to know that the Gyuto monks are known for their tradition of Overtone singing, may be, I have seen some glimpses of the process which will get more refined as time passes by.

Our tour in the mountains and valleys of Himachal was about to end. We made a quick tour of the picturesque Himachal Pradesh Cricket Stadium. 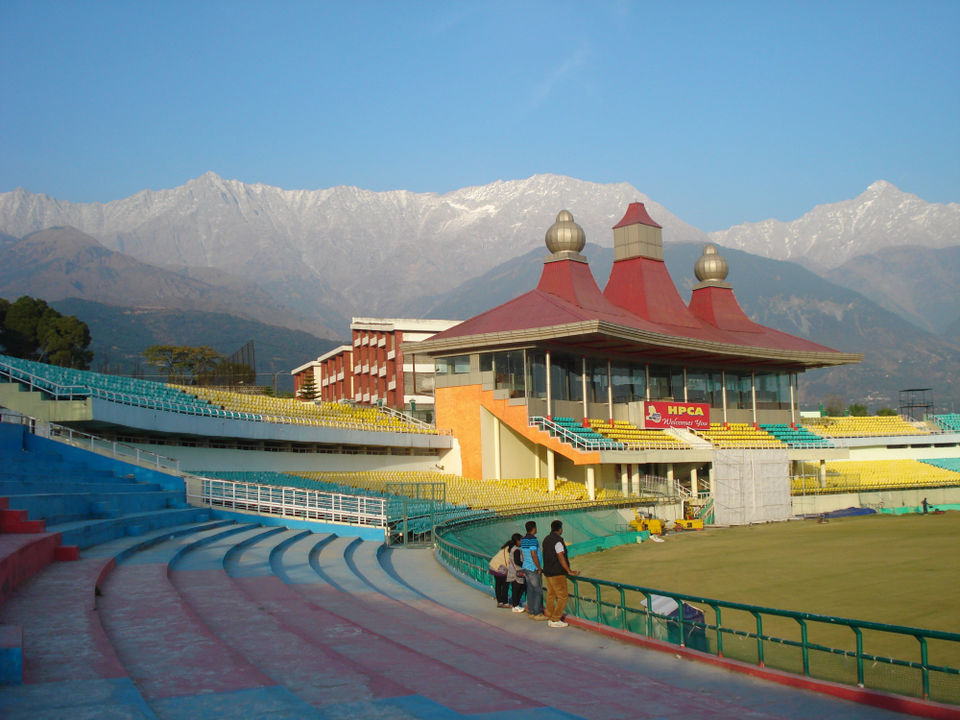 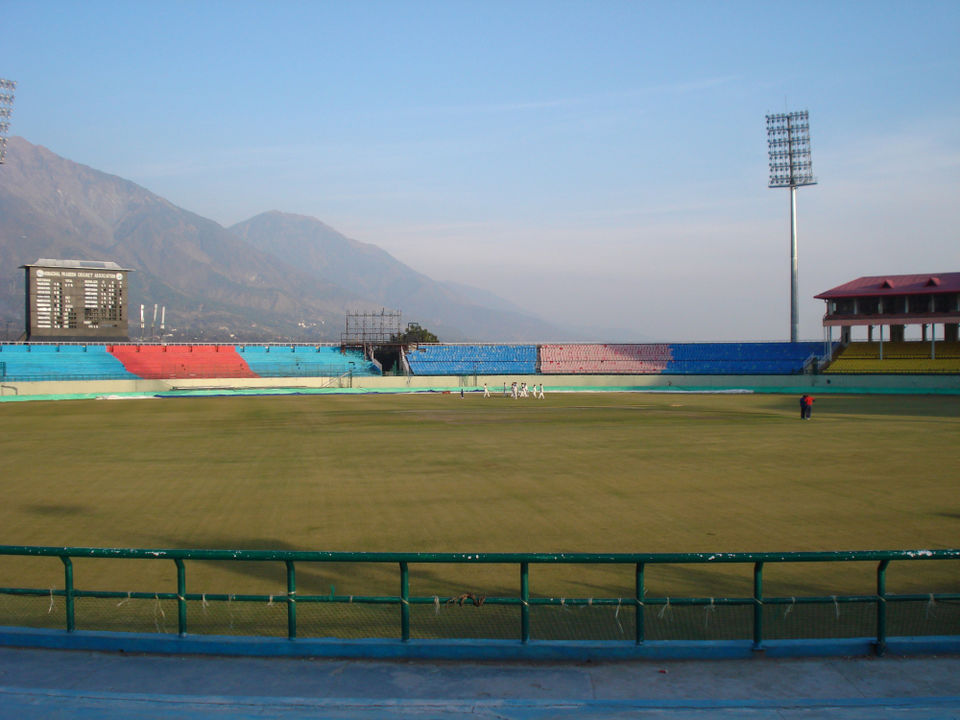 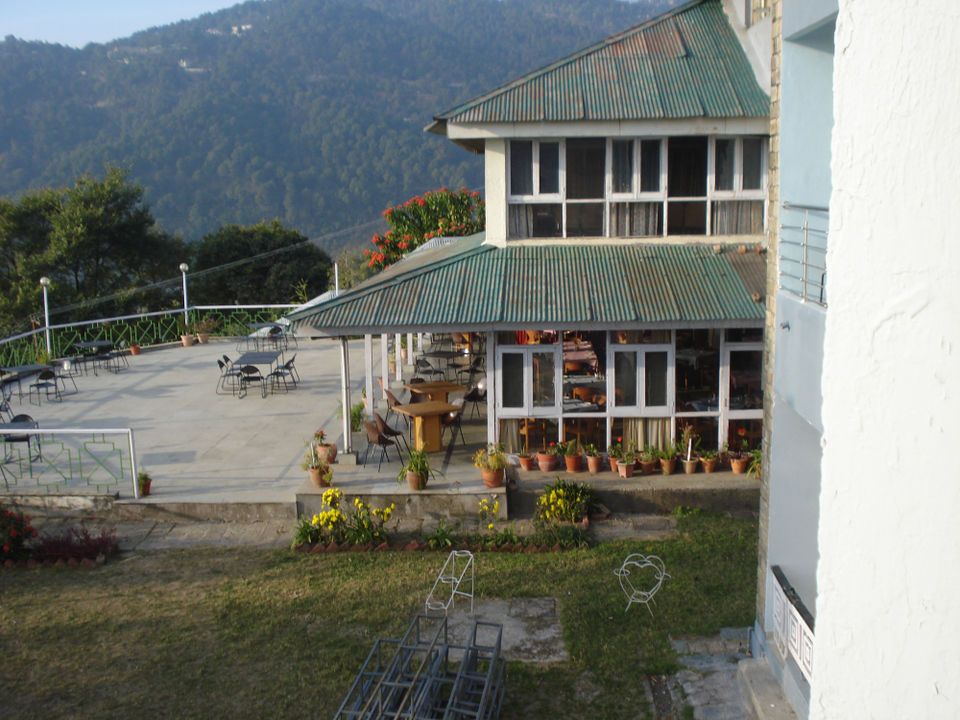 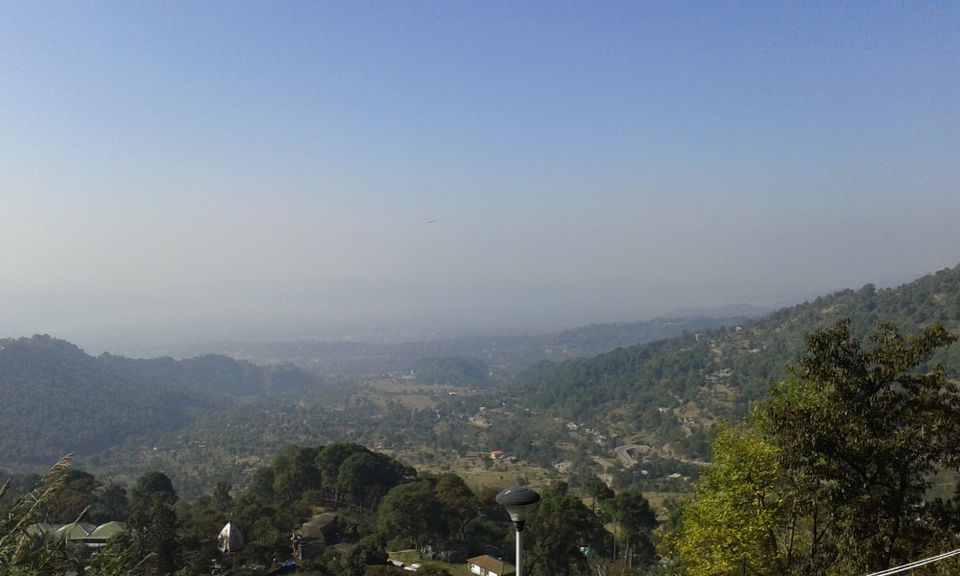 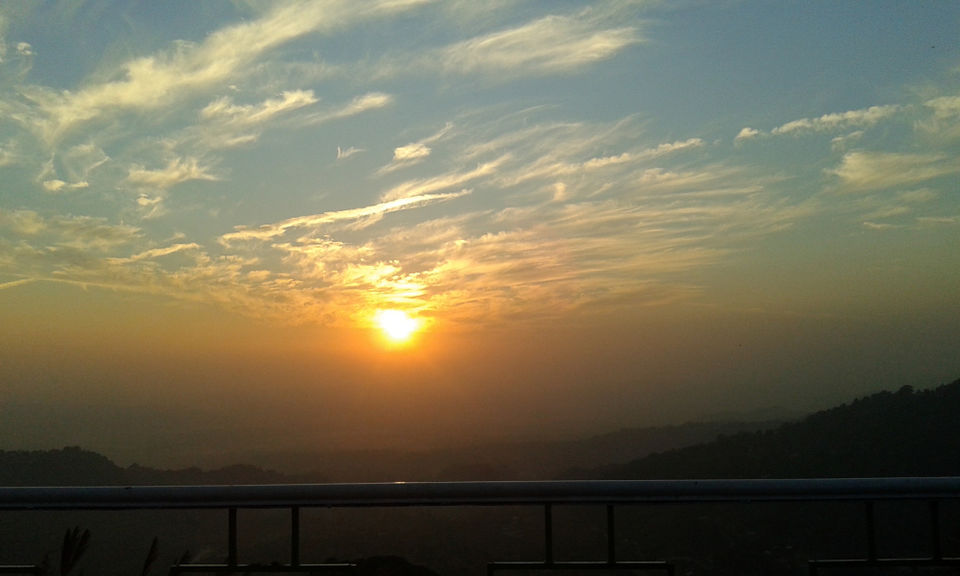 On our last day of Himachal tour, we shifted from the Upper Dharamshala (McLeodGanj) to Dharamshala HPTDC hotel. The hotel carries the charm of the colonial style. From the open terrace of the hotel facing the valley, with our evening cup of tea, we experienced another wonderful sunset between the mystic mountains and the foggy valleys. Truly,a grand farewell from the majestic Himachal.