GETTING SPITI IN TUK-TUK 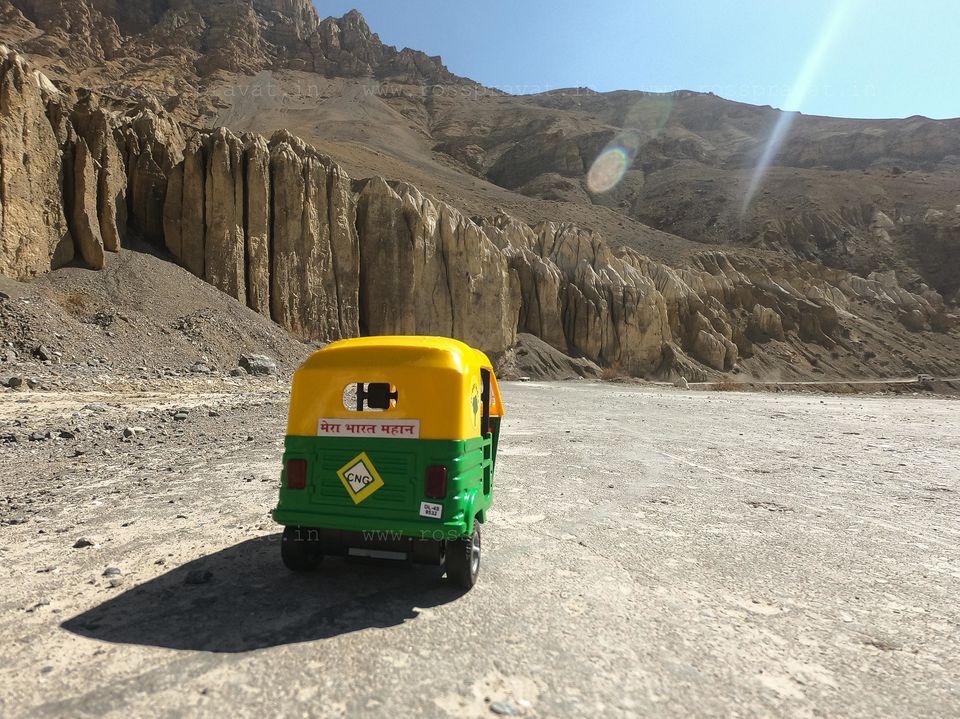 If you are a backpacker or a Solo Traveler or a biker, getting Spiti is once in a lifetime thing to do. Getting to Spiti in a Tuk-Tuk is an adventure and fun things to do in life. While Tuk-Tuk is the most common means of the public transport in plains of India, it is hardly visible in twists and bends of the Himalayas of India. And if you are adventure freak and don’t care about comforts then why not “Getting Spiti” in Tuk-Tuk.

Spiti Valley is a cold desert mountain valley located high in the Himalayas in the north-eastern part of the northern Indian state of Himachal Pradesh. The name “Spiti” means “The Middle Land”, i.e. the land between Tibet and India. There are two ways to go to Spiti one via Manali and Rohtang Pass and other via Shimla and Kinnaur. During Winter Manali and Rohtang Pass get close due to heavy snowfall and gets open for few summer months in a year. We took Shimla-Kinnaur route, it was early May just the transition period, from winter to summer.

Starting early from Shimla we reached Reckong Peo late in the afternoon. It was raining cats and dogs in Reckong Peo. We moved to Kalpa and settled in a guest house overlooking down to the valley. The night was chilly and it drizzled half of the night in Kalpa. The drizzling made the night freezing cold.

Peeping Down the valley at Kalpa 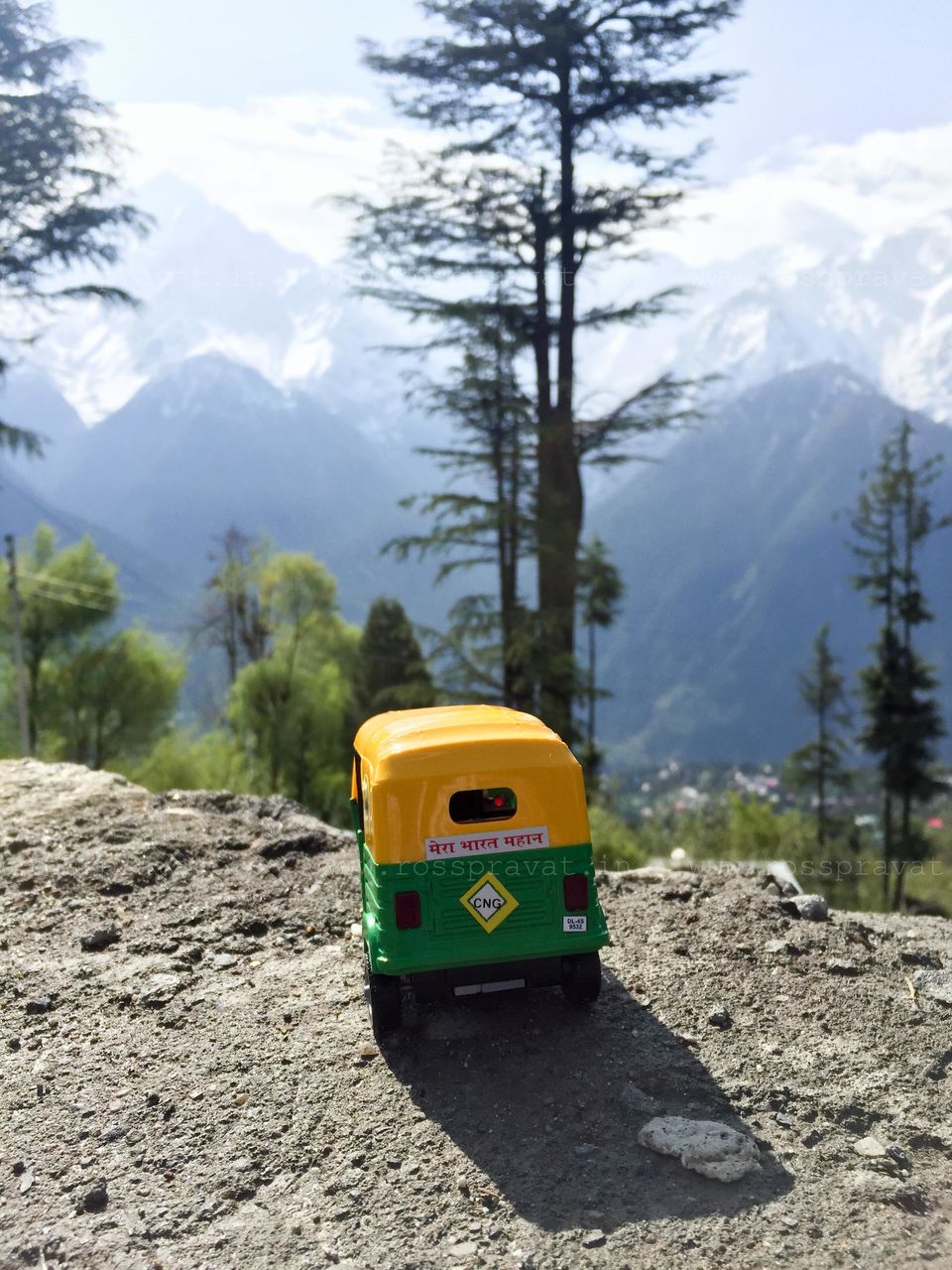 Next morning we wake up early to see the blue sky, and clouds kissing the high snow-capped mountains. Sun emerged from behind the glacial mountain spreading it golden beams of sunrays. Thousands of water droplet on the green leaves of the apple tree from drizzling of the previous night were shining like diamonds when sunrays passed through it. The location of our stay was perfect, Kinner Kailash, a mountain dedicated to Shiva was very vividly visible. Post breakfast, we went to explore a place known as a suicide point. Some 3 Km away from Kalpa. Suicide point is viewpoint which gives a direct view of gorge some 500 feet deep. And then continued our journey to Tabo. 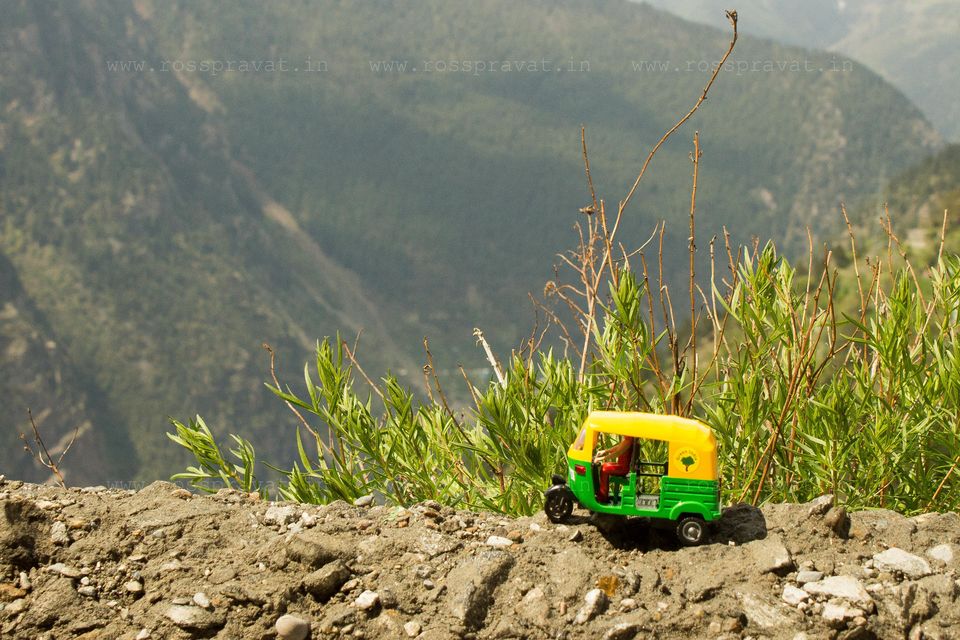 Somewhere in the midst of Green 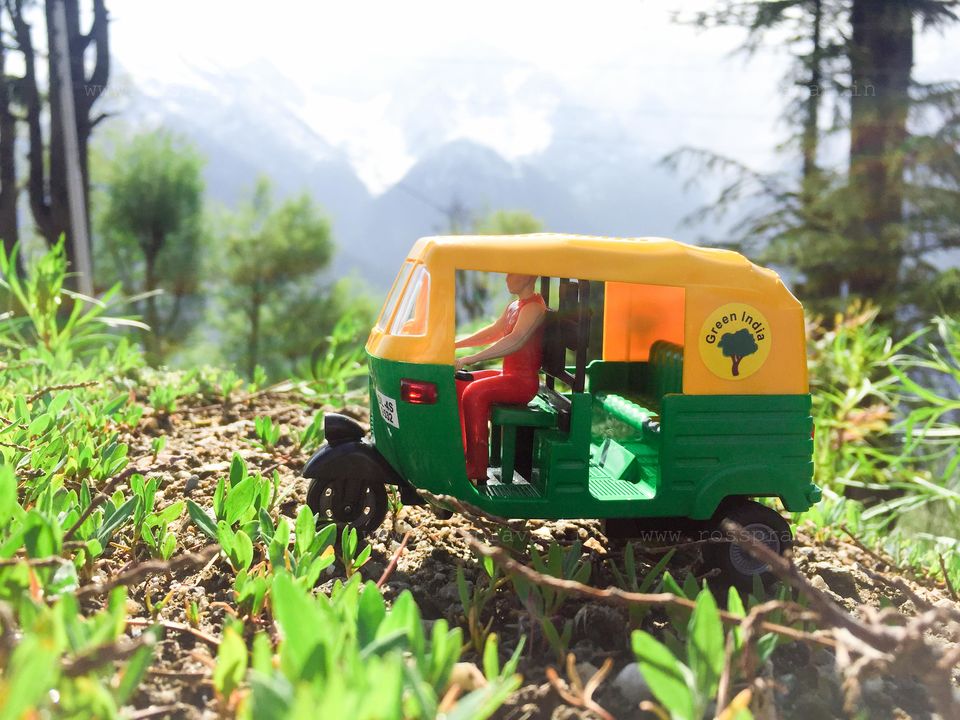 On our way, we stopped in a small village of Spilo on the bank of the river Sutlej, for a couple of hours due to landslides. The landslide was cleared by BRO and we continued for Tabo. It was almost dark when we reached the silent beautiful village of Tabo, some 200 Km away from Kalpa. We settled in a homestay to experience the amazing hospitality of Spiti. Though we were late, we were welcomed with a hot cup of tea. For dinner, they served us delicious dinner of Rajma-chawal (lentil and rice), which we enjoyed eating together, sitting around the Bhukhari (fireplace) and then went to sleep.

It was 5 O’ Clock, we woke up early to see the sun rising from behind the snow-covered mountains and to stroll around the village. The village Tabo houses Tabo Monastery, and it is the oldest monastery and continuously operating monastery both in India and Himalayas, since 996 CE. Tabo Monastery is also known as “Ajanta of Himalaya” and it is famous for its rare collection of scriptures, pieces of art, wall paintings -Thankas and Stucco. 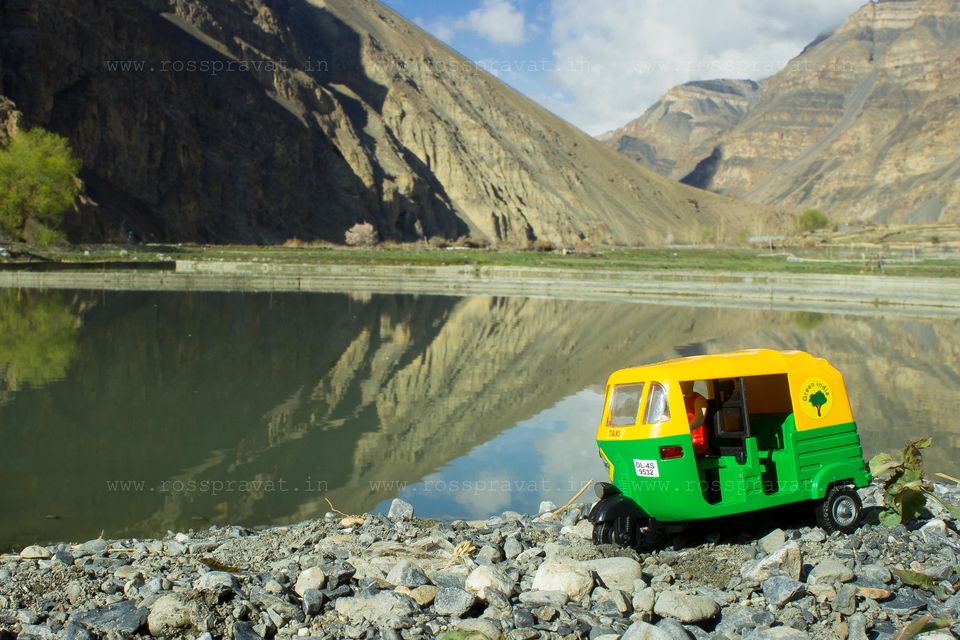 Driving along the bank of river Spiti for some 30 Kms, on the foothill of the mountain ridges, we reached the Dhankar Monastery. At the elevation of 3,894 meters (12,774 feet) above sea level, Dhankar Monastery overlooks the confluence of Spiti and Pin river. Dhankar was capital of Spiti in 17th Century.

From Dhankar we started towards Kaza. But instead, we cross the Spiti river and went to the Pin Valley National Park. Driving along with the Pin river we reached the village of Gulling. Settle on the bank of Pin river, Gulling has a small population of 130 people. That night we settled in a homestay at Gulling owned by the local school teacher. The night was chilly and the wind was blowing harshly. But the sky was clear to see the milky ways and the falling star.

Ibex, Blue sheep, Red Fox and Snow Leopard, the wildlife of Pin Valley National Park. And we saw Ibex’s grazing on the mountain ridge. Only lucky one only gets the chance to see Snow Leopard. Snow Leopards generally remains at high snow-covered peaks away from human civilization. Snow Leopards are proficient at camouflaging themselves with snow and mountain ridges. 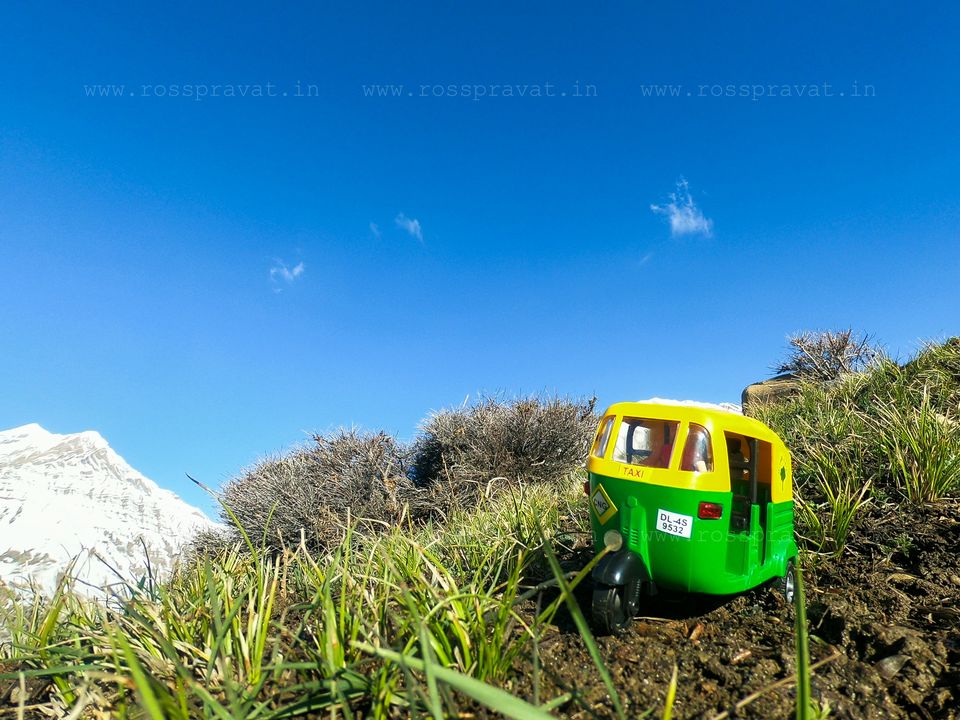 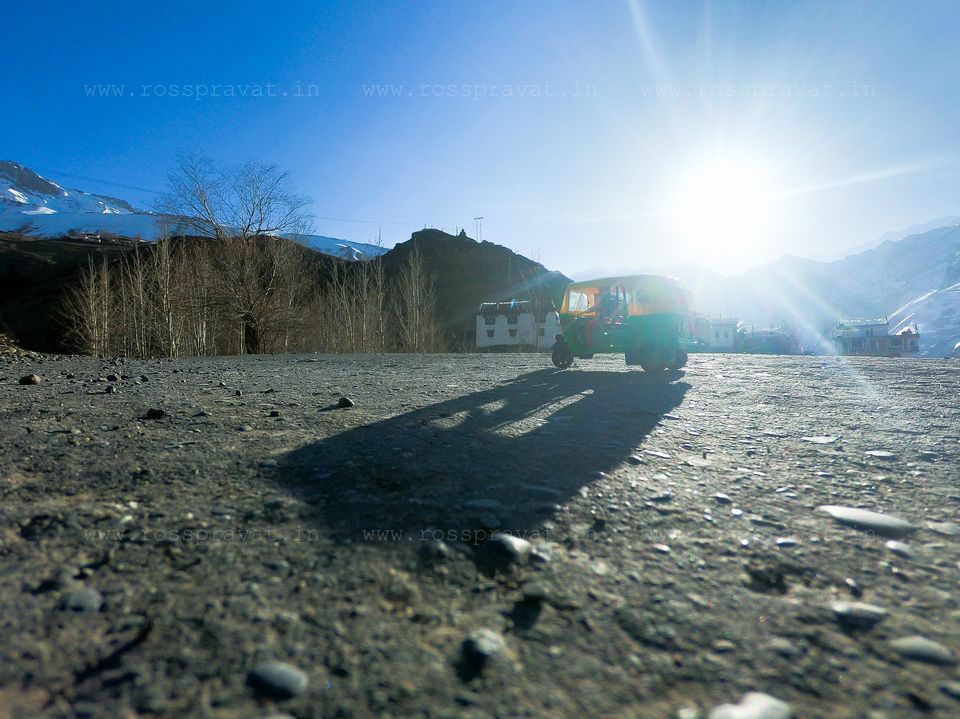 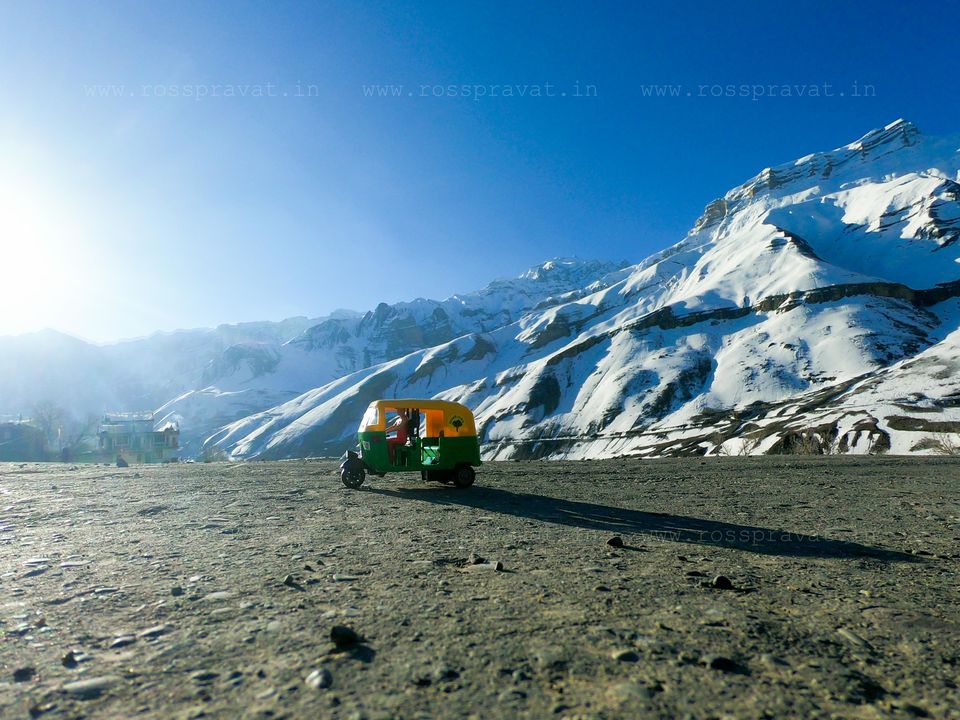 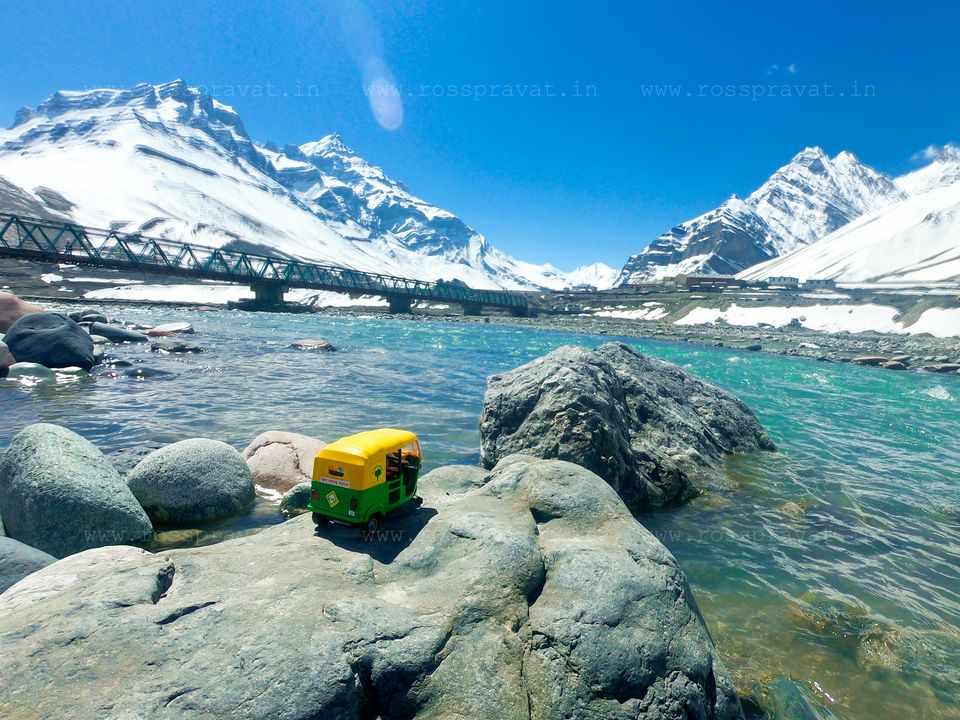 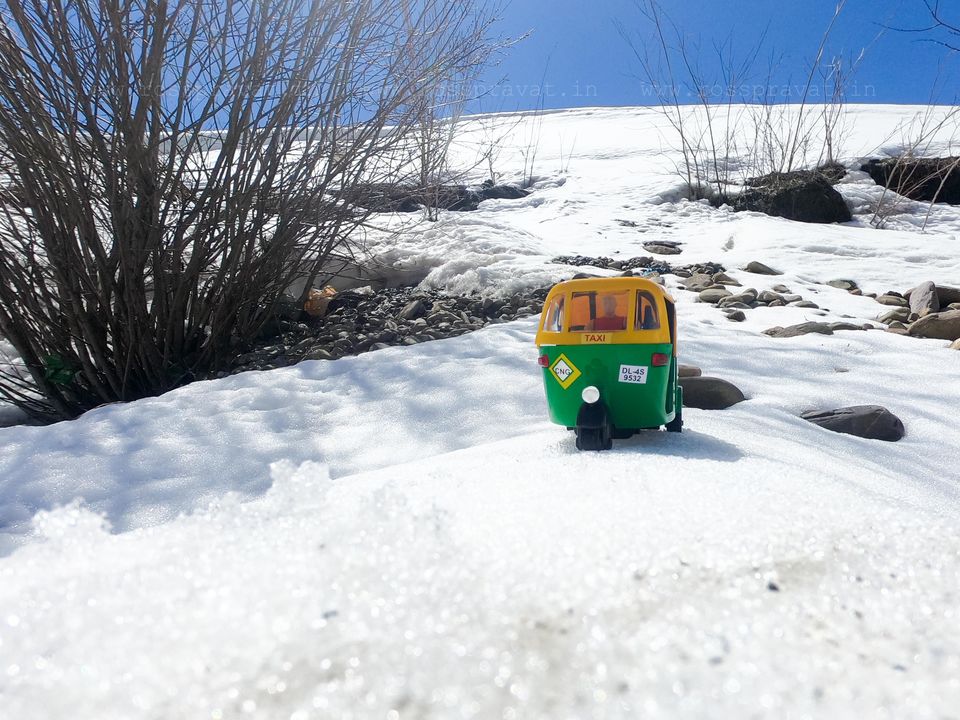 Starting late in the morning with a bright shining sun we went deeper inside the park, to visit the small scenic village of Sagnam. Settled on the bank of river Pin, the Sagnam village looks desolated with few numbers of houses.

Riding around Snow at Sagnam Village 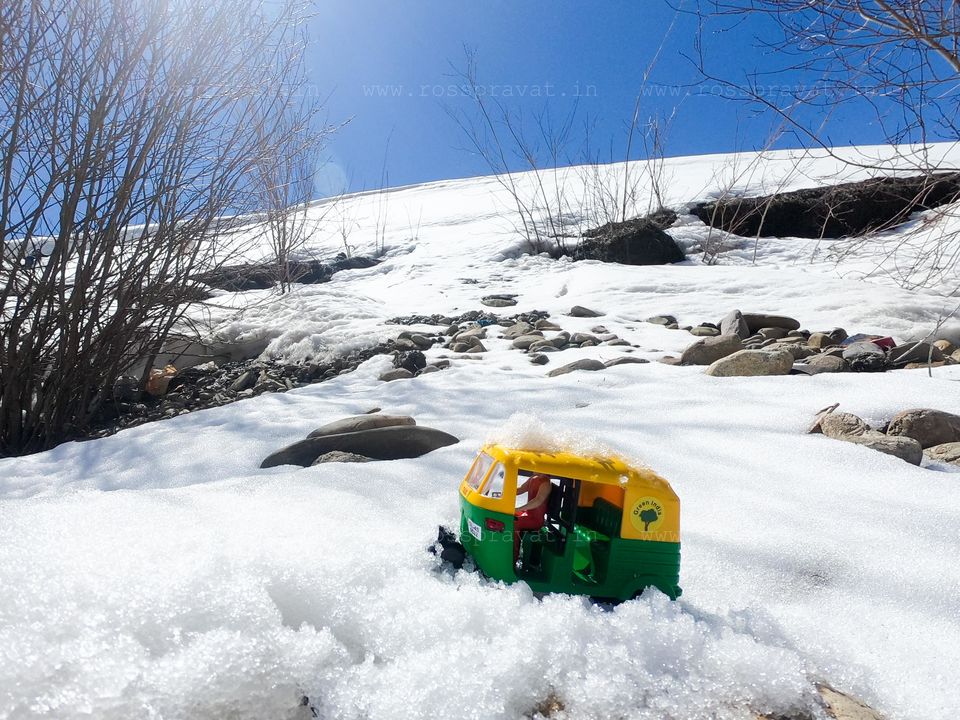 From Sagnam after covering a distance of 40 km via the village of Gulling we reach the silent little town of Kaza. Kaza is a place of importance for locals as it provides foods and medical supplies. And for the tuk-tuk, Kaza is a place to get some wash, repair and refuel at world highest retail outlet of Indian Oil.

We settled down in the homestay and enjoyed the local delicacies at lunch. After completing our lunch we visited the Key Monastery, which is the biggest Monastery in the Spiti region. The Key Monastery standing tall in a hillock, beside a high mountain ridge, is the Landmark of Spiti Valley. 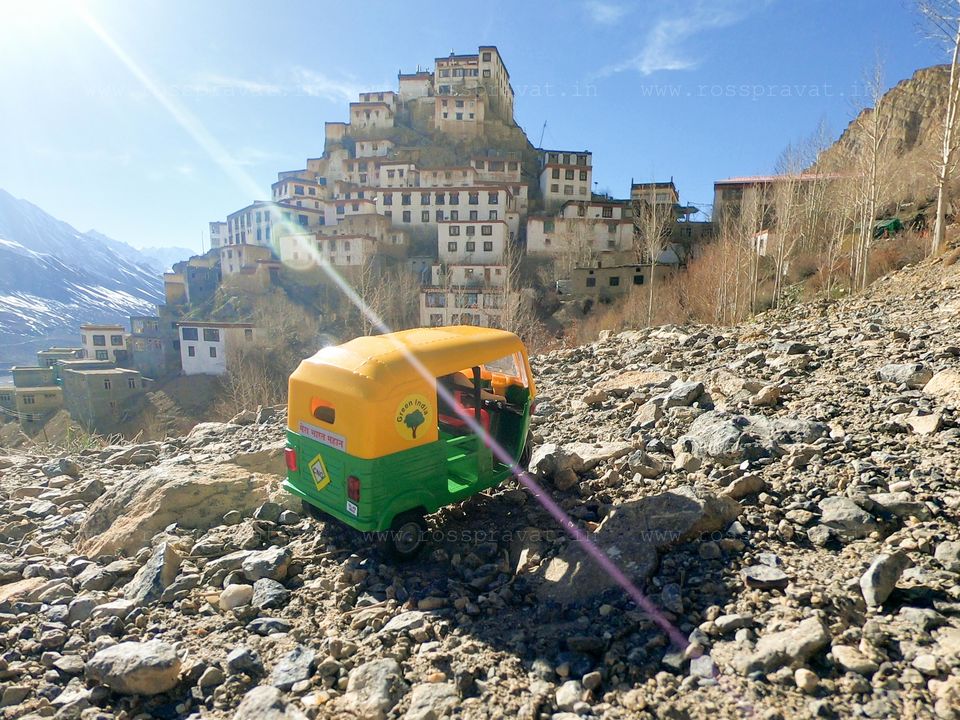 And then we return back to Kaza. In the evening we sat around the bonfire and shared stories, watched star and milky ways and after dinner, we went to sleep.

Next morning we woke up early to stroll around the Kaza and on the bank of river Spiti. The month of May is the cultivation season and the hard-working peoples have already woke up early in the morning working in their fields. The live stocks were taken out to green grassland for grazing. Pea and Barley are the main crops grown here. It was Sunday and we were amazed to see, the Kaza Market has shut itself for the cleanliness drive. People of Kaza were busy cleaning their places outside their shops and houses. The people of Kaza are so much aware of plastic waste that they have banned the use of polythene in Kaza.

Strolling around river bank of Spiti at Kaza. 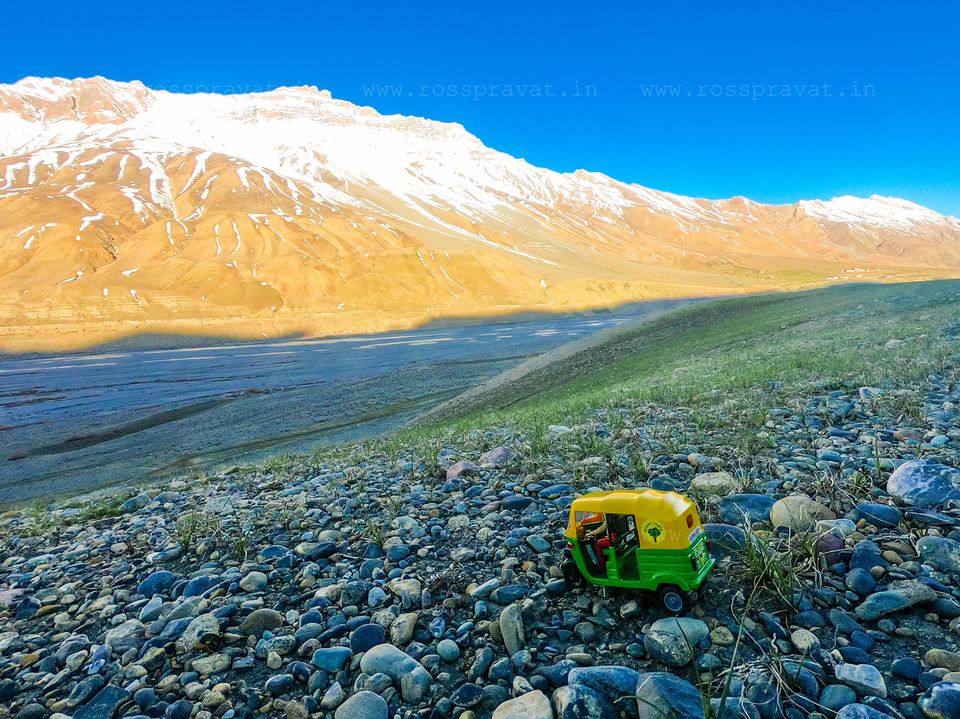 After breakfast, traversing across the mountains, following the dusty track made by the tyres of vehicles passed earlier, we reached Hikkim. Hikkim is the village where the World Highest Post Office lies; pin code 172114, at height of 15,027 feet above sea level. There is a tradition for every traveler visiting Hikkim to post, postcard back home from World Highest Post Office. So we did it too.

Some 2 Km ahead of Hikkim at the height of 14,400 feet above the sea level lies the village of Komic, the World highest village connected through motorable road. And also a restaurant which claims to be the world highest restaurant, which is a good place for midday food. The village also houses Tangyud Monastery. The Monastery also has an original skin stuffed Snow leopard in the display.

From Komic driving through the muddy track and crossing numbers of rapidly flowing streams fed by the melting to snow, we reached the village of Langza. Langza is famous for the huge statue of Buddha overlooking the valley. Legend says the statue of Buddha in Langza, in golden color, is around 1000 years old. The prehistoric remains are also found in Langza and hence it is also known as the Fossil Village of Langza.

Bidding farewell to Langza we descended down to Kaza and spent the night at Kaza. Next day in the morning we left Kaza and exited from Spiti.

Note: The above journey is not done in Tuktuk. The tuk-tuk in the picture is a toy and is used for representational purpose. Used for the sole purpose of storytelling. 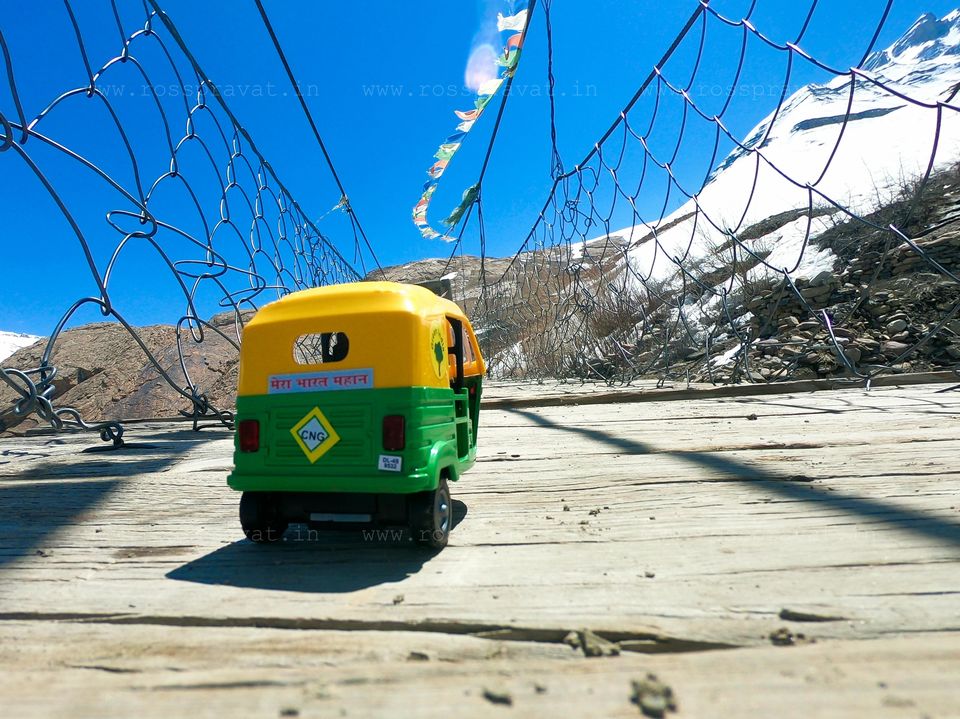