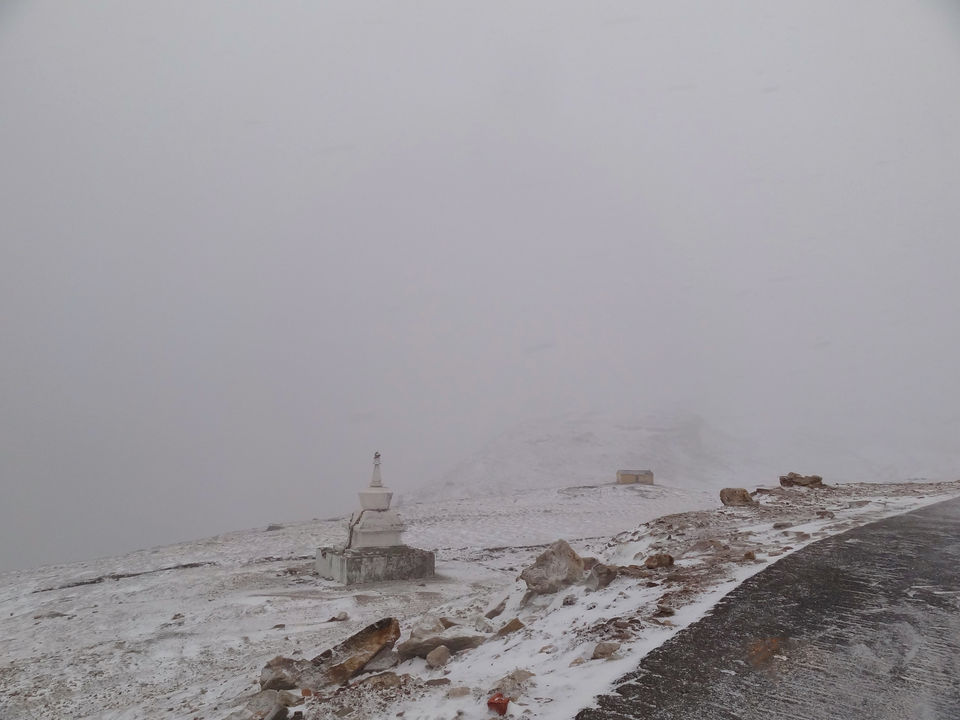 It was an ordinary package trip to visit Shimla – Manali, the two most beautiful hill stations of Himachal Pradesh at the end of October. But right from the beginning, this trip was full of surprises that ended up in Rohtang Trip with great memories that I would love to cherish all my life.

The trip started after reaching Chandigarh by train around 6 in the morning. The bus was waiting at the outside of Chandigarh Railway station. We boarded the bus and headed towards Shimla along the National Highway. The early morning ride through the almost empty four-lane tarmac was really enjoyable. On the way, we took a stop once at a roadside Dhaba for breakfast. We finished our breakfast with Methi Paratha and achaar. It's a Punjabi dish that I had never tasted before. It was so delicious and quite filling too.

We reached Shimla by 10 am. I was sharing the room with another girl of the almost same age. We got refreshed and by the time we were done with lunch, it was around 2 pm. After taking a short midday nap, we together stepped out to take a stroll around Shimla.

We first dropped at Shimla Kalibari. It was a 10 minutes walk from our hotel. After darshan, puja and admiring the stunning views of the Himalayas from the temple courtyard, we headed to the Mall.

Shimla Mall was another 10 minutes walk from Kalibari. The sun was started setting by then. The ever beautiful Shimla Mall was looking amazing by the light of the setting sun.

Next, we peeped into the famous Christ Church at Mall road, the second oldest Neo-Gothic Church in North India. The stained glass windows enhance the beauty of the interior. The photography is restricted inside. Then, we went to explore the bazaars of Shimla.

Needless to say that Shimla Bazaar offers a wide variety of Woolen products. After hopping almost all the shops in the lower and upper Bazaar, buying some woolen garments and stroll by hard bargaining, we made our way to the hotel. It was almost 8.30 pm by then. We started feeling cold too although the day was pleasant. We took a stairway going up near Kalibari instead of walking the road and reached the hotel within half an hour.

The panoramic view of Shimla Kalibari 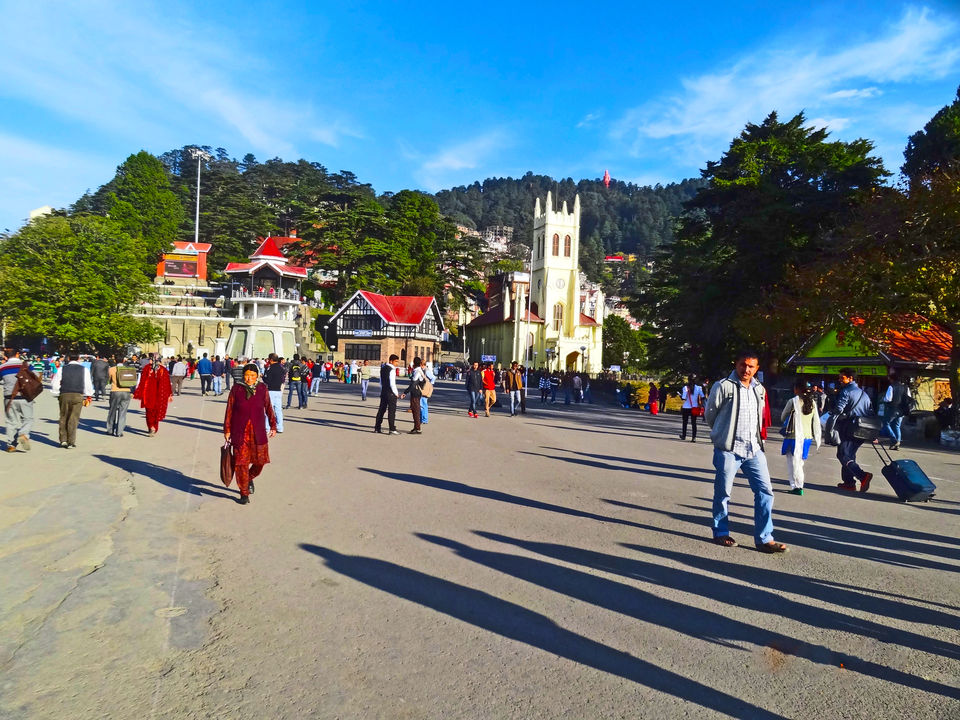 The next morning, we started for Kufri. A tiny hill station is 15 km away from Shimla, at an elevation of 9000 feet. The journey along the Himalayan road flunked by the lofty mountains and deep valleys was enchanting. Soon we reached the Parking area from where you have to make a short hike of 2 km through the woods to reach the top. There was a Pony stand near the Parking lot. You can avail a pony instead of hiking. I, in fact, we all opted for Pony and reached the top within half an hour. Beautifully decorated yaks are also available there. You can ride one and feel the thrill.

Kufri offers a panoramic view of the Himalayan landscape. There is a Telescope room that enables us to see the Palace where the Aamir Khan starrer Bollywood blockbuster ‘3- idiot’s’ was shot. Besides, there is a small Nag temple and a few tea stall. After soaking in the pristine beauty of the Himalayas, we came down.

There is a Nature Park, a few steps away from the parking zone. You can spot Barking Deer, Musk Deer, Wolf, Leopard and other wildlife in this zoo.

On our way back, we stopped once at a viewpoint called Silent Valley that offers a spectacular views of the valley surrounded by tall pine trees.

On the way to Kufri Top 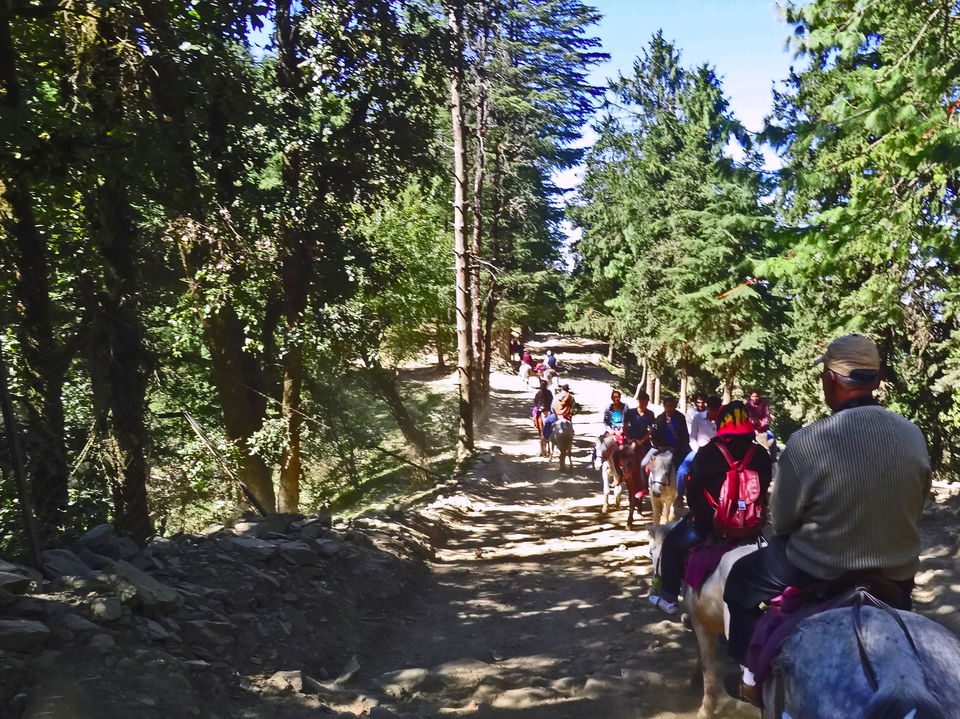 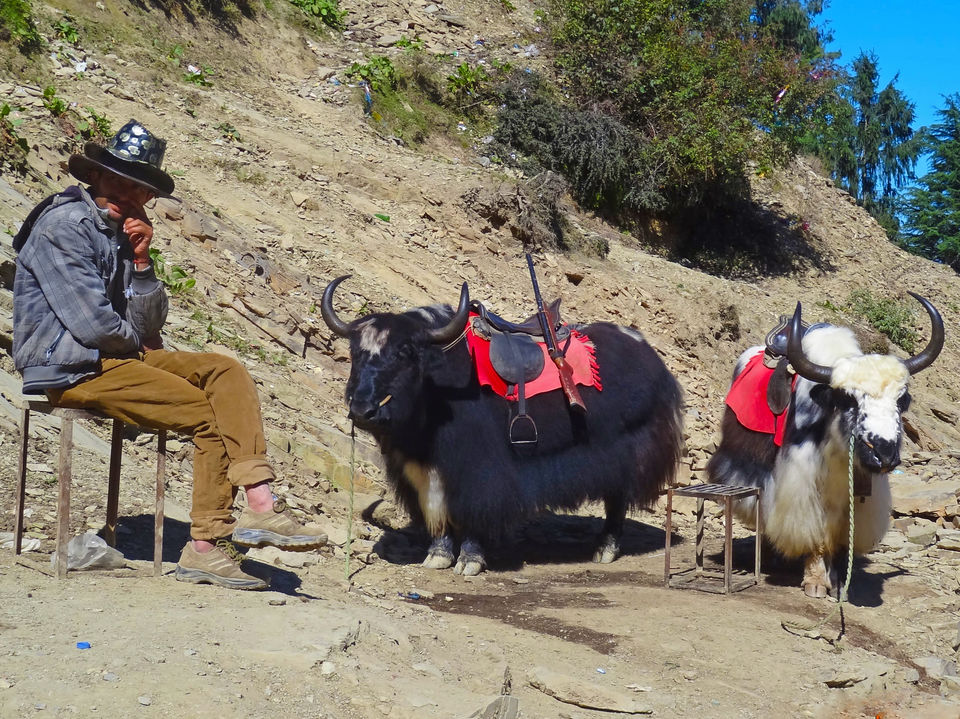 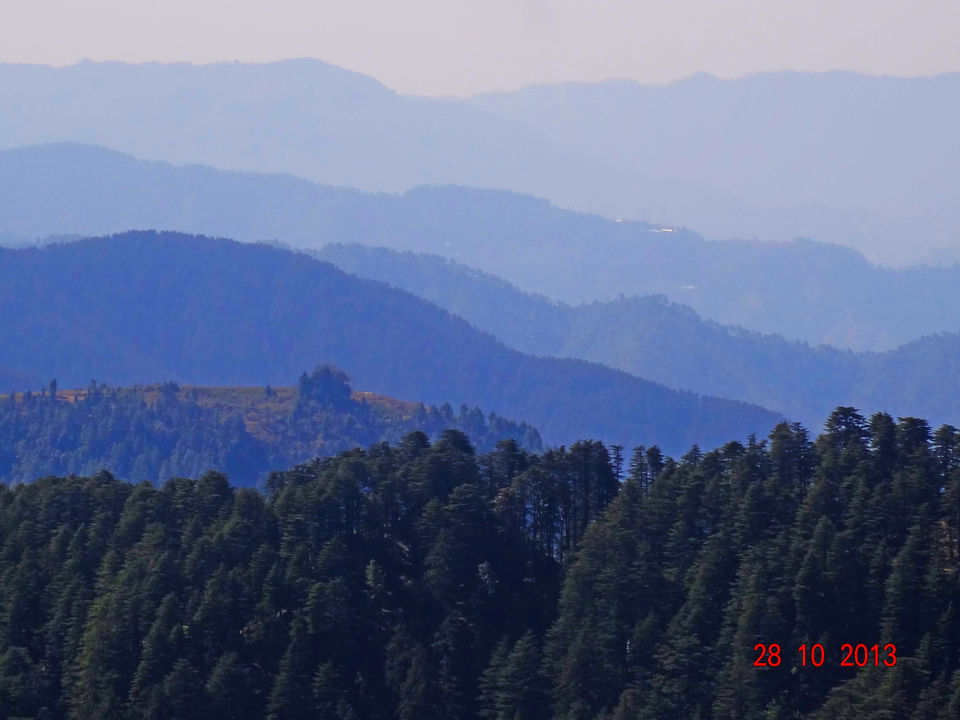 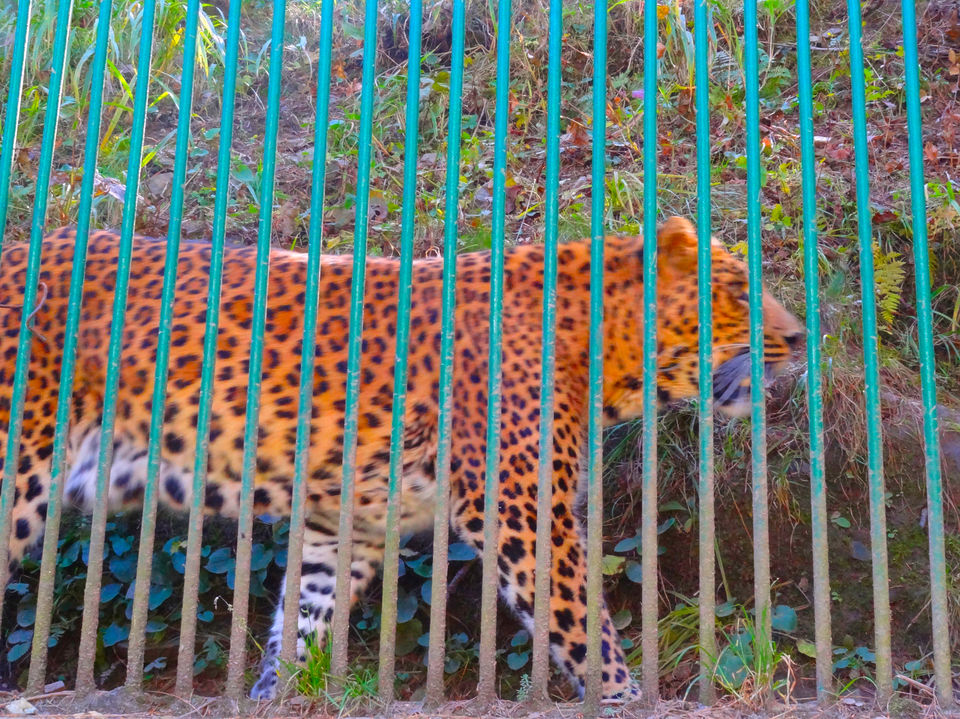 Set out for Manali

The next morning, we set out for Manali as early as 6 am. The morning was chilly although as the sun rose the temperature became pleasant. The journey along the winding road became nicer when the pretty Bias with its dazzling turquoise blue water accompanying us. We reached Manali by 5 pm after a few stops for food, tea and a small traffic jam just before entering the town. We all were tired for the whole day bus journey. So, after having an early dinner, we retired to bed.

The morning was free and we dropped at Manali Mall to roam around. The day was cool and cloudy. The chill wind was blowing. The locals were saying that it was snowing at Rohtang top. We got some clicked at Mall and then headed to Mountaineering Institute.

Atal Bihari Vajpayee Institute of Mountaineering and Allied Sports is located a couple of kilometres away from Mall road. It has a small museum that displays a collection of models, mountaineering equipment belonging to famous mountaineers and other cultural belonging of hill folk.

When we got back to the Mall, the beautiful displays of fruits and vegetables in the market caught my eyes and I headed to explore it. The market was adorned with a wide variety of fresh fruits and vegetables like Kiwi, red apples, green apples, pomegranate, elongated giant cucumbers and many more and they were so cheap. There, I first saw a strange fruit, bright orange colour with the even stranger name 'Japani fruit'. While coming to Manali the day before, we saw some roadside trees laden with these fruits but we mistook it as apples. I bought some Japani fruits to taste. I was asked to peel off the outer skin and eat the inner pulp. It was tender and juicy. I can still remember that kiwi was sold in a pack of 10 to 12 for only 25 rupees whereas one piece kiwi costs 25 rupees then in Kolkata. I love this fruit. I ate so many kiwis that I have never had before and also brought back home. A new vegetable I noticed in the market and came to know that they were sweet bitter gourd. Although, it tasted quite different.

Post lunch we set out to visit temples of Manali.

It's a beautiful pagoda type temple located amidst deodar forest. The temple is dedicated to Goddess Hadimba who was the wife of the third Pandav Bhima.

It's one of the oldest temples of Manali and dedicated to Lord Shiva. This temple is famous for its incredible wooden carvings. 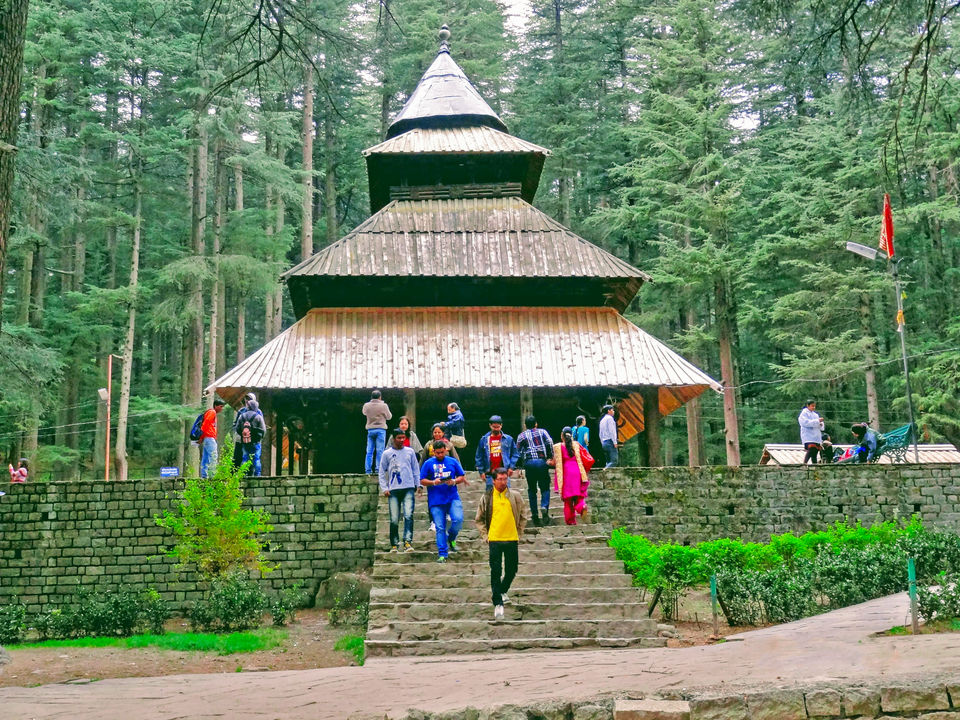 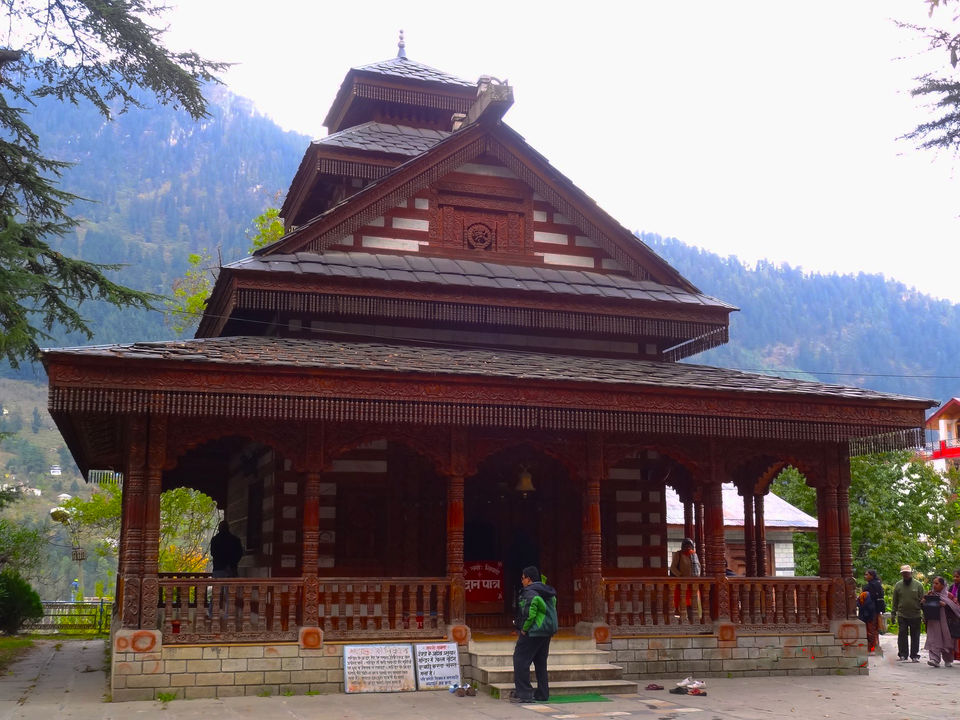 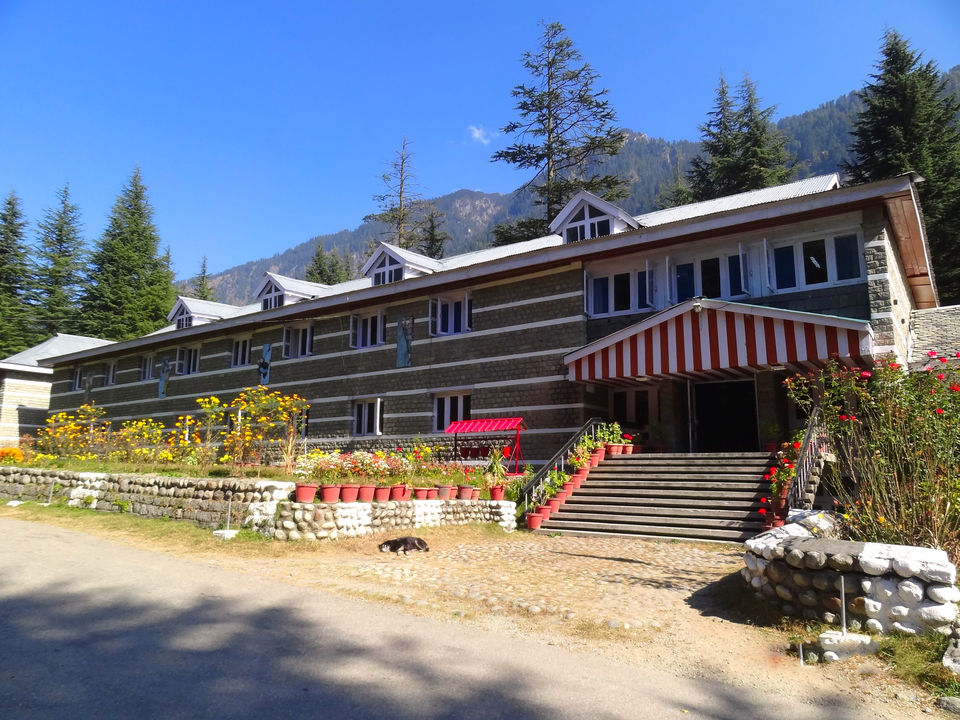 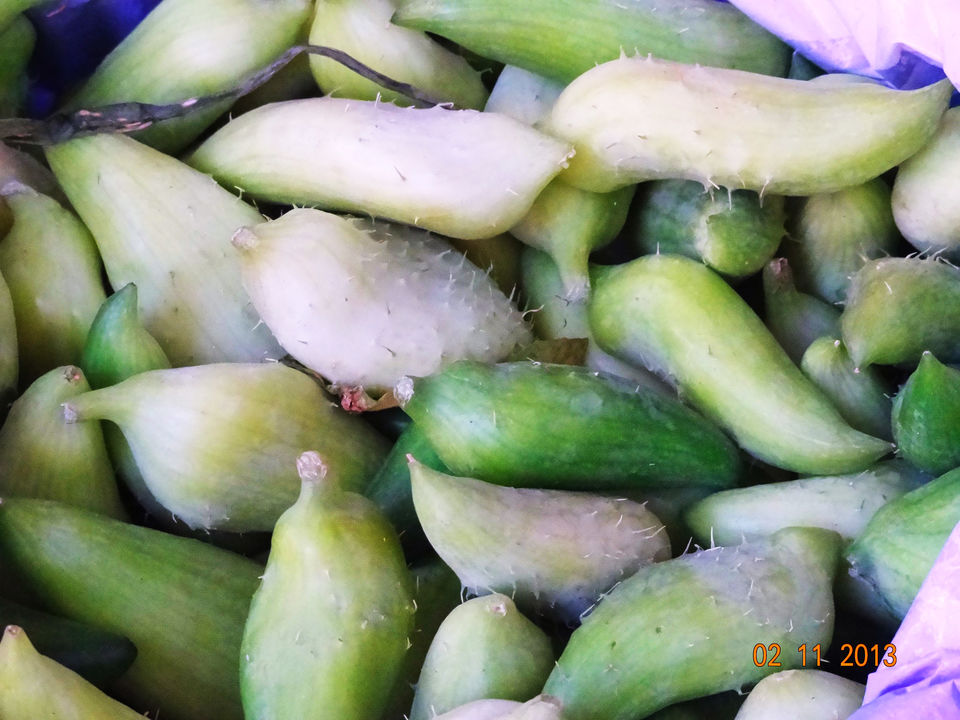 A trip to Manikaran

We started for Manikaran to visit the highly revered Manikaran Sahib Gurudwara and natural Hot Spring. On the way, you came across spectacular Kullu valley, the confluence of river Beas and Parvati, the beautiful Parvati valley, the narrow road going through the dense forest, sometimes half tunnel cut in a gorge beside the river Parvati was enchanting. You may take a pit stop at tiny town Kasol for enjoying the scenic beauty of the valley. If you are lucky enough, you may witness the herd of Himalayan goat or sheep on the way, but sometimes it causes severe traffic jam. It took more than three hours to reach there.

It's located on the bank of Parvati river and a walkway connects it with the main road. The place is serene and peaceful. We went directly to the main praying hall. It's worth visiting. Next, we headed to langar hall and had the delicious Rajma Chawal with Kaddi and lauki ki sabji. You can find many small temples around that are also worth visiting. 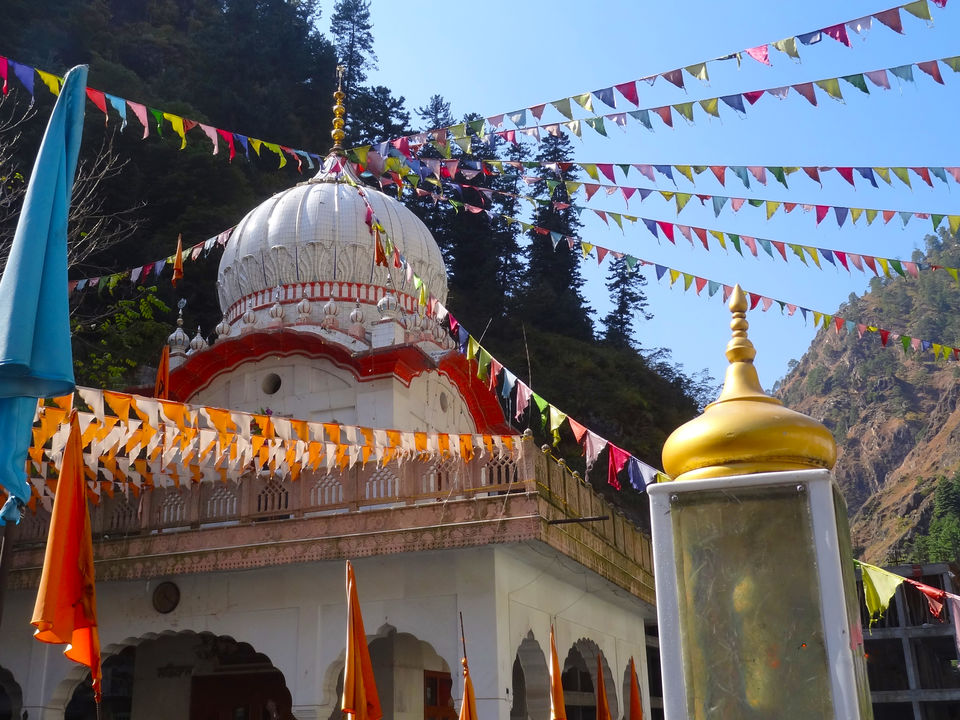 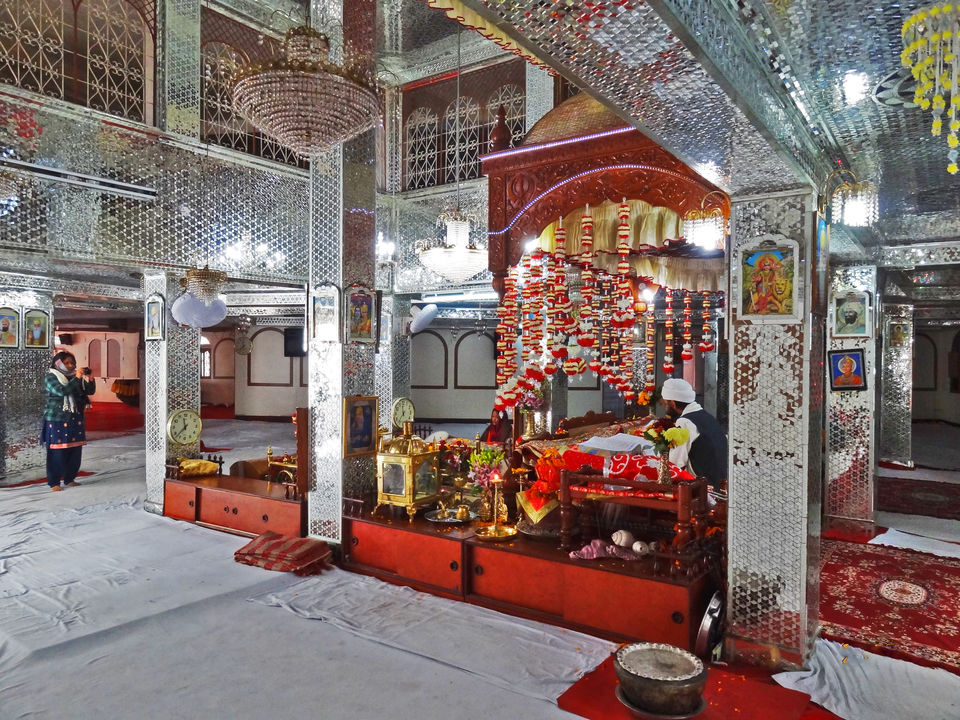 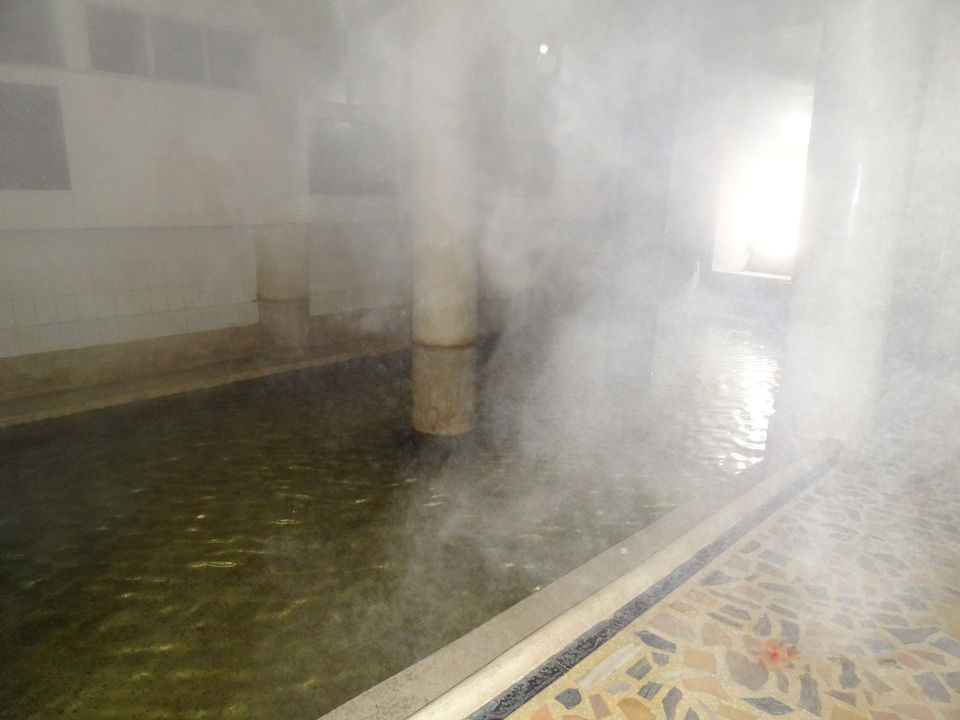 Flock of goat on the way to Manikaran 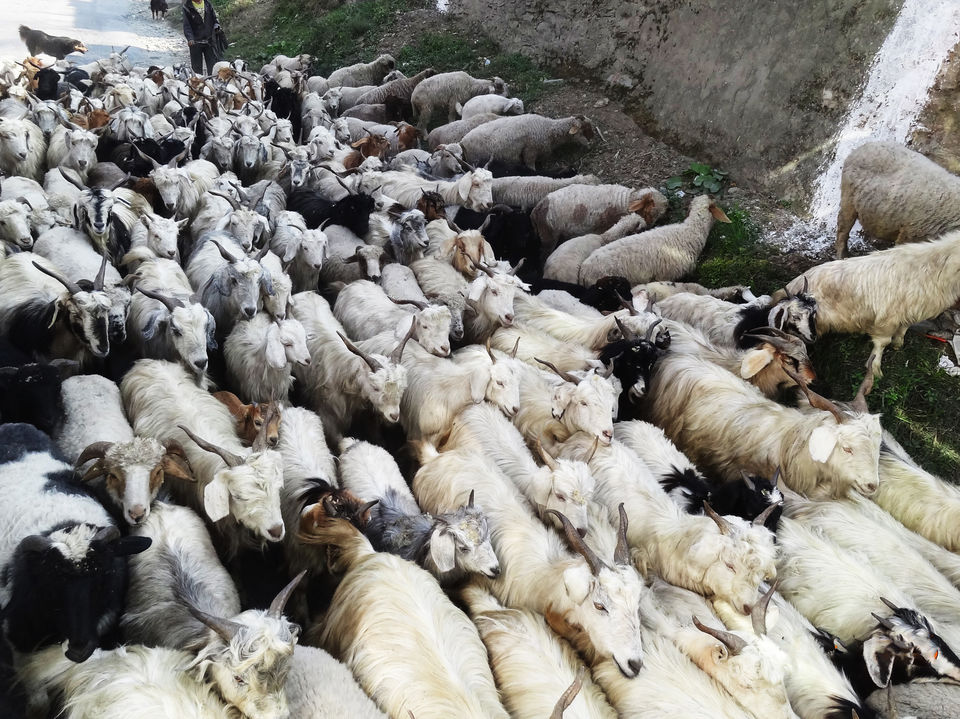 A trip to Rohtang Top

It was the last day of our trip. We started early to visit the Rohtang Pass as the morning was cloudy and the temperature was chill. As we already got to know that it was snowing at Rohtang, so we all were excited and in a hurry to reach the top. We stopped once at a roadside shop to rent some woollens to cope up with the biting cold at the top and continued the journey.

A couple of hours into the journey and we found ourselves in a fairyland. The trees on either side of the roads took the myriad colours of red, yellow, golden brown. It was looking spectacular. Later I got to know that deciduous trees during fall season take fall foliage by which every leaf of the trees takes the beautiful fall colours. That was the first time I witnessed the true beauty of fall colour in the Himalayas.

Soon we reached Rohtang Top. As I stepped out of the car, I found myself in the middle of the whitewash wonderland. The outside was freezing cold but the beauty was bewitchingly beautiful. The ground, slopes, peaks everything was covered with a blanket of milky white snow. Except for a few tourists and a herd of ponies, the top was almost empty. Not that this was the first time I was seeing the snow or snow-covered land but it was after a long gap of almost two years and it made me joyous. We were walking ahead along the snowy road while admiring the unspoiled beauty of mother nature.

And then, all of a sudden, small snowflakes started coming down from the sky. The snow was floating in the air just like a feather. I just couldn’t believe my eyes. It was so soft to touch. I was staring in awe. It seemed I was watching a scene straight out of the Movie. It kept coming down and rested on the outer surface of my long winter coat and soon melted into the water droplet. That was my first encounter with the snowfall. It was something so beautiful that I had never seen before and it was one of those magical moments that turned into a memory for a lifetime.

The fall was continuing, so I just put the umbrella on my head and strolling around. Suddenly I saw a few Quad Bike at a distance. And my roommate and I decided to take an adventurous ride.

The Quad Bike is a type of recreational three-seater vehicle that could be a ride on a snow-covered road. It is a total fun activity. It could be ride alone but we prefer to sit at the backseat. It was a 20 minutes trip. We headed towards the top while it was still snowing. The snowflakes hit the face and the glasses. Nothing could be seen properly. I had to remove the spectacles to look around. We were going through the fog. the visibility was as low as a couple of feet. It was an awesome experience. A few minutes into the journey, it started snowing heavily. The large flakes of snows started hitting the open surface of the face tremendously, so we headed back. Riding this bike along the snow-covered path through the snowfall was another lifetime experience. I think it was the best thing that I did on this trip.

If you are in Rohtang top during winter never miss this bike ride. It was a unique experience and quite thrilling too. Then we started getting down and reached the hotel before lunchtime. The evening was free, we took a stroll at the mall road again.

Fall colour on the way to Rohtang Top 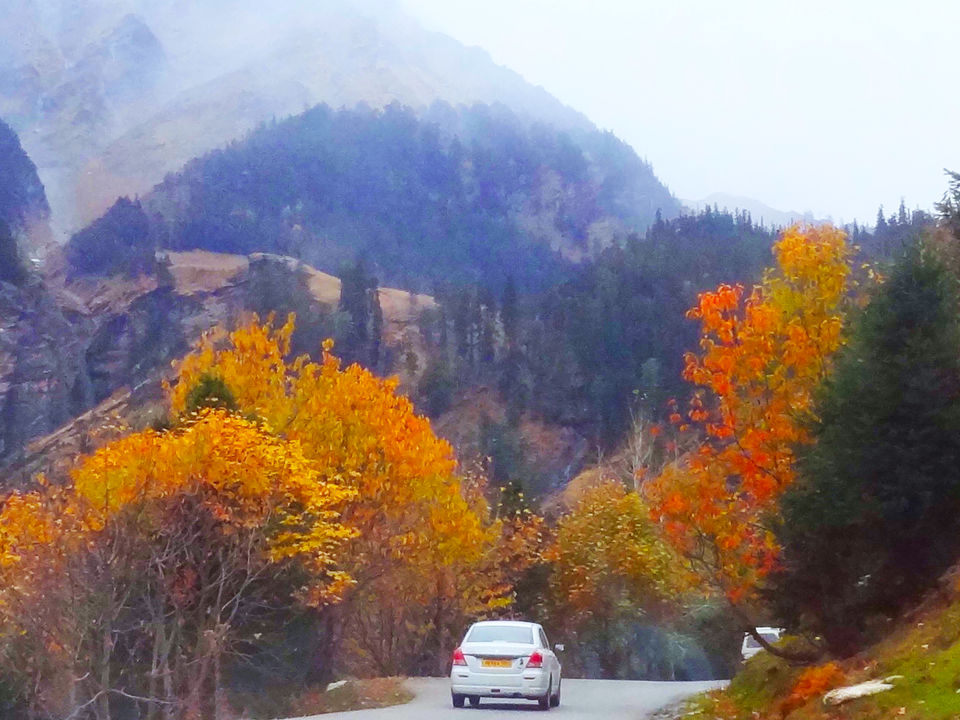 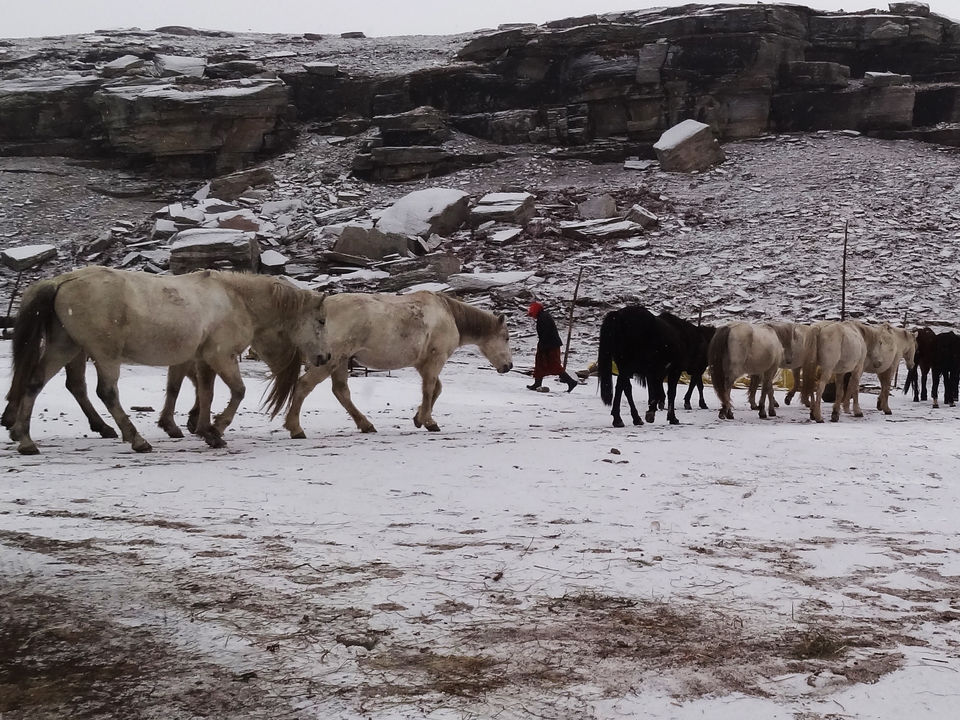 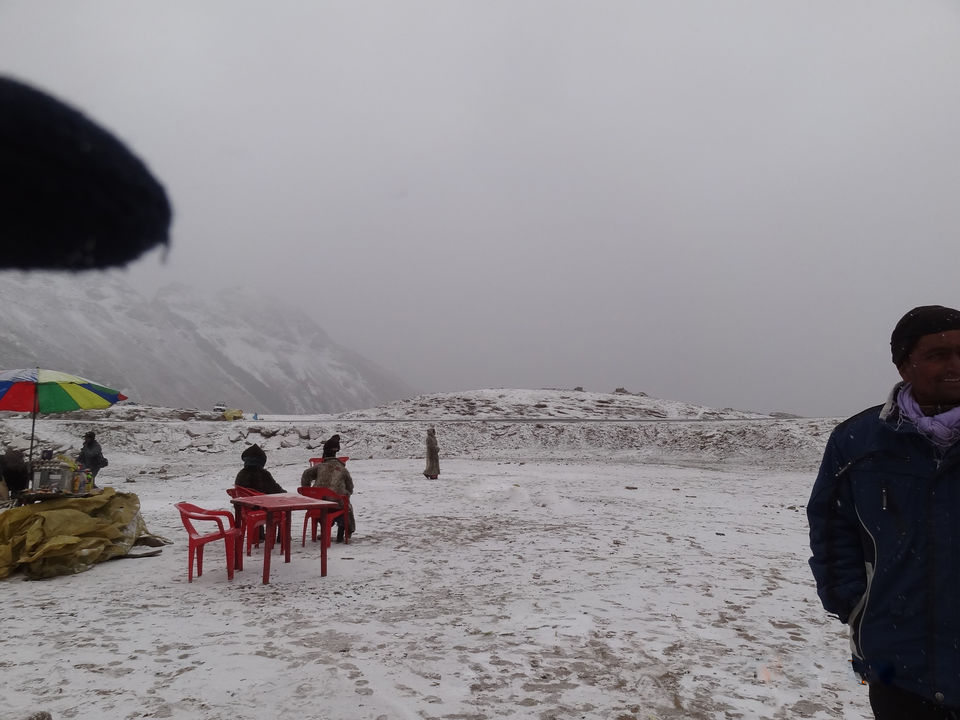 The next morning we started for Chandigarh railway station and boarded the train in the evening for Kolkata.

This trip was very special to me as I tried first time a Punjabi dish, experienced the fall foliage, got to know some new fruits and ate countless Kiwi(they were so tasty), rode Quad Bike on the snow-clad road and enjoy the snowfall, one of the most memorable moments to cherish for a lifetime.