One week in the mountains on a 5k budget. HRTC ordinary buses that break your back and test your spirit. On foot on the narrowest cliffs. Hitchhiking to the last village on India-Tibet border.

Cucumbers for breakfast, landslides for lunch.

And I have relished every single of these moments that I breathed the Himalayan air in. I knew what I was signing up for, and never did I regret my brave decision or fret over my well being. Here's my story!

As the news channels continued to forecast news of landslides, incessant rainfall and floods in the month of August, I cancelled my trip twice before I said, "hell yeah!! I gotta go!". And so I did in the third week of August, took a courageous decision of going to Kinnaur, despite the odds and that too by HRTC buses!

After a tiring journey of 15 hours from Delhi to Rampur in a noisy bus, I brushed my teeth by a hand pump, had some cucumbers at the bus stand and hurriedly boarded the bus to Reckong Peo. Thus, started my long love affair with HRTC, filled with adventure, trust, admiration and tiny hiccups along the way.

Buses for Reckong Peo are available every half an hour from Rampur. I was accompanied by locals, some equally maverick travellers and loud Bollywood music from the 90's.

I reached Reckong Peo at around 11 am, had an amazing bowl of soup from the market, and boarded another bus for Samdho, that leaves from Peo at 12:30 pm. This bus dropped me at Nako, a tiny village in the cold desert of Hangrang Valley. Hosted by a loving old couple, my experience here was unparalleled, from attending a Buddhist wedding to walking on a cold, dark and deserted road on a moonlit night. The people, food, view and the hospitality here in Nako is something that I have never experienced before. So I'll save it for later. 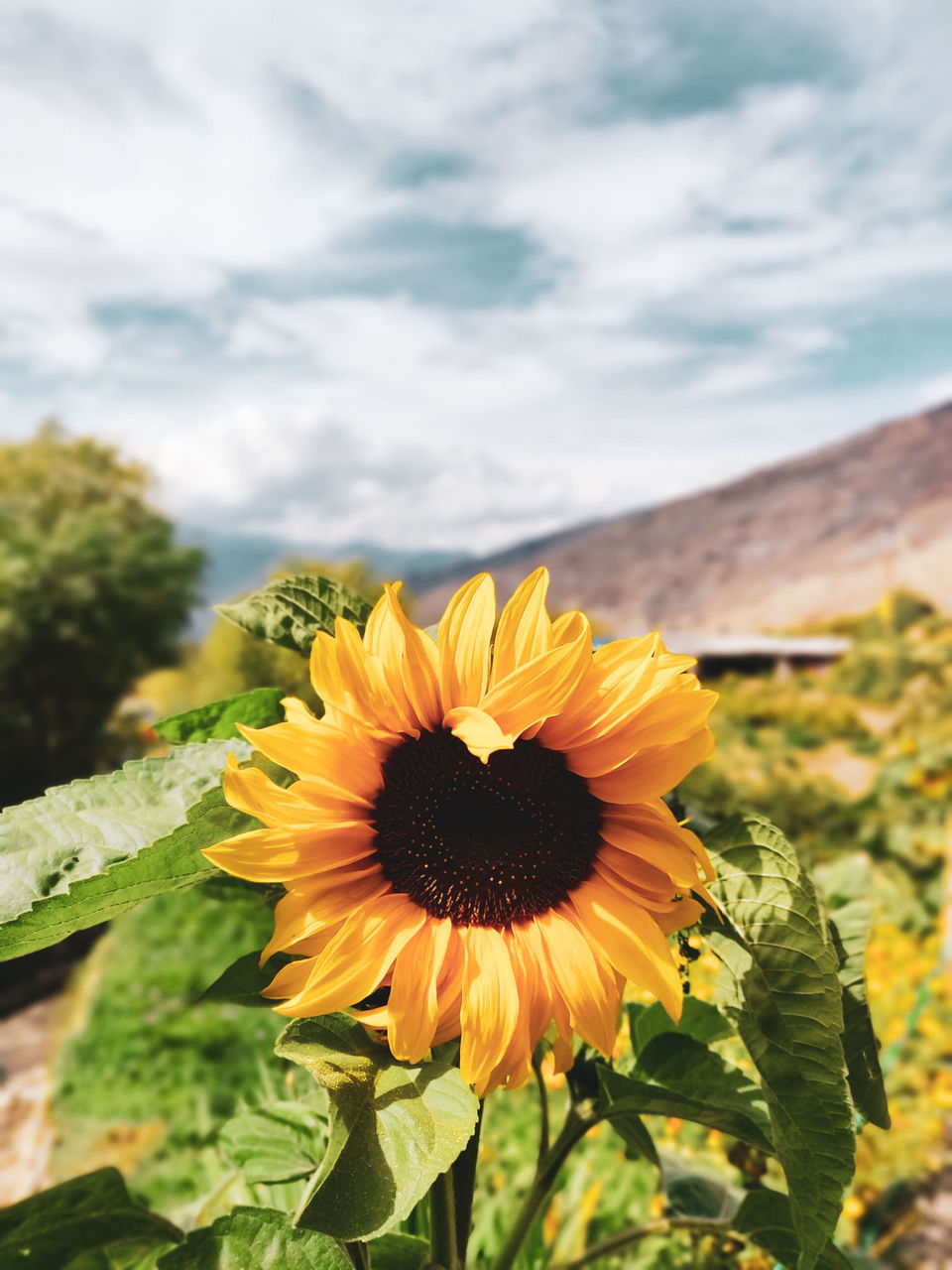 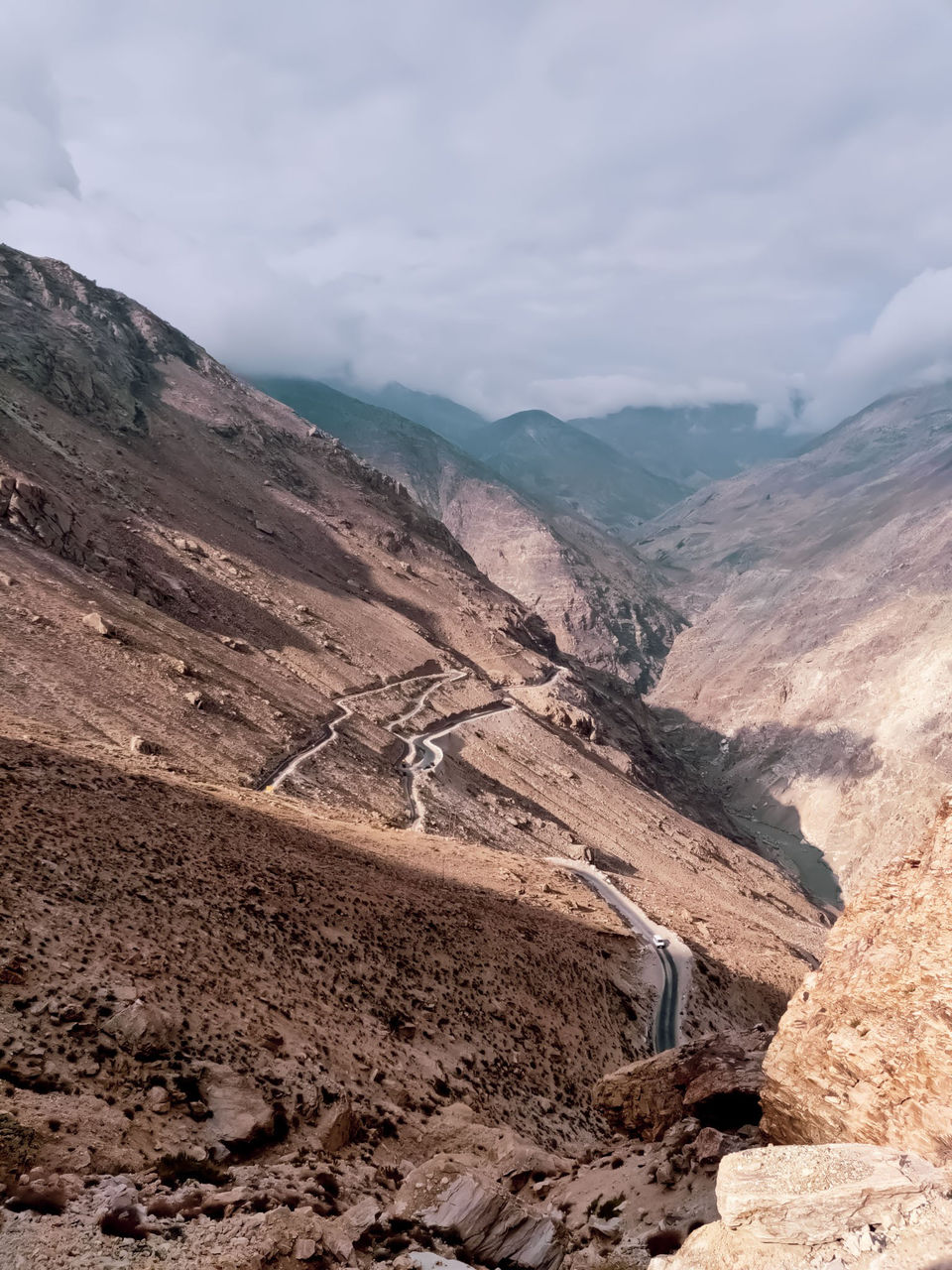 Chitkul is a tiny slice of paradise tucked away in the glorious Himalayas near the Indo-Tibetan border, this is the farthest you can travel to without a permit. I spent a night and the next day there, capturing domesticated sheep and young kids who were so excited to pose for my camera. I spent the day walking with my rucksack on my back, for stretches in the green valley, breathing in the crisp Himalayan air and not feeling a tiny bit of a pain. For stay options in Chitkul, click here. 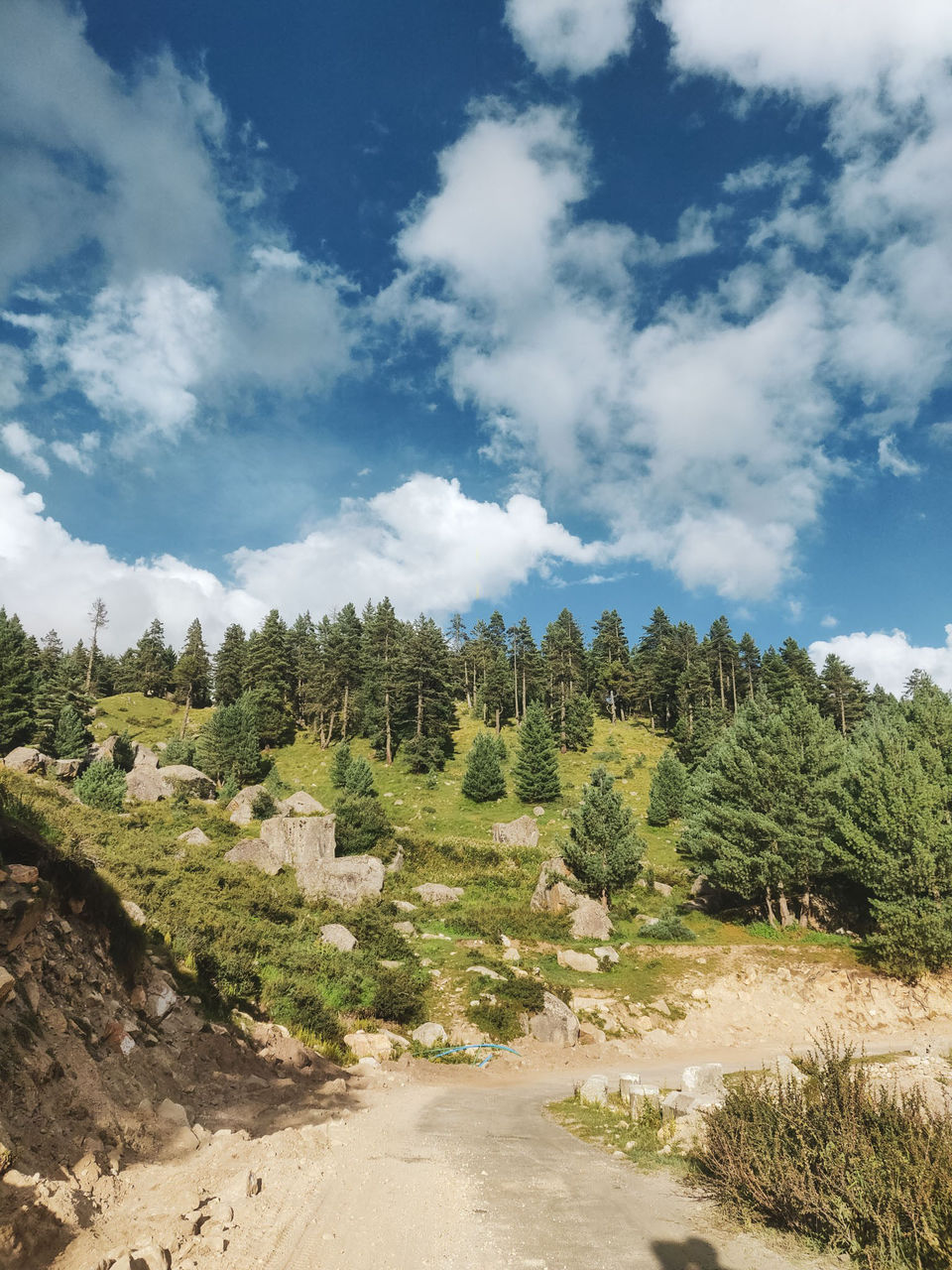 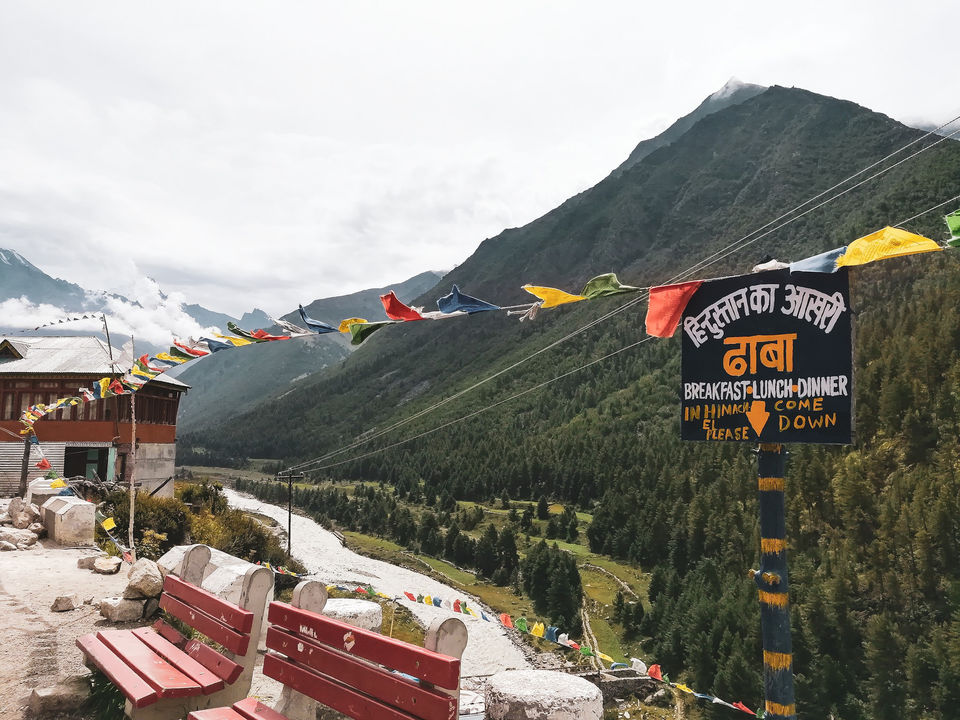 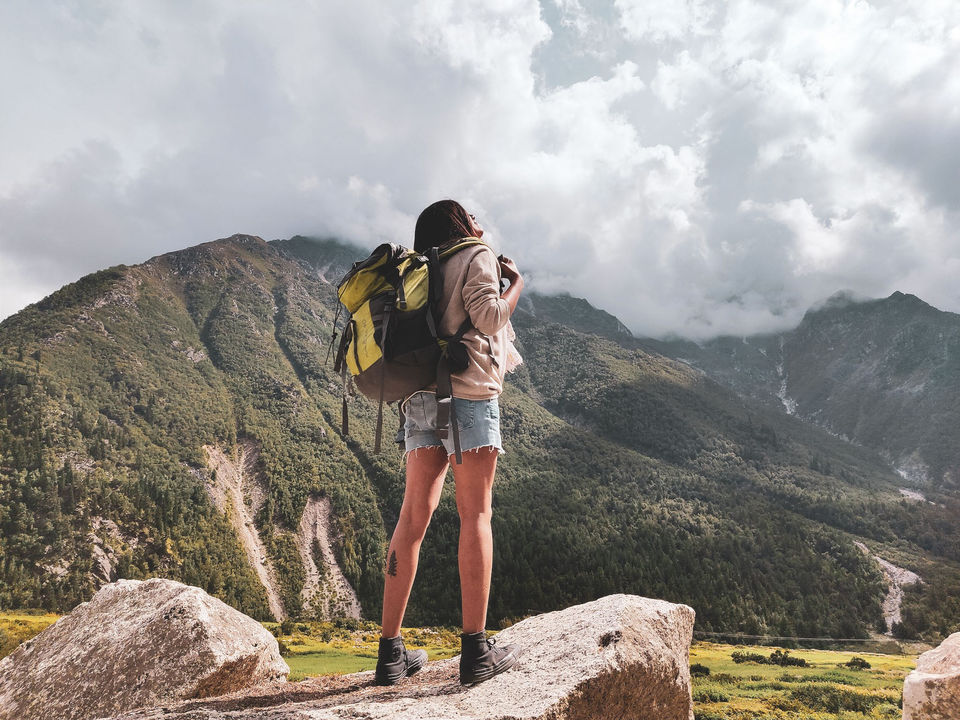 Kalpa is a beautiful little village at a mere distance of 7km from Peo. The erstwhile headquarters of Kinnaur district, Kalpa is frequented by travellers to witness the mighty Kinnaur Kailash range. I spent my evening looking out the window of a tiny dhaba, and savouring authentic thukpas and momos.

My sole purpose of visiting Kalpa was to go 8km farther from there next morning, and stand at the infamous Suicide Point in Roghi. But here's a public transport hiccup, there are only two HRTC buses plying to Roghi via Kalpa, one at 8 am another at 9:30 am. I missed the first one by a minute, and had to wait for the next bus, feeding on apples, while the ferocious Kinnaur Kailash stared back at me. For stay options in Kalpa, click here.

In front of the mighty Kinnaur Kailash peak. 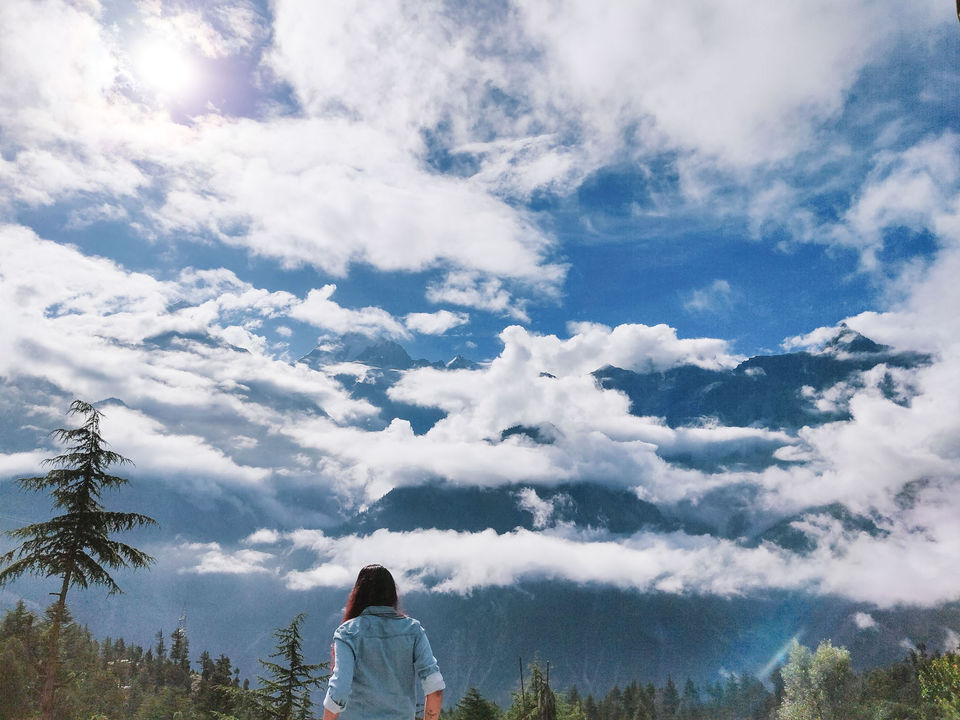 This 9:30 am bus is also the last bus from Roghi to Reckong Peo until 6 in the evening, so I had only ten minutes to spare at the Suicide Point, where I met a driver from Shimla who told me about tourists failing to anticipate the perils of this cliff, and ultimately losing their lives. The stories he narrated were bone-chilling, yet there was something about the place so liberating and unbinding, that without an inch of fear I too decided to stand on the edge. There at the edge of the cliff, it somehow seems that if you were to jump from it, you'd indeed fly, soar high in the sky, like an eagle I saw scuttling across the silent mountains of Roghi.

I left for the last village of India, Chitkul, after basking in the sun for two days in Nako. Now when travelling by public transport, it is imperative to know that buses are punctual, but not frequent and for various reasons they might not show up at all sometimes.

I therefore, woke up really early and caught the earliest bus from Samdho to Peo at 7:30 am, got down 10 mins ahead of Peo, and caught another bus that was going to Chandigarh from Peo, via Karchham. Karchham is the point where the road bifurcates into two one goes to Sangla Valley, and another to Reckong Peo. From Karchham I boarded another bus to Sangla.

Taken at Spello, on our way to Nako from Peo 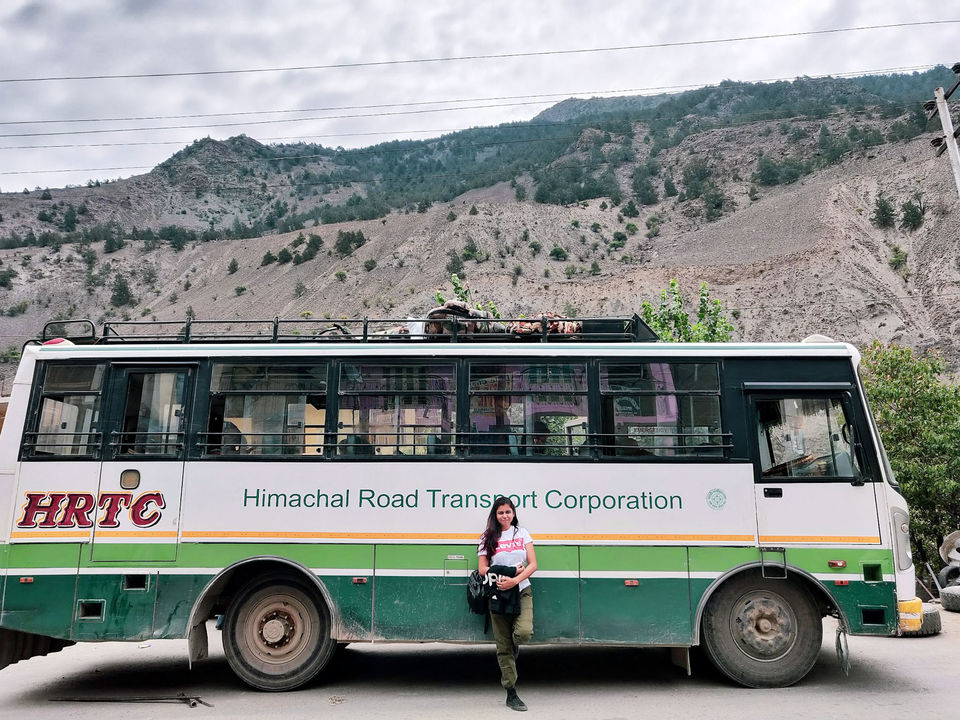 People walking on foot beyond the block point. 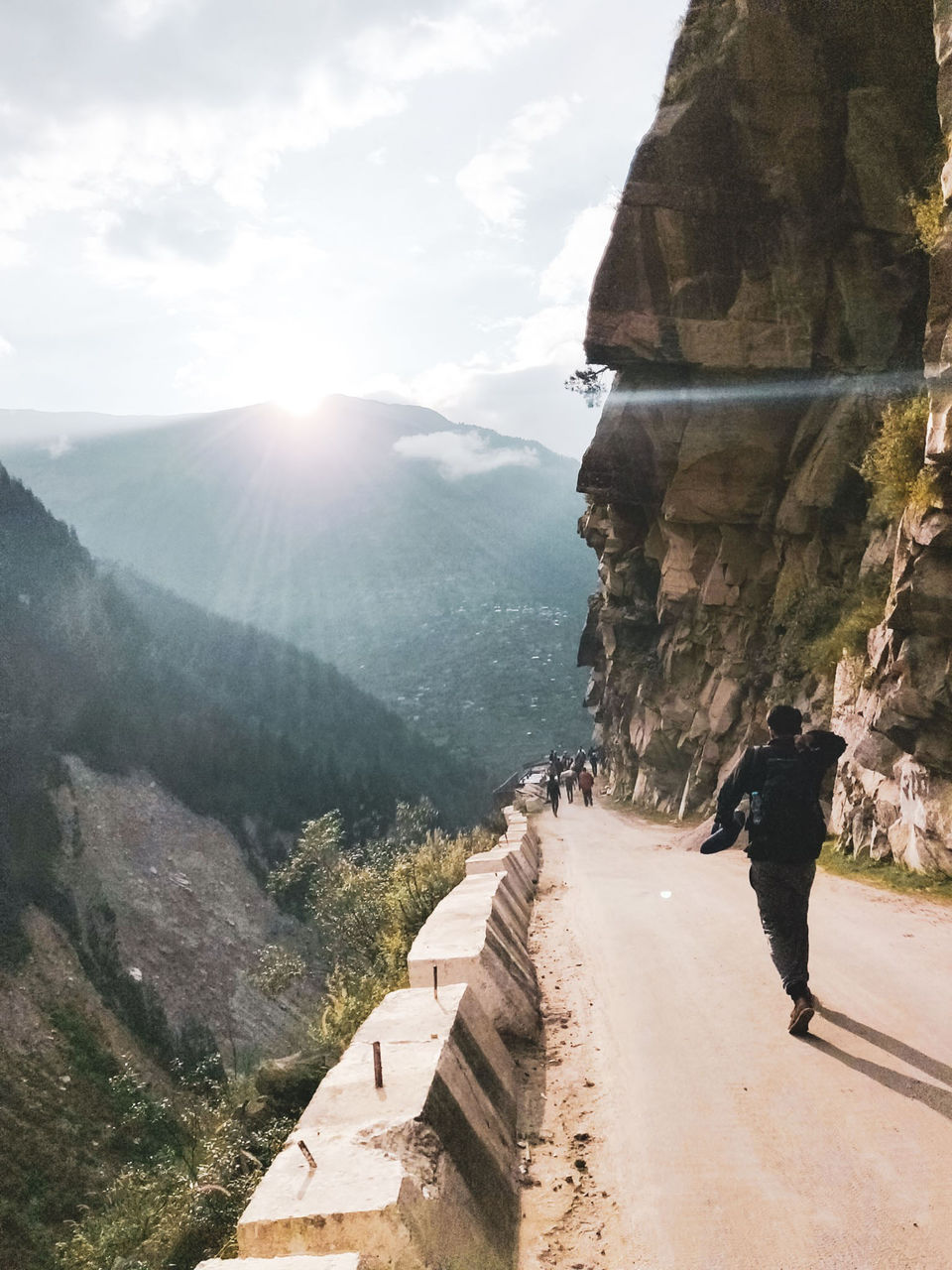 Another public transport hiccup – a landslide had occurred 12 days ago, due to which there was a huge block on the road to Sangla, beyond which only smaller vehicles could go. We were stranded there at a cliff, with no vehicle, not even a human in sight. We walked for a long stretch until one local car decided to stop for us.

Now that there were no buses plying beyond Sangla, there was no bus available from Sangla to Chitkul either. A gentleman in Sangla helped us out by getting me a seat in a pick up truck to Chitkul.

My return was not easy either, I left from Chitkul on foot, caught a bus near Mastrang to the same block point in Sangla. Our plan was to reach Rampur the same night around 11pm, but that did not happen, as there was yet another road-block near Jeori (23km away from Rampur Bushahr).

It rained cats and dogs that night, I somehow managed to find a resting place and some food in Jeori. And then there was an endless switching of buses from Jeori to Rampur to Shimla to Chandigarh at 1 in the night, before we finally reached New Delhi at the wee hours of a dull Monday morning.

My stay in all of these beautiful places cost me about ₹200 to ₹300 per night. The food cost me somewhere between ₹50 to ₹100 per meal. 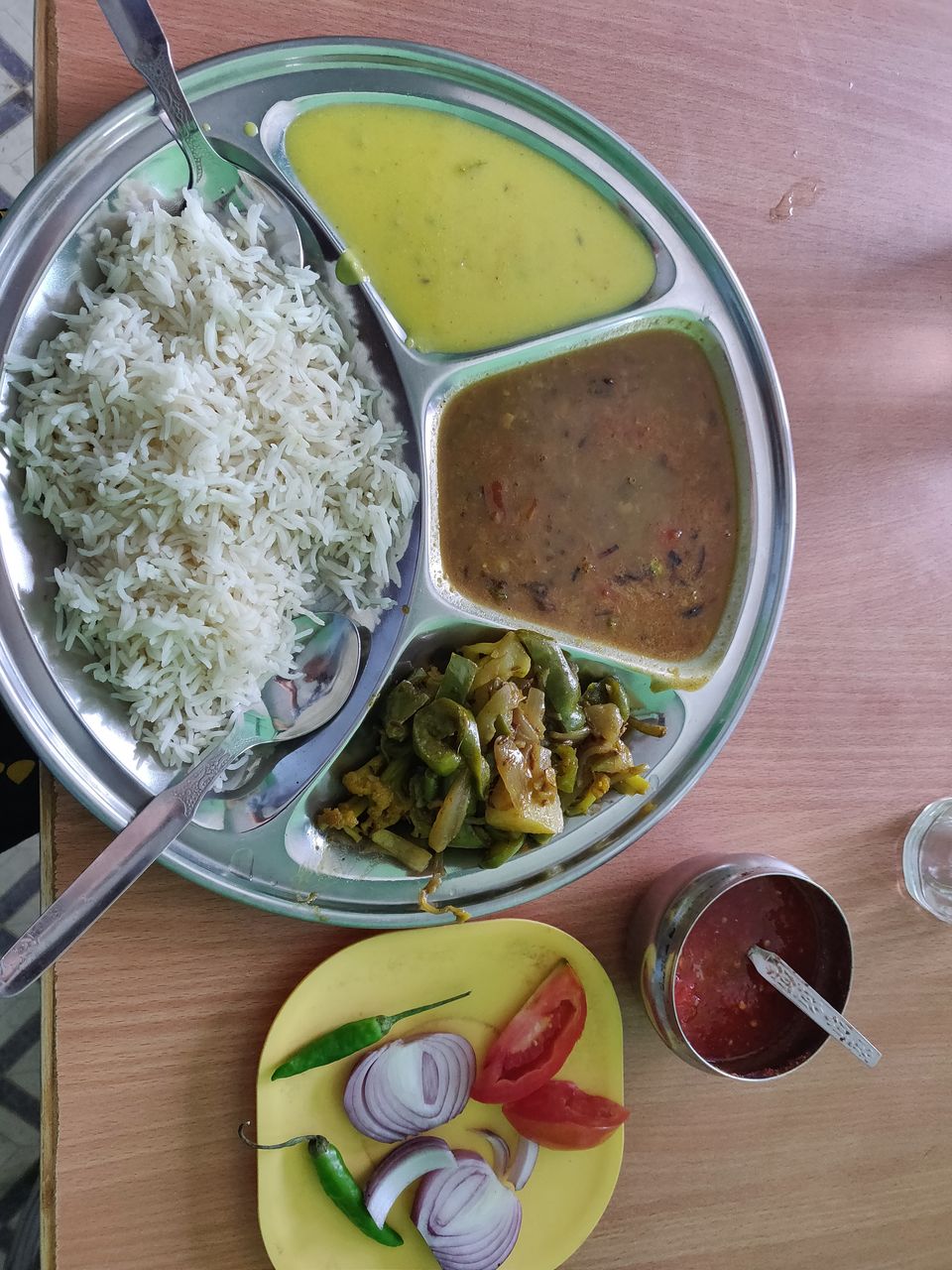 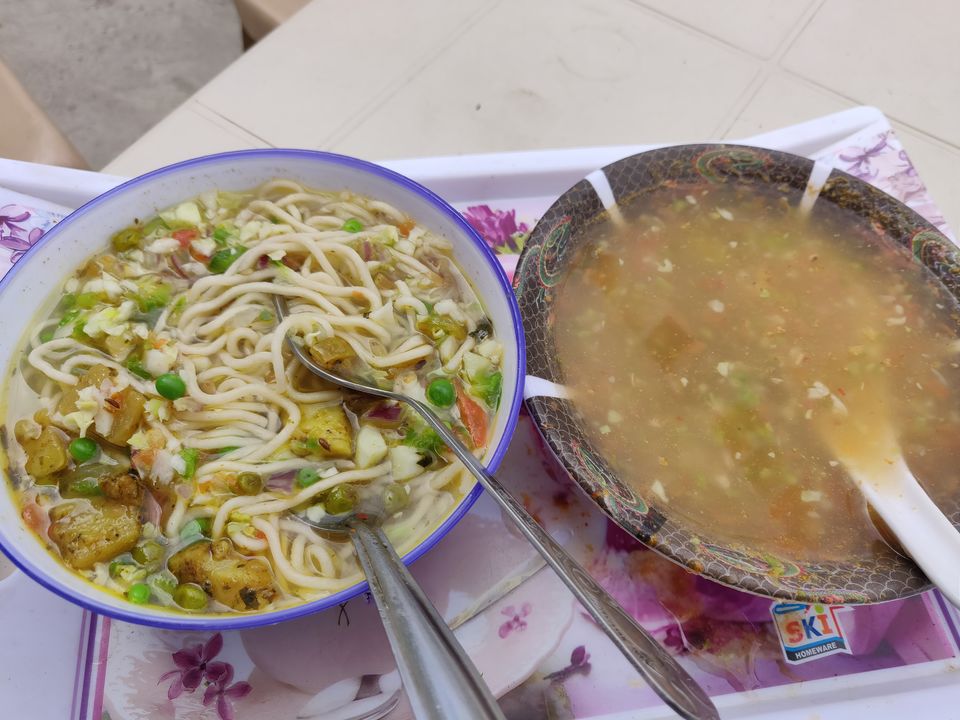 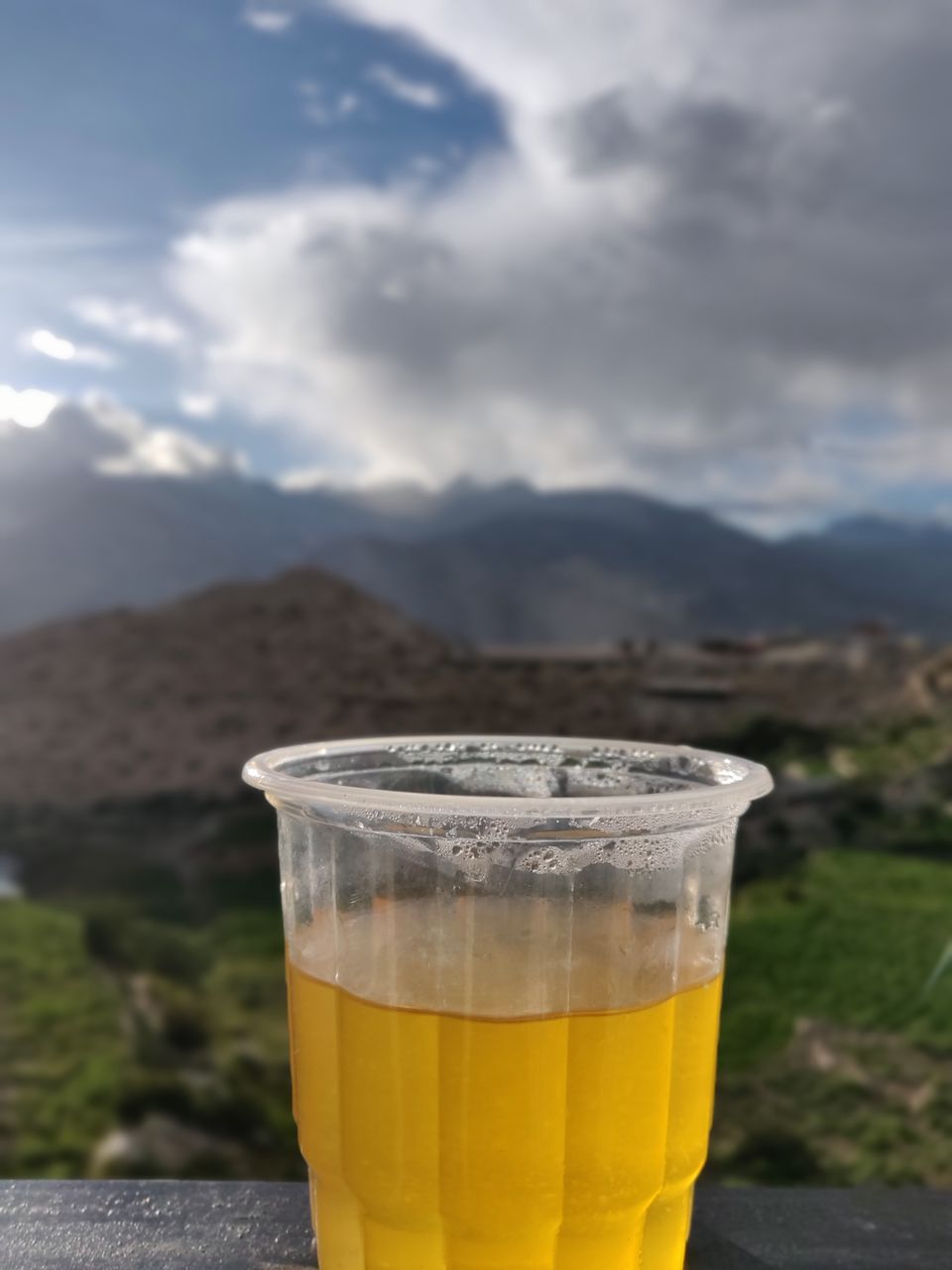 Important to note: There is only BSNL connectivity in Nako and Chitkul. All networks work fine in Reckong Peo.

One needs to be alert, agile and extremely adaptable to be able to travel in this season, especially by the commendable HRTC buses. Keep your eyes and ears open at all times, take notes and most importantly talk to the locals.

Residence of the king of Rampur Bushahr 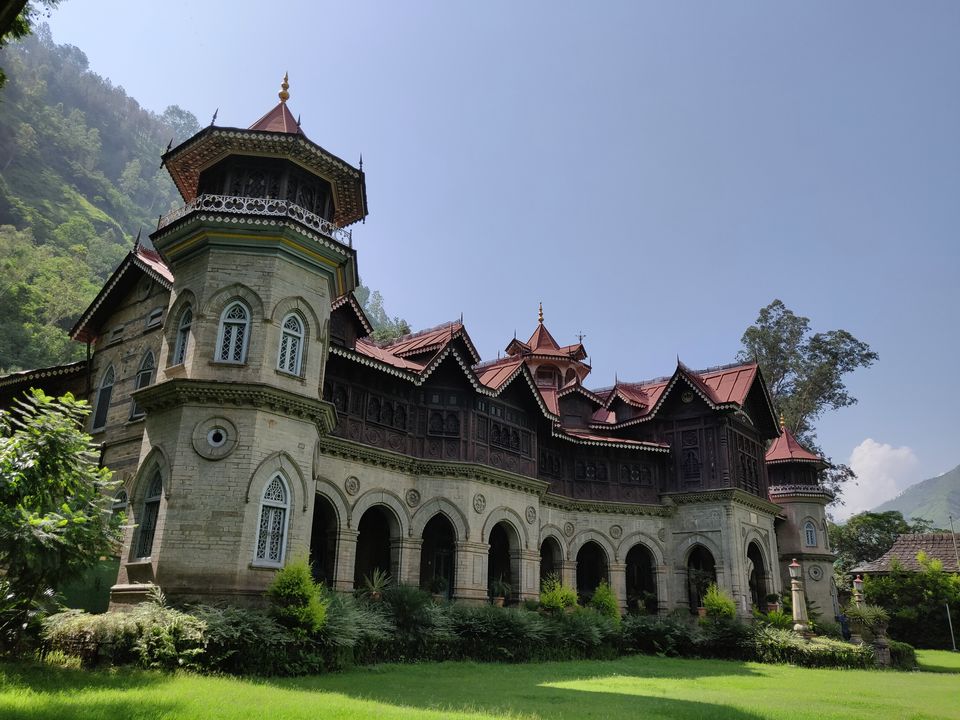 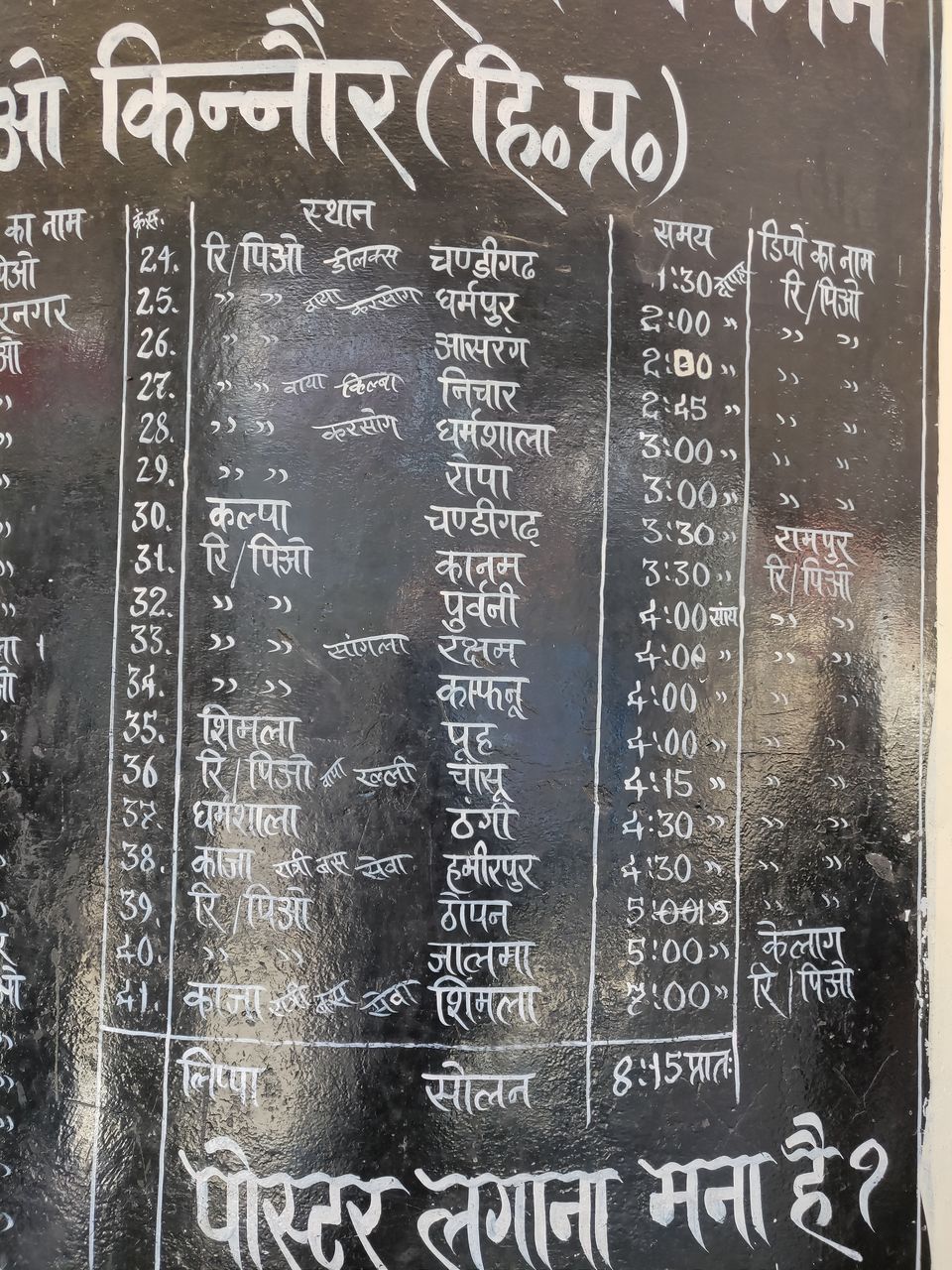 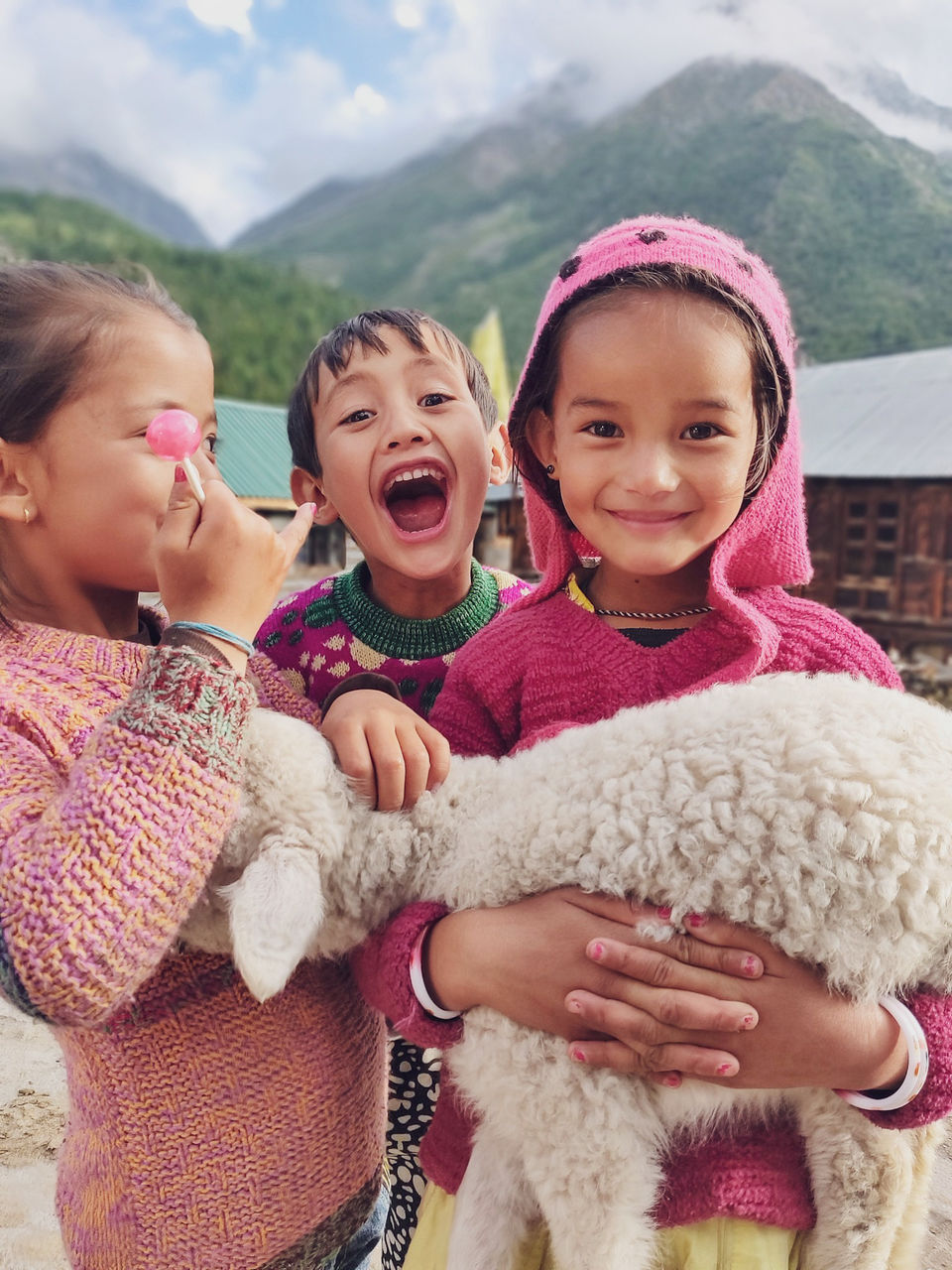 This one journey has been full of adventures and challenges, there were heavy rains in Jeori, sometimes no food for hours, no transport for miles. I fell sick, I got starved and I got tired. But there is something about travelling to these mountains, their might is contagious. Even in the scariest and the most dead end of a situation, I was not scared, and I did not stop. I was so transfixed by the beauty of the place that not for a moment did I think of returning home, even when the journey ahead seemed dangerous and more of a blur to say the least.

Do you have a travel story of our own? Share it with us here.

Check out the coolest travel videos on our YouTube Channel.

All images are owned by the author.