A Luxurious Take On Wildlife 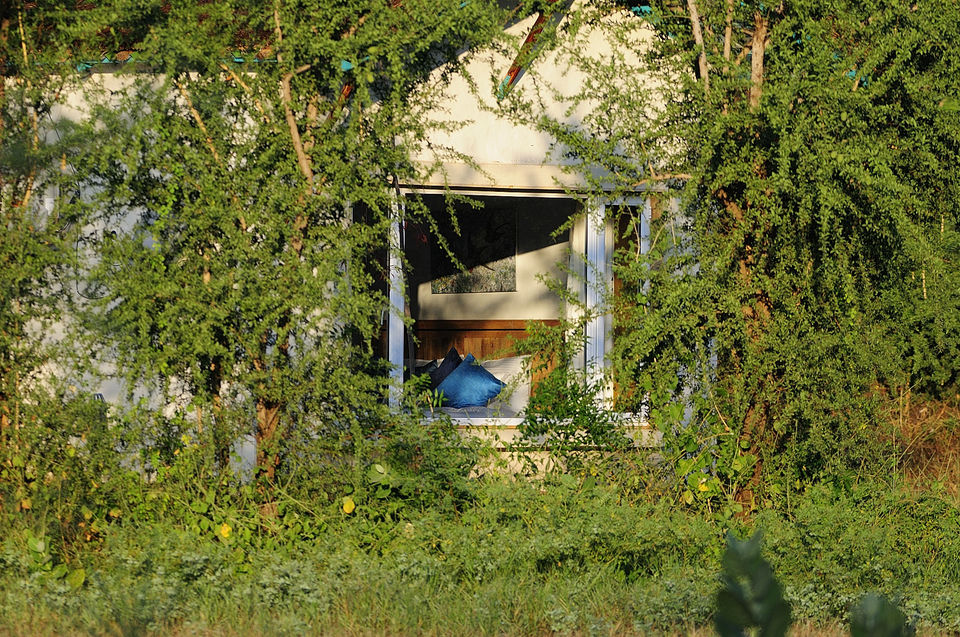 When they meant we combine wildlife with luxury, they weren’t kidding.

My friends and I needed a break from our everyday corporate lives so we decided to take a little vacation. The issue was that all of us worked in different cities: Delhi, Agra, and Jaipur so finding a convenient vacation spot was a bit tricky. But after a bit research, we came across this boutique resort called Trees & Tigers that solved all our problems. The resort was placed in Sariska, which was about 2.5-hour drive from each of our locations. We booked our stay during the week so that we could get the twin cottages for a cheaper price.

Yes, you heard right, we booked cottages and not hotel rooms. The resort didn’t believe in hotel rooms, they thought it limited the luxury that one could benefit from when they were so close to nature. So, they allowed lush green freshness and the grandeur of luxury enhance your every being by providing you with cottages with personal courtyards and private machhans. But that wasn’t the best part yet. The twin cottages that we booked had a private pool placed right in the center.

A pool in the middle of wildlife? Yes, please. As if the serene surroundings weren’t enough.

After lunch, we went to the Siliserh Lake to do some sightseeing and boating. There was a regal palace built by a Maharaja on the edge of the lake that casted its shadow onto the water. It was a perfect backdrop to get tons of Instagram worthy pictures. So, we hopped onto our boats, took out our phones and paddled all the way around till sunset. The lake was enormous and had a chill in the air surrounding it which made it a very pleasant spot to visit in the summer. We were lucky to catch the sun set over the Aravalli hill before we made our way back to the resort. 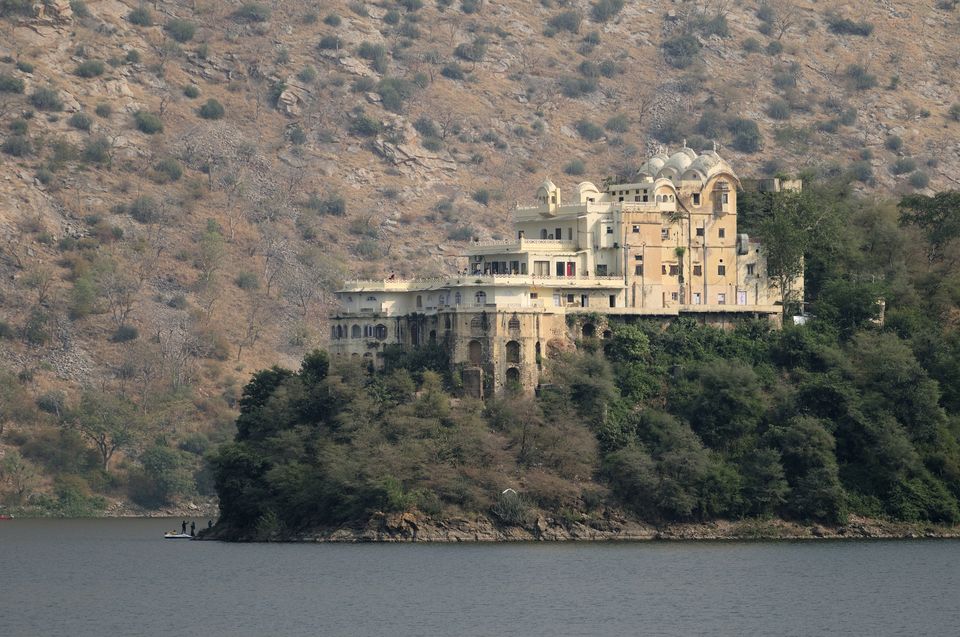 The next morning all of us woke up early, bubbling with energy to set onto our jungle safari. The driver and the guide sat in front taking us throughout the jungle and stopping at various points to explain us the prominent animals. So far we had seen a caracal, a jackal, some crocodiles, chitals, and birds but the biggest attraction, the tigers were still missing. They had explained us at the beginning that due to the reserves gigantic size only the lucky ones get to spot the tigers. Naturally, after hearing this our optimism levels of sighting the beast had dropped low but it all changed with a sudden stop. The driver had put the gear in reverse and the guide had his eyes stuck on the ground; they had just spotted fresh pug-marks. Both the guide and the driver exchanged a look that only they understood and we were soon fleeing through the forest away from the tracks made on the ground. After a mile of bumps and twigs in our hair, the jeep stopped with a jerk. All of us peeked out to see why we weren’t moving and there it was. A male tiger calmly lying down and looking at us. Soon other jeeps started lining up to get in on the view and once there were many the tiger got up to move to a more secure location. And as the tiger left his spot we left ours. 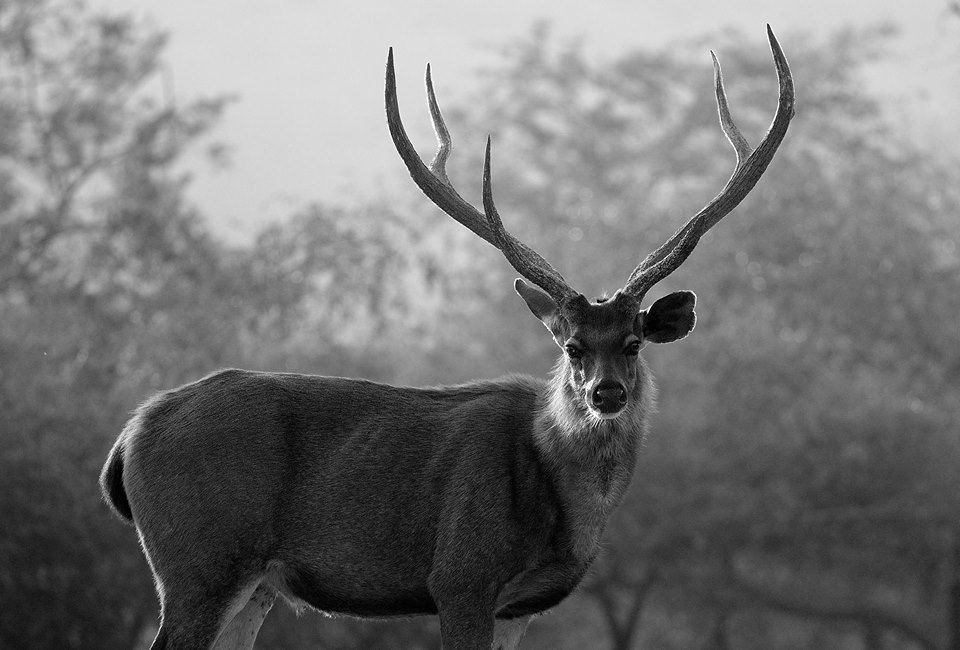 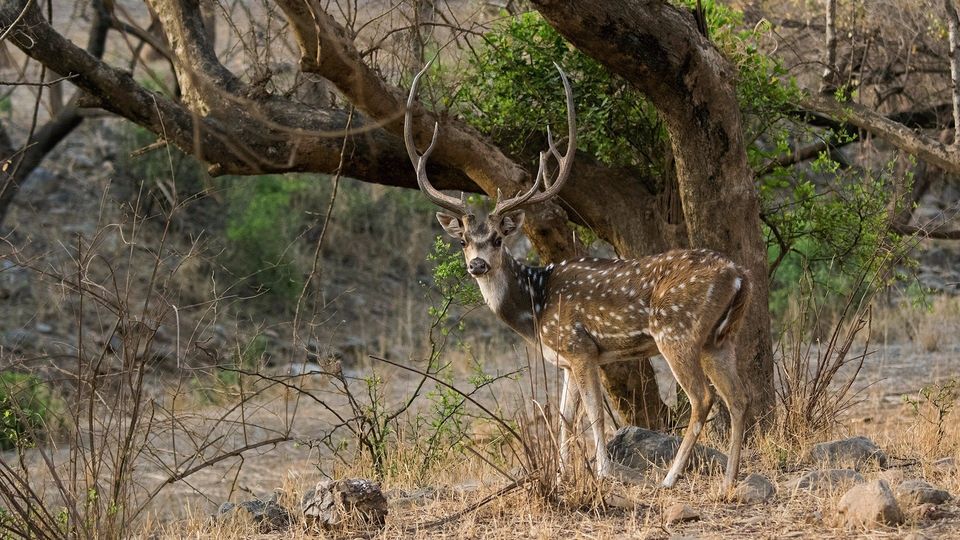 The next stop was to visit the ancient Pandupol temple that was situated right in the forest. Our guide took us to the temple and told us the mythological history of Hanuman destroying Bhima’s (Pandava brother) pride at that very point. He also told us that Pandupol was accessible to all due to the reserve being inhabited by local tribes as well. Tribes that lived in the reserve and had had one-on-one encounters with many species of the forest. I had never heard of a temple with such a thrilling background. Nonetheless, once we had said our prayers we hopped back into the jeep to retire to the resort.

The safari was tiring and all of us were covered in dirt. We had toured Sariska’s most priced gem, the sanctuary, and now it was time to immerse ourselves into luxury. So, we washed up and decided to have our own little soirée by our private pool. The night was calm, quiet and lit by a sky full of stars making our trip have its own fairytale ending.

A magical bar cart had appeared in front of the huge tree in the courtyard. There were lanterns hanging from the tree branches making the tree and the cart glow in the center. Each of us took a look at the menu and decided to order 6 different drinks and see which one would rank the best. As we sipped on to each other’s drink we realized each was different from the other and honestly there was no way we could rank them. We were on the second round of our cocktails, the free round I might add, when suddenly numerous people started pouring in.

The clock had struck 8 and we thought that it was dinner rush but there was something strange. Each came up to the bar to get a drink and then took their place around the bonfire. Nobody knew what was happening, all people could say was that a special night was planned. Soon enough the manager came and stood on the stony deck to make an announcement. He thanked everyone for their presence, told them that drinks and food would arrive at your seat as you order and asked everyone to not leave their seats until the end of the performance. He pointed to his right to welcome the surprise for the night and there it was.

It was a Kalbelia troop; Kalbelia is known to be Rajasthan’s most sensuous dance form.

The troop took their places on the deck and the dancers took their place around the pit of the bonfire that was now filled up. Within moments the entire courtyard was filled with sounds of heritage musical instruments. The dancers were adorned with bright clothing and they used vicious props likes nails and swords to dance upon. Their moves and turns were astonishing and with each flick of the waist the eyes of several guests would light up. Food and drink flew by as the dancers changed and the music beats increased. And simultaneously with the beats, the applauses increased as well. Everyone was so captivated that nobody realized when one dancer left the stage and came back with two guests to dance with them. Soon the entire floor was filled with dancers and guests alike doing Kalbelia all over. Needless to say, we joined in as well.

But that's just the outside of the cottage, let me tell you what they had on the inside. A huge bed placed right in the center; opposite it a 50” flat screen TV and a work desk; two windows: one looking out at the Aravalli hills and the other giving you a view of the resort; and finally a door that led you inside a perfectly crafted wooden walk-in wardrobe.

The wardrobe had a floor length mirror, a wooden bench, and enough room to play dress up in. But what caught my attention was the details with which the room was made. There was a wooden log hanging from the top where one could fixate their hangers. A huge window inside the wardrobe through which you had a clear view of your courtyard. And a gateway to the bathroom.

Once I examined the room I turned to the attendant to ask him why was there a window in the dressing room and his answer amazed me. He said, “Many here don’t wake up to the sound of alarm clocks, they wake up to the sound of bird calls. And many of those bird calls are from peacocks that land onto these courtyards and display their feathers to dance early in the morning. It is a sight that one would not like to miss and so there are windows placed both in the dressing room and the bathroom that look into the courtyard.”

Peacocks that land on your door every day? You definitely don’t get that in the city.

After examining the room that kept the wildlife theme intact while providing all modern comforts, we went onto exploring the property. The manager took us to a courtyard that had stone paneling on the floor, a leafy green tree in the center and a deck made of tiny gravel stones. Each element was placed precisely so that the courtyard could have both sunlight and shade at the same time. Low long wooden beach chairs were placed on the gravel stones for guests to sunbathe in and Muddhas (Indian Chairs) were placed under the tree for those who wanted to relax in a calm cool setting. There were also a couple of stairs were placed on the side of the courtyard that led down to a ground where the resort would host bonfires.

For families with different interests and age groups traveling together, this place was a gem. On the left of the courtyard, there was an activity room with table tennis, carom, and all sorts of little games. On the right, there was the dining room which gave you a modernish-rustic vibe with its high ceiling and leather furniture. And on the far left corner, almost hidden under the leafy tree was a bar that was crafted like a cave and had seats on wheels.

Imagine rolling on your chairs when you're tipsy.

As we stepped inside the bar the bartender gave us a warm welcoming smile and informed us about happy hour. From 6-8:30 no matter what drink you bought the second would be free. A persuasion good enough for two of my friends to tell the bartender at 2 pm that he would see us at the bar at sharp 6 pm. We left the bar and the manager took us over a bridge built on a pond that connected the reception to where the cottages were placed. The pond had different kinds of flowers in it and the bridge had tiny bird nests built at several places in the ceiling. It was like walking through a live forest. At the end of the bridge were several gravel engraved paths leading to different cottages.

The cottages were numbered and wooden signs were placed to point at each’s location. We turned left and came face to face with another pool. This was one was bigger than the one in our cottage and could be used by all guests. We stopped there to hear the manager explain as to how the pool ran all year round and a swim in the night was what many guests looked forward to. One of us cross-questioned him about the night swim and he answered. “The night is when nature comes alive. You hear birds, mammals, and all different kinds of species talk in their own tone. It is so peaceful that one loses track of time. An ideal way to forget about your worries.”