A Slice of Happiness - Samdrup Jongkhar

Well, before I begin with my experience, let me share a bit about myself and my journey. I work for an Indian telecommunications major out of Mumbai. Along with five other newly joined trainees, my training was scheduled in Guwahati for a brief period of a month. As the six of us had never been in the North Eastern India before we tried to make the most of our brief journey by exploring the places in and around Guwahati. Having come so far, we wanted to experience a bit of the culture of our neighbors. And what better place to start than the land of happiness - Bhutan! We were initially disheartened to find out that entry to Bhutan required travel documents for Indians - either the Passport or the Voter ID card (and half the group didn't bring theirs along). A bit of interaction with the colleagues made us aware about the the tiny old border town of Samdrup Jongkhar was one place Indians could visit without travel documents. Our colleagues also helped us in making travel arrangements - we booked an Innova at a very reasonable rate.

We woke up at 4 am and aimed to leave the guest house by quarter past five. Expecting to be greeted by a pitch-dark sky, we were pleasantly surprised to be welcomed by a bright morning. At 4 am. Despite all our efforts to leave early we ended up leaving only a little before six. We passed by IIT Guwahati en route to the tiny town of Rangia. The trip was just perfect for us – Samdrup Jongkhar is only about 110km away from Guwahati, and we estimated to cover the distance in a little less than two hours. 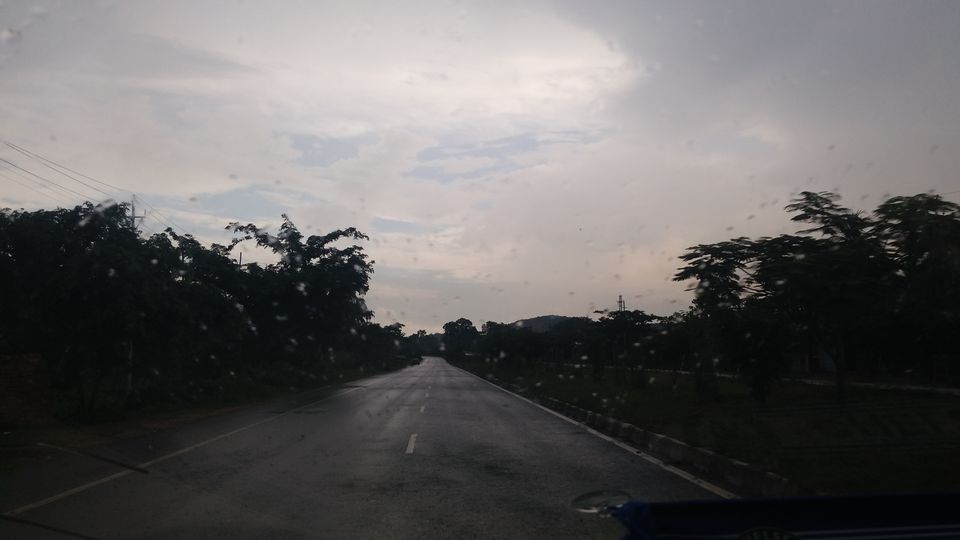 To cure the sleepiness and add a zing to the morning my roomie started playing the latest peppy songs with a good tempo. The splendid morning scenery, the slight drizzle and the lush greenery helped greatly as well, and the butter-smooth roads only added to the comfort of our journey. 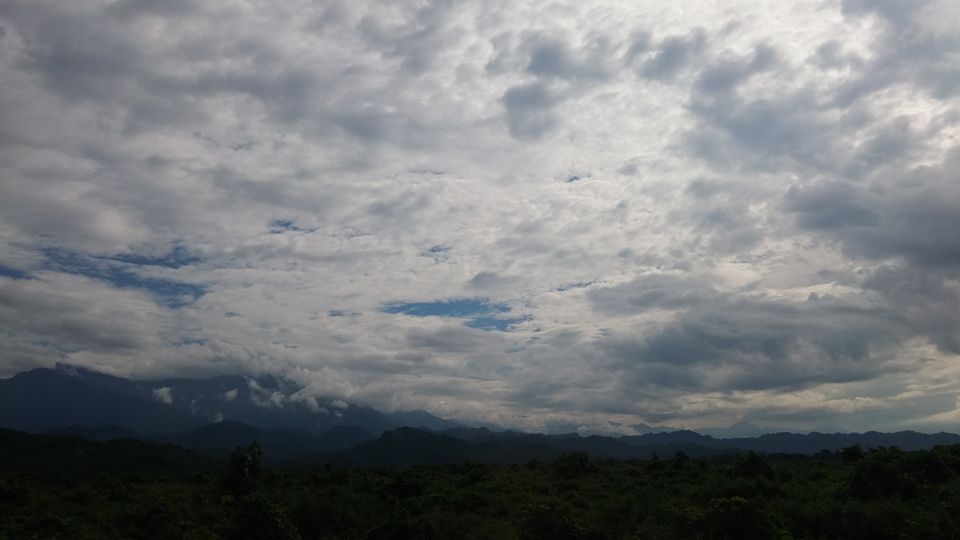 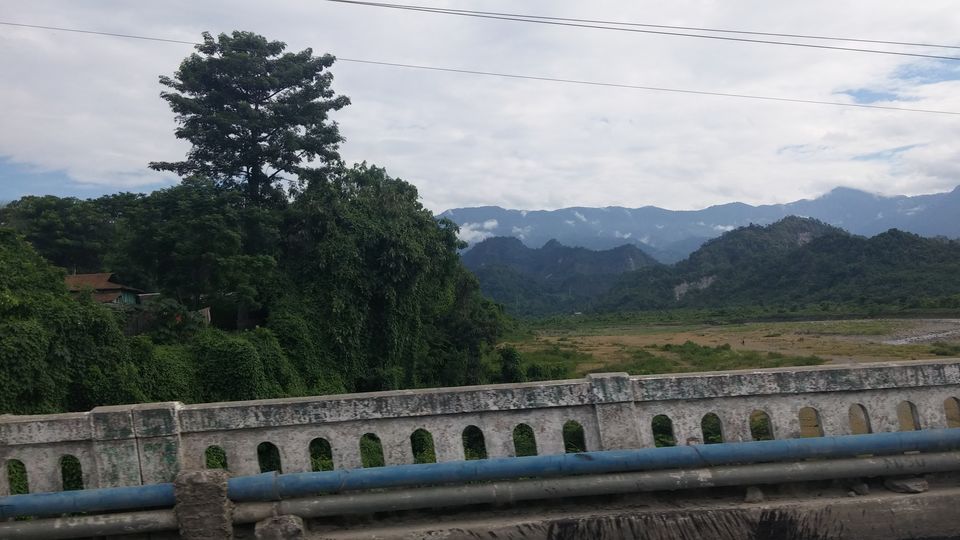 We passed by acres of rice fields and tea plantations on the way. The funniest part of our journey was to see the cattle laze on the road – be it cows, buffaloes or goats – they walked and sat right in the middle of the two-lane road without the slightest care in the world. We took the Rangia-Daranga Road, which took us to Samdrup Jongkhar in less than forty-five minutes. Once there, we were asked to alight from our vehicle and cross the border on foot. 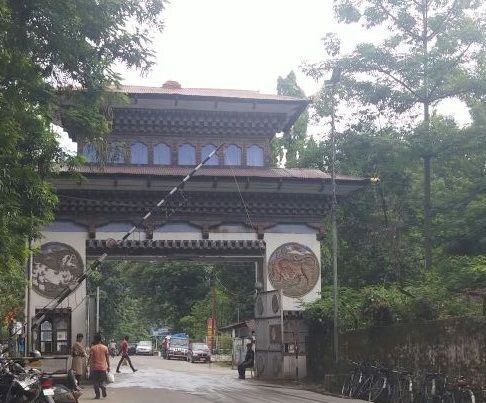 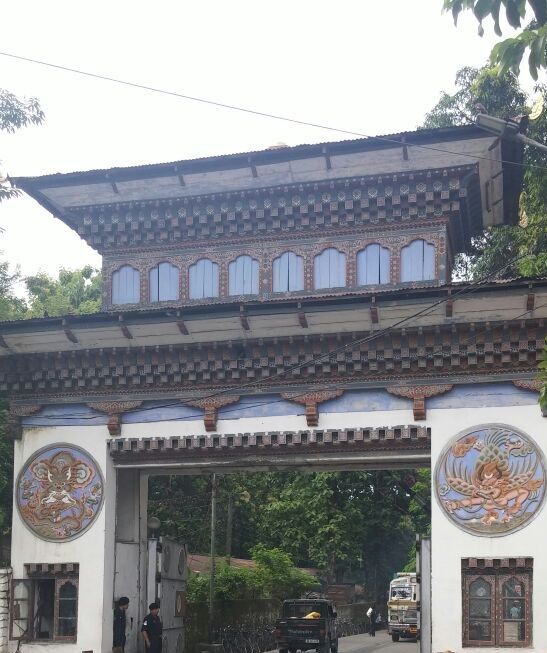 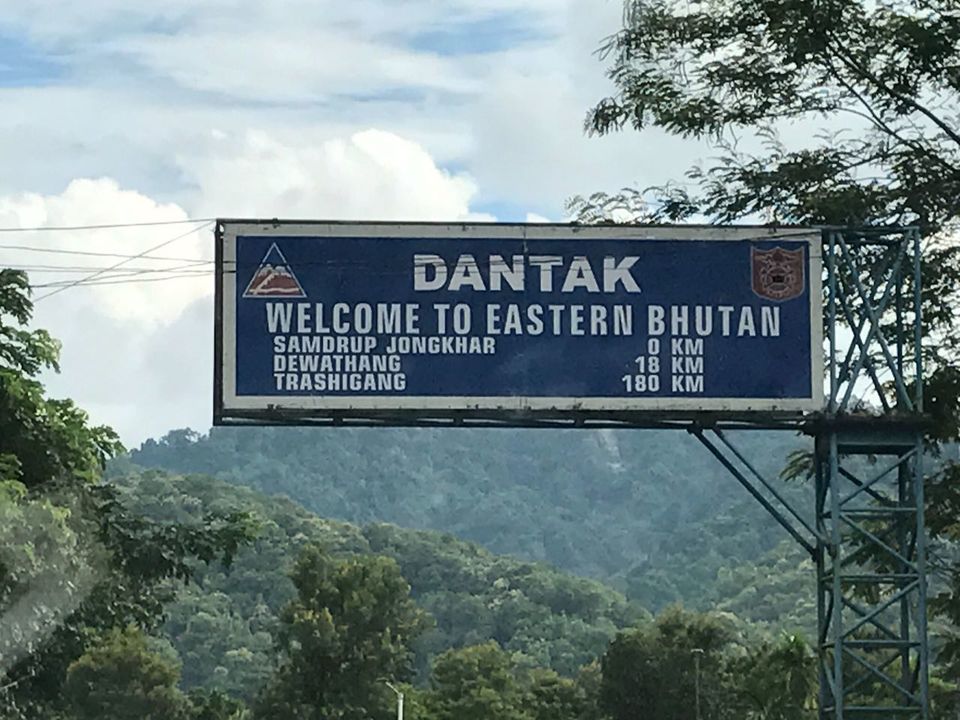 It took us less than a minute to fall in love with the Bhutanese architecture. Even though the design of the buildings was pretty simple, it was very elegant – it appeared as though even the buildings seemed happy! We passed by a few prayer flag installations on the way to the restaurant. After a quick photo session, we proceeded to go for breakfast at one of the nearby restaurants called the Tashi Gasel Lodge. 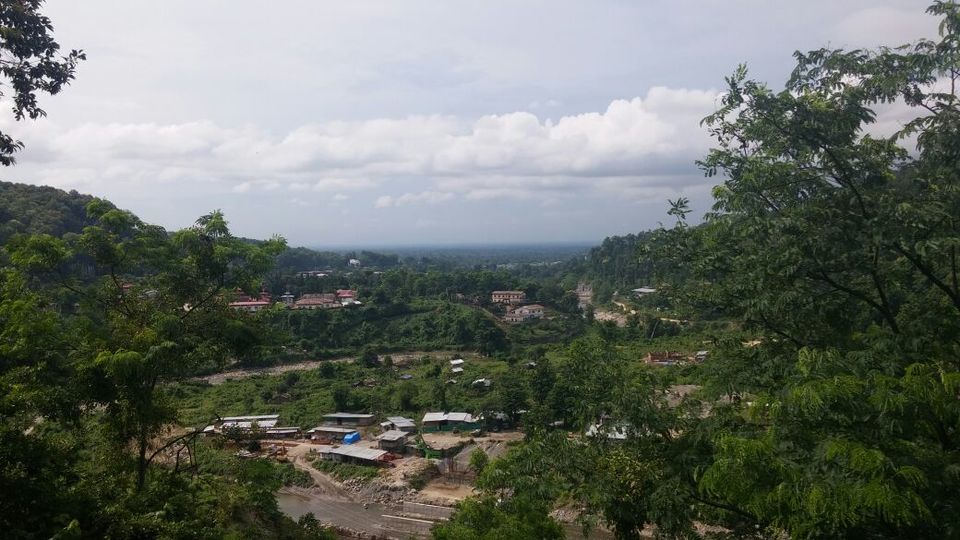 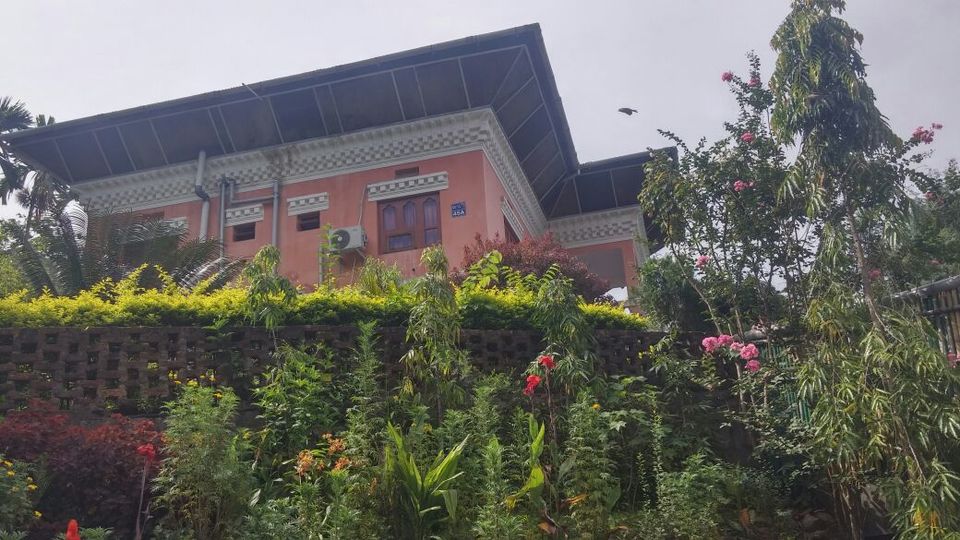 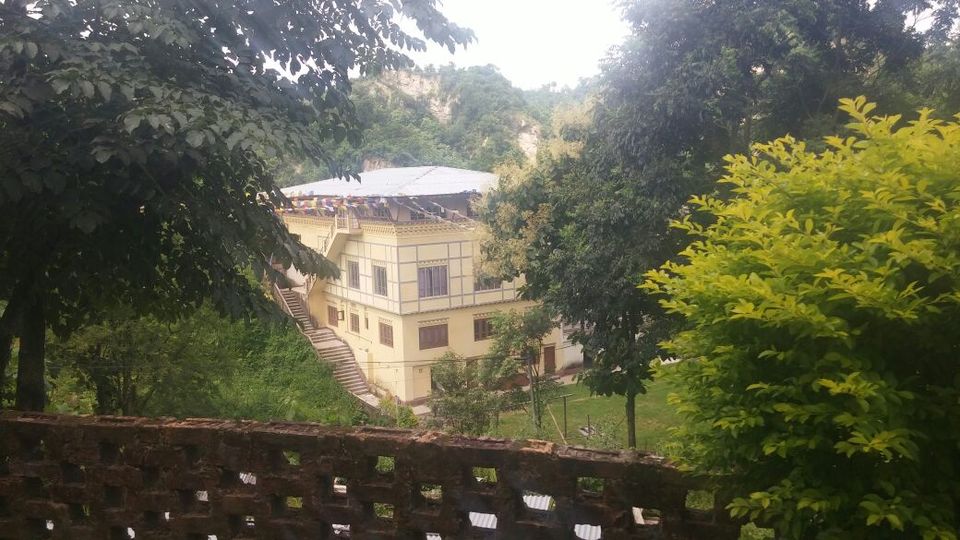 I was awestruck by the location – in addition to being a great sight itself, the place offered amazing views of the surrounding hills. We were slightly disappointed with the breakfast options available – even though the menu appeared to be expansive, all they had to offer on that day was masala omelet, sweet bread and fried rice. Personally I would suggest the omelette (the bread was sweet, and the fried rice wasn't exactly to our taste). 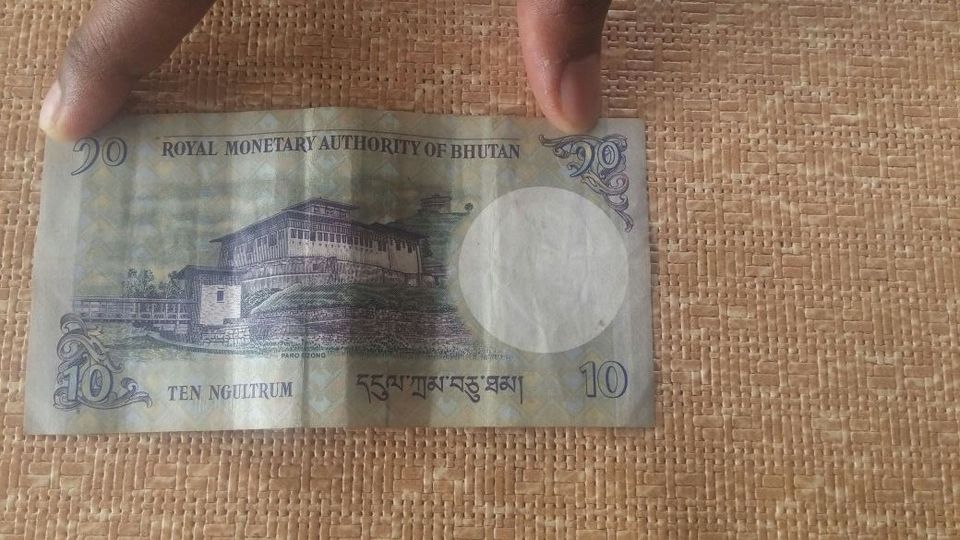 It was rather interesting to find out that the local currency Ngultrum has the value equal to the Indian Rupee. Rupee is widely accepted in Bhutan, and Ngultrum in Indian towns close to the border.

Finishing our breakfast as quickly as we could we proceeded to the next agenda on the list – sightseeing. The first place on our list was the Samdrup Jongkhar Dzong, which serves as the tiny town's administrative and judicial center. 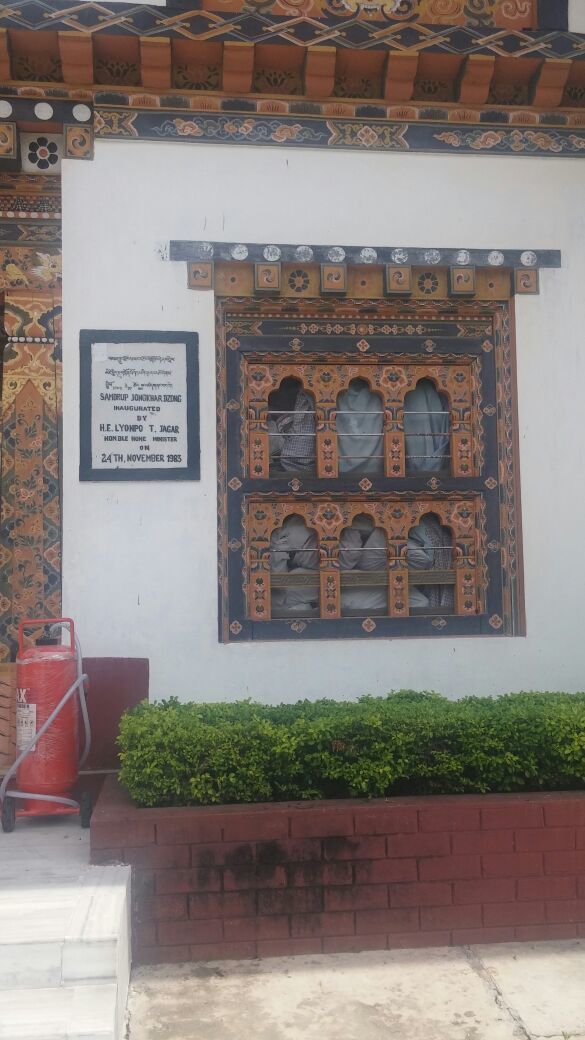 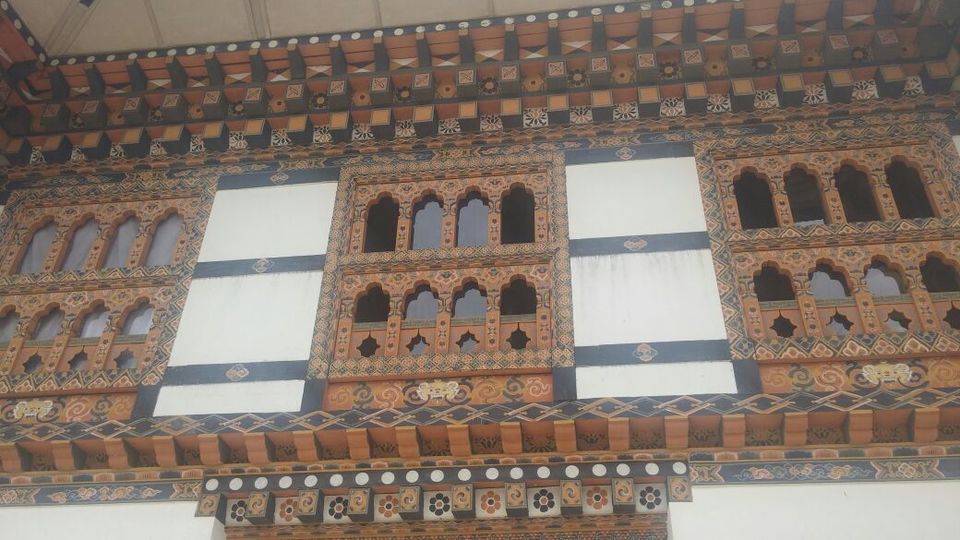 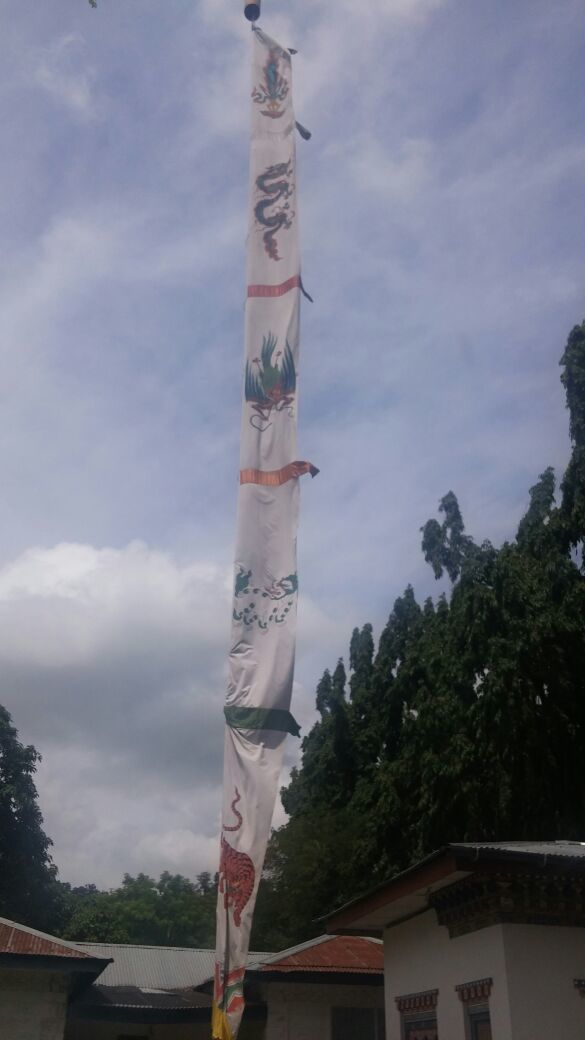 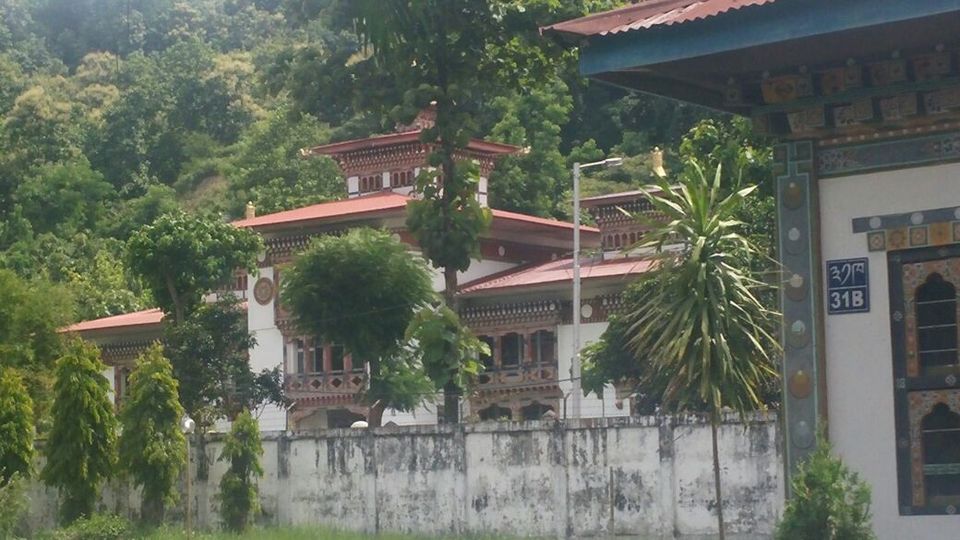 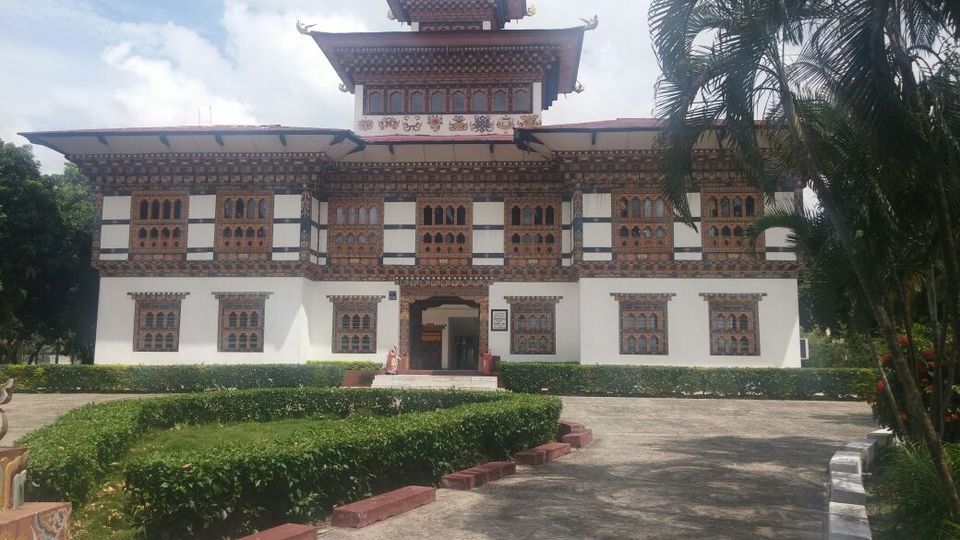 A Dzong is a fortified building with towering exterior walls surrounding a complex of courtyards, temples, monasteries and administrative offices. Being the newest, the Samdrup Jongkhar Dzong is built on a flatland and made of cement, unlike other Dzongs which are made of brick or stone at strategic cliffs or vantage points.

A short car ride led us to the next place on our list - Rabdey Dratshang, the residence of the monastic community in Samdrup Jongkhar. 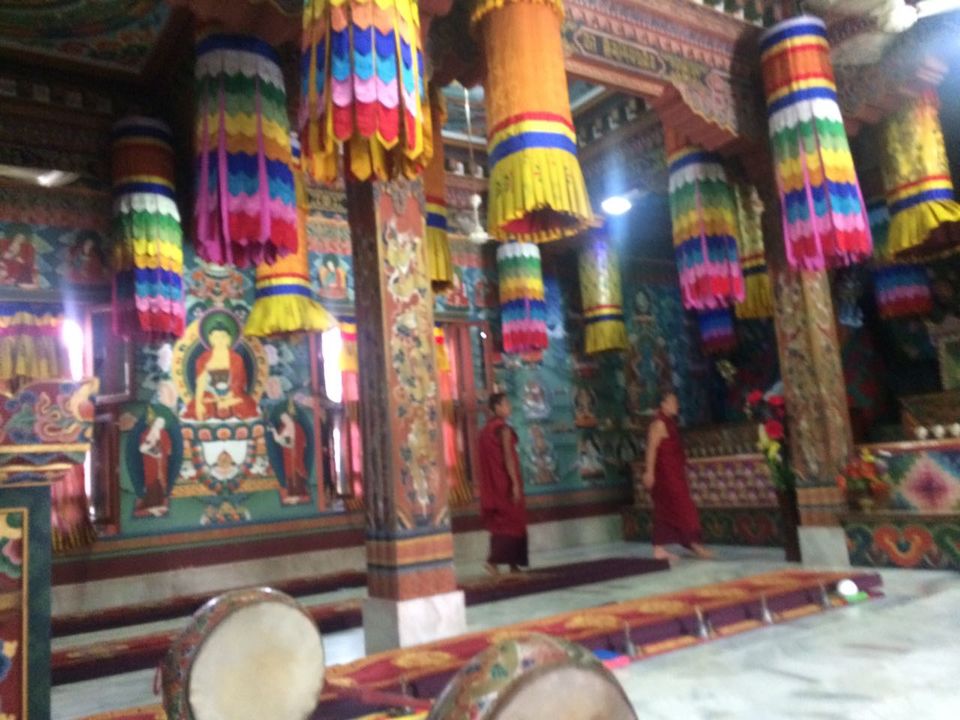 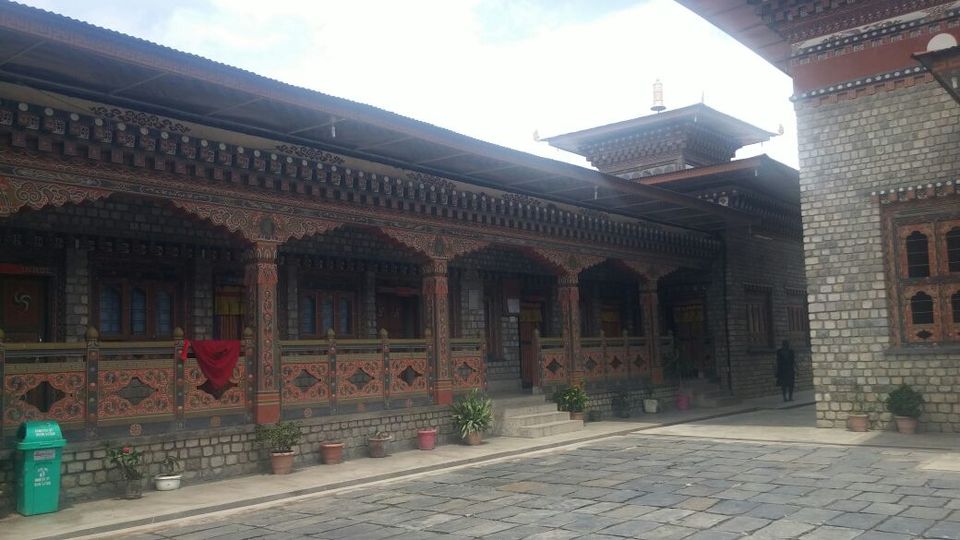 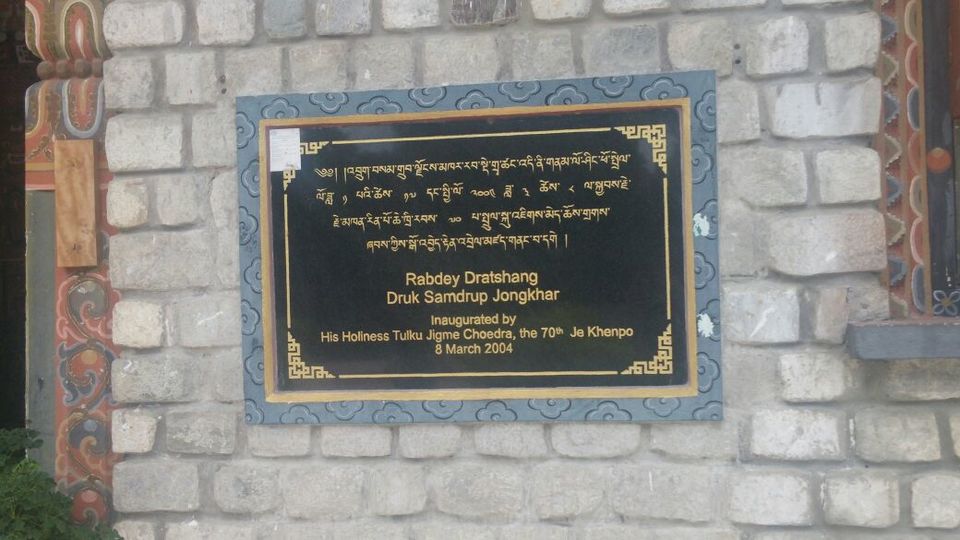 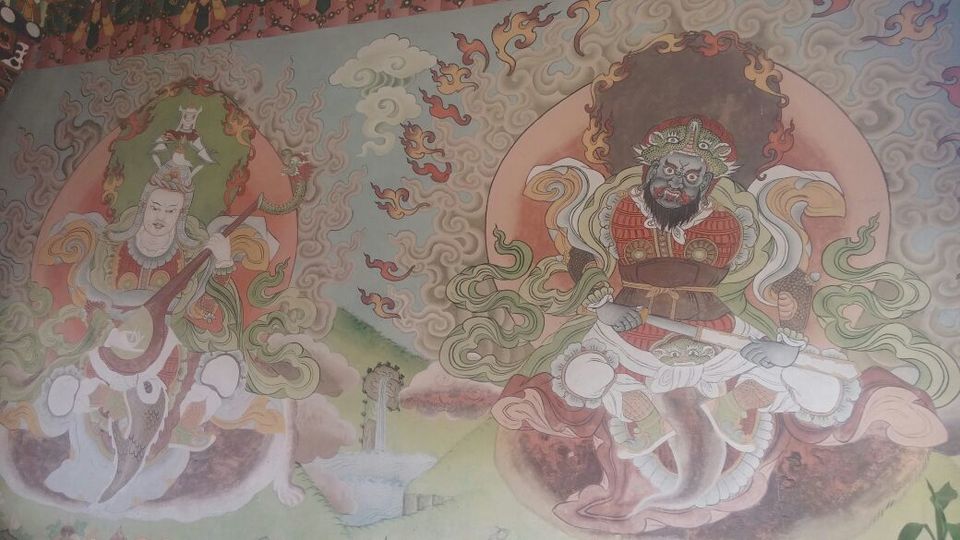 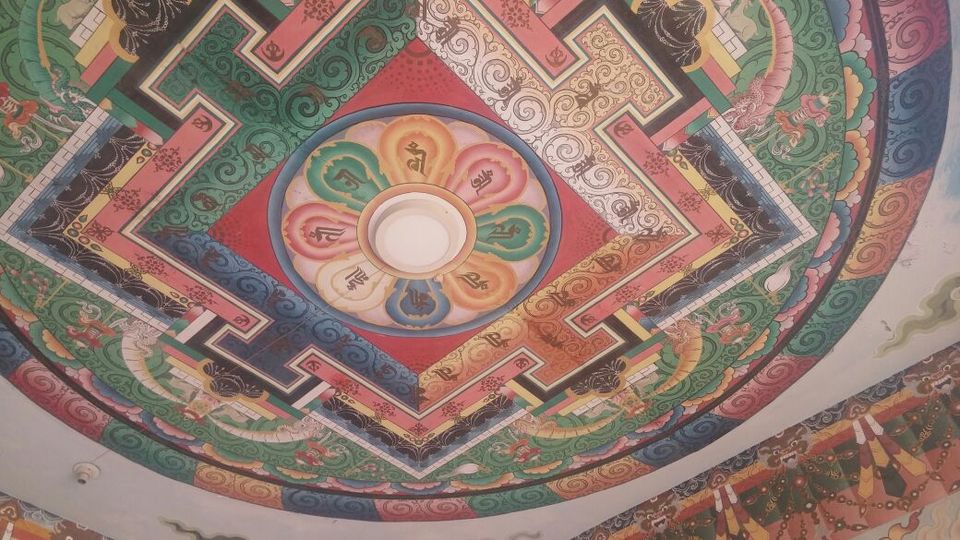 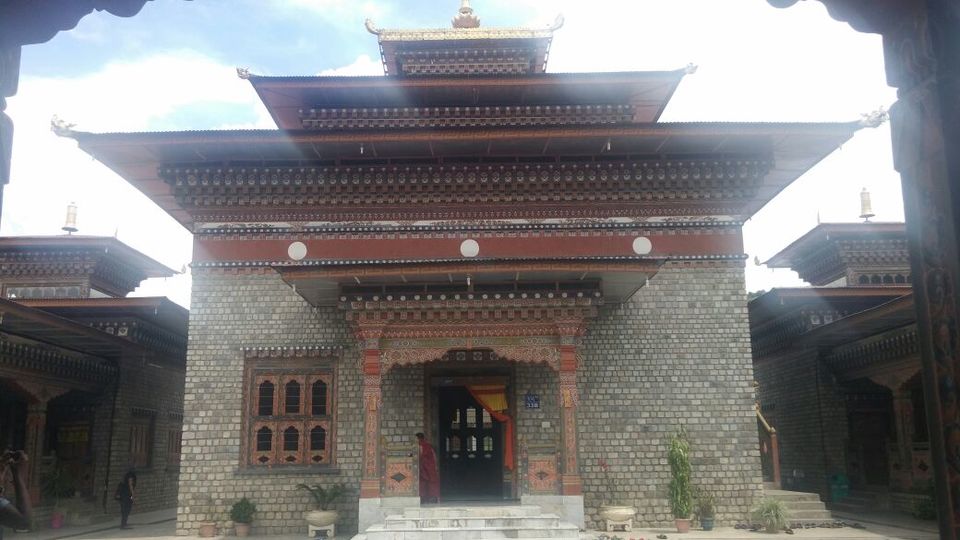 Inaugurated in 2004, the monastery has been adorned with very tasteful art right from the main entrance to the prayer hall and the houses behind. I loved how the monastery exuded a sense of peace and calmness. Even though the weather outside was hot, the temperature in the monastery premises was pleasantly cool. We stayed there for a while absorbing its serenity.

The local market, or Mella Bazaar, was the last part of our experience. It was interesting to note that unlike their Indian counterparts the shops had really simple-looking name boards – the boards were dark (most of them either navy blue or black) and had the details written on them in white paint. After enjoying ice creams at a shop nearby, we stopped to purchase a few souvenirs. We purchased prayer flags with the Divya Mantra on them - Om Mani Padme Hum. After a small break at a park nearby, we began our journey back to our side of the border, having earned the bragging rights to have crossed an international border without a passport, and to have gone abroad for for breakfast!

Samdrup Jongkhar, though just a slice of Bhutan, was enough to pique our interest in Bhutan and its amazing culture. I am eagerly waiting for an opportunity to explore more of Bhutan soon.

In case you plan to visit the tiny town, here are a few tips and tricks which might come in handy.

2. Samdrup Jongkhar is the oldest town in Bhutan. To enter it from Assam one doesn’t need travel documents. However, as an Indian, if you wish to explore more of Bhutan, you would need to carry either the passport or your voter ID card. In the recent days, I have heard of the border authorities also accepting Aadhaar, but I am not sure about how accurate this information is.

3. In case you are wondering about the currency conversion between Bhutanese Ngultrum and Indian Rupee, you don’t have to worry much as the exchange rate is 1:1. Indian Rupee is accepted in Bhutan, and Ngultrum is accepted in parts of Assam near the border.

4. The route to the border town is replete with greenery and has acres of rice and tea plantations.

5. If going from Guwahati, it is advisable to club the visit to Samdrup Jongkhar with other places in and around Guwahati, such as the Pobitora Wildlife Sanctuary and the Purva Balaji Temple.

6. It is essential to carry some food (preferably some dry snacks) along with you for the journey

8. Please keep your phones in silent mode and talk in a quiet tone while visiting monasteries.

9. Photography is usually allowed in the courtyard of most monasteries.

10. It is customary to give a small donation when visiting a monastery.