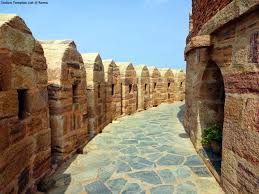 Imagine walking inside a hot, pitch dark tunnel 25 kilometers long. The Kings of the bygone era were not only brave, but they also were intelligent and that's why the carved tunnels deep inside the earth to escape from the more valiant and more powerful kings, who invaded their kingdoms. The entrances to the tunnels were usually concealed and within the confines of their forts or palaces, so that they could hide or escape unnoticed through these hidden passages when their kingdoms were invaded.

You can find one such a tunnel right under the Konda Reddy Fort in Kurnool, and it is said that this tunnel leads to Alampur, some 25 kilometers away, on the other side of River Tungabhadra.

Going back to history, it is said, that the Konda Reddy was the last emperor of Alampur who defeated the Kurnool Nawab several times. After a prolonged battle Konda Reddy was captured and imprisoned in this Fort. This fort came to be known as Konda Reddy Buruju, which means fort in Telugu.

Go book your tickets to Kurnool from Hyderabad or Bangalore or vroooom your bike and get set going....!

"AT THE END OF EVERY TUNNEL, YOU FIND LIGHT"