It was the end of September and I had just finished my Symposium in Delhi. With absolutely no clue what to do for the next five days, I asked the hotel authorities to drop me till Kashmiri Gate so that I can take a bus to Dehradun. With basic information from my friends I left Delhi hoping to meet a few of my old friends at Dehradun. It was my first night ever at Uttarakhand and I was welcomed by Kaushalesh and his family with open arms. After grabbing some amazing breakfast at their home the next day we moved to FRI to meet my school friend from Ziro, Sunya. Such a lovely day it was. It was hard to say adieu to all but then I had to move on.

With hours of previous night's brainstorming, reading blogs (Thanks to India Hikes for that), by now I got some vague idea about Naag Tibba and realised that I will have to find a place to stay overnight in Pantwadi enroute Nainbagh, to start the trek. Kaushlesh dropped me to the Bus Stop where I was accompanied by Vikas (my sweet mate from IIT Guwahati) for a while. I took the bus for Nainbagh and chose the window seat to enjoy the beautiful mountains and greenery. The bus moved along the alleys crossing the crowded Mussorie to reach the final destination. Meanwhile, I started talking to other passengers and detailed myself with the possibilities of accommodation, food and duration of trek. I was worried as well as excited, thinking 'What's Next?'.

On reaching Nainbagh, I stopped for a while to realise that this is the point which bifurcates to Gangotri and Yamunotri. I was awestruck with the view and decided to cherish the moment by sipping a cup of tea. And there I met a clean shaved bald headed guy Sunil, who was the owner of a tea stall. Refusing to take money from the 'Guest from Assam', I was helped by him to find a shared Tata Sumo to Pantwadi (30mins from Nainbagh towards Gangotri). The Sumo driver (Arun bhaiya), another interesting personality helped me too in finding a place to stay. Himmatsingh Parmaar, popularly called 'Mamaji' provided me the accommodation in a very affordable rate as I was a student and recommended by Arun. I realised by now what Arun bhaiya meant by the phrase 'Pahadiyo me ab bhi jaan hai'.

The same evening I met a guy at Mamaji's shop who was an intern at 'Goats Village'. Goats Village, a few kilometres uphill is managed by 'The Green People' promoting Eco-tourism, Organic farming, Rural development and what not. I was fascinated that something so unique has been set up in this area with minimum human settlement. After the fruitful conversation and delicious Garhwali dinner, I decided to sleep early and start bird watching as soon as I wake up the next morning. 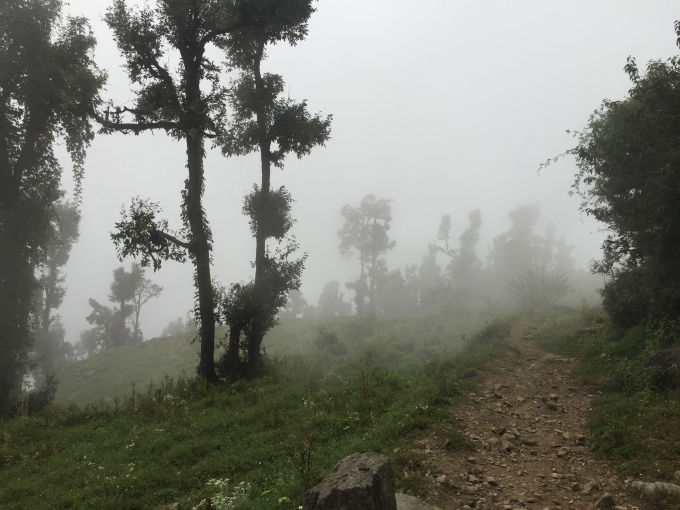 The next day after a grand see off, I took the same shared Tata Sumo from Pantwadi to Dehradun enroute Nainbagh. While the Sumo stopped to drop a few passengers at Nainbagh, I just could not stop myself from getting down and giving a hug to Sunil hoping to meet him someday. I was back to Dehradun waiting to meet another friend at IIRS. The next day I had to meet a few friends at IIT Delhi accompanied by Anirudha from IIRS, without which the trip would have remained incomplete.

The trek might have been a random one for me, but it still remains to be the warmest of all and I shall revisit the place sometime soon.

Note for Readers: It is not mandatory to have a guide in this trek but important to use your common sense not to get lost. During winters it is not advisable to camp alone as it snows heavily.

Mamaji will have a solution for your problems. All that you need to do is 'Respect the Mountains'. 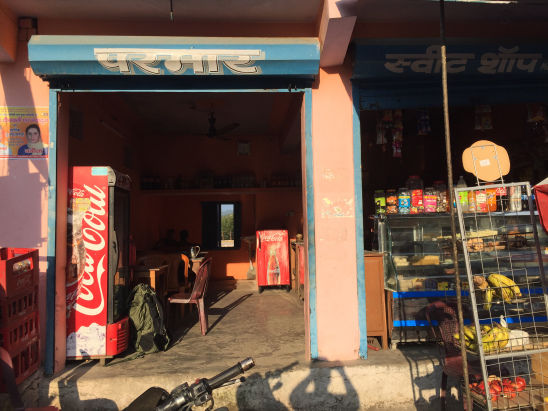 It was my third day of the break and I started my trek to Naag Tibba at around 7:30 am (which I must have started early). With little hopes of staying back at the peak, I packed some food for myself. The trek started with crossing a few village houses and buffaloe sheds. As I started birding, I realised that I am in a paradise of birds and it might take me the whole day just to reach the peak. I stopped my bird watching at around 10am to focus on the trek. To name a few, Himalayan Bulbul, Skimitter Babbler, Red billed blue magpie etc. were my lifers.

Crossing several shepherds on my way, I realised that this trek for me is a day to day activity for the localities. Climbing uphill relentlessly, I reached a point of absolute solitude. I stood there for a while to refill water from a source and reenergise myself. Crossed were also a few points where tourists camp (pre booked camps) and also the infamous Goats Village. Surprisingly, I was the only traveller that day on the trek. Enjoying conversation with the locals passing by, I learned a lot about the vegetation and source of livelihood about the place. Also learned that how 2017s unpredicted change in rainfall pattern effected the livelihood of farmers.

I did get lost once but again the kind hearted and helpful people of the mountains showed me the way. Finally, after several ups and downs (literally) I managed to reach the Naag Tibba temple at around 2pm. As I entered the temple, I was welcomed by a group of people who were worshiping the deity and performing rituals. I hesitated initially but couldn't resist after I was treated with much of love and affection. They offered me food which was probably the best I had in past few years. Khichdi, Dahi, sabji and lots and lots of sweets. The kind of hospitality I received made me realise the importance of being humble to everyone. Treating everyone equally and loving everyone equally is what makes you a complete being. I was a complete stranger, yet I was treated as if I belonged to them. I have lived that moment and I wish to relive that moment again. My plans were to cross Naag Tibba and reach Jhandi (2 hours away from Naag Tibba). Guess that will have to wait for my next trip.

I started moving down with the same group of people as they too were from Pantwadi. It was getting dark and I had to ensure I reach before that, hence, I ran down the valley, which was again one of the most interesting things I did in a while. While coming down, I did find a couple of travelers moving towards Naag-Tibba (Guessed they were camping). With all pride, I showed them the way up.

As I got back to Mamaji's hotel, I was cheered up by the people for making the trek in one single day. And boy! that felt like an achievement.