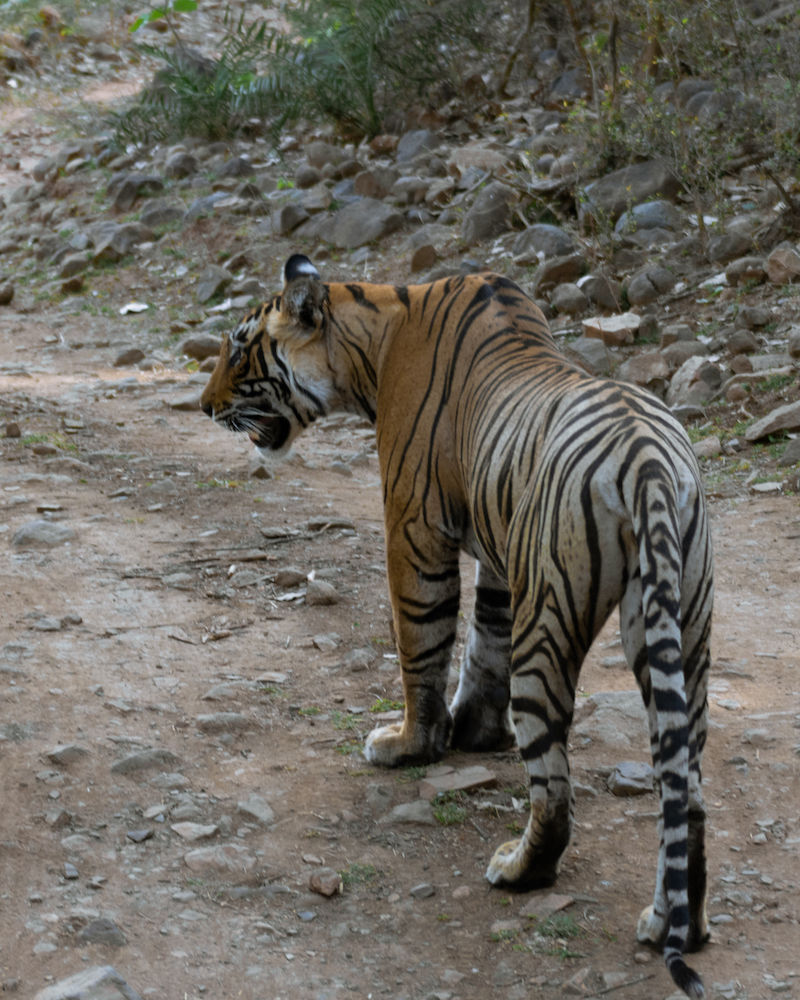 On a summer afternoon, I received an email with an invitation to visit Ranthambore. Now, under normal circumstances, anyone would avoid visiting Rajasthan in the scorching heat of May, but this trip offered an incentive that I couldn't look away from - testing the UPF gear by Columbia Sportswear, specially designed for the ruthless Indian summer, all while adventuring in the land of the mighty tigers and all things wild and free! We decided to meet in Delhi and commence our road trip to Ranthambore from there. I was told I would be joined by 7 wildlife and photography enthusiasts from all over the country. So as planned, we met, we acquainted and we set off. It took us about 10 hours, including a generous lunch break to get to our destination -Ranthambore Heritage Haveli, a stunning hotel with 2 huge courtyards, a pool and traditional Rajasthani architecture, a perfect place to stay after a tiring road trip. After dinner, we were given a quick briefing by Shivang Mehta, a seasoned wildlife photographer and nature enthusiast. " Ranthambore National Park is India's prized wild jewel and is a unique amalgamation of Indian history and wildlife. There are only a few places in the world where you can see a wild tiger walking against the grand backdrop of an ancient fort. And that's exactly what makes Ranthambore so special", Shivang mentioned.

As the session ended, we were left with amazement and looking forward to everything that the Columbia team had planned for us. The next day was going to start early and last long, so we decided to crash early. We were scheduled for 2 safaris the next day, one at the beginning of the day and one at the end, reason simply being, higher chances of tiger sightings. We woke up at around 4:30 AM, had a quick and light breakfast and left for Zone 5, our first excursion of the day. It is advised to enter the 1,113 sq kms wide safari area with the earliest light. As we drove towards the entrance of Zone 5, we could sense the stillness that surrounded us. The jungle was untempered from the night before and we wanted to make no change to that. As we rushed towards the denser part of the park, looking for tigers with bated breath, we had our first sighting- a glorious family of leopards. So naturally, the most beautiful part of that meeting was the element of surprise. As minutes passed, the sun became harsher and we eventually decided to put on our UPF gear by Columbia Sportswear to save our skin in the scorching 47°C. After acquainting with numerous Peacocks, Desert Monitor Lizards, Snub Nosed Marsh Crocodiles and Sambar deer, we returned to our hotel without any tiger sightings. On our way back, we enquired at the entrance gate if other zones had any success and were told that Zone 4 managed a couple of tiger sightings. It gave us hope for our second safari of the day.

As we reached the hotel, we decided to have lunch and sleep before leaving for our second safari at 3 PM. Unfortunately, after traversing through the entire Zone 4, we returned with mere disappointment. It was during the dinner the same night that we all decided to try our luck for the last time in the morning before leaving for Delhi. We booked a canter at the last minute, crossed our fingers and went to bed.

The next morning, we entered Zone 1 with our eyes wide open and hopes soaring high. Within 20 minutes of driving around the trails, the canter suddenly stopped. Our guide turned and signalled us to stay still and alert. Our hearts pounded with the sounds of birds and monkeys, and then came Sultana - the daughter of Noor. She appeared from the right of our canter and stood about 5 feet away from me. For the first 2-3 minutes, I completely forgot about the camera in my hand and how people would pay to be exactly where I was standing. I stared till she started moving towards the back of the canter, crossed the trail and sat graciously by the pond about 60 feet away from the trail. It gave us enough time and area to take pictures of this stunning 3 years old big cat. After spending about 45 mins with the mighty queen of Zone 1, we returned home with the memories of an enchanting being and her aura, that will linger around for a very, very long time.