North East India is perhaps the most avoided part of India when it comes to tourism. Due to the political instability and local conflict not many tourists venture here. Therefore, these sister states, as they are called, largely remain untouched. Rich in culture and diversity, with a number of tribes that descend from various racial backgrounds, starting from Mongolia to Colombia. The people of the North East even look drastically different than the normal Indian, with petite features. This is why they are prone to discrimination in India and most tribes are fighting for their own states. There are quite a few times, when there is armed conflict in these parts and we were unfortunate to be in the middle of one. But, instances of violence aside, on a day to day interaction the people here are extensively welcoming and warm. As for the dangers of travelling, the exotic sights of the snow capped Himalayas, the Buddhist monasteries and the flora and fauna here, with some great species like the one horned Rhino, will all make the dangers worth it.

Hoping to catch a glimpse into the unknown, we flew up to the rarely visited 7 North Eastern States of India. North of Bangladesh and sandwiched between Myanmar and Bhutan, these often forgotten states are home to many interesting tribes people, forests, tea plantations and wildlife reserves. Needing permits in all but three states and running out of time on our visa, we decided to spend the extra $10 and risk flying into Nagaland without a permit. We have followed the thread of the 'Nagas' (lizard /dragon people) and their symbolism through many continents and cultures and here was our chance to visit their namesake homeland. For centuries, over 20 headhunting Naga tribes fought off any outside intruders, and when things slowed down they fought each other. With inter village wars happening as late as the 1980's it is still common to see skull motifs in art designs. Each ridge top village, sporting a new church that replaces their animist traditions, prominently displays its 'treaty stone' declaring peace agreements between previously warring villages. Nowadays they are content to just cause trouble once in a while in hopes of separating from Mother India. Considering India swooped up all these little states and former kingdoms against their will, from Tripura all the way west to Kashmir, it's not surprising that her children are rebelling to reclaim their independence.

We started off from Assam, moved into Meghalaya and after exploring those two states, we headed to Sikkim and Darjeeling. Here are some of the places we stopped by!

It's difficult and sometimes extremely costly to get permits to get into a certain state like Arunachal Pradesh. Getting into Assam and Meghalaya is relatively easy. So, we started with the capital of Assam. Guwahati is a busy, dirty city, but the area along the Brahmaputra River and the fertility temple on the hill, 7 km from downtown, is worth a look. Guwahati has a vibrant culture, but we were in search of the famous wild one-horned Rhino. 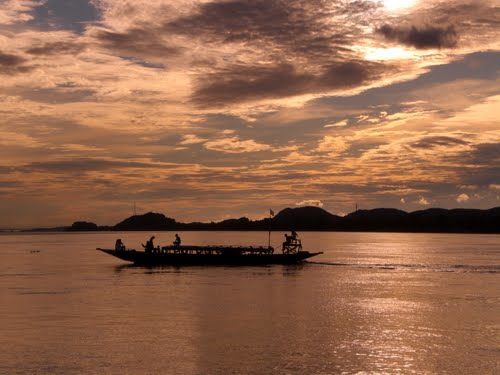 Arranging for transportation here turned out to be a problem, but we managed to hire a long-distance driver. Following along Assam's mighty Brahmaputra River, the bus slowed down and we jumped off at the crossroad, hiring an auto rickshaw down the dusty 'non-road' towards Pabitora Wildlife Sanctuary. As we bumped along we couldn't believe our eyes as wild rhinos, some with new babies, grazed lazily in the green fields along the road. We just sat on the ridge above these massive creatures and enjoyed watching their antics amongst the small ponds full of lotus with massive green leaves. As pointed out in "The Gods Must be Crazy", we wondered if these characters, like their African cousins, were notorious for stamping out any campfires they see? 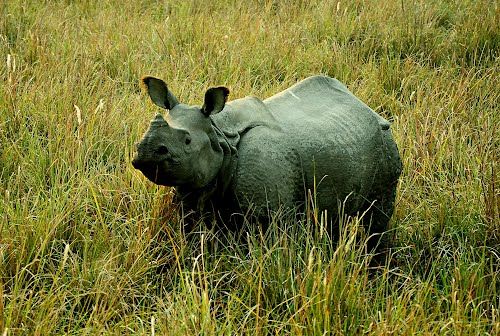 From Assam, we headed straight towards Meghalaya. Shillong is a curious combination of old British colonial hill station and the modern Indian city. It has butterfly and cultural museums, shops, lakes and parks, but by far the most interesting place is the large hillside market full of colorful Khasi tribes people chewing 'kwai' or betel nut. Everyone is busy selling their vibrant, freshly harvested vegetables. It is worth an afternoon to just sit in various spots, watching and interacting with these fun, welcoming folk. 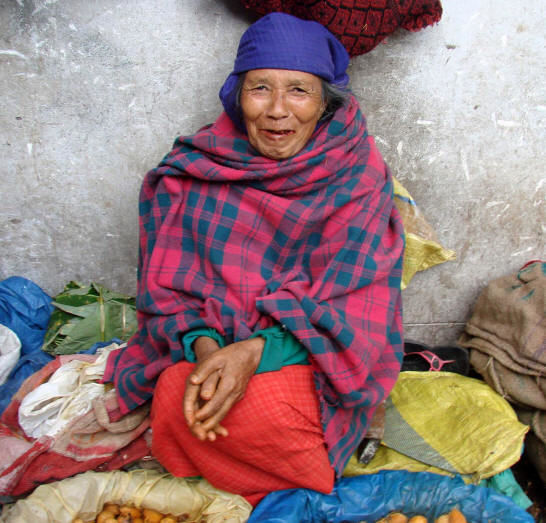 Set on dramatic cliffs looming high above the Bengal Plains is Cherrapunjee, statistically one of the wettest places on earth, receiving up to 800 inches of rain in one year. Three guesses - what was it doing when we arrived in the little village? Against all odds the gray, rainy skies parted and sunny, blue skies guided us out to Thangkharang viewpoint and back to Mawsami and thundering Nohkalikai Falls (supposedly India's 4th highest). We were invited over by a lovely Indian family for lunch. 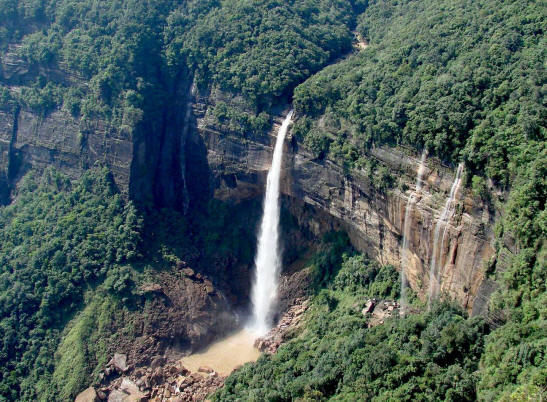 Downhill from Cherrapunji is Mawshamok. This place has a number of 'living root' bridges that the ingenious Khasi people have trained to span the streams and provide 'living' pathways or bridges between isolated villages. We were invited by a lovely Khasi family and spending time with them was a splendid experience. Once the skies cleared, we enjoyed the lively weekly market and arranged transport to the stunning natural sites in the area. 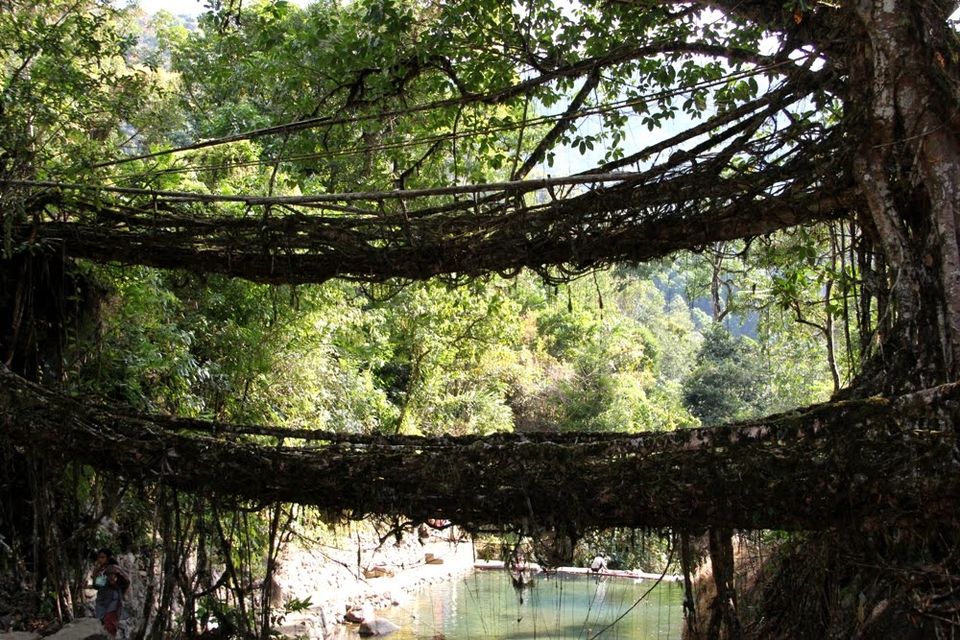 Nestled in the Jainta Hills is the fascinating village of Nartiang, home of the Pnar people. This tribe descends from Mongolia, Thailand and/or Cambodia and are animists still practicing 'magic.' They may have multiple wives, in contrast to the surrounding Christian settlements. They are quite controversial in the area. Their Durga temple was once used for human sacrifices (stopped by the British) and the "endless hole" next to the altar was used to dump the heads of the unfortunate victims. The hole now holds only candy wrappers and fruit - being used to slaughter goats once a year when a visiting Bangladeshi priest presides over the ceremony. 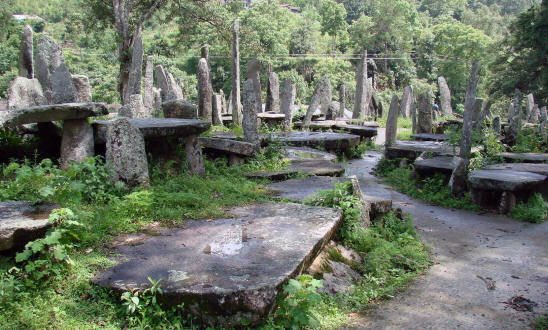 Haflong is Assam's only hill station, which explains why it was so tourist heavy. On our first day we were spontaneously invited to attend the Spring Planting Festival that evening. We weren't disappointed as the stage was filled with enthusiastic young people singing, dancing, drumming, reclaiming their traditions. The view was stunning, the market was friendly, the vegetables were fresh, the 12 cent samosas were hot, and Joseph had discovered the only decent little guesthouse in town. 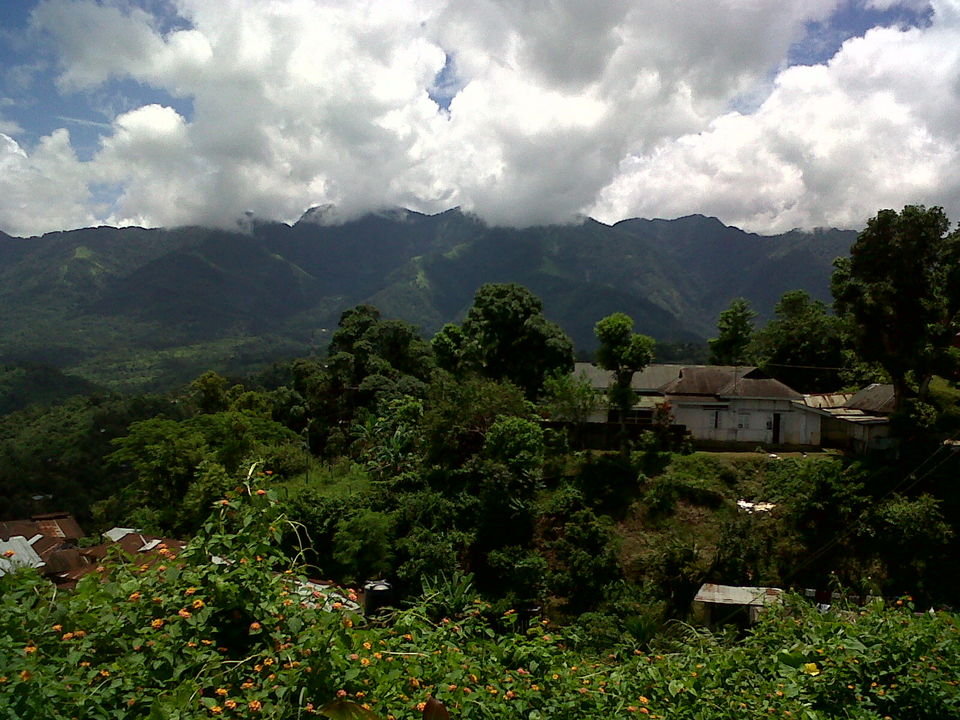 Sikkim is also called the "Abode of the Gods." Obscured by thick forests and guarded by soaring snow-capped peaks, this dramatic, tiny kingdom, now a state, has valleys full of wild orchids and rhododendrons, bamboo groves, untouched forests, wild rivers, gentle streams, pristine lakes and snow fields home to the legendary Yeti. Standing sentinel over the western border is the magnificent and sacred Mt. Khangchendzonga, the third highest peak in the world, home of Sikkim's guardian deity. The flora and fauna here is abound with around 4000 species of plants found here. Even though you won't spot the Yeti, the animals here are abound. The diversity extends to the people too with a mix of people living here, the Bhutias, Nepalis, Tibetans, Subbas, and the Lepchas. 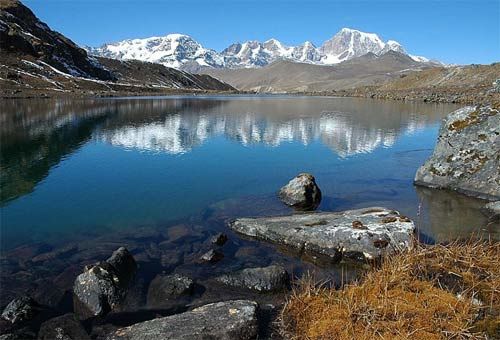 The road up to Gangtok winds through lush forests, past hundreds of little waterfalls. Arriving in Gangtok is comical as hundreds of Indian families walk the hills clothed in hilarious attempts to stay warm at this cold hill station elevation of 6000 ft. - a relief from the 100 degree weather on the plains below, but a shock to the system. We spent the next day driving through winding, narrow mountain roads, exploring waterfalls and gazing over spectacular vistas. We saw Himalayan bears, wolves and civets in their forested surroundings at the Zoological Park; later spotting a magnificent snow leopard, red pandas and finally surreptitiously petting a purring female mountain leopard through the wire, as her enormous male companion growled with disapproval or envy. Stopping at the Namgyal Institute of Tibetology, the Orchid Sanctuary and Enchey Monastery, we finally twisted our way up to the Rumtek Gompa Monastery. 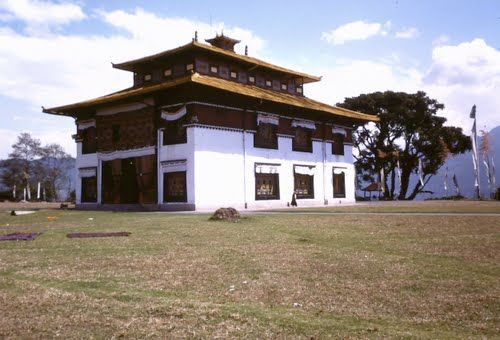 At 6500 ft elevation, Pelling is a funny little village, its development hanging precariously on the unrivaled views of Mt. Khangchendzonga (Tibetan meaning: big 5 peaked snow fortress). Ritualistically, weary travelers drag themselves out of their warm covers in hopes of glimpsing this elusive 28,209 ft peak, knowing that it only grants brief audiences for those who persevere. The next morning as the first rays of the sun kissed the summit of Mt. Khangchendzonga, the world's 3rd highest peak, the veil of clouds parted, revealing the 11 snow peaks, standing like sentinels at the gateway of the Himalayas.

One of Sikkim's oldest and most significant Nyingmapa Buddhist 'gompas', or monasteries, it was founded in 1705. Named "Perfect Sublime Lotus", it is located high atop a hill surveying the surrounding valley, the location in the pine forests was spectacular. We were spurred forward up the path by the sound of a lively 'Puja' by 50 monks, complete with horns, drums, cymbals, singing, chanting and rice throwing. The hall upstairs houses fierce statues of deities, and the top floor has an intricately painted 20 ft tall carving, created by a single monk in 5 years, supposedly from one tree trunk, depicting the usual lower terrors of hell, life on middle earth, and the wonders of Padmasambhava's heavenly abode. Recently painted colored murals line the walls and Tantric, funny business involving even the less than bashful blue Buddha, are covered by 6 gold cloths, rewarding only the curious. 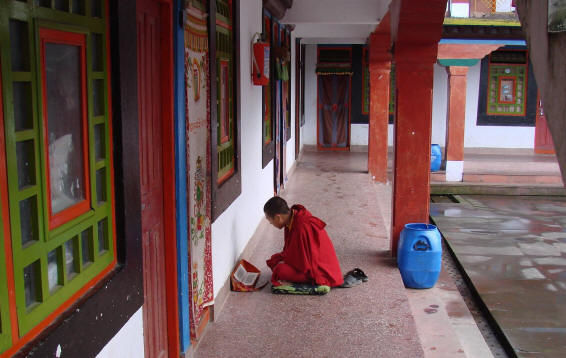 The next morning, we set out in search of the SangaCholing Monastery heading up the mountain. The ascent brought us past forests, green farmland and remote villages in the valleys below, and finally up through the mist to the tiny monastery perched up in the clouds. The view was dramatic amid the fluttering prayer flags and the monks, all dressed in sweatpants and T-shirts were friendly, making up for the undistinguished little temple. We were invited over and over again to join them in their Puja the following day, but that climb isn't something we wanted to repeat. 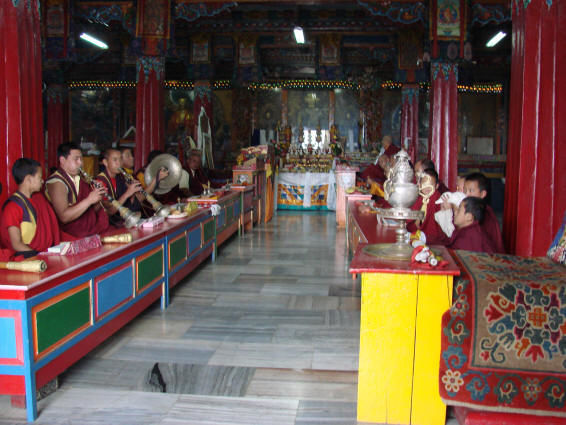 From Pelling, we continued towards Yuksam, where we were greeted by villagers singing merrily as they went about their day, birds chiming in, yak bells tinkling, and streams providing harmony. We feasted our eyes on one of the snow peaks poking out above the mist settling in on the green mountainsides. Quiet and peaceful. We were drawn in like moths to a flame and we spent the next 4 days visiting with locals at little tea shops, hiking through the countryside, and cooking our dinner. Trekking through the mountains around Yuksom is the main reason a few straggling travelers end up there. The arduous 10 day treks up to the snow mountains or Goecha Peak require permits, and thus are expensive ($30-50 day). Just picking a path and seeing where it leads is a rewarding alternative. 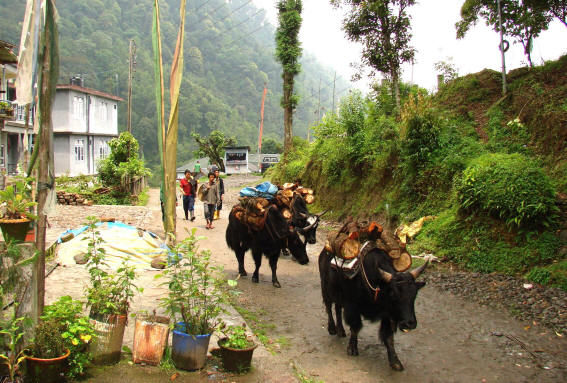 The perfect springtime weather of Yuksom was replaced by clouds, cold, and the often rainy weather of Darjeeling. Formally the home to Nepali born Tenzing Norgay, and now his son, Jamling, it is easy to see that he is revered in Darjeeling. On its face, Darjeeling seems like just another one of these hill stations flooded by hoards of Indian tourists escaping the heat of the plains, just arrive ready to jump into the fray. Weather permitting, there are endless attractions to take in, including unbeatable views of the mountains, a zoo, museums, temples, monasteries, and the infamous Toy Train, a steam engine built with a 2 ft wide track system in the 1880's mainly to haul potatoes, of all things. 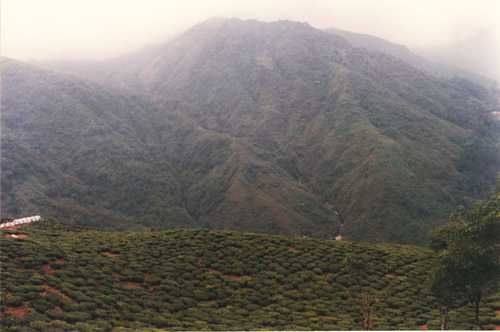