The Road ‘Barely’ Travelled – Journey to the hidden paradise, Tawang

Brimming with cultural, national and military history, there are a few places that can be as enticing as Tawang. Located in the north western part of Arunachal Pradesh, bordering Bhutan on the west and Tibet on the north, it houses the largest Buddhist monastery in the world (outside Lhasa), it is the birthplace of the 6th Dalai Lama, has one of the highest motorable passes in the world, is also the site of the historic 1962 Indo Sino war, and till date China claims it as their territory.

From Tezpur onwards it is all uphill. Once we entered Arunachal Pradesh via Bhalukpong, we could witness the sudden change in the air. Located along the Kameng river, Bhalukpong is a hub for wide water rafting. There is something transitional about Bhalukpong. From a Hindu surrounding there is a sudden shift towards Buddhist influence, with prayer flags and small chortens adorning the roads.

I was lucky to bump into some men from the Nishing tribe. Wearing their long hair tied up in a knot just above the forehead, called the Padum, the Nishings can be easily distinguished and they were more than happy to be photographed. 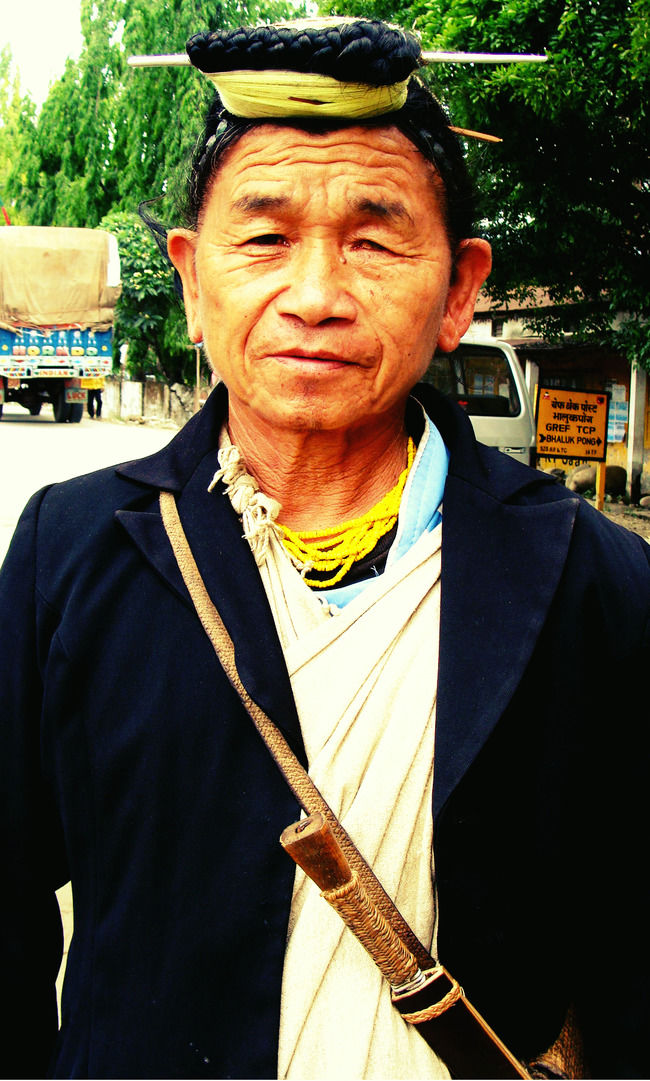 A quite valley that sounds of the bubbling brook, Tenga is a very small town which can be crossed in barely 5 minutes. Low clouds surrounded by mountains and the melodious flow of water, it is the kind of place Ruskin Bond would have chosen to write a story.

If this is too laid-back for you, then Tenga also has monasteries and a bird sanctuary nearby, ready to be explored. The Chillipam monastery, atop the mountain and old fort ruins at Rupa are worth visiting. 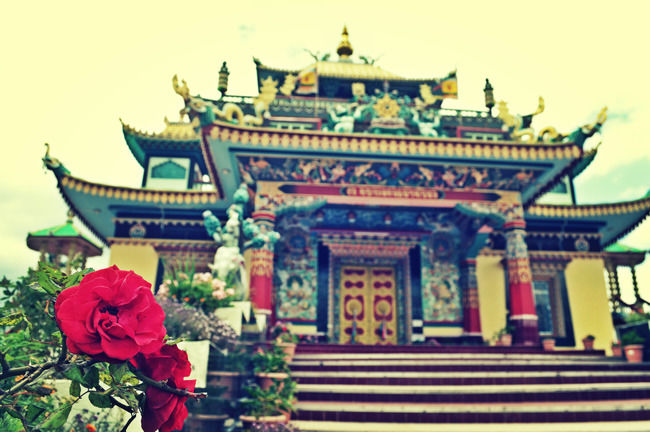 The road to Tawang is filled as much with history as is Tawang itself. After crossing towns like Bombdila(known for its apple orchids) & Dirang(known for its therapeutic hot springs), we climb higher until we reach the gateway to Tawang, Sela pass. S

ela pass which stands at 13, 700 ft above sea level, ornamented with colourful prayer flags fluttering in the chilling wind and a fantastic view of the Sela lake, makes it one of the most beautiful if not the highest motorable mountain pass in the world. By now my nose was red with cold and ears blocked due to the high altitude. 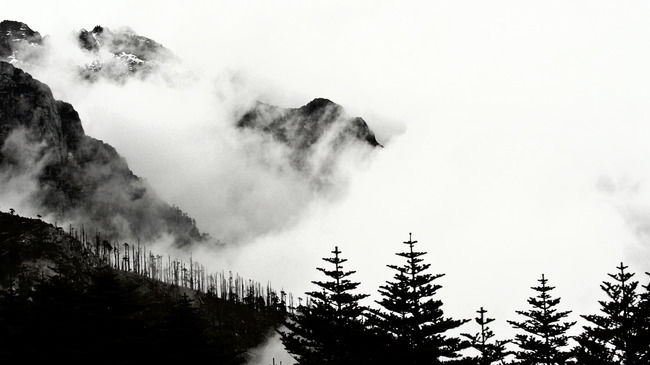 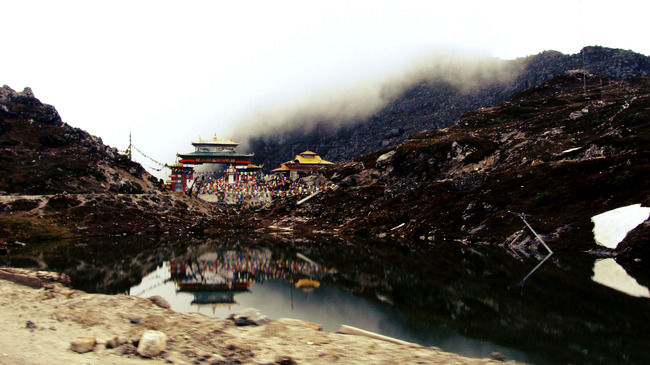 Nestled in the arms of white mountain peaks, a little ahead of Sela is the Jaswantgarh War Memorial. Epitome of bravery and courage, according to legend, a sepoy of the Indian Army named Jaswant Singh fought all alone against the Chinese soldiers and the treacherous weather for three days during the 1962 Sino-Indian War. He was awarded the Maha Vir Chakra for his courage posthumously. This epic route is incomplete without one paying their respects at the war memorial. 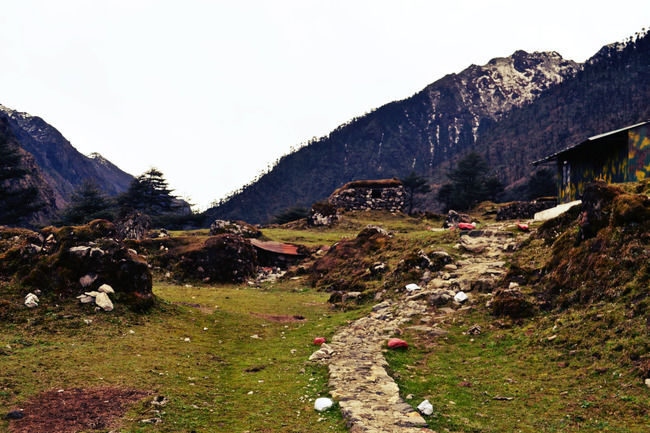 On a clear day, one can see the Tawang monastery, as soon as you move downwards from here. As we drove towards Tawang, the landscape changes drastically, the green meadows were dotted with big hairy yaks and cascading waterfalls along the road.

Closer to Tawang, we could see people from the Monpa tribe along the road. You can differentiate from their distinct attire and their traditional hat made of yak hair. 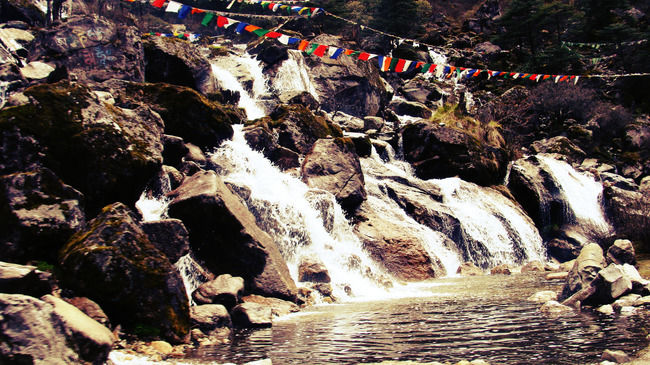 After acclimatizing for a day, which is not enough, we head towards the epic Bumla pass. They say Tawang is the land of 101 lakes. I don’t know if 101 exists today but we crossed at least 4- 5 lakes, of varied sizes and in various states of freeze. The road to Bumla is considered significant since it is from here that the Chinese marched into India during the 1962 Indo- Sino conflict. Bumla pass, situated at the Indo-China border is situated at 16,500 ft above sea level is covered with heavy snow for most part of the year. This pass is also of great historic importance since it is through this pass Dalai Lama entered India while escaping from Tibet. 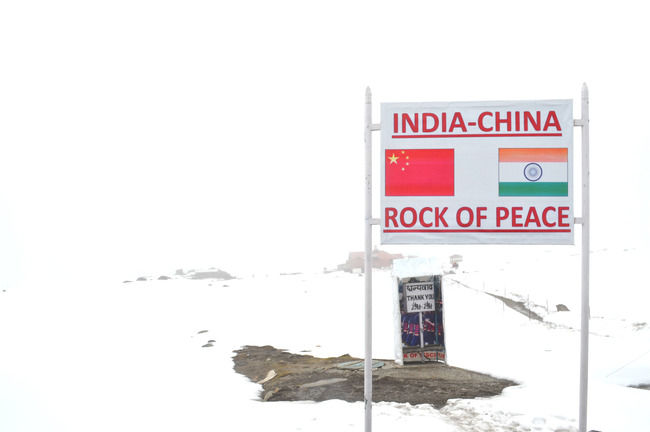 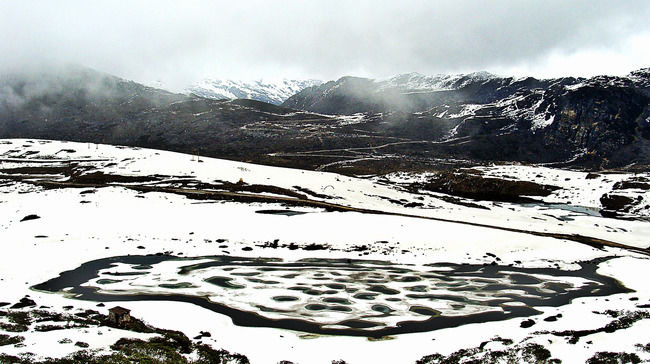 Another 40 kms through the snow covered route and we reach Sangester lake, also known as Madhuri lake since one song from the Bollywood movie Koyla starring Shah Rukh Khan and Madhuri was shot here. Can’t say much about the glamour quotient but with the fog down, and dead trees protruding, it is one of the most breathtakingly and sinister looking lake. 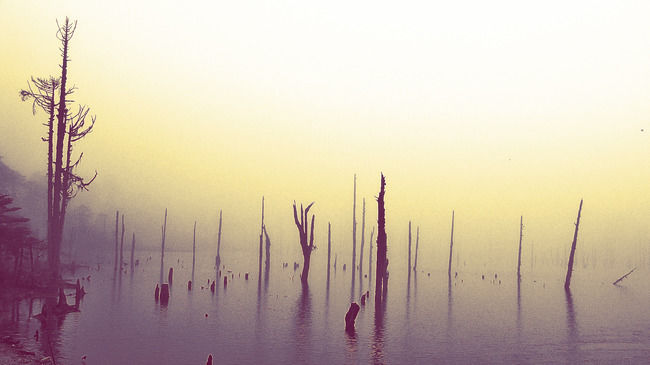 I kept the best for the last. My final day in Tawang and I finally paid homage at the mammothian Tawang monastery. Its sheer size itself can be overwhelming. With a capacity of housing more than 700 monks, it is one of the biggest Buddhist monasteries in the world. The main altar with it’s 27 ft high statue of Lord Buddha streams with pilgrims who come from near and far to seek blessings. The air inside felt heavy with the aroma of incense stick and smell from the burning of the yak butter candle, all together. 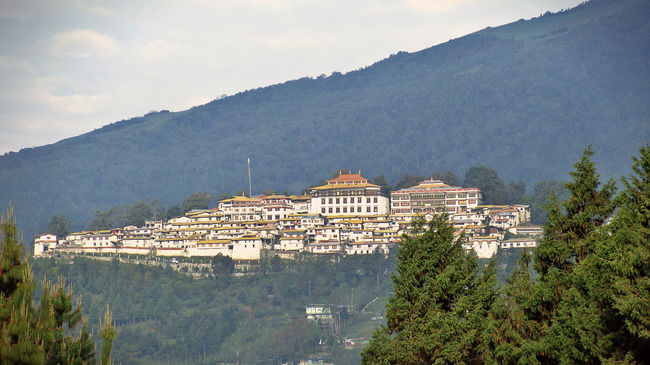 Tawang is also of major religious significance since the 6th Dalai Lama was born here. A small shrine, known as the Urgelling gompa, is built here to venerate this holy ground. On the lawns I finally got a chance to interact with some people of the Monpa tribe. We could only speak the universal language of a smile, but it was evident that they were as curious and intrigued about me as I was about them. 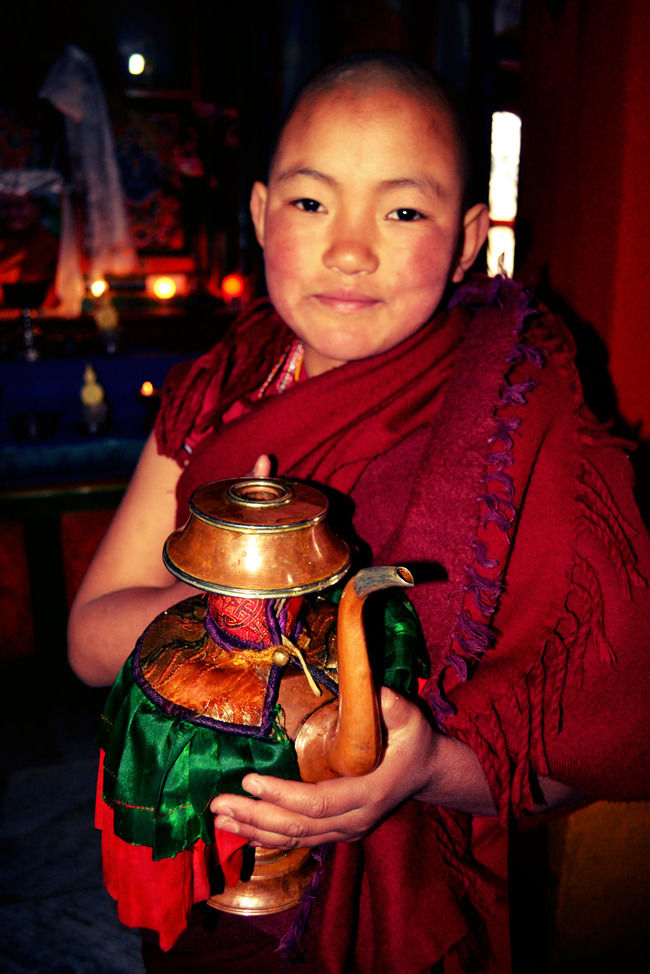 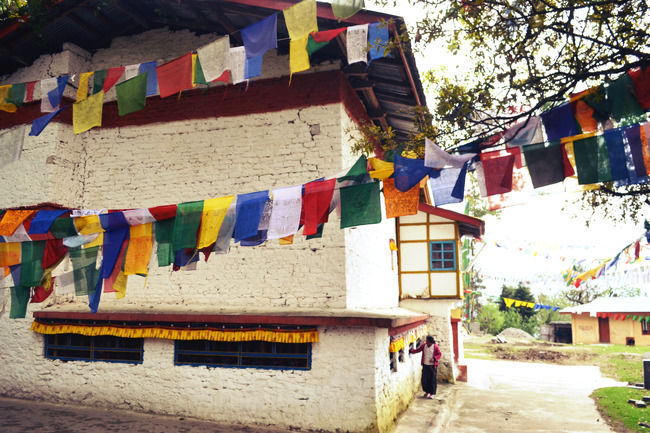 If these weren’t reasons enough for me to pack my bags and explore this mystical land, what more could be! I imagined this place high up in the Himalayas to be completely mangled in conflict; a place torn between religion, politics and nationality. But the reality was nothing near what I had imagined.

The road to Tawang, at least 70% of the total travel, is a nightmare. Absolutely backbreaking with bumpy no-road roads, it made me question if it was worth it. But like they say, “an adventure is never an adventure when it’s happening”. Neither was now. While travelling I cursed myself for this self inflicting pain, but my desire to visit Tawang didn’t die.

As soon as we land in Guwahati, we make a hurried dash for Tezpur. Just as we exit the crowded city and enter the green plains of Assam, our vehicle has a puncture. *Bummer* 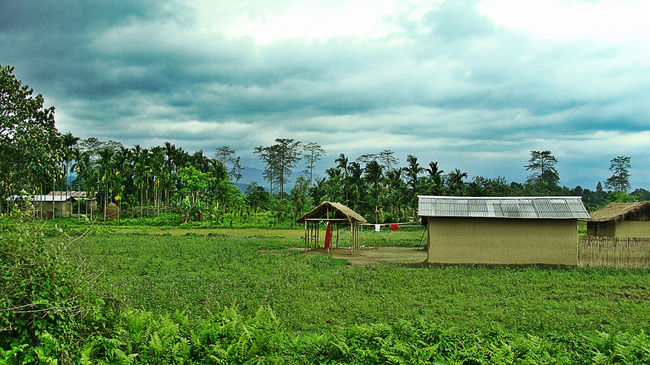 Hot and sultry and in the middle of nowhere, the tourist in me starts to get annoyed but the traveller in me was indeed happy. I got a chance to explore the little hamlets nearby.

Tezpur is the cultural capital of Assam and is located on the banks of the mighty Brahmaputra. A short walk around the city is the best way to explore.

Originally from the Tibeto- Burmese origin, it is amazing to see how this tribe still holds on to their traditions and customs which is in such juxtaposition to their existence in a nearly modern town.

One thing you cannot miss here is the walk across one of the many prayer flag decorated old ‘suspension bridges’. A huge gush of wind and it will set you swaying!

The monastery also has a centre for Buddhist Cultural Studies, a library and a museum with valuable artifacts and manuscripts.

Not far from Tawang monastery is the Thukje Choeling Nunnery. Contrary to my belief that all nuns were serious looking religious beings, here they were absolutely jovial and will insist on you having a cup of butter tea with them. They would be even happier if you sit in the kitchen and give them company while they make the tea. Talk to them, they will love it!

Unlike what I had imagined, Tawang is a peaceful place closely protected by the Indian Army. The Monpas who migrated from Tibet to Tawang, live in their new world cut off, only geographically, from their true homeland but complacent with their farming and beliefs.

While heading back to Guwahati via the same terrible route, I was lost reminiscing on the marvels I had recently experienced. But this time the roads didn’t hurt so much. Like Bob Marley said, “Though the road's been rocky it sure feels good to me.”

There is only one route to Tawang, starting from Guwahati-> Tezpur-> enter Arunachal Pradesh via Bhalukpong-> Tenga Valley-> Bomdila-> Dirang-> Sela Pass-> Jaswantgarh-> Tawang. It totally depends on where you want to make a stop-over. Most of the people who have been to Tawang make a night halt at either Bhalukpong, Bomdila or Dirang.

Inner Line Permit is required to enter Tawang. This can be obtained from offices in various cities. For more information, log on to http://tawang.nic.in/reach.html

A special permit is required to visit Bum La Pass. The Permits can be requested at the Office of the Deputy Commissioner in Tawang District.

Acute Mountain Sickness (AMS) is common. You can combat it with either taking a 2- 3 days to acclimatize or take a Diamox tablet before entering Tawang.

Also do get your BP checked from time to time.