Fort Gorakhgad is quite small in size. It was had strategic importance during the reign of Shahaji Raje. However, no major battle is recorded to have taken place here. It was used in Shivaji’s era to patrol the nearby region and was used as a stopover station during the journey to Junnar via Naneghat. Though small in size, there is enough availability water and a lot of space for accommodation. The fort gets its name from Saint Gorakhnath, who performed his “Sadhana” in this place. 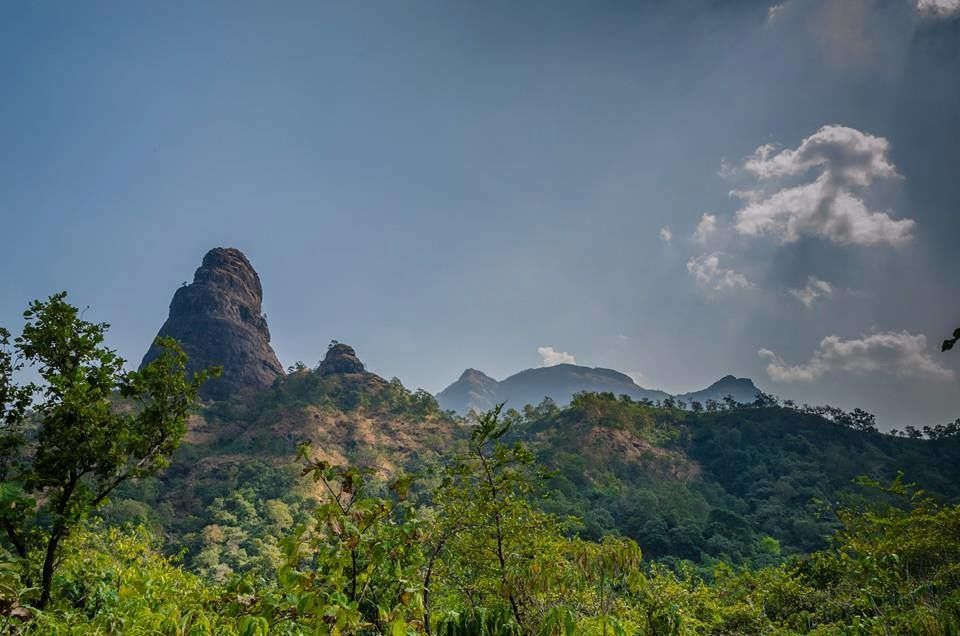 Gorakhgad view from base village.

Enchanting forests, hidden waterfalls and caves – these make up the trail to Gorakhgad peak. The magic doubles during monsoon, where you’ll see the most vivid shades of green around you.

The twin peaks of Gorakhgad and Machhindragad stand tall over the trail, providing a surreal setting to the trek. The 360 degree view from Gorakhgad top, of the vast Sahyadri ranges of Naneghat-Dhakoba to the east, Ahupe ghat to the south and Siddhagad to the south-west, is hauntingly beautiful.

During monsoon season, the trail takes on a whole new appearance. While there, take a moment to observe, listen and smell and you will feel the forest come alive around you. The view of the numerous cascading waterfalls and a large range of wildflowers only add to its charm.

The base camp of the trek, Dehri, is three hours away from Mumbai. The trek starts from the temple situated at the road-head going from Dehri to Murbad. The entire trek can be done in 4-5 hours.

The path to the top of the fort plateaus out twice before reaching the cave. The final climb to the pinnacle involves a steep rock patch that leads to a small temple. The trek offers a perfect getaway for the city dwellers and the pleasant monsoon showers only add to the rich experience.

One can reach the base via different modes of transport. Directly reaching base by private vehicles. But the most common way and the cheapest was to reach the base from Mumbai is using the public transport.

There is Kalyan S.T. Bus Depot, just opposite to the Kalyan Station. From there one can board the bus to Murbad (last bus at 11:30 PM). It takes approximately an hour to reach Murbad Bus Depot, and the route is quite smooth. From there one has to board another bus to Dehri Village. The road is not at all smooth, it’s very rough. Going to Dehri by local S.T. Bus is similar to a roller coaster ride. The road is quite small and full of trees on both side especially thorny trees, so be careful if you are sitting on the window seat with windows open.

The route to Gorakhgad starts from behind the temple. The path climbs gently from the temple. 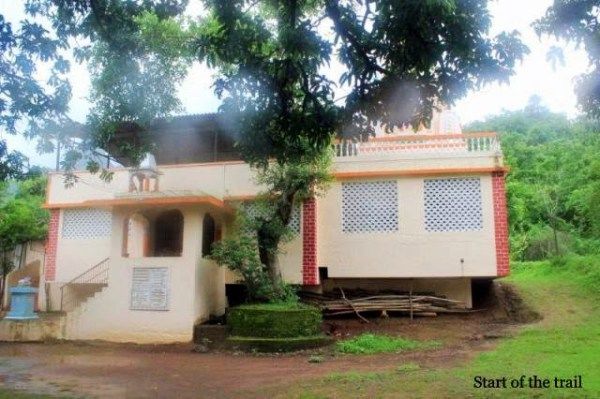 Start of the trail behind the temple.

Then there is a small hill which needs to be crossed first. This small hill is very simple, as easy as walk in a garden. The entire surrounding is lush green during the monsoon. At times, it becomes too narrow and is partly rocky and muddy, making it problematic to walk in the monsoon. You will be surrounded by thick vegetation during the climb. In monsoon walk from such narrow route with both side surrounded, fells like walking through a field full of long grasses. Other than monsoon, the route looks like a walk from a deciduous forest. Watch out for thorny bushes in this part of the trek. The climb is gentle with thick forests blocking most of the natural light. This section is muddy and there are sections that are water-logged during monsoons and you need to walk along the side of the trail holding the bushes.

Then the most difficult part of the trek starts, the climb of 50 degree rock patch through rocky stairs. The rocky stairs are not proper. The width of the stairs may not even be equal to the length of your legs, so it is difficult to get proper balance on these rocky stairs. Some of the steps are broken. 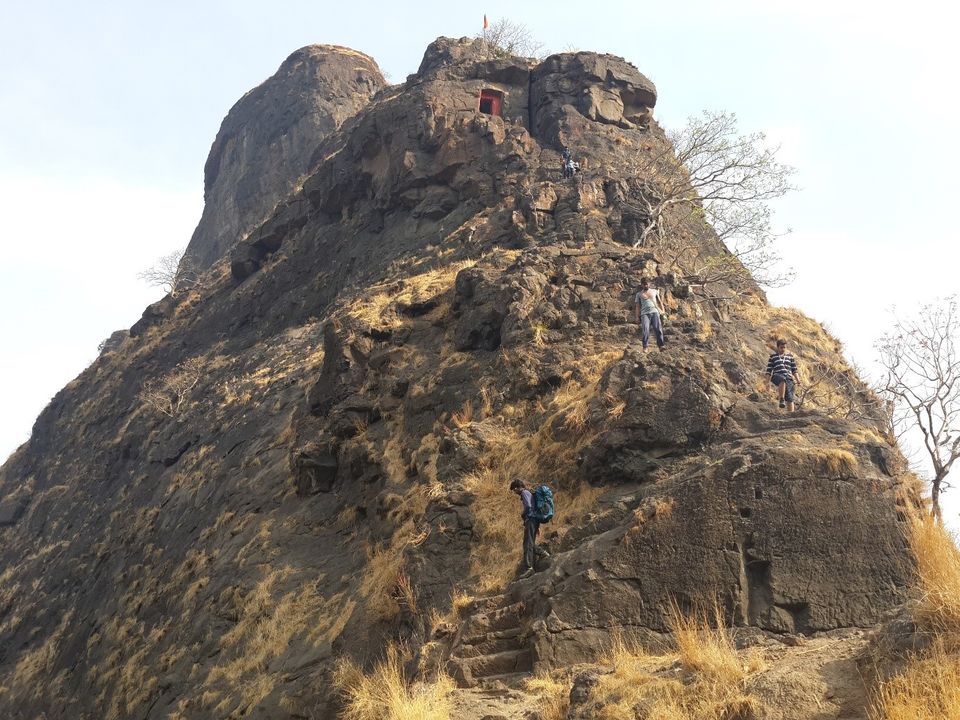 Gradually the degree of the steps tends to 90 degree. You need the support of your hands to climb this almost 90 degree staircase. There is an orange entrance (which can be seen in the above image) to the fort. After entering the door and climbing 5-6 rocky steps, one reaches the first plateau.

After the plateau, again the rocky steps are there. These steps are quite easy to climb but are difficult to get down. After climbing this part, then comes the second plateau. This is just 10 mins below the summit point. And from here one can see the whole range of Sahyadri ranges.

Just little away from the second plateau, there are multiple cave which are combines into a single cave, which may accommodate 50 or more people. This cave is used for resting and sleeping by people who trek at night. The night trekkers sleep here and then climb to the peak early morning to watch the sunrise. Just in front of the cave, one can see the deadly pinnacle of Machinndra. 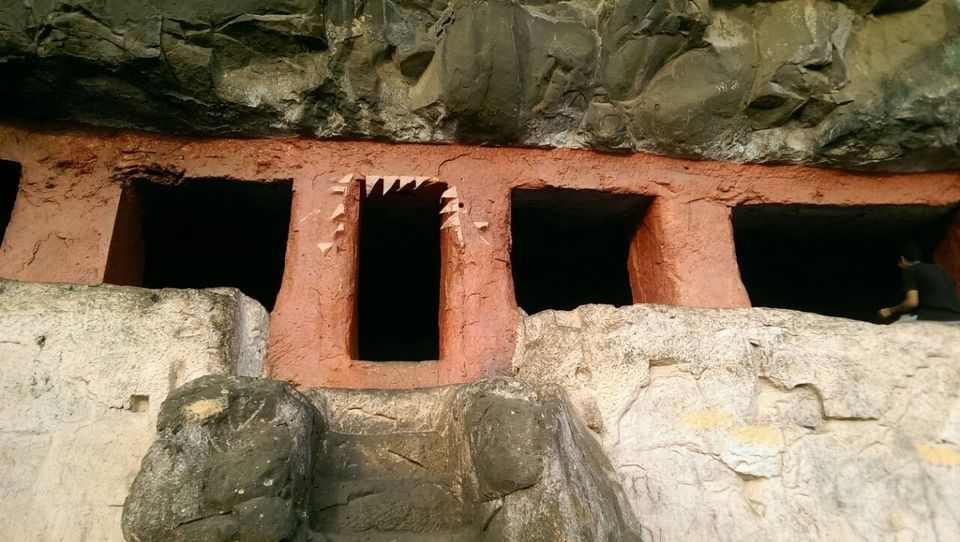 View of the cave

Panoramic view from the cave

From the caving, walking ahead and crossing 3 ponds full of water, one reaches the back of the fort. From here one can see a flight of steps carved in the rock. The look of it is quite deadly as these steps are about 2ft in size and there is total exposure on one side. To reach the steps one has do some free climbing over a rock-patch of about 8ft and then move on cautiously on the steps. The steps move on and at one point it takes a sharp U-turn. At this point has to be extremely careful to climb on and reach the top of the hill.

Once you get to the top of the hill, spot a temple dedicated to Lord Shiva. From here, you get to see 360 degree view of several Sahyadri ranges around you, even as winds blow fiercely.

Panoramic view from the top of Gorakhgad Fort 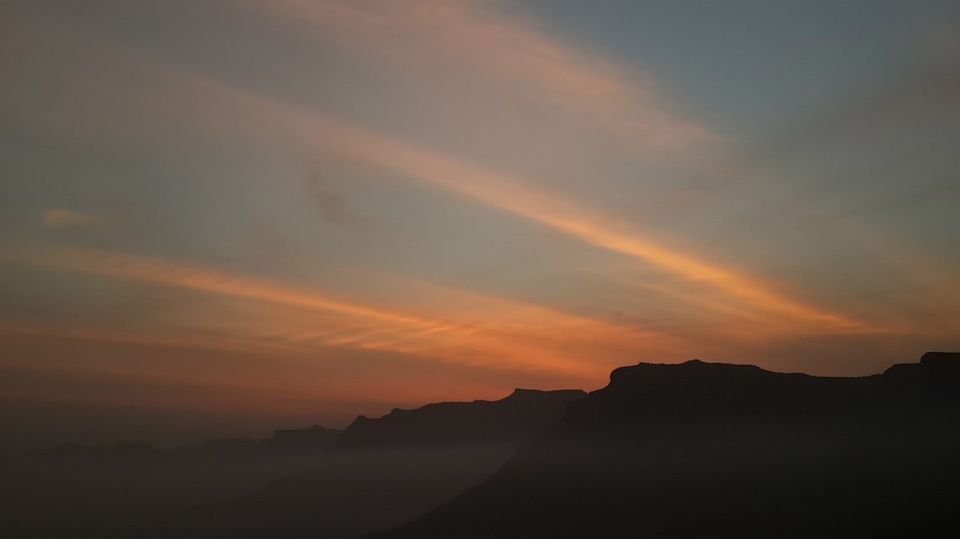 Sahyadri ranges view from the top while sunrise. 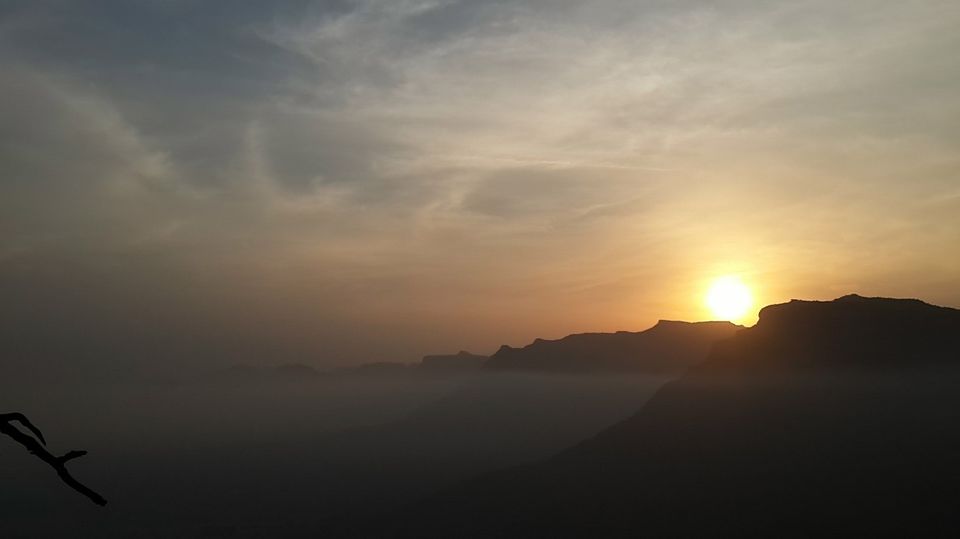 Another Sahyadri Ranges view from top while sunrise.

To return, retrace the same route taken to reach the top. Climbing down is tricky. During the rainy season and should be done with extreme caution and patience.

While climbing down, there are few patches which looks straight and then take an extreme left of right. If one forgets the route and comes to this point then he will think it is a dead end as one would see the valley in from of him.  And looks quite dangerous too. 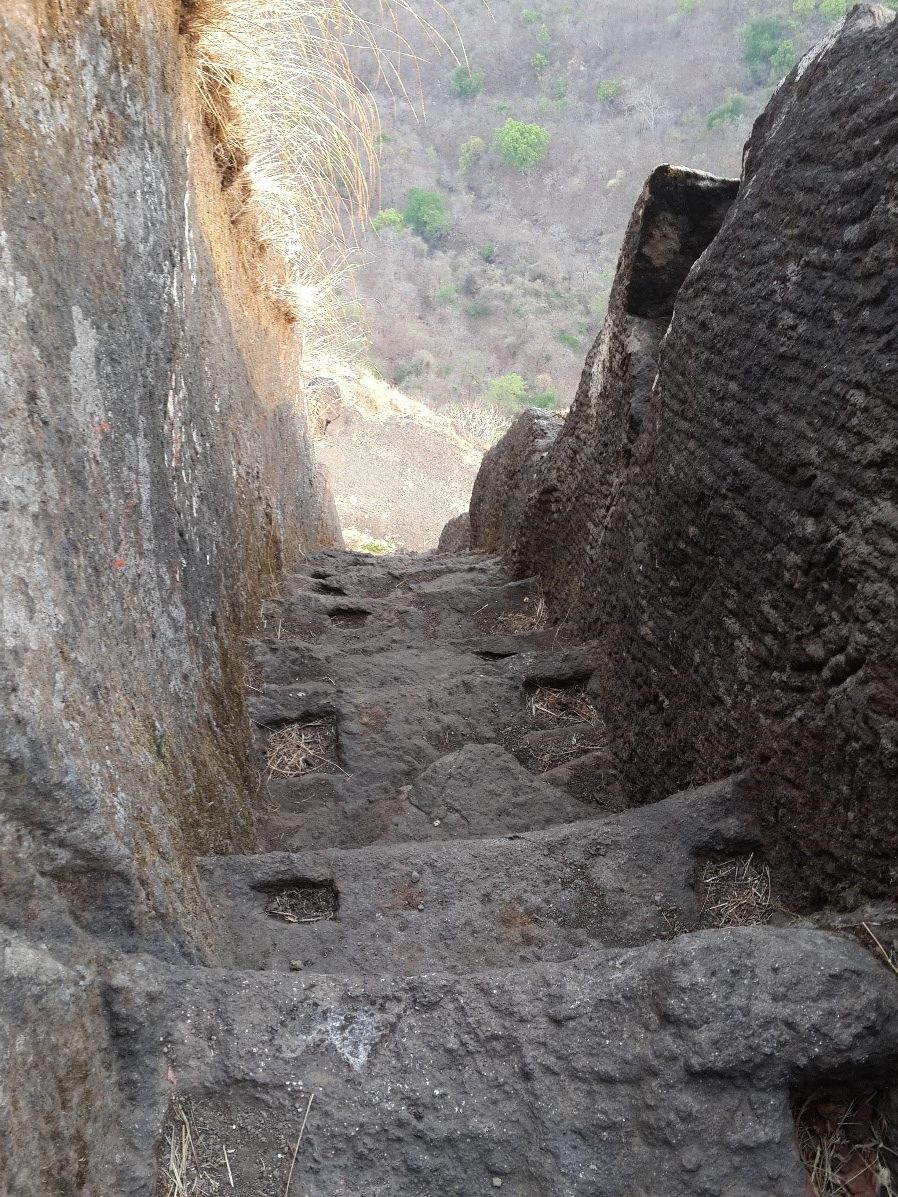 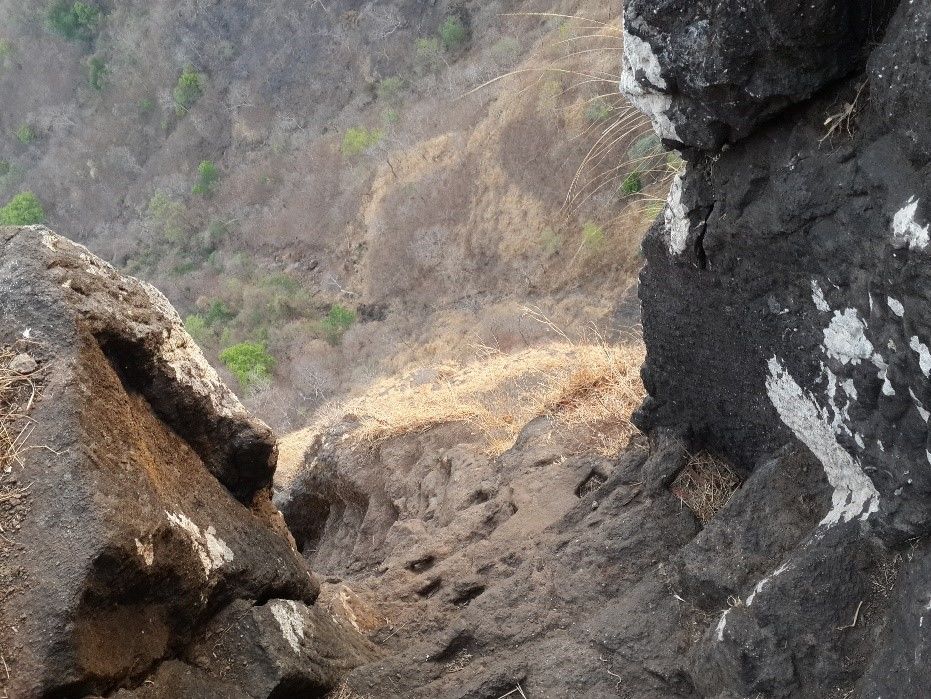 Getting down is the most difficult part of this trek, which needs to be done with at most care and patience.