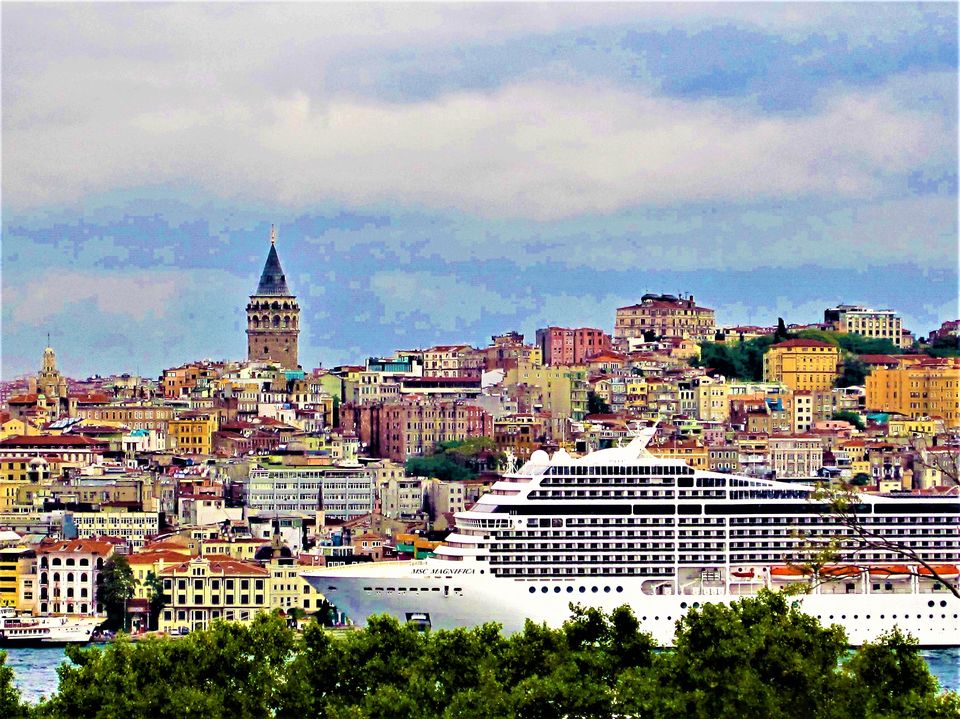 We spent a few days staying in Sultanahmet, the cultural centre of Istanbul. Our accomodation of choice, The Metropolis Hostel had a roof terrace and overlooked the Bosphorus Sea. The room was fine apart from the fact that it was situated adjacent to a metal stairway leading to the roof terrace. Consequently, it was a somewhat noisy at night as guests stomped up and down the stairs! However, it was in a pleasant leafy area of Istanbul, only a five-minute walk from the Blue Mosque, Topkapi Palace and Hagia Sophia.

We visited the aforementioned attractions, enjoying the magnificent history and stunning Ottoman architecture. Of course, we had to check out a few of the rooftop bars for research purposes, most of which had glorious views of Sultanahmet. The Grand Bazaar was a confusing labyrinth, where everything from ornate lamps to gold chains could be purchased and the Spice Market was piled high with aromatic spices, perfumes, oils, nougat, honey and Turkish delight.

We enjoyed a visit to the Cistern, an atmospheric underground reservoir surrounded by Roman pillars and we took a ferry ride on the Bosphorus Sea. Crossing the Galata Bridge, we took advantage of 'Free Thursday' to visit the Istanbul Museum of Modern Art. It was a cool contemporary space full of striking artwork. In Taksim Square, the heart of Istanbul, we perused sweet shops brimming with hundreds of varieties of Turkish delight.

Our favourite Turkish snack was the simit, a sesame encrusted bread ring sold by street vendors. Turkish food was a revelation - mezes consisting of freshly baked Turkish bread accompanied by dips such as tzatziki, hummus and haydari, along with marinated vegetables. Furthermore, we can't overlook mentioning the pot kebabs, where the pot has to be smashed to release the contents of the meal. For dessert, it was difficult to resist deliciously sticky baklava.

A night out in Sultanahmet involved the amazing feats of a whirling dervish followed by a hangover from hell the following morning - Turkish wine was surprisingly good!

After a few days in Istanbul, it was time to make tracks to Cappadocia. A mini-bus picked us up at our hotel and took us to the biggest bus station we had ever seen. It was virtually a town on several levels. A confusion of buses headed to and from destinations all over Turkey, Bulgaria, Greece, Romania and the Balkans. There were one hundred and sixty-eight ticket offices and gates, a metro station, shops, restaurants, a police station, a clinic and a mosque! Thankfully, the mini-bus dropped us off adjacent to our bus, so we didn't have to try and locate it ourselves!

The Road to Cappadocia

We had wanted to go to Cappadocia for many years, having seen photographs of the weird and wonderful landscapes. At last we were on our way! The journey would take about twelve hours on the overnight bus. We made a couple of stops during the night at garishly decorated shops which were full to the brim of sweet treats and nuts. Unfortunately, the stench of the toilets overwhelmed the sweet aroma of candy!

As the sun came up, there were hints of the spectacular landscape to come. Arriving in Goreme is like being transported to another world! The town and its surrounding area is like a wondrous fantasy land. You expect to see elves wandering the streets, instead of humans! Houses, churches and more recently hotels, are burrowed into the bizarre rock formations creating a wondrous scene.

We checked into our cave hotel. The bed was carved out of the ground and the shelves carved into the wall. Unlike some cave rooms which are apparently rather luxurious, it was pretty basic, but it was our home for the next week or so.

We walked up the nearby hill and looked out over the valley of Goreme - it was an extraordinary sight. Hot air ballooning is the thing to do for those who can afford it, and its easy to understand why. Cappadocia must be one of the most spectacular places in the word to take a balloon ride.

On our right, we looked down upon a group of phallic-like rock formations, and a little further on we came across a massive chasm in the ground. It seemed that in this unreal landscape, you never knew what you were going to come across.

As T started descent of a very steep slope, she slipped on the gravelly surface and slid at full speed down the slope coming to an abrupt halt when she collided with a tree! She was in the process of warning me to be careful, when I too tumbled, and took the same route crashing into the tree at the foot of the slope! It was a funny moment and not unlike the memorable scene in 'Romancing the Stone'.

We had a fantastic week in Cappadocia. We went to Goreme Open Air Museum which is an area with a dense concentration of cave churches and dwellings built into the stone cliffs and rocks. Every day we hiked through the surreal and astonishing scenery. Sometimes we sat in a cave simply looking out at the Dali-esque landscape, listening to the muezzins call to prayer reverberating through the valley.

We walked to nearby villages, through valleys packed with eroded rocks which resembled mushrooms, chimneys and pointed witch hats. A stunning scenario awaited us at every twist and turn. We wandered at will, unrestricted, and saw very few people.

Back in town, we smoked shisha pipes, drank wine and watched the sun go down over the fairy chimneys. Cappadocia is a very special place which will remain in our hearts forever 💙