The traditional blends with the modern…to enchant the tourists!

Beginning with Gadisagar lake, a man-made reservoir built by Raja Rawal Jaisal to meet the need for water of this desert city. What would once have been crystal clear waters used for drinking are now green and dirty as is the area around the lake but despite the negligence what stood out were the artistically carved structures, beginning with the magnificent entrance, the delicately carved chhatris, the shrines and temples standing in bowed reverence around the lake! Every sight we visit makes us marvel at the foresight, vision and aesthetics of the rulers who left such legacies, for generations to benefit!

Our next stop was the famed golden fort or the Sonar Quila made famous by the movie of the same name by Satyajit Ray, and the magnificent buildings in yellow sandstone do full justice to the sobriquet Golden City which Jaisalmer is fondly known by! And what treasures it held, each more breathtaking than the other! The buildings come alive with the anecdotes and folklores which our guide weaves expertly into the rich history of the place, the pride and love for Jaisalmer evidenced in every word he speaks! But more than any history what impacted me the most, and what comes to mind when I talk of Jaisalmer is the most intricate carving in stone, which adorns the temples, palace, residences, peeps down from jharokhas, archways and havelis…it’s as if an army of craftsmen had descended on the city and transformed it in their obsession! Time stands still as I lovingly glide my fingers on the fine workmanship, wondering how many days would they have worked in the extreme heat of the desert and what passion must have driven them to produce such work! It’s not the gold and silver in the statues in the temples but the sheer workmanship which compels me to linger and makes me come back for a second visit the next day.

The only building which I remember for its history is the Sation Ka Pagothia, the place where ladies would walk into the flames in the most celebrated and terrifying of all customs, the Jauhar when it was evident that the battle has been lost. It was not with grief, but with a sense of pride that our guide, a proud Rajput recounted that it was twice that Jauhar had been performed there. It leaves me shaken, to say the least, and I wonder how the gods in the numerous temples around could sit unmoved, impervious to the shrieks and screams as the very ladies who had revered them are engulfed by the flames, one after the other!

The walls still black from the fire which claimed its victims are a mute witness to what happened within their precincts!

The image stays even as I try to shake it off, trying to keep in step with our guide who expertly guides us through the narrow lanes and by lanes, which are so narrow that its difficult for two people coming from opposite directions to make their way through but which in typical Indian way are made full use of, with people displaying their wares, stray cattle and dogs lounging around or children and residents relaxing outside their homes, even as the tourists manoeuvre through this all and try to soak in the history of the place, and the sheer beauty of the buildings!

And in between all the history, he introduces us to interesting people, some originally from there but others like the Bengali babu with a penchant for collecting exotic stones who got drawn to this place after watching Satyajit Ray’s Sonar Quila, and has a shop tucked away in the Fort with the most amazing collection of stones and artefacts. Here we buy a glass made of yellow sandstone, keeping water overnight in which is supposed to have medicinal properties. Then there are miniature artists like Kamal Goswami, and his brother, originally from Bikaner, but now settled here,… who find peace to pursue their art in the shops they have so beautifully kept with their amazing paintings on display.

History merges with the everyday lives of the people living and eking out their living in the Fort as it lives and breathes, its temples thronged by devotees, be it the famous Jain temples or the Laxmi Narayan or Shiva temples. And even in these temples my head bows in reverence to the flawless execution of the images, sheer poetry in stone!

From temples to the private Haveli, four storeys high done up and maintained as a museum to give a feel of those times, and charging a paltry sum from visitors for its upkeep, but which is magnanimously waved off for us, being from the army. Small little rooms, but with adequate ventilation, beautifully carved niches and wooden doors, and the colourful display of pagris, clothes, pots and pans, old cameras, old photographs…truly a treasure cove and I loved everything about it! The owner, lounging outside is observant enough to comment that we are unlike the other local tourists who finish the tour in no time, and then pointing to the hanging wires outside the Haveli laments the apathy of the government which had done nothing to spruce up the place! The tour winds up with steaming cups of sweetened tea, where we are joined by a scholar in Vedic studies with whom we have an interesting exchange on religion.

Lunch is in one of the luxury hotels done up ostentatiously, to give tourists a feel of royalty, for this is what they expect in Rajasthan, and the thriving hospitality industry is quick enough to pander to their every whim! A relaxed lunch, short rest and the evening are booked for the puppet show, one of the must-dos, as told to us. And Mr N K Sharma, the man behind the show turns out to be a walking encyclopedia on Jaisalmer, and a true patron of its dying art, the puppet show, which he runs singlehandedly, with no support whatsoever. A retired history teacher, he has authored almost 40 books on the history, art and culture of Jaisalmer travelling extensively to remote places to collect information to authenticate his work. And all the earnings from his books, writing articles for papers and magazines goes in purchasing traditional arts and crafts for the museum which he started with Rs 300 given by a German lady to start his collection.

The puppet show is well attended by the tourists but at the end of it, I feel that so much more could have been done to upgrade the show if the tourism or the cultural department had shown any interest. While there are places of tourist interest to visit in the mornings, there’s nothing much to do in the evenings, no shopping arcades, no shows except those privately organized by the hotels.

One place which lived up its reputation, in fact far exceeded it was the Patwaon Ki Havelis, a set of five havelis adjacent to each other, which was on our next day itinerary. As intricate as the silver and gold threads they would deal in, the Havelis of the Patwas have no match when it comes to the intricacy of the stonework, not just confined to the façade, the latticed windows, archways, the famous jharokhas… but evidenced everywhere in the buildings. I fell in love with the ornate niches to keep lamps, small wooden doors so beautifully carved, the wall paintings whose colours have withstood the ravages of time, the ornate ceilings and the efforts of the private person who has put in efforts to restore and furnish one of the havelis to give a feel of those times! I love the concept of the central courtyard where all functions must have taken place, which ensures adequate ventilation and natural light in those small little rooms built to keep them cool in summers and warm in winters.

You can almost imagine the brothers who were successful businessmen, bankers, opium exporters, revenue contractors finalizing the deals in these opulent havelis, in those times when Jaisalmer was an important trade centre through which caravans of camels would pass carrying opium, silk, indigo, ivory and other valuable items. Undisturbed by conflicts and wars, Jaisalmer attracted Jains and Palliwals from the surrounding war-prone areas who came to the city with their wealth and being affluent undertook the building of mansions, temples, palaces and lakes. But this golden period would soon end with the discovery of the sea route during the British times and internal strifes ensured that all its merchants deserted this beautiful city to make their home in greener pastures.

As Jaisalmer lost its importance as a trading centre, the city fell into bad times and its population shrunk to just 4,000. Ironically the city got a new lease of life during the wars of 1965 and 1971, and the unscheduled visit of Mrs Indira Gandhi who expressed her displeasure over the neglect of this historic town, its Fort and Havelis.

The legendary Battle of Longewala comes alive in the Light and Sound Show at the War Museum situated just 10kms short of Jaisalmer, conceptualized to display India’s rich military history and showcase real war efforts as they happened in the past. I almost get goosebumps when the accounts of the battle are narrated in the baritone voice of Kabir Bedi. It was on a bitterly cold night of 4th December that Maj Chandpuri with a Company of 120 Sikh soldiers with their sheer determination could hold off the attack by 2,000 strong Pakistani army along with 40 tanks till the Indian Air Force flew in with the first rays of the sun to give them air support! The courage, valour, the never say die spirit of Maj Chandpuri and his men has gone down in the annals of military history and will motivate generations to come!

Yes, Jaisalmer has a lot to offer… The vision of the kings, stellar execution by the gifted craftsmen, the stories of the bygone era, the performance and enterprise of the artists and the locals! But my connection with the place leaves me restless because what I also see is the government apathy- the lack of basic cleanliness, absence of professional guides, light and sound shows, shopping arcades…. We lament at the dearth of opportunities, and there was a veritable gold mine, just waiting for the right model of development which would keep alive its legacies, and enhance their beauty with pleasing infrastructure…Probably that is what the old-timers like Mr Sharma would love to see, and are trying to work towards, with their never say die spirit, and their limited capabilities and resources!

A blend of the traditional and the modern 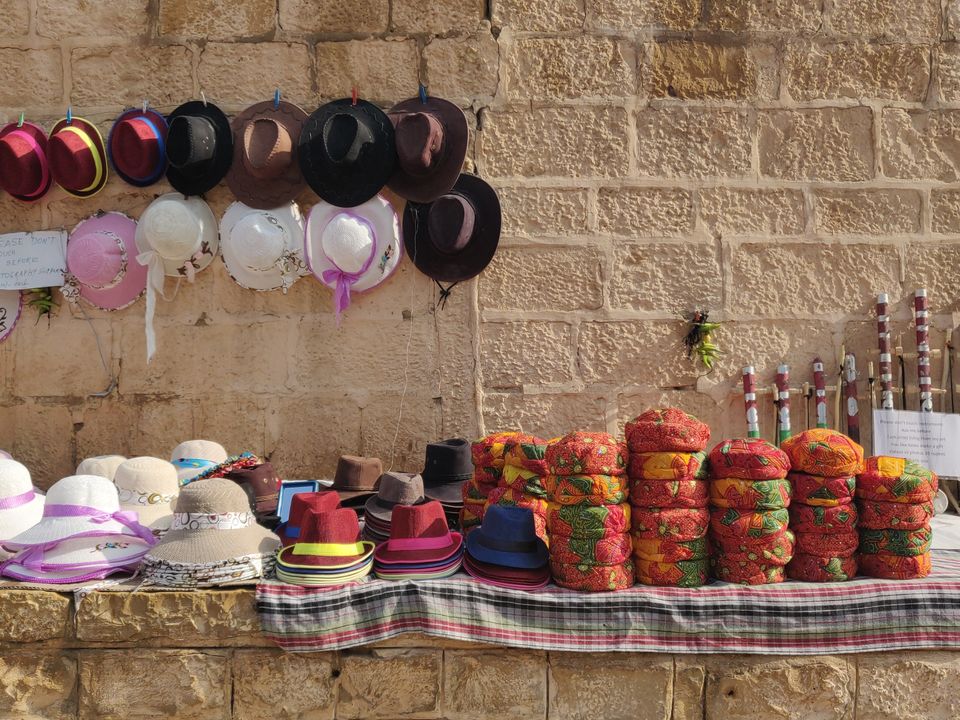 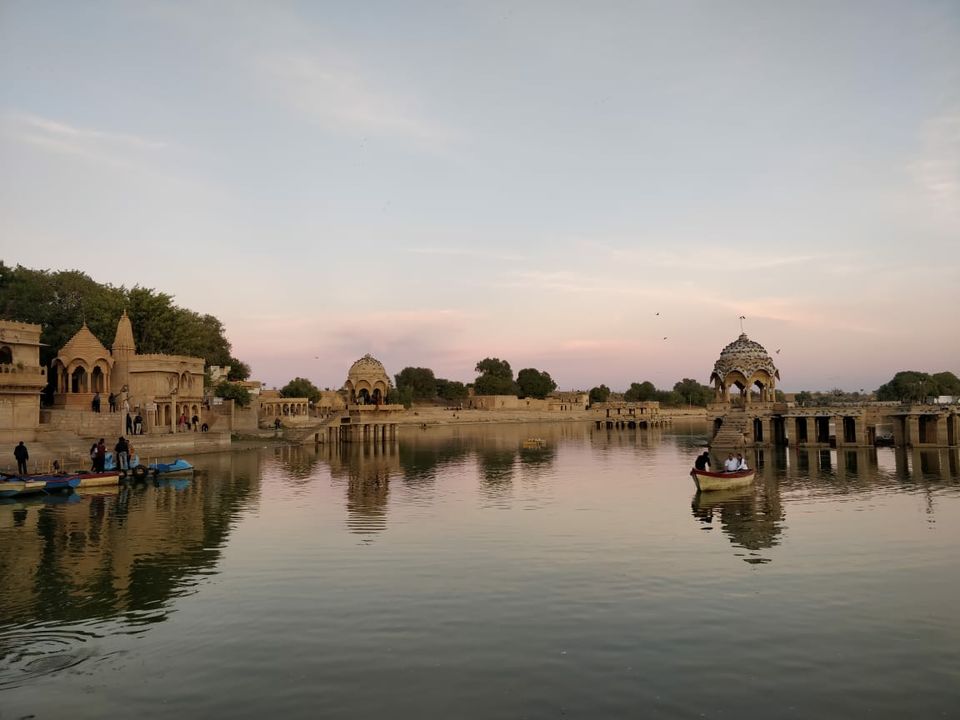 Carved from floor to the cielings....the famous Jain temples 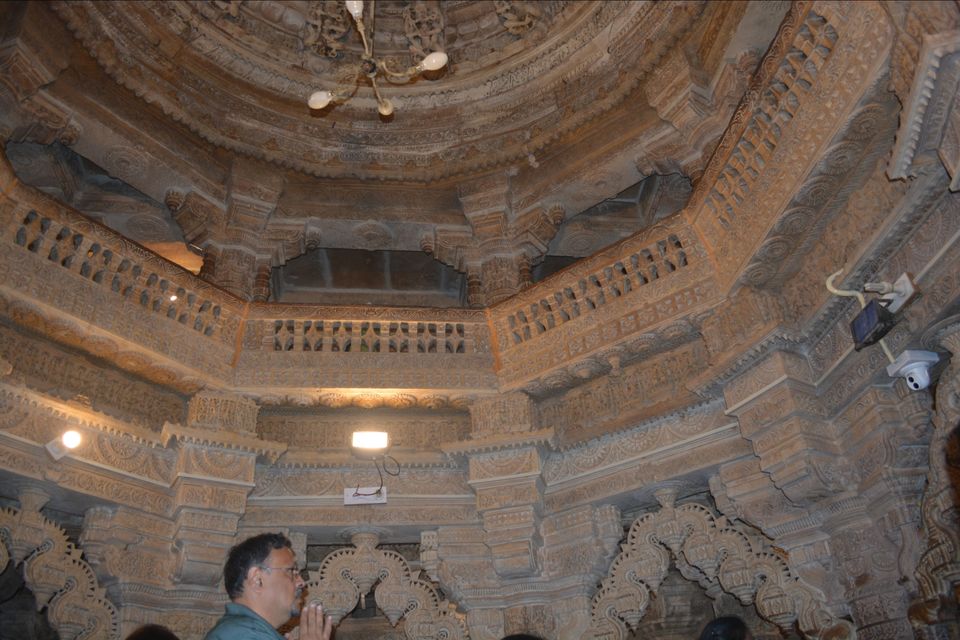 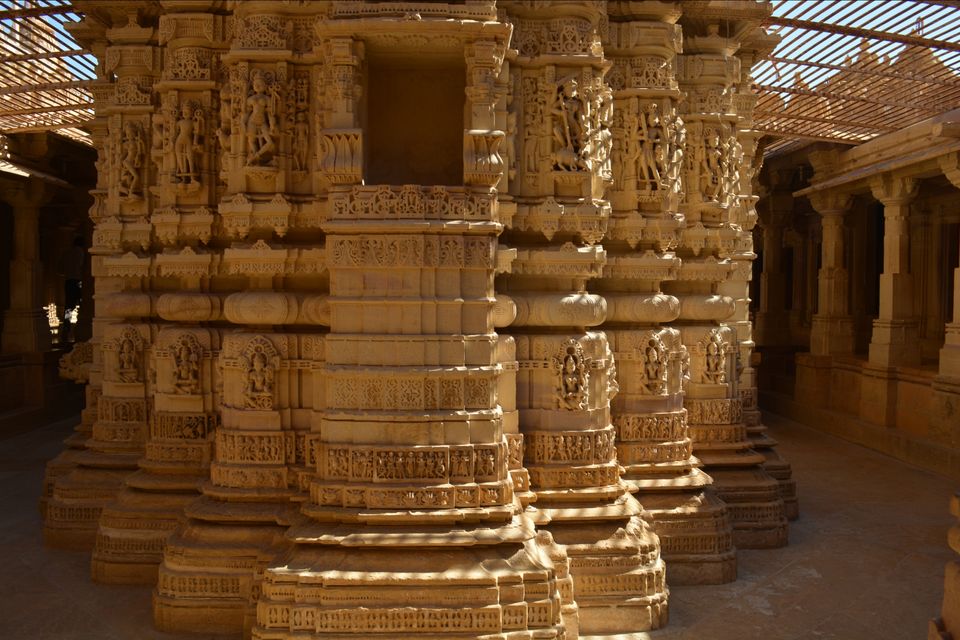 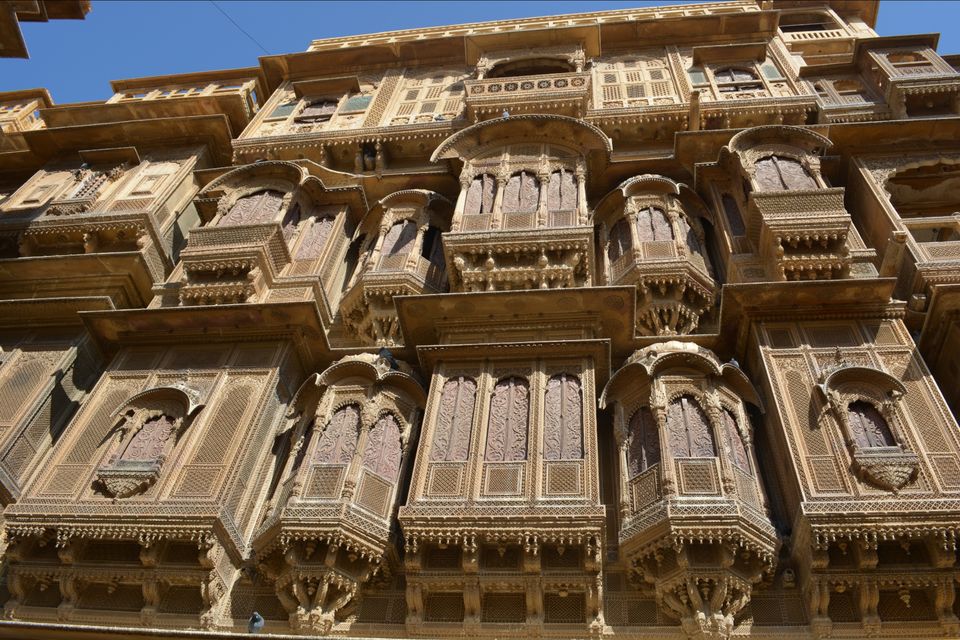 The interiors of the restored haveli 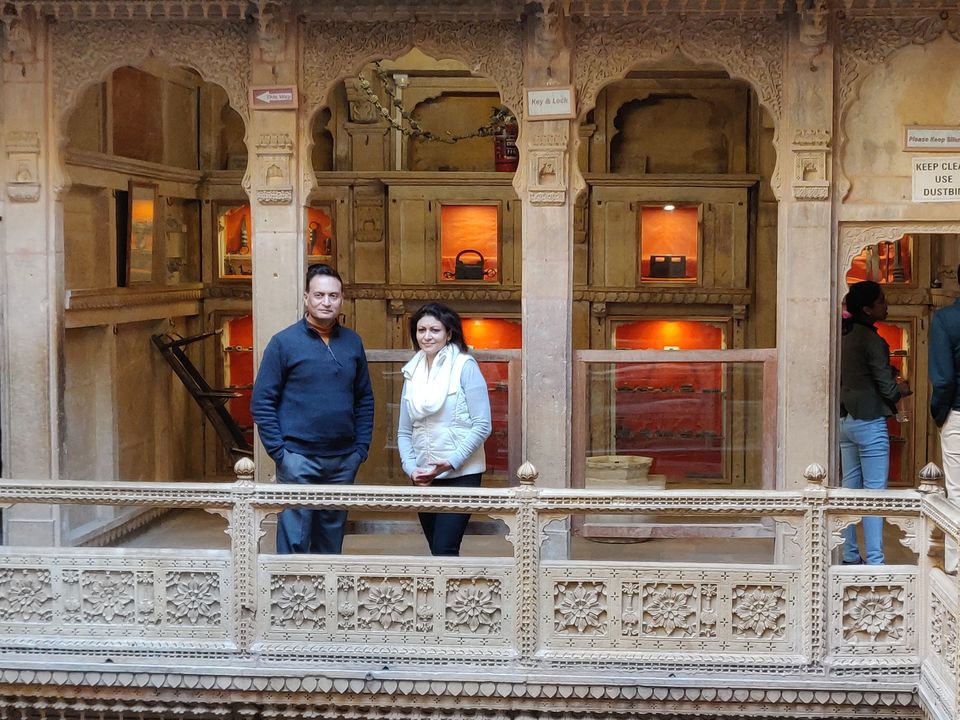 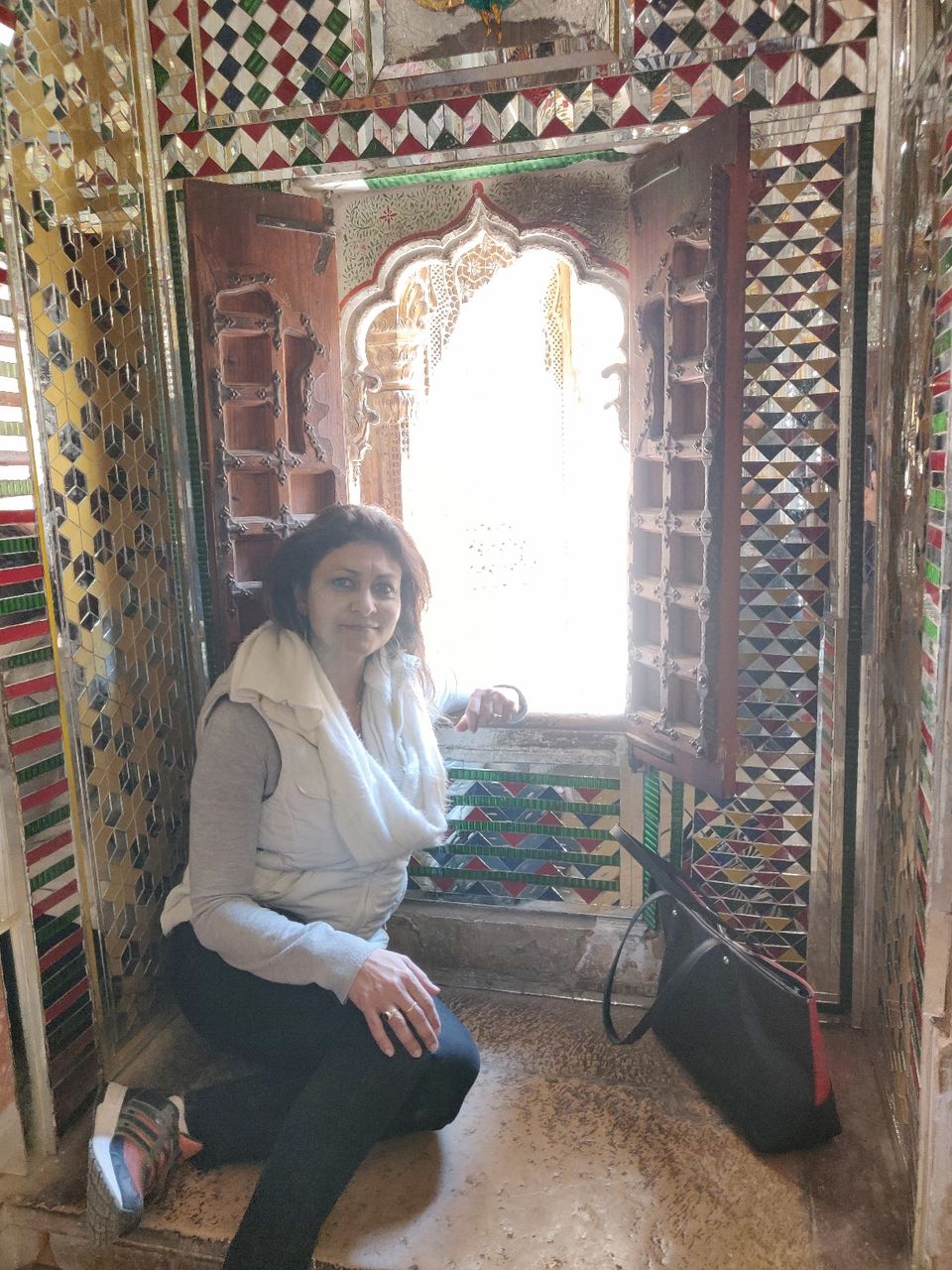 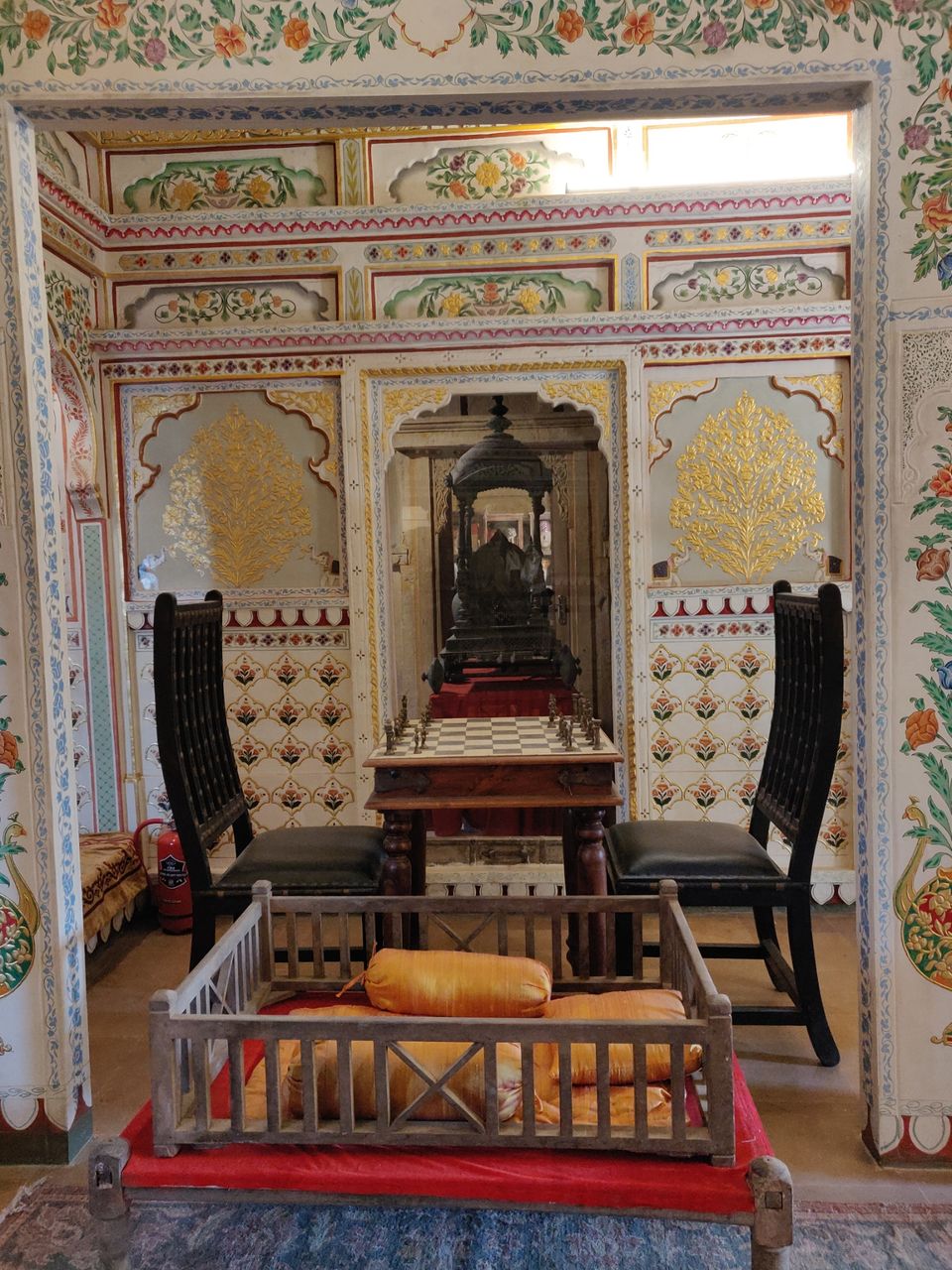 A feel of those times! 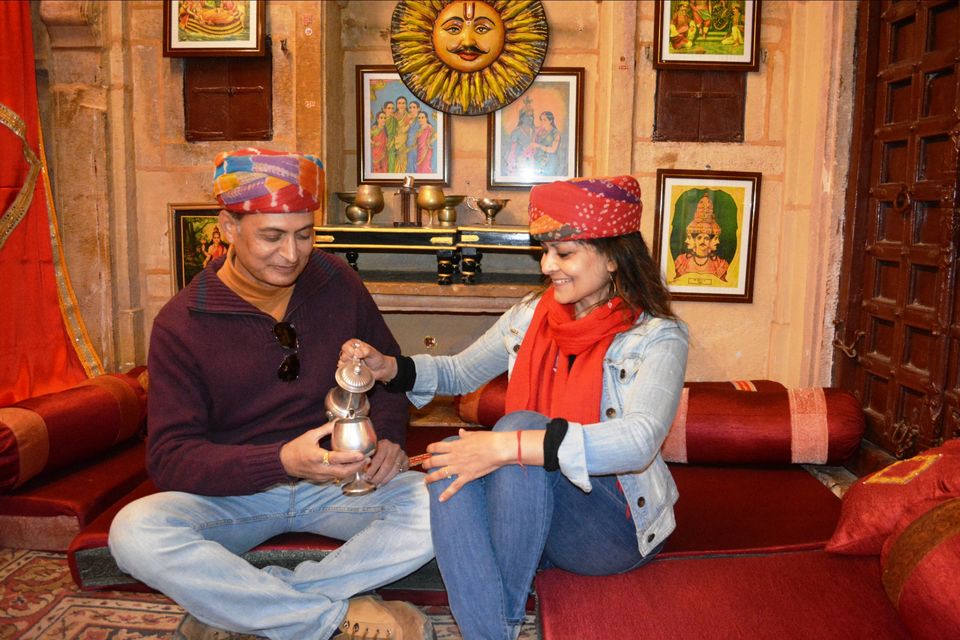 The colorful pagris on display 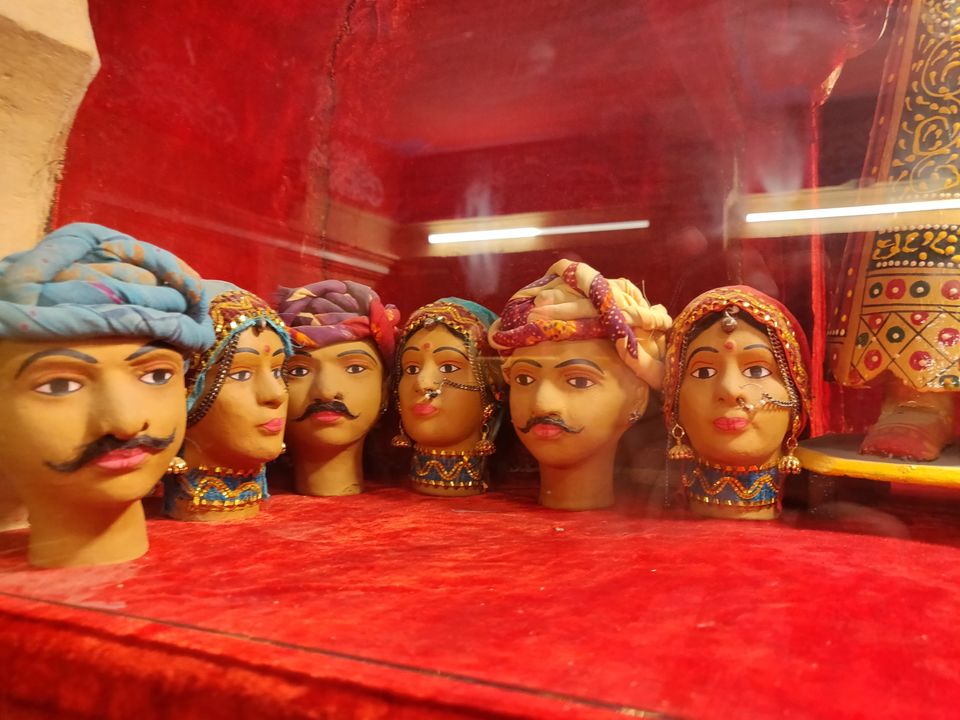 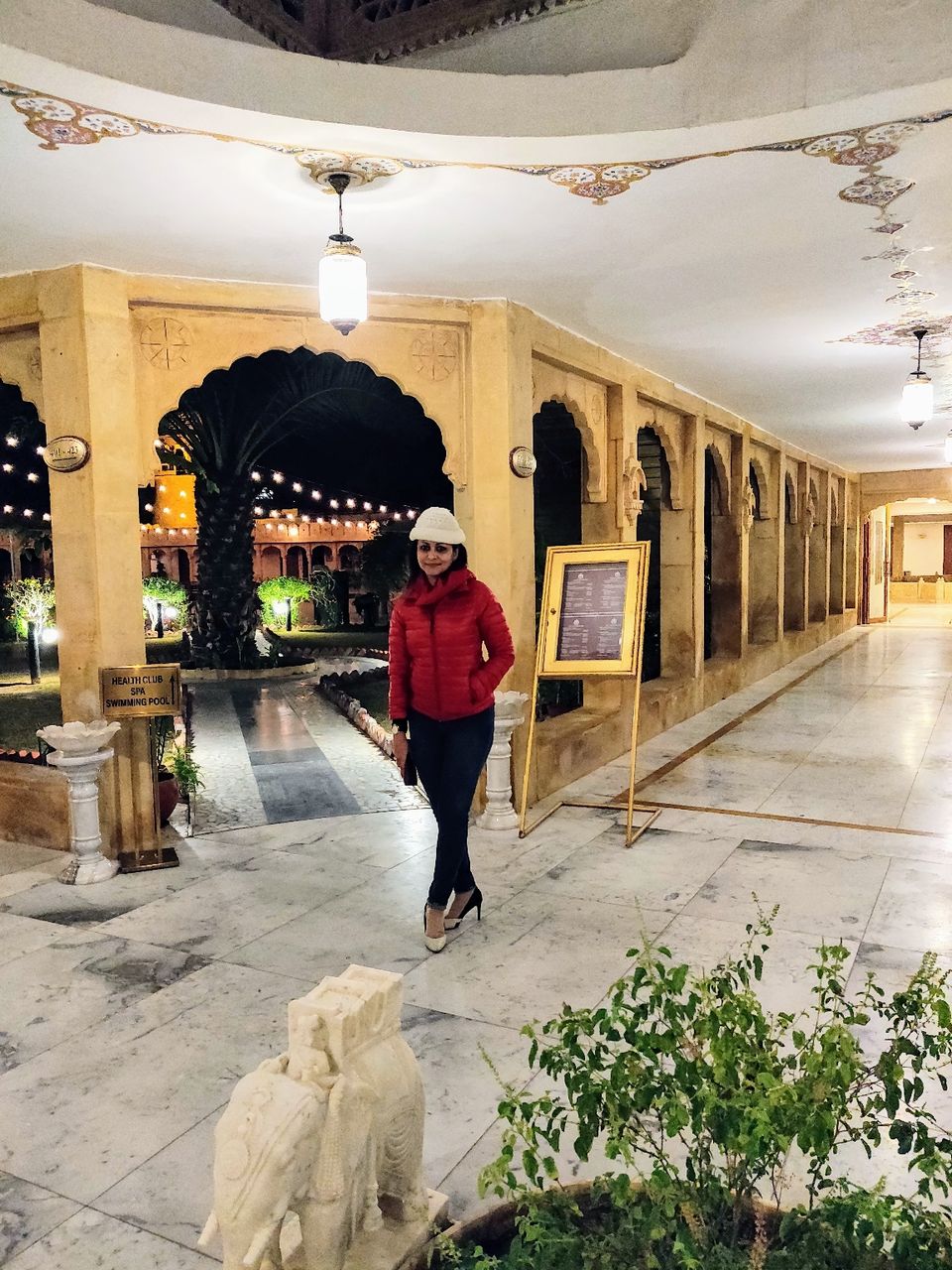 With the legend himself! 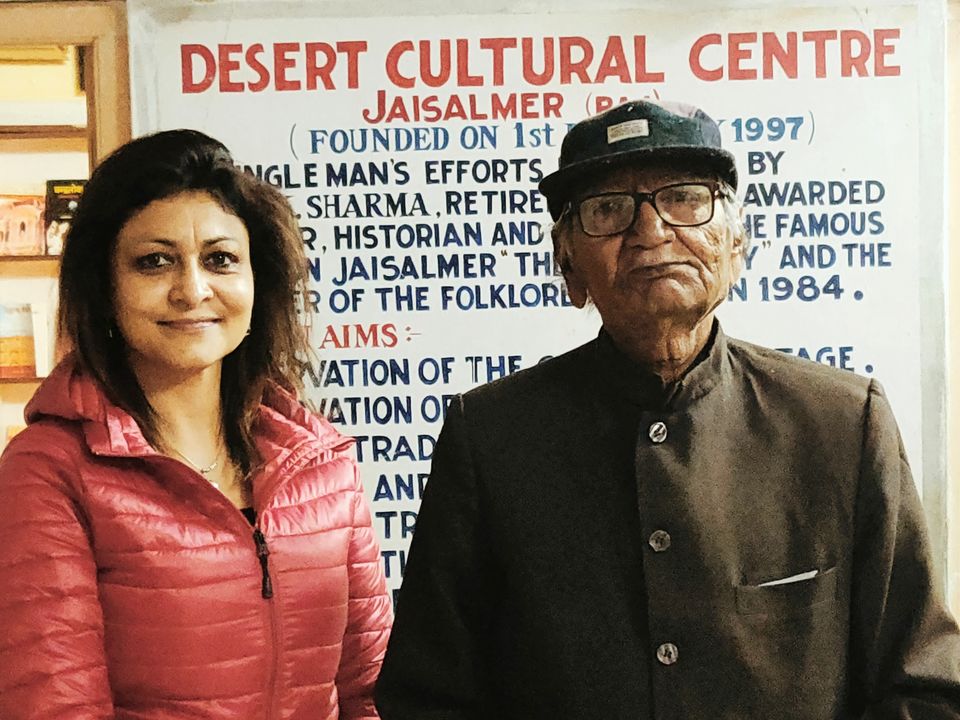 Time to let you hair down!! 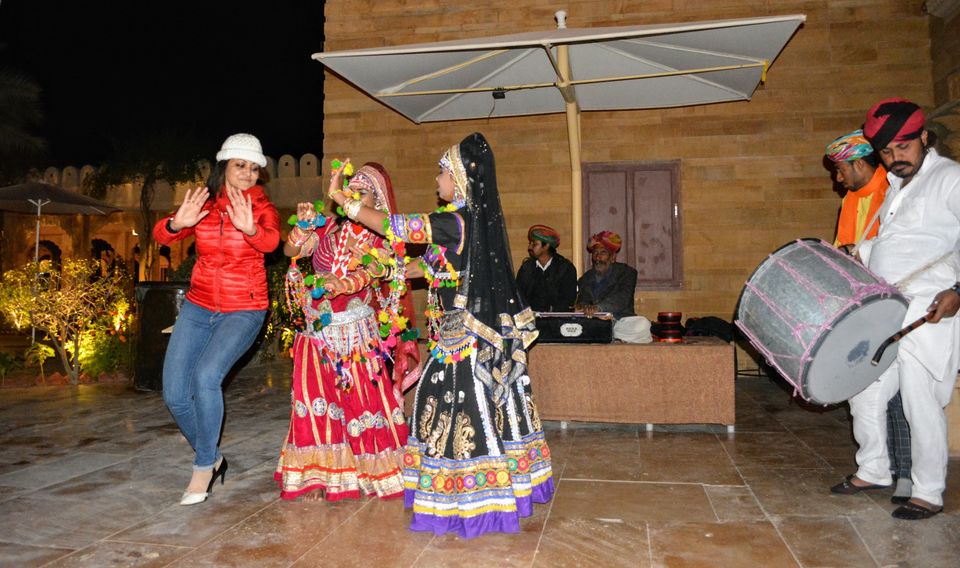