By Travelling with us 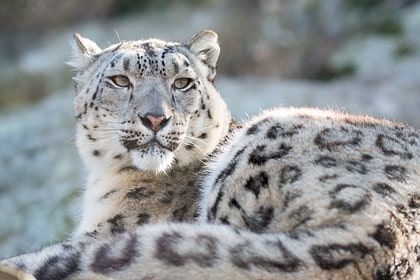 The cold desert of Ladakh is home to many mammals and birds that have adapted to the extreme cold of the Indian Himalayas in different ways. Many of Ladakh's animals are endangered such as the snow leopard, the Tibetan wolf, the Tibetan argali and the black-necked crane.

Ladakh is a marvel of nature as it has been blessed with a plethora of exotic migratory birds and wild animals. Spread over 59,146 sq. km, Ladakh is a cradle for a large number of bird species and wild animals that roam freely in their natural habitat.

The unique ecosystem of Ladakh offers a chance to wildlife aficionados and admirers to look at some of the most beautiful and rare species of wildlife against the backdrop of blue skies, snow-clad peaks and rugged mountains. 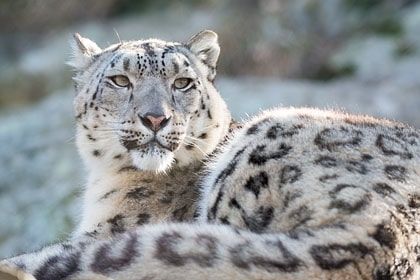 Snow leopard is one of the most elusive species of animals and that is what makes it so appealing. However, due to threats to this mysterious cat, “Project Snow Leopard” was initiated by the Government of India along with Snow Leopard Conservancy to protect the animal with the help of the local communities. Villagers in Hemis National Park, Nubra valley and Hanle have pledged to help in the protection of snow leopard. As a result, the number of snow leopards has increased significantly in the last few years. Snow leopards are seen from October to mid-March and that is when Snow Leopard trek is organised in Ladakh. 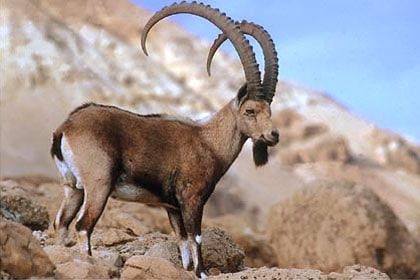 Asiatic Ibex, considered to be a sub-species of the Siberian Ibex, has distinctive beautiful horns. It is known to avoid areas with deep snow and tall vegetation. Asiatic Ibex is active before and after sunrise and remains inactive during the day. However, they are active during the day at the time of heavy snowfall. Asiatic Ibex has thick fur that protects it from the cold in winter, but it shed it once a year in summer. Often found in a herd of 50, Asiatic Ibex is an herbivore and feeds on shrubs and grasses. 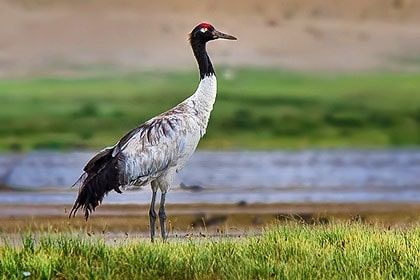 The black-necked cranes are endemic to the Tibetan region and the Himalayas. The chances of sighting black-necked cranes en route Tso Moriri and Tso Kar Lake are quite probable. It is the only high-altitude crane among the 15 species found in the world. These migratory birds have been protected by the locals for centuries and are often found in the wetlands. It is an endangered species of bird that is facing a threat for its survival from stray dogs. 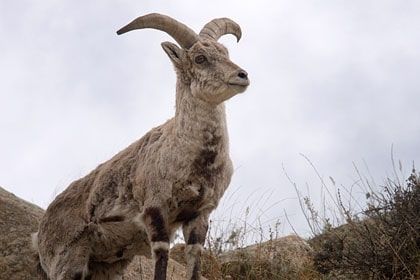 Unlike its name, blue sheep or bharal is not a true sheep but rather intermediate between a sheep and goat. Its coat is greyish blue in colour which turns to red-brown in summer. Males have large rounded horns that are directed up and sideward whereas the horns of females are short and straight. It feeds on herbs, shrubs and grass. Blue sheep has excellent camouflage skills. It is extremely difficult to spot blue sheep as it remains motionless when approached but can move swiftly to safety when alarmed. 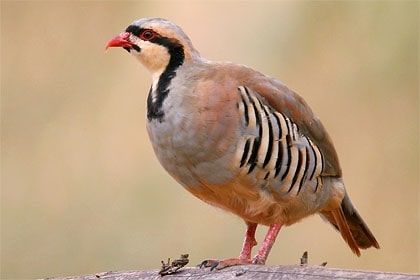 Chukar is chicken-like with a plump body, short legs, and a small round head. It has bold, vertical black bars on its side. It can be seen in uninhabited rocky regions of the Himalayas and known to be shy. Due to its camouflaging qualities, Chukar can be difficult to spot. It is a ground-dwelling bird that prefers to walk or run than fly. It runs uphill with ease and can outpace a human. Chukar is found in small flocks in all parts of Ladakh. 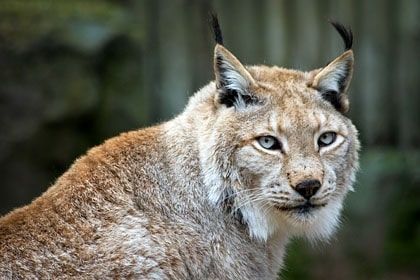 The Eurasian Lynx is one of the rare species of cat found in Ladakh. It is bigger in size than cats, and is muscular and has strong limbs. The colour of its coat varies from tan to grey and reddish-brown and has spots over the upper limbs. Its hind legs are longer than the forelegs. It has a distinctive long tuft of hair on its ears. Eurasian Lynx is an excellent climber and is also known to be secretive and elusive. It is considered a loner but can be seen in a group of up to four on rare occasions. 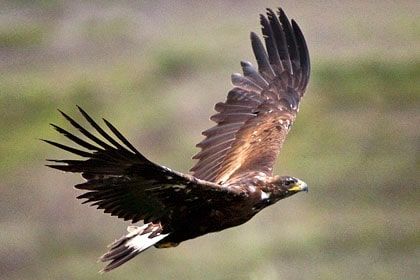 The Himalayan golden eagle is an imposing figure once in full flight. This predatory, found in the Indo-Tibetan region, feeds on snowcocks, pigeons and smaller birds. It has broad wings which it uses to glide up to 200 km/h and pale yellow plumes at the back of its head from which it gets its name. The Himalayan golden eagle can be found in open landscapes in mountainous regions. 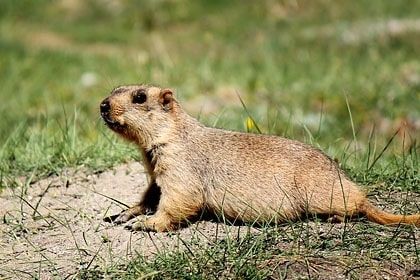 Himalayan marmots are found in dry and open habitats, including alpine meadows, grasslands, and deserts. Marmots, which are similar in size to a house cat, belongs to a species of rodents in the squirrel family. They have stout limbs and a short tail. Marmots live in excavated burrows where they hibernate for more than six months per year. They feed on grasses, roots, leaves and seeds of various plants. Marmots often stand on their hind limbs for observation and scream on sensing danger. 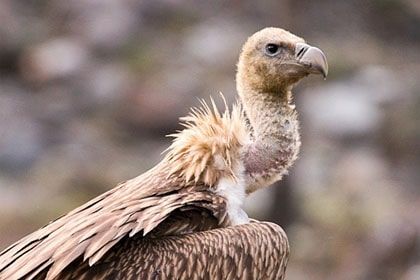 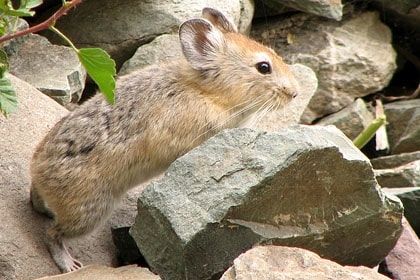 This mouse-hare-like animal has a round body with short limbs. Its ears have a distinctive rust-coloured exterior and it doesn’t have an external tail. Pika does not hibernate throughout the winter and remains active beneath the snow in a network of underground galleries. It stocks grass and wildflowers for the winter. Its life span is two years. Pika lives in family groups and is considered a social animal. It is mostly found in plains of Tso Kar and Tso Moriri. It can also be spotted in the Hemis National Park during the Markha valley trek. 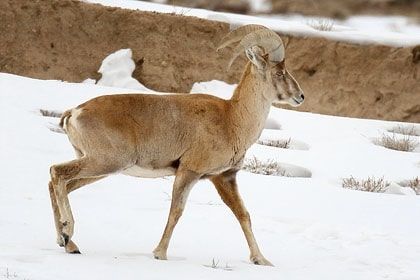 Also known as red sheep, Ladakh urial is endemic to Ladakh. It is considered to be the smallest of all the wild sheep. Its horns are back curved, wrinkled and slender. The adult male has a dark ruff from its throat to the breast. Ladakh urial sheds its winter coat at the onset of the summer. Males are heavier and larger in size whereas females are smaller with shorter horns. Ladakh urial lives in herds and is found in steep, grassy mountains slopes. It moves to lower slopes in the winter. 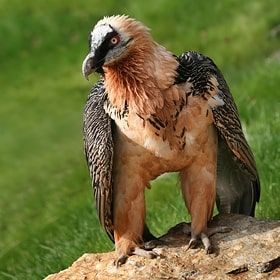 It is one of the largest prey birds. Commonly known as the bearded vulture, Lammergeier is not bald-headed like other species of vulture. It is unlike any other raptors in appearance. It is characterised by long, narrow wings, an elongated body shape, and a long, wedge-shaped tail. Females are larger in size than males. Lammergeiers are often found in towns, villages and city outskirts, especially around dumping grounds and slaughterhouses. 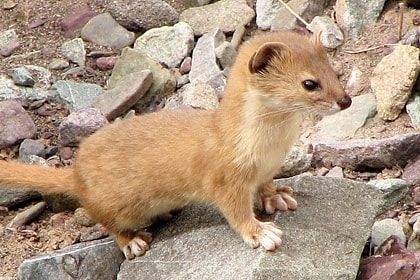 The mountain weasel is a carnivore and feeds on pikas, birds and lizards. It has a slender and long body while its limbs are slender and short. Its tail is half of its body length. The head of a weasel is triangular in shape and it has long whiskers. Its coat is chocolate brown in colour and it turns pale in the winter. Males are heavier than females despite being of same size. The mountain weasel has a life span of seven years. It is considered a natural athlete due to its agility and versatility that allows it to run, climb and swim. The number of mountain weasels is decreasing and they are considered as near threatened. 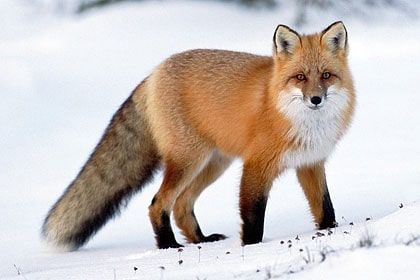 The red fox gets its name from the coat which is reddish in colour. Its body is covered with long and silky fur. Its limbs are slender and it has a dark spot below both the eyes. Red foxes are blind at the time of birth but gain eyesight after five weeks. Red foxes are territorial animals and are often found single or in monogamous pairs. It is found in sandy wastes, riverbeds and sand dunes in semi-arid areas of the Indian Himalayas. 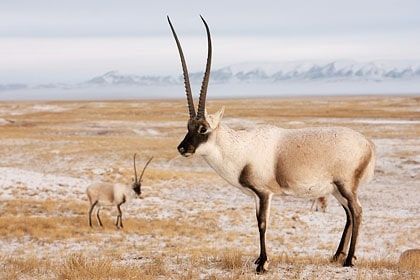 The Tibetan antelope is famous for shahtoosh, one of the finest wools produced. Its fur is used to make shawls but the only way to obtain wool is to kill the antelope. As a result, it faces a threat from poachers. Around four antelopes are needed to produce a single shawl. The Tibetan antelope is a shy animal that inhabits in high-altitude areas. It lives in large herds consisting of females and young. Males stay separated from these herds but join them during the breeding season. 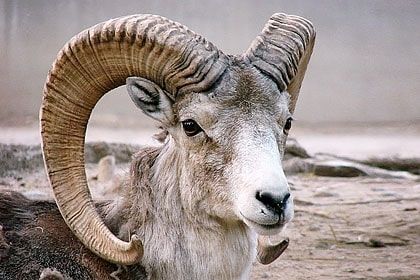 Tibetan argali is the largest of all wild sheep. Eight species of argali are found in India among which the Tibetan argali is the biggest. It resembles an antelope and is also known as the Great Tibetan sheep due to its long legs and strong body. The horns of males are massive, wrinkled and do not exceed a single circle. Tibetan argali lives in high-altitude plains and hills and never descend below 4500m. It lives mainly in the eastern part of the Changthang region. 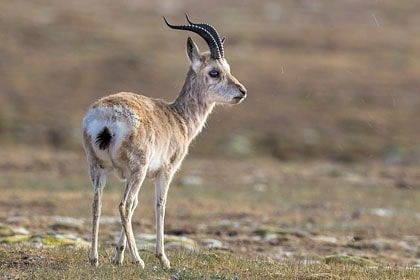 There is little information available on Tibetan gazelle. It has a stocky, barrel-shaped body and it is grey in colour. Its legs are thin and the tip of its tail is black. It inhabits in open landscapes and is also found in valleys and high ridges in mountainous regions of the Himalayas. Tibetan gazelle is very shy and run to safety on the slightest suspicion. Its population is estimated to be between 70-80 and is found in Kalak-Tartar plains in the south of Hanle valley. 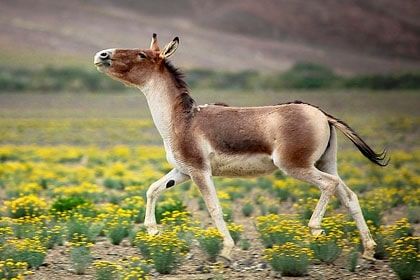 Known as kiang in Ladakhi language, Tibetan wild ass is the largest of all the African and Asiatic wild asses. Kiang has a massive head with a powerful body and its hooves are large. Kiang is reddish-brown on the back while its belly is white. Both males and females look identical. Kiang can be easily found in open grasslands of Changthang in the Tso Moriri lake and Tso Kar areas. It is common to see kiang during the Rumtse to Tso Moriri trek in the Rupshu valley. 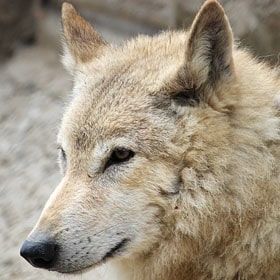 There are two species of wolf found in India among which Tibetan wolf or shanku is found in Ladakh. Natives hunt this wolf for the protection of livestock. It has a strong body, thin legs, a V-shaped head and its winter coat is extremely thick. It is estimated that only 300 Tibetan wolves are left in the entire Himalayan region. They descend down in winter but move up to snowline in the summer. The Tibetan wolf is very shy and secretive and is found on the Changthang plateau, Markha valley, upper Suru and Zanskar. 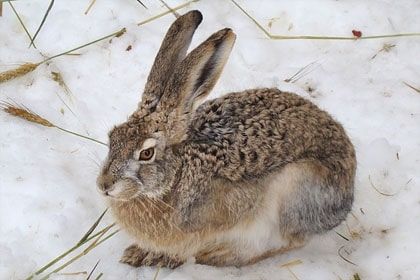 Woolly hares are found primarily in upland grasslands and alpine cold desert between 3000m to 5300m. Woolly hares are friendly and are active during dusk and dawn. Its fur is thick and curly while its tail is short and bushy. The colour of its coat is brownish-grey. Both males and females are identical. They feed on herbs, plants, roots and grasses. Woolly hares are found in Rupshu and Changthang plains, and also in Markha and Rumbak valleys of the Hemis National Park.