When I visited Dachhan Valley in Kishtwar last year, I wanted to visit Nanth Nala, a holy place that I had heard of. Not much was known about this pilgrimage outside Kishtwar district, but I had read a few sketchy accounts about it and that had fired my imagination. It seemed like another destination like the popular Amarnath. So, I reached Jammu one fine day and then from there drove to Kishtwar. The route ahead was through little known places – Tangdoor, Bhanderkoot, Palmar, Patimhala and finally Dachhan, the last four approachable only on foot.

From Kishtwar bus stand, we took a cab at 5 in the morning for Tangdoor, where we reached after a two-hour drive. We stopped for tea there, preparing for our walk ahead. It took us three hours to reach Sounder, the gateway to Dachhan Valley. We were tired but the so striking was the landscape that we paid not much attention to our protesting limbs. We walked through the day and reached Panjhdhara at 4 pm. It was going to be out stop for the night.

When we got up the next morning, so beautiful were the surroundings that we decided to spend another night at Panjhdhara and explore the region. In the event, we visited quaintly named villages around – Dilgoth, Lopara and Chicha, each more beautiful than the other. Satiated by the end of the day, we sunk into our beds for the night early as we had to start early the next day for Gugath, our camp for the next night. It took us almost an entire day to get there, but the reward was gorgeous views almost all through.

The next day’s destination was Kaikoot, 15 kms ahead. This was the first main halt of the pilgrimage, for at Kaikoot stands the temple of Hud Mata, a local deity. Hud Mata is the local name of Parvati, Shiva’s consort, derived from Sanskrit word hutti or ahuti. In her previous incarnation, Parvati is believed to have been the daughter of king Daksh Prajapati. As the legend goes, she resorted to self-immolation in the yagya organised by her father, who had insulted her husband. Close to the Hud Mata Temple is yet another old temple in Kaikoot. Made during the rule of Raja Maha Singh of Kishtwar in the 17th century, it is a Naga temple, made of deodar wood and stone. The fine wood carvings and stone sculptures spoke of brilliant craftsmanship of the period.

Terraced fields surround the temples and amidst them are old stone walls, suggesting that this was a place of some significance in the past. Close by, at the foot of Brahma peaks, is a small lake called Brahmsar. Its water is icy cold and sparkles in a brilliant sky blue colour. Taking a dip in the cold water of the lake is nothing short of adventure, but is considered holy by locals who believe that Lord Brahma, the creator of the universe, resides on the overlooking Brahma peaks. They believe that all sins can be cleansed by a dip in these waters. The beauty of the region we had travelled thus far was matchless and if developed well, the tourist circuit of Kishtwar-Ikhala-Panjdhara-Nauthnala-Tri Sandhya-Brahmsar can attract thousands of intrepid travellers. It is also a place perfect for trekkers.

From Kaikoot, we headed to ‘Nanth Nala’ of Dachhan, our final destination. There is a cave at Nanth Nala, which has three naturally formed ice lingams; the devotees believe them to be Lord Shiva, Parvati and their son Ganesh. From the ceiling of the cave, milky lime water oozes out drop by drop and falls on the three lingams. Elderly locals say that there used to be a kund (pool) inside the cave earlier in which, if you were a true believer, darshan of Lord Shiva’s family could be had with the help of a torch light!

Devotees throng to the cave and the Hud Mata Temple annually on ‘Haar Shudi Ashtmi’ (eighth day of the bright lunar fortnight in the month of Haar in the local calendar). Initially, only the people of Dachhan participated in this yatra, but now it has gained popularity and people from other areas of Kishtwar district are joining in as well. As part of the ritual, pilgrims of Kishtwar and its adjoining area assemble at Gori Shanker Mandir in Sarkoot and travel by buses up to Patimhala and then on light vehicles to Ikhala, 40 km from Kishtwar. From Ikhala, they reach Sounder on foot.

After a night’s halt at Sounder, the pilgrims, along with the holy mace of ‘Hud Mata’, start their onward journey from Radha Krishan Temple in Sounder to Viraat Mata Mandir in Dilgoot, travelling a distance of about 6 kms. Many more devotees join the yatra in this leg. After the night’s stay at Dilgoot, the picturesque journey towards Nanth Nala begins. Travelling a distance of about 20 kms, pilgrims reach Gugath, a picturesque ‘summer resort’ for the shepherds of Dachhan. The next day, which is Haar Shudi Ashtami, the yatra concludes at a shrine which is 8 kms from Gugath. The pilgrims then head to Tri Sandhya, another 2 kms ahead, for a holy bath to complete their yatra.

It was on the morning of the fifth day of our ‘yatra’ that we sighted the Brahma Peaks. It was here, where we stood, that the magical stream appears thrice a day. The Tri Sandhya stream is like any other stream we had seen, except that it flows only thrice a day, every day. We watched as the stream magically appeared at 5 pm and then, slowly receded and disappeared without any trace by sunset. Devotees consider the waters sacred and it is considered auspicious to take a bath in the water for cleansing of the soul. The name ‘Tri Sandhya’ has been attributed to this stream in the belief that prayers should performed thrice a day by this stream to Lord Shiva, Parvati and Lord Brahma, who are believed to reside in the region. The stream is situated opposite the Brahma Peaks with the river ‘Nanthnala’ flowing in between. Locals believe that the stream always appears thrice a day, except in the presence of a wicked person. The presence of such person is considered a bad omen for the region and the waterfall would not appear, they say.

With the myths in our mind and magic in our hearts on the morning of the sixth day, we headed back and were able to reach Panjhdhara by 5 pm. The next day we were at Kishtwar before noon, physically going back to our homes but mentally still at Nanth Nala. 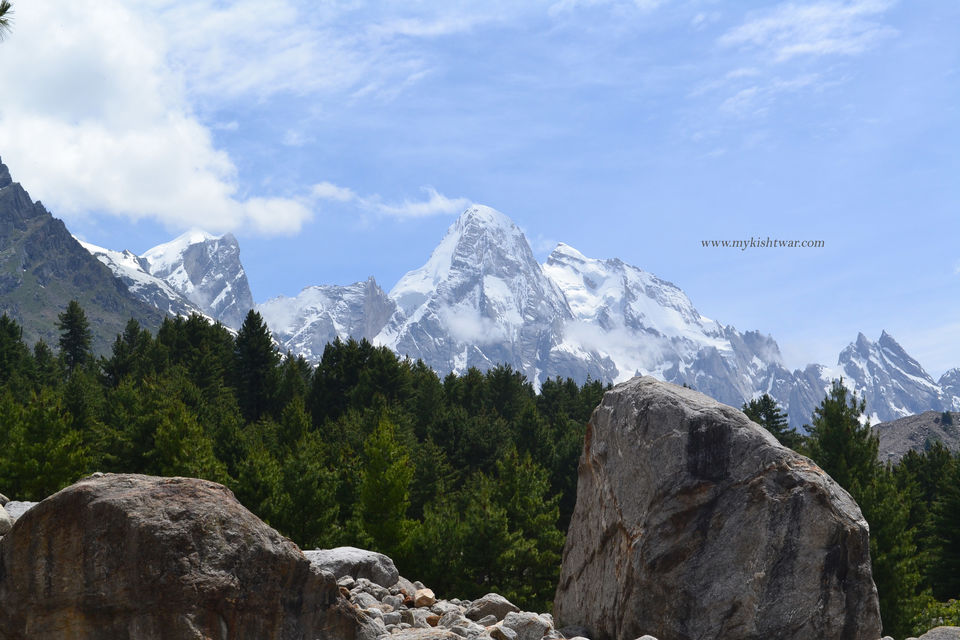 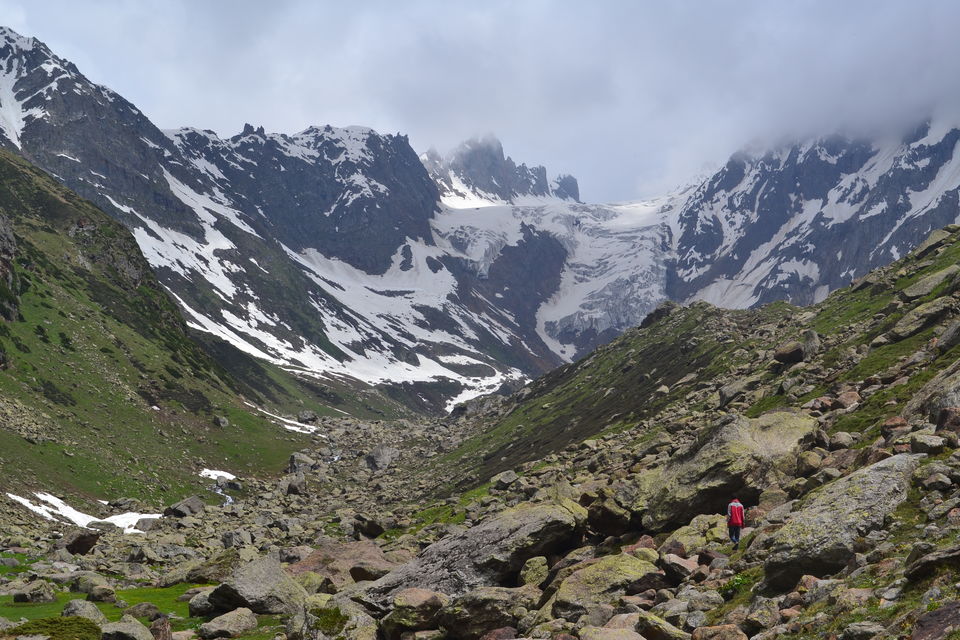 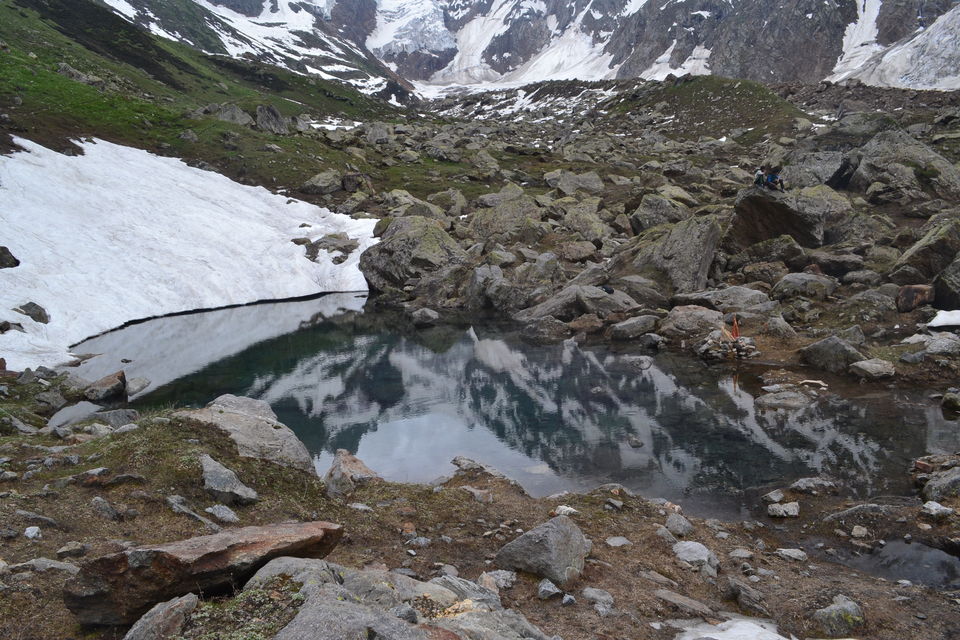 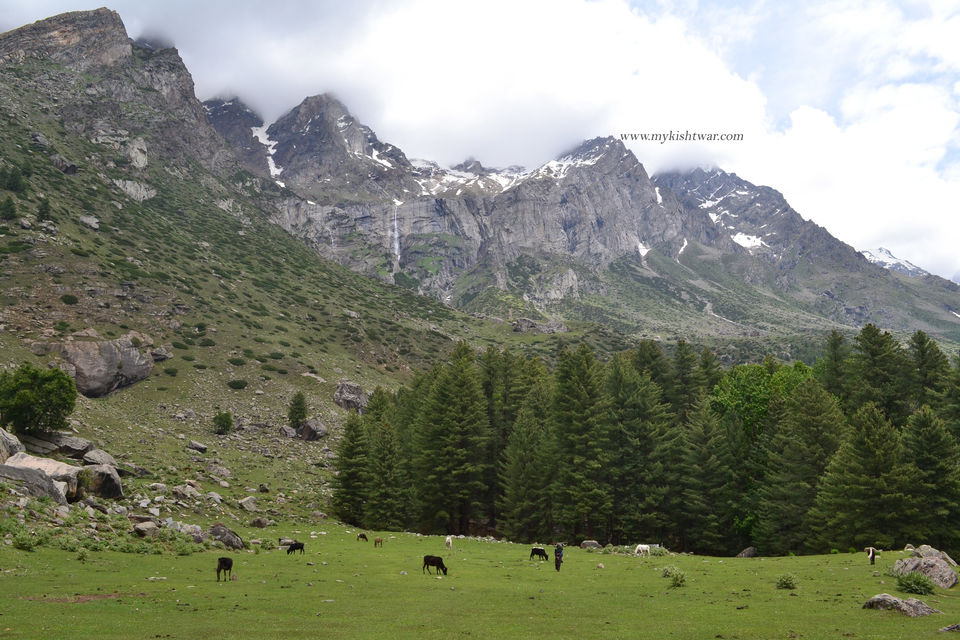 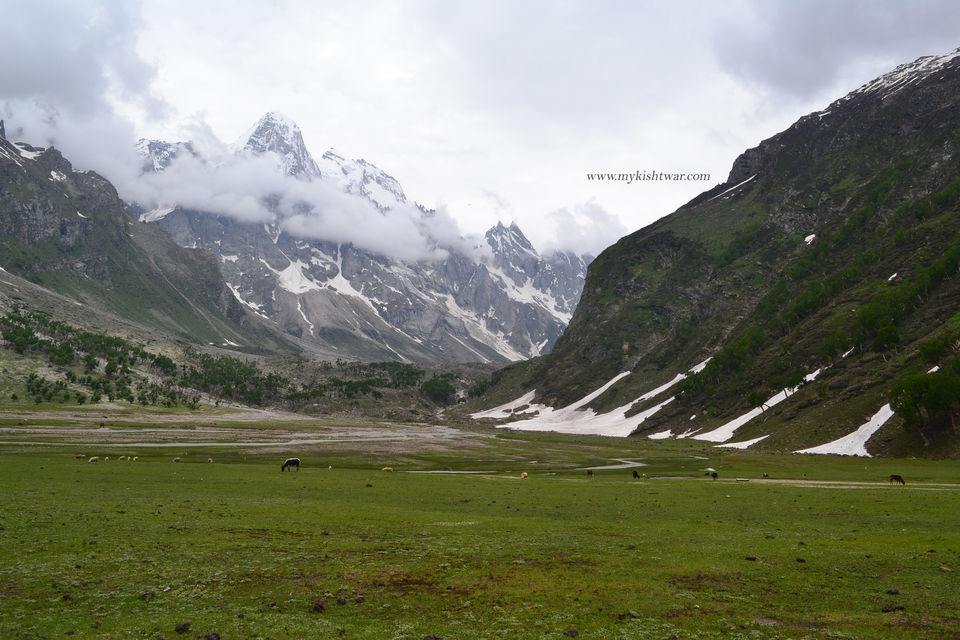 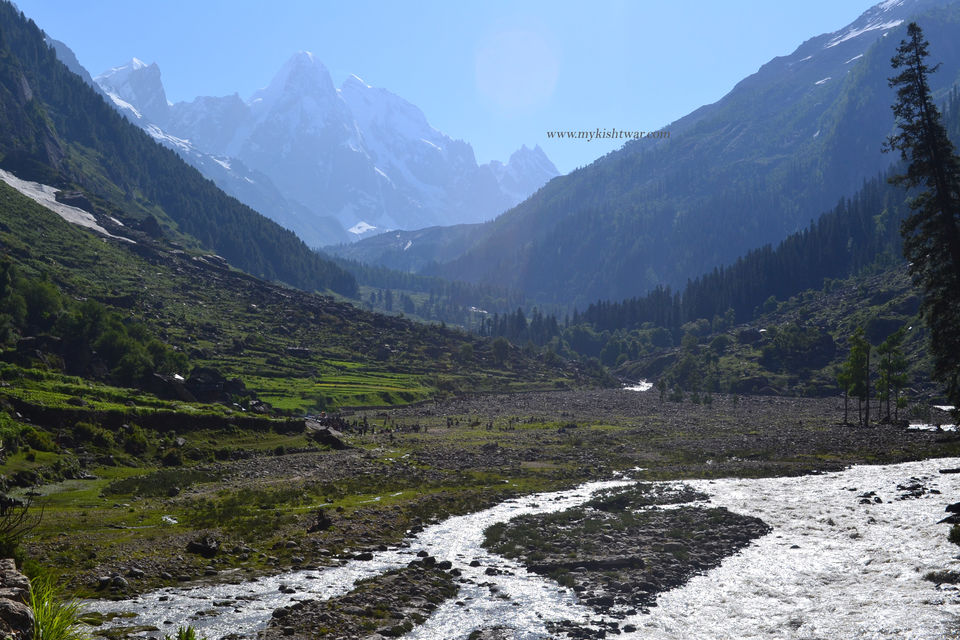 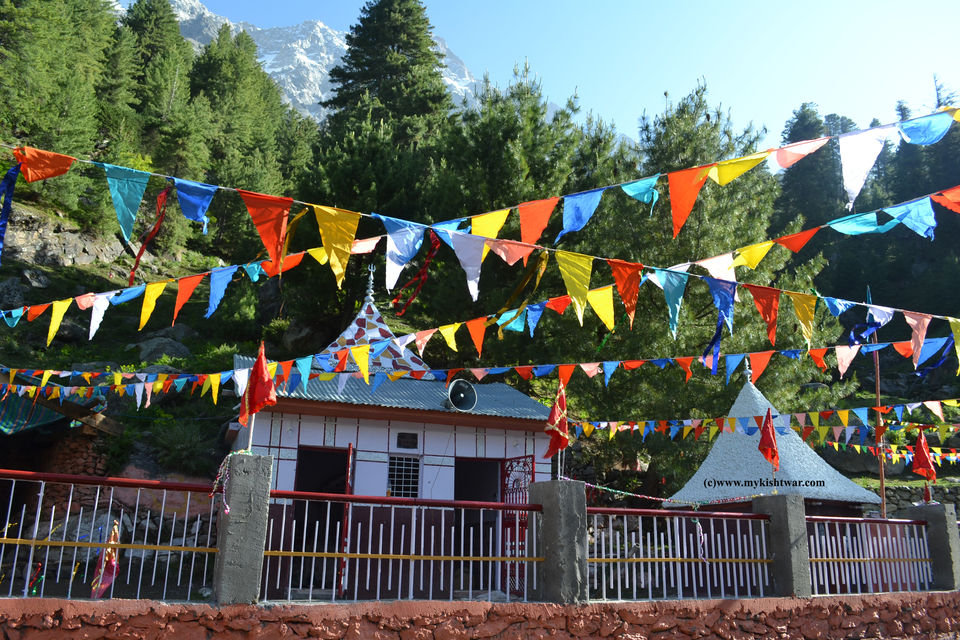 Me and my friend Rohit 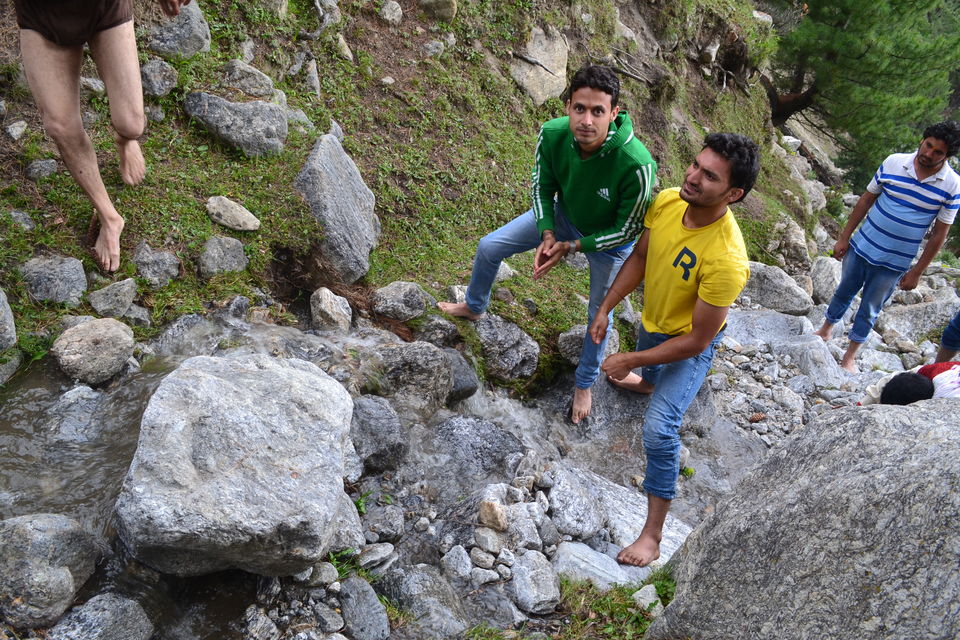 Me and my friend Daljeet on way to Brahma Peaks 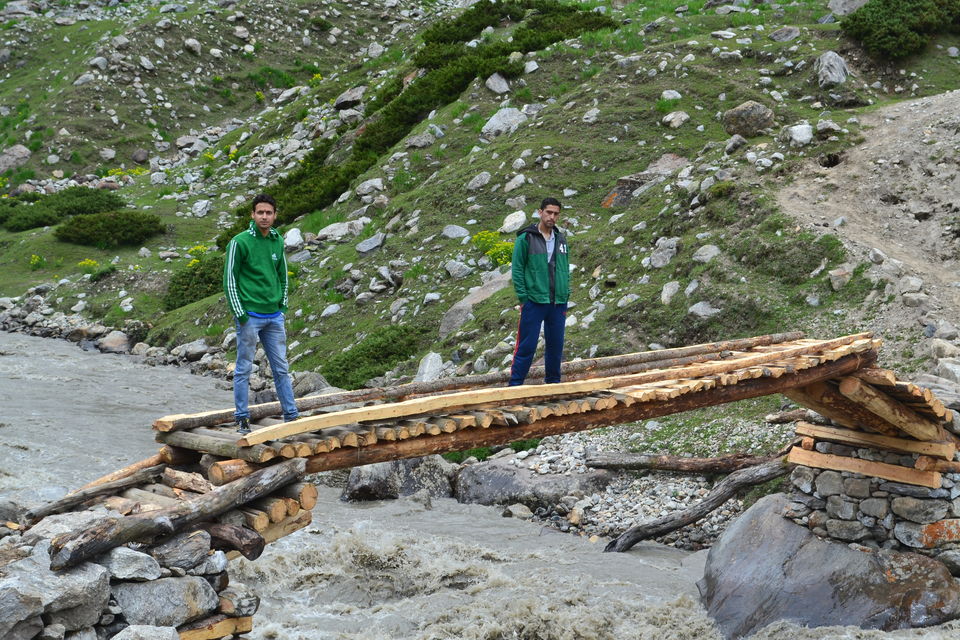 Me and other friends at Brahm sarovar 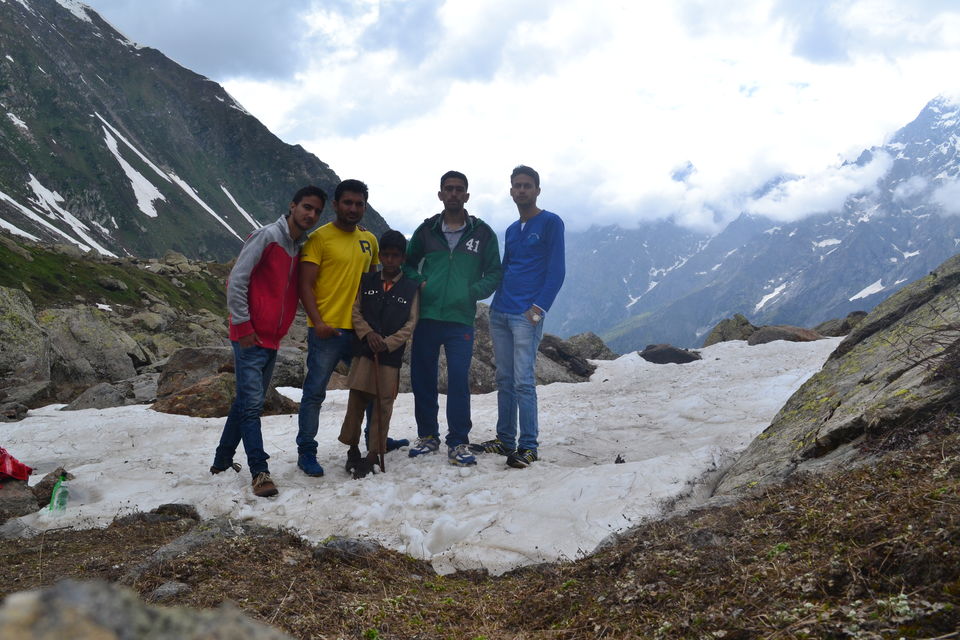 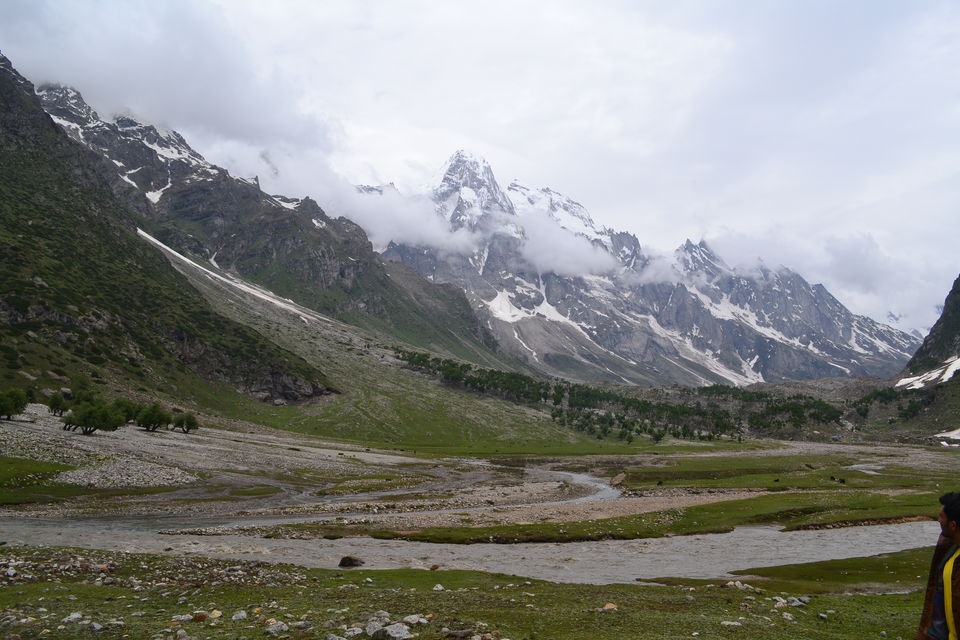 Moving towards temple of Hudh Mata 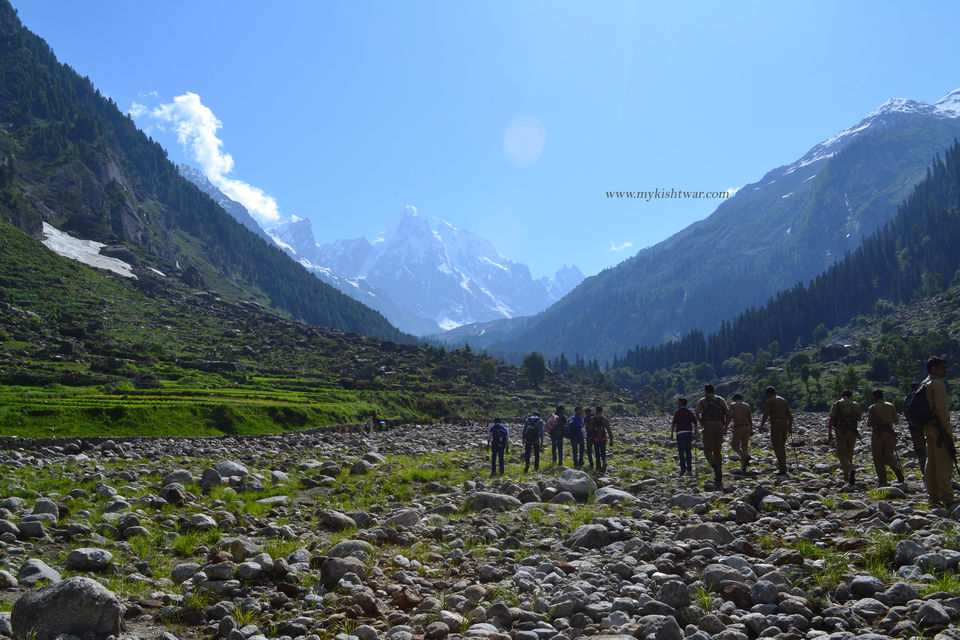 One has to cross this Hidden Bridge to enter Dachhan Valley 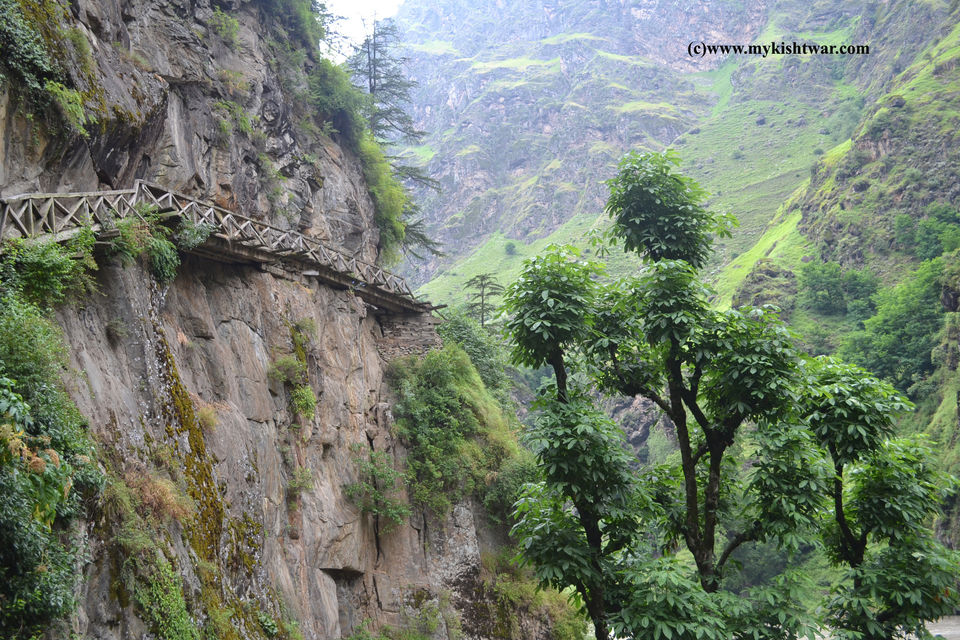 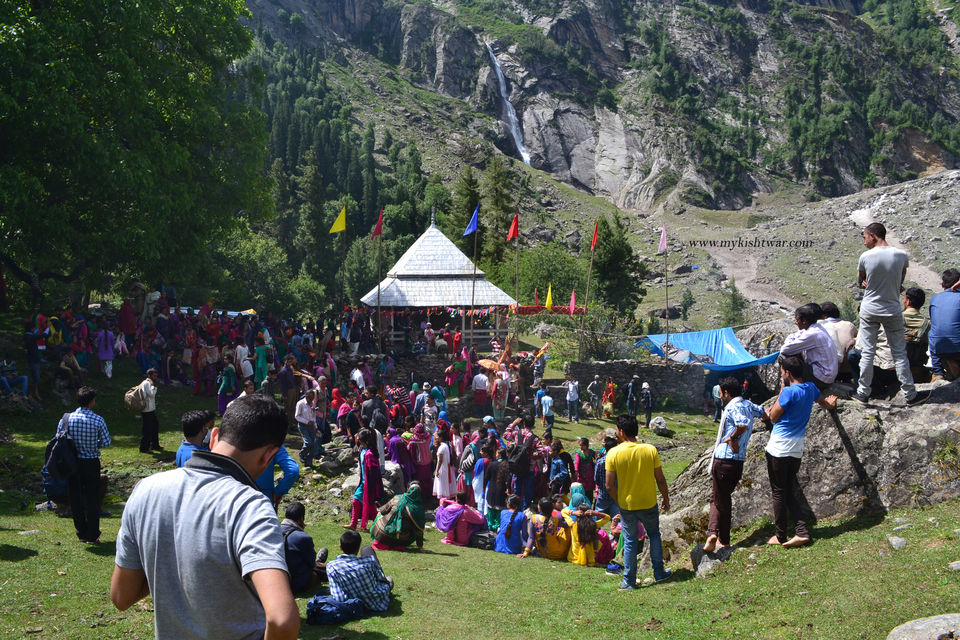 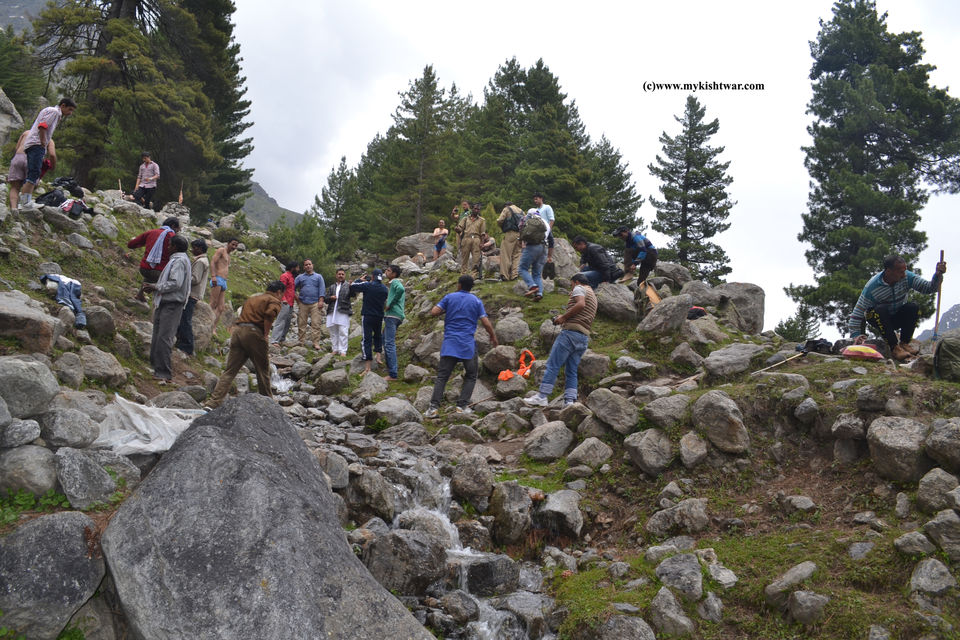 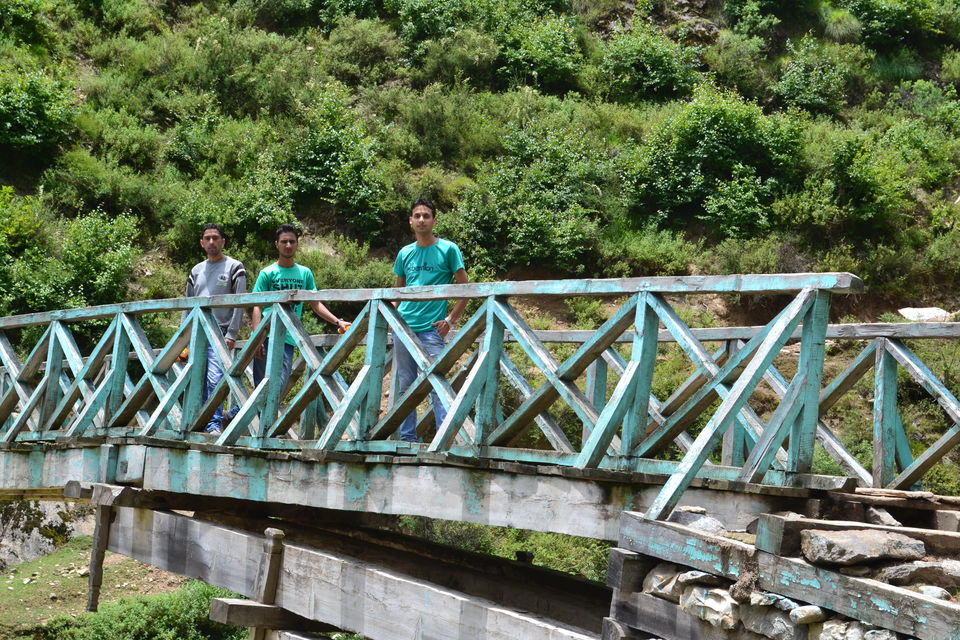