A glimpse into the architectural marvels 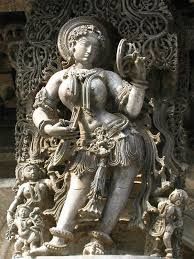 Do you love art and sculpture?. Then here are two places to explore. I am talking about Belur and Halebidu, both in Hassan district of Karnataka.

A 45-km drive from the district headquarter (Hassan) takes you to the marvellous place Belur, a delightful destination. The main attraction is the Lord Channakeshava temple, one of the Pancha Narayana kshetrams (5 holy places) started by the Sri Vaishnavite saint Swamy Ramanuja. Hardly 700 mtrs from the main bus stand, the temple can be reached on foot easily. Yagachi river flows nearby.

This star-shaped monumental temple, built by the Hoysala ruler Vishnuvardhana in 12th century, houses the idol of one of the trinities of Hindu mythology Lord Vishnu, popularly known as Channakeshava, while his consorts Soumyanayaki and Ranganayaki are worshipped in separate enclosures to his left and right respectively. Kappe Chennigaraya temple within the temple compound is said to be the model (prototype) for the main structure. Notable fact is that while the inner temple is of Hoysala design, the main Gopuram is in the Dravidian style. More than the divinity, the place makes you spell bound with its beautiful architecture, excellently sculpted. Once in, we see wonders; the artistic beauty of each of the 48 pillars there, innumerable idols that abound take you to the other world; be it the Madanike, the royal insignia of a man fighting with a tiger, Darpana Sundari, an elephant with lion’s legs, crocodile mouth on the ceiling wall above the interior entrance to the sanctum sanctorum. The round shaped ceiling structure with artistic designs also looks beautiful. They stand out in grandeur and makes us wonder at the artistic splendour. Each structure speaks volumes on the sculptor’s craftsmanship. For an ordinary visitor like me, this much is enough, while for people with deep interest on its history, there are well-informed guides to tell you much much more. Looks as if this uniqueness has probably prompted UNESCO to propose it for a World Heritage tag, A small pond exists within the temple complex. probably for use in temple rituals.

Within the temple precincts, there is this stone pillar whose base is not permanently fixed. This 40 ft pillar stands on a stone platform gravity-based, without a base. Marvellous, is’nt it?

This Hoysala capital - originally called Velapuri - is favourite with many movie makers too. Several film shootings are done here. Popular Telugu Director K.Vishwanath (Shankarabharanam fame) was so passionate about its lively structures & intricate carvings (made of soapstone), that almost all his films were shot with the temple background.

Adjoining Belur, is one more place Halebeedu (around 18 kms), which again is a wondrous spot with ornately sculpt designs around the Hoysaleswara temple. A beautiful, lawn-like outer garden welcomes the visitors. To me, Halebeedu looks one step ahead of Belur with many more attractions. Two huge Basavas (bulls) majestically sit on one side, while a Ganesh and Shivling idols adore the space on the opposite side. People flock in huge numbers everyday, more on general holidays. If keen to know the history of the place, one can engage a guide there who explains its background elaborately.

Belur is well connected by road from almost all prominent cities like Hassan (45 kms), Bengaluru (220 kms) and Mysore (165 kms)

By air: Nearest airport IS Mangalore 170 kms and Bengaluru 220 kms

Both can well be covered in a day.