The thrill of the mountains!.. doesn’t the phrase itself ignite your minds to know further. This is what came to my mind for the first time when I heard and came to know about Kudremukh. Popularly known as the face of the horse, as the route formed to trek and climb up the mountain was created with great poise by the horse riders more than 1000 years ago through the dense Shola forests, with trees as green as the darkest color you will ever see in the form of chlorophyll, rich in oxygen and undulating rises covered with fog-tinted clouds and mesmerizing meadows that give out a surprise or two melting into vast grasslands of avifauna. The wild jungle is situated around 350km from Bangalore the nearest metro, and around 100km away from Chikmagalur district. Kudremukh National Park as it is popularly known is nestled away as the one of the highest peaks in Karnataka (3rd highest to be precise) with a total trek distance of 23km to and fro.

Kudremukh was solace and serenity to its best. A weekend getaway perfect to hear the sounds of nature, the crunching of dry leaves, the rustling of twigs and branches, the breeze talking to trunks of the trees, the heavy gushing of waterfalls from each corner of the mountain, lush green shades of green from peacock blue to avocado green making pastel shades of green come alive on the vast canvass of nature. The play of colors in our lives is amazing. I am personally fascinated and inclined a lot towards nature’s play of colors be it in the clouds, mountains, waters or even food!…yummy right!..This trek with Nature Walkers certainly turned to be a serendipitous series of events right from the very beginning the trek had started. Get introduced to the outdoor leaders on this trek the sarcasm reality check Pawan and the ever-rappling Neha followed by an amateur trekker Myself Rucha. So Pawan and Neha were professionals to the core, what stamina and energy to motivate our whole pack.. simply astounding!…I kept myself busy in sorting the names, making faces familiar and jotting down some points and references to document this amazing journey. To trek with Nature Walkers is totally a local and ethnic experience. Experience it yourself with a personal touch, friendly leaders and concerned guidelines.

As soon we started adventure began, the rain Gods smiled generously upon us and made sure our rappling soul Neha and the dimple – studded Chinmay got drenched before we boarded the bus. So it all began in an array of surprises. Phones were lost and we got delayed further, but made it on time to the spot of dinner. On our way introductions were made, smiles were exchanged, hands were shaked (with each other of course, please do not get weird ideas) and the base for friendship was laid. We formally updated about the dos and donts on the trek, alongwith the objectives of Nature Walkers. The night went smooth, our Hyderabad and Chennai gang rested, while some naughty and ever springing souls made way near the driver’s seat and enjoyed the night’s drive, music galore, heads high and “dhinchak rapchik” to our “kamariyas”. The tea breaks at dawn were silent and peaceful to the heart. Prathima gave company to Pawan, and as dawn arrived, the winding road to Kodachadri took our breath away.

At the onset of sunrise we reached our homestay with a bumpety bum and humpety hum of a jeep ride that moved every inch of muscle in our body. From Bavikonda to Kudremukh we had to take a wild and adventurous jeep ride to our homestay after which we freshened up quickly and got going to climb the mountains with the most hilarious statement of the morning from Pawan “Please make straight circles”, now that is something to catch your attention. Time and again on the whole trek and journey whenever we wanted to come together he kept repeating it, HAHA!… On one side we had a lovely pair leading the pack who made sure all followed diligently, Neha and Sudhakar, mama mia!… the friendship blossomed like wild fire, and by the time we left the homestay even I was swooned by this straightforward and warm guy. Hot breakfast of ragi idlis, with steaming sambar was served with freshly grinded coconut chutney. A scrumptious filling to start the day, power packs were distributed, instructions directed and we made our way. The forest permission sought and now began the trail in the wilderness. The first 5km are moderate, you go through little streams and tiny leeches that welcome you with going into your shoes only if you are not careful. Monsoon was a boon in disguise because we even noticed the peacocks entertaining us and some wild deers on our wilderness trail. As we moved further into the trail we were greeted with intermittent sections of dense woods with free flowing water. Neha leading the pack, me in between coordinating between both sides and keeping all together, and Pawan behind managing and motivating each and every person, kept pace and reached the 7km point on time. We had a brief photo clicking session here. The place here is really a metaphor of solitude. There is one solemn reason why you would trek and that is to find peace.

With moderate fitness levels the trek is bound to be over in a span of 8 hours. The second lap was truly enthralling. The colors here are really idyllic in charm. As we started moving forward each of us needed extra amount of motivation to keep going. There was exemplary team rapport and concern. Unknown strangers became trusted companions. A captivating sight on Kudremukh is the “lone tree” in the second lap. I think Game of Thrones “three eyed raven tree” must have drawn inspiration from here. It was a moment of profound peace staring at the vast landscape from the top at this position. We reached the base of the peak and saw many people having their lunch. We inquired with some forest guides as to how much time more would it take and he said 20 minutes. We were literally beaming with joy, and there the last lap tested our endurance and fitness levels, just beyond the horizon lay our destination. At some point the misty fog even took away the well-deserved view of the peak. We took 20 steps more and we saw Chinmay, he waived back and we had reached the peak the very next moment. Prathima and me were flabbergasted at the triumphant experience. We had our packed lunch there, and the saw sight of Pawan and others, our whole group had reached the peak. A marvelous team effort!

After lunch we got going to go back through the same trail and encountered some falls and slippery roads due to heavy gush of winds and the unlimited pouring of rains. Nothing could be seen but we continued. The first 5km were ok, but the aftermath, shit!, thighs paining, ankles aching, hips twisted and so on, everyone felt the need for a dire massage. To top it all some girls were on their periods, but still nothing stopped them, not the slippery rocks nor the mushy muck on their way. At one point you feel that the body is giving up but no, till you reach the homestay you have to gather up that spirit and repeat to yourself, ” Yes I can”. The biodiversity in Kudremukh is your gift for the sweat you give away to Mother Nature. Nothing can be as beautiful and pure, as to what you get to see here in Kudremukh in its rarest form. As the sun set upon the horizon and hid behind the clouds it turned dark, and by the time Neha and me reached the homestay, we were waiting for hot pakoras and tea. Lip Smacking as it sounds they were amazing!.. The team effort of Srinidhi and Kaviyarasu is worth mentioning on this trek and of course Arun for his brilliant photographs. I missed Pam Pam so much for those candid shots. Night was surreal. Charcoal heated warm water was served for bathing and we freshened up. A quick chat about the day and our challenges, until dinner was served. We spoke of our adventures and learnings as well as the usual banter of Prathima and Pawan continued.

Dinner was a relish that time, all were so hungry, that the simple cabbage palya, steaming rasam and soft, mushy rotis were heaven to us. The meal ended with freshly prepared butter-milk from the home cow. Arun and His Mom were a darling as they saw to it that each one of the trekkers ate. The next morning breakfast was Chitranna or lemon rice and Upit, again no words, actually we all city folks must learn a thing or two from these village folks about cooking and staying happy. Morning was spent ploughing and exploring the paddy fields with the cow friends and Arun, followed by a water fall bath. Sitting under the waterfall and thinking nothing, I would give away a thousand lives for that. Uninterrupted peace manifold. Like children we were crowding to take a glimpse and experience of bathing under the waterfall. The waterfalls were a glittering glow of white. As we bade good bye to the family and “Sudhakar” specially, packed our stuff, I felt a sense of belonging to this place, why did we have to leave! So much was learnt on this trek. The bumpy jeep ride came to picture again, as we boarded our buses, a fresh shot of lemon juice and a dash of smoke to continue the journey, I so love Pawan for the drag!..On our way back we could admire the beauty of South western Ghats and its paddy fields. This region is truly blessed with abundance of flora and fauna. On our way back we made a suprise visit to the Channakeshswamy Temple in Belur built by the Hoysala Dynasty. Entertainment did not stop at that, pictures continued and the hilarious narration from the guide was everlasting. He compared modern world with India and today’s principles with the ancient. The only difference was that Lakshmi of today’s times also got angry on her Vishnu and made him work too. We had a short treat of bhuttas or corn-cobs and bhel, a mixture of puffed rice with onions,tomatoes, spices and a dash of lemon. Early dinner was chalked out at a Dhaba near Hassan, Non Veg fills enjoyed to the brim!.. 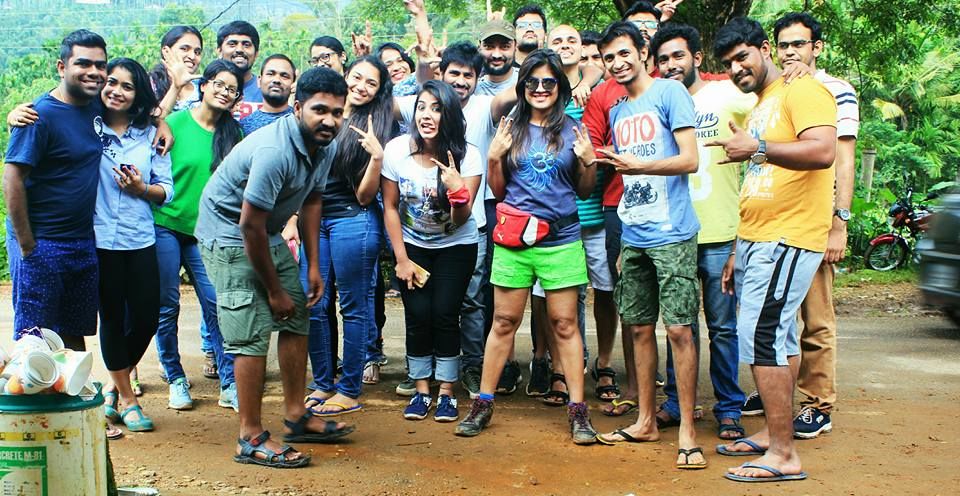 The last leg of the journey was crazily and thoroughly enjoyed by one and all, through “thumkas” and “matkas”, sassy hip hop moves, a mind-blowing playlist and the whole bus turning into a disco dance floor, we forgot all our woes and unleashed the dancer inside us.

So that is The Nature Walkers Kudremukh Trek to you.