I Made a Promise to the Beaches of Gokarna 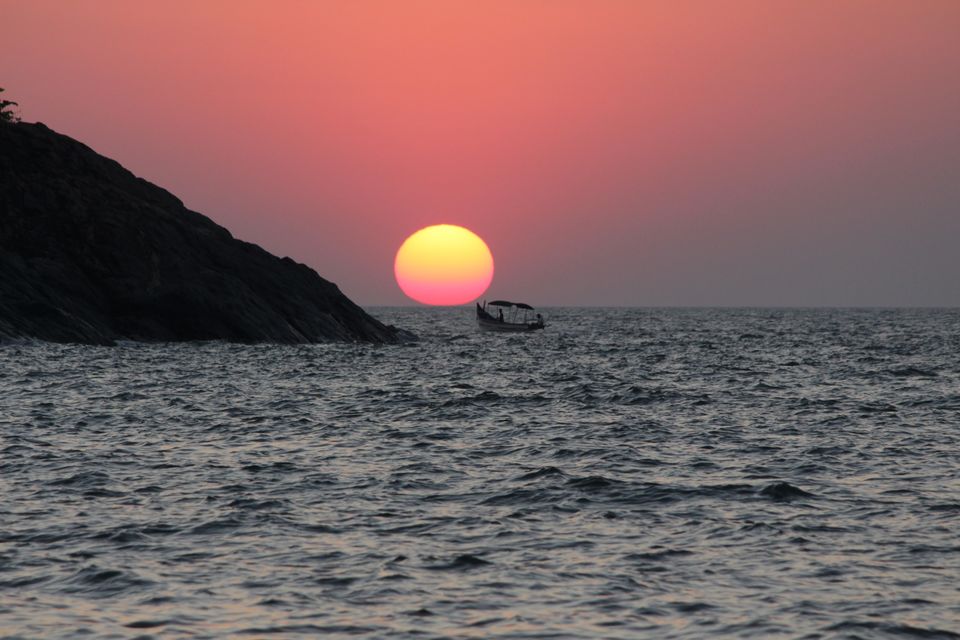 Storytelling is the art of perfect synchronization of the best of memories with a dash of imagination. But what do you call those smithereens of memories which are as beautiful as a fairy tale and have no amalgamation of imagination?

One such incident from my diary is that of the starry night on one of the beaches of Gokarna. I believe it was a gift from Mother Nature for the chance I took that day. As I sat on the beach throughout the night I considered myself to be the luckiest person at that point of time. My other two friends had passed out long back, but I wanted to see the sunrise and forced myself to stay awake. To my company was a very protective dog who sat next to me till the last minute. The shacks around had closed and the only source of light was the glittering stars, the moon and the reflection on the sea waves. I felt like I was sitting on my own private beach as there was no other human being around.  Quite often I find myself talking to the sea, but that was the longest and the best conversation we had. Everything around seemed magical and as I looked to my left and right, I could only see the never-ending stretch of the beach being washed away by the white sea waves. It was a December night and the cold breeze seemed to flutter with my thoughts. That was the night I fell in love with Gokarna for the third time. I got lost in the peace and the serenity so deep that I was not sure if that was just an imagination. With the passing number of hours, the stars started fading away and the black of the sky got domineered by a red hue. The water was still reflecting but this time, the reflection was that of the rising sun. Gradually people from the shacks came out with their yoga mats, and it was a completely different picture altogether. It was still beautiful.

Getting back to the chance I was talking about…I would have missed this serene opportunity if I had taken the bus on the previous evening, for which our tickets were already booked. But we checked out of our shack in the Kudle beach by the afternoon thinking that we can explore the town before boarding the bus. And we happened to reach the Gokarna beach for the first time in my last three visits, because it is always over-crowded. And this time, it was nothing different. But we kept walking on the sand, embracing the tan. It’s a long beach and we didn’t stop, even though the crowd faded away and there was nothing but just sand and water around. To our excitement, after walking for few kilometers (or may be it seemed so since we were walking on the sand, under the super bright sun) we saw a couple of shacks. We decided to halt in one of those for some refreshment and were so mesmerized by the beauty of the place that we decided to stay there for one night, cancelling our bus tickets. It was a secluded area, where people from different countries had settled for few months and had made it there temporary home. The shacks were run by them and defined tranquility.

I made it a point to visit that particular beach first, on my next trip to Gokarna, but as they say…the best can the experienced only once. I didn’t find any shack or whatsoever on that particular area on my fourth visit and the place was nothing like what I had experienced the previous time. To compensate, I walked around the rural areas of Gokarna, along the red-mud roads, only to witness the pristine culture of the place. One can also hire a scooty or a bicycle.

So why did I visit Gokarna for four times in a row?

Because I made a promise to the beach, to the sea, and to myself.

Four years back when I had visited the place for the first time, I was so overwhelmed by the serenity that forgot to click photographs. I didn’t explore much because I had little time in hand and wanted to experience the best of where I was. Sat by the beach in Kudle for hours, unraveling the tumults of my daily life and trying to capture the beauty in my mind; hogged on to the lip-smacking dishes that are available in those shacks (the option is plenty, with cuisines from all around the world, literally!). Ran around the completely empty beach at night, lit by the moonlight and spoke my heart out to the sea. I witnessed the sun gradually disappearing in the sea, while I was inside that particular water body.

I had to revisit the place. Nothing had changed in one year, just that the group of people I was with was different. But I could feel that there was a connection that I had already developed with the place. I felt comfortable there. The best part of my second trip was that I made a few friends from different parts of the world over a bonfire on the beach. The bonfire went on till the sun took over, as we sang and shared our stories with each other. And I fell in love with the place a little more.

My third trip was the best out of the four as I explored the most as we trekked from Kudle to Om to Half Moon. It was a day trek, but pretty arduous. Since we didn’t have any guide or anyone around to ask for the route, we lost our way a couple of times but managed to reach our destination. We took a halt in Om beach for breakfast, before starting our trek for the Half Moon beach. The trek was a little perilous as we had to cross steep rocks, with barely any space to place our feet and the roaring sea right below it. But the view was worth it. As we reached our final destination, the Half Moon beach, I realized that I had missed something really beautiful in my last two visits. It’s a small beach covered by thick woods on all three sides and a clear view to the horizon on the other side. With no source of electricity, candles and sea-breeze were the only luxuries you can demand. After a day-long trek as I sat on a rock to see the sun set, it seemed like one of the biggest achievements of my life; and yet another promise made.

As I sat by the beach in Kudle. 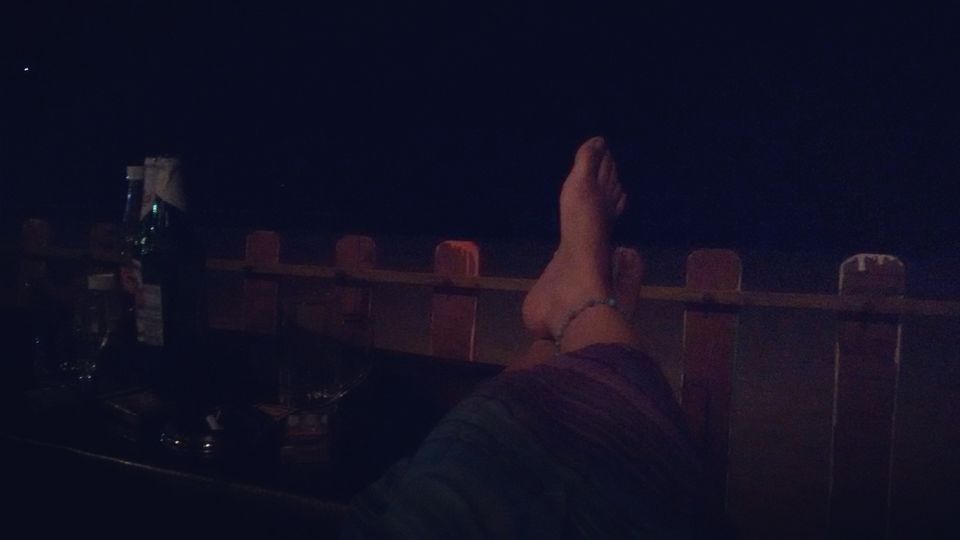 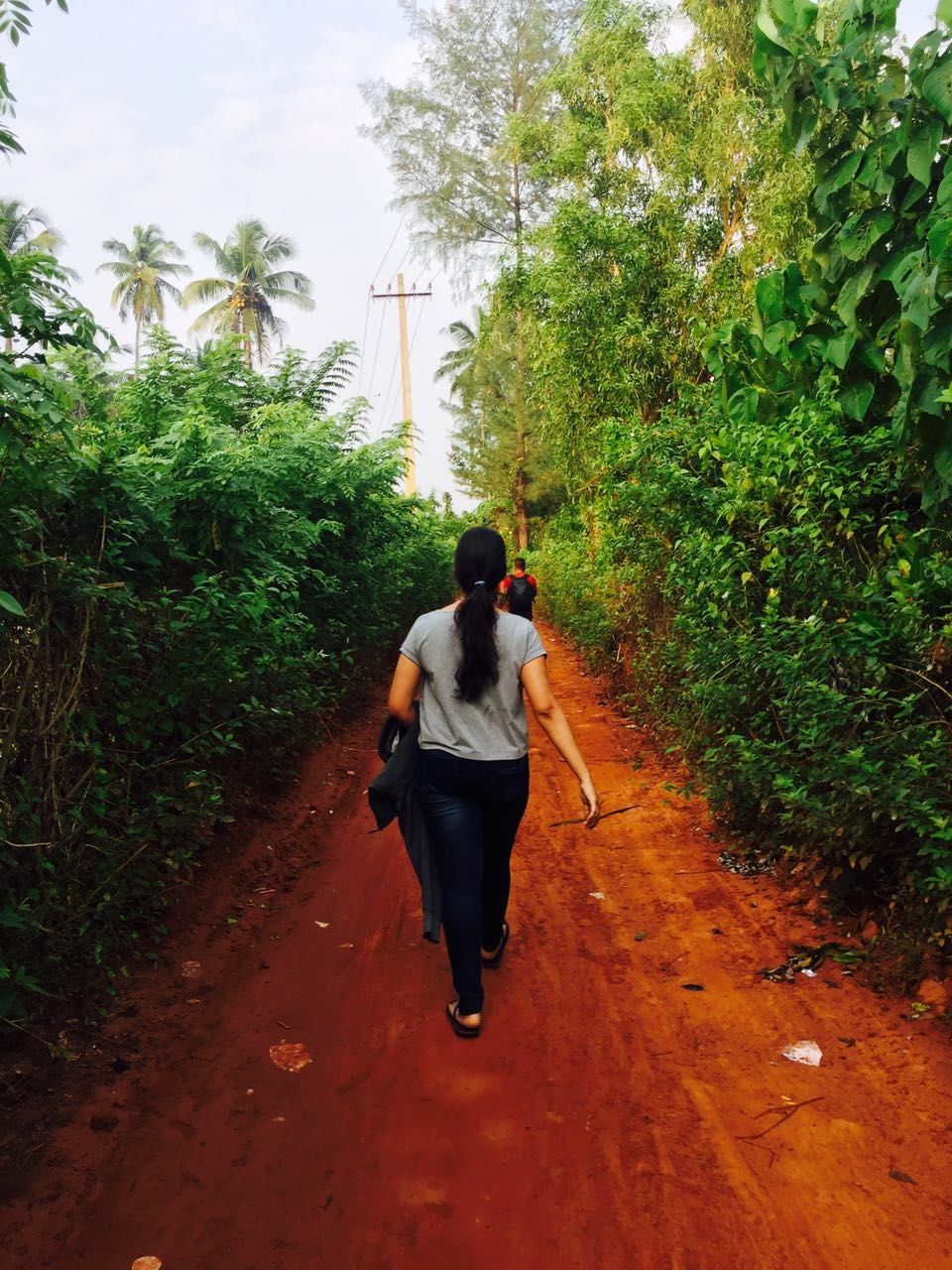 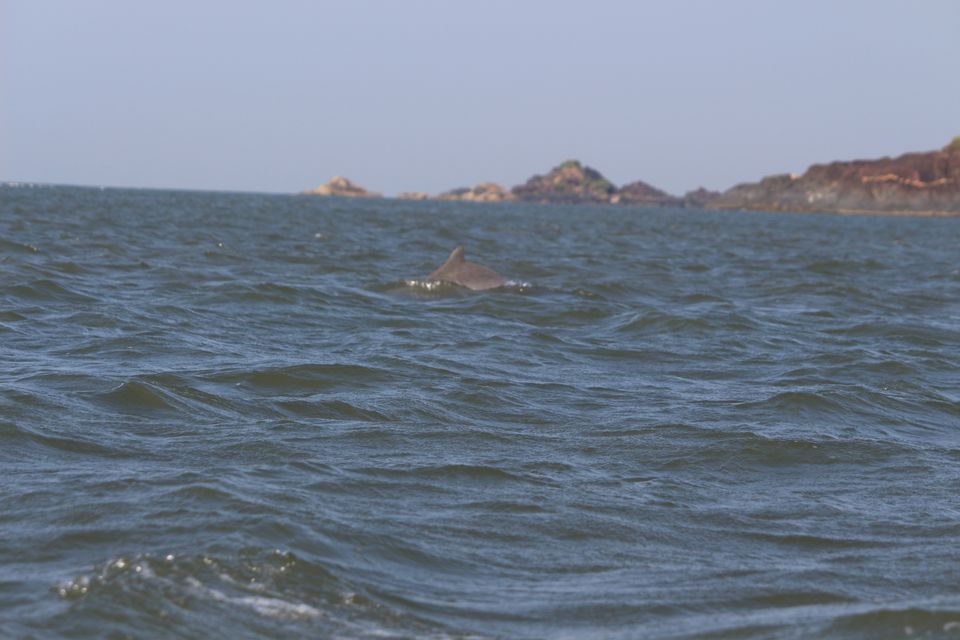 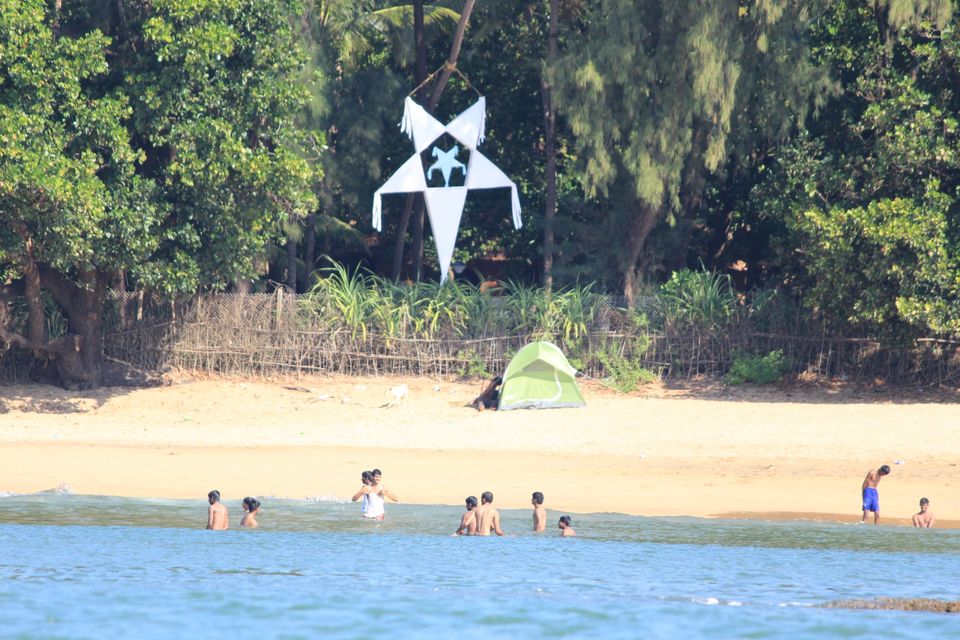 I will be back. Soon. 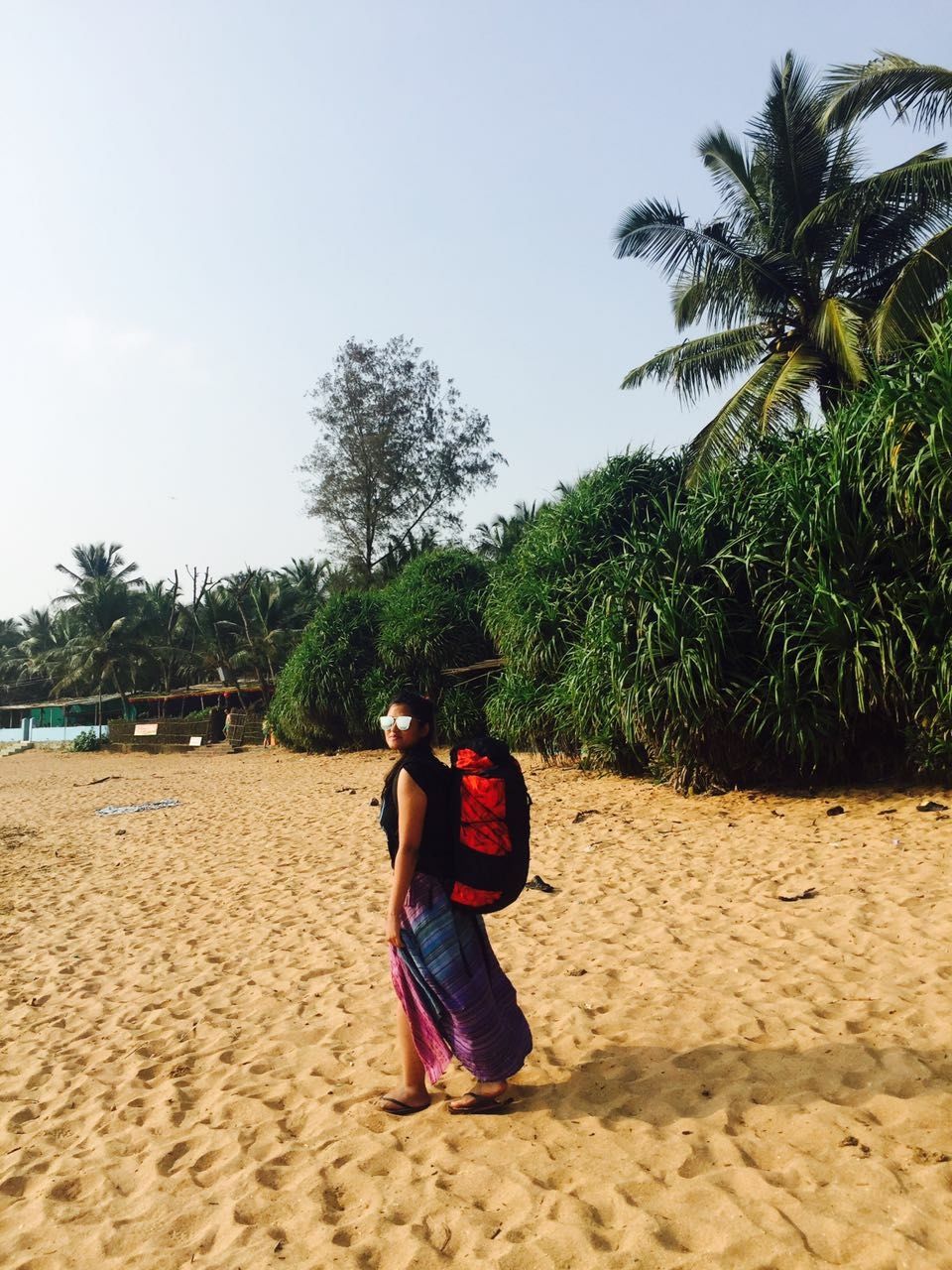 Just after the sun disappeared in Kudle. 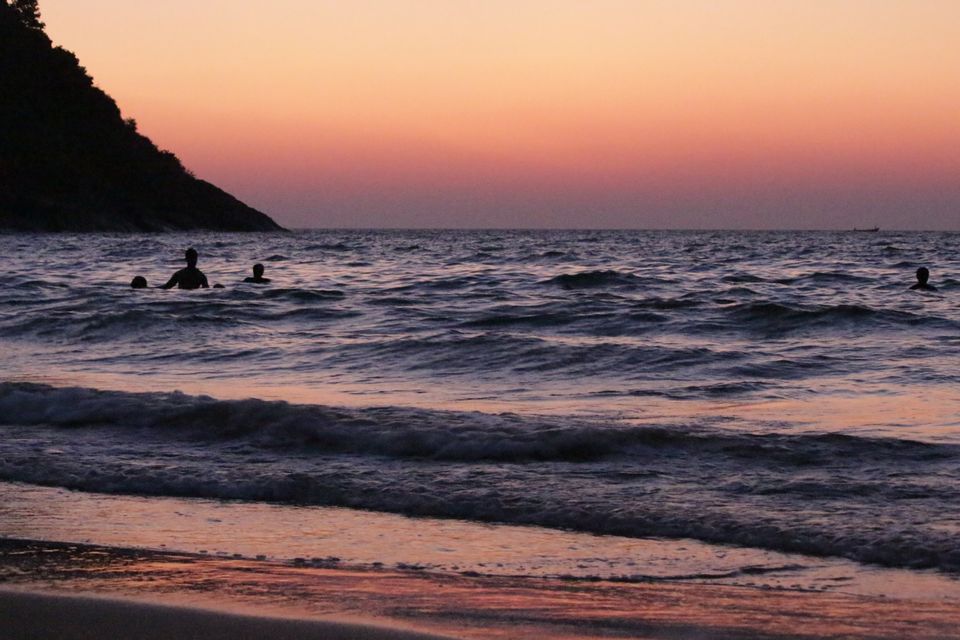 Boat ride from Half Moon to Kudle, via Om. 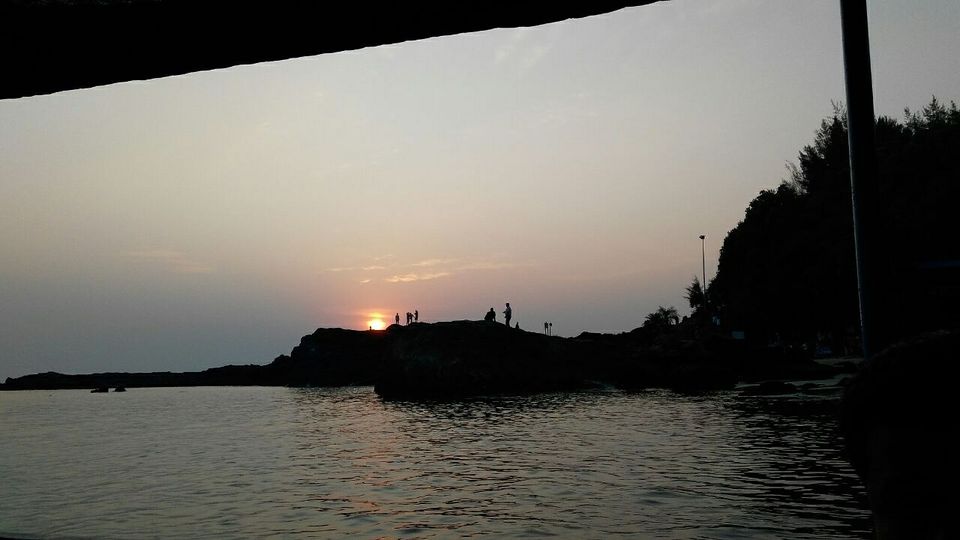 Do you see the mix of culture? 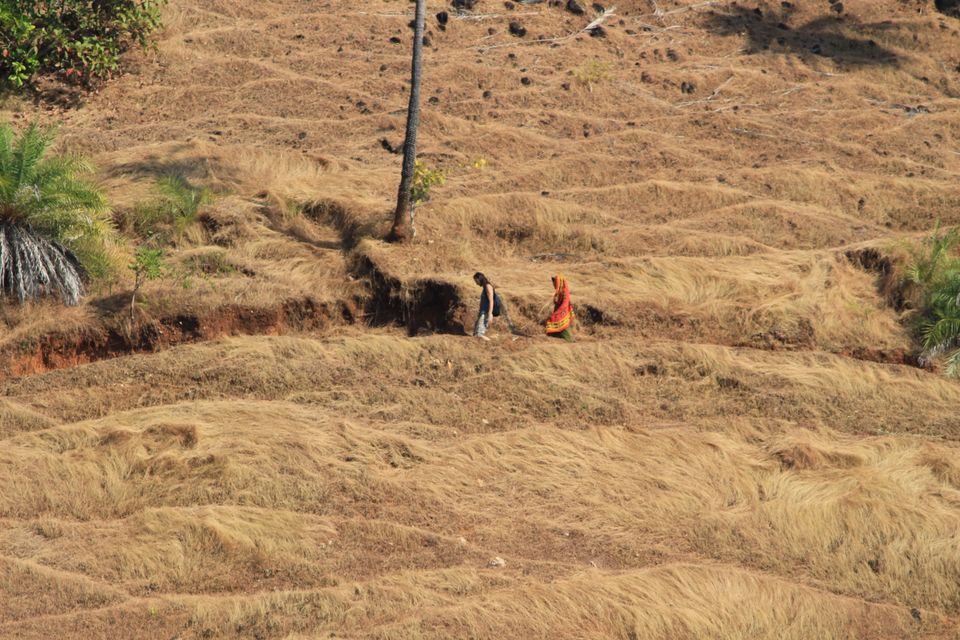 I can sit under these shacks for hours. 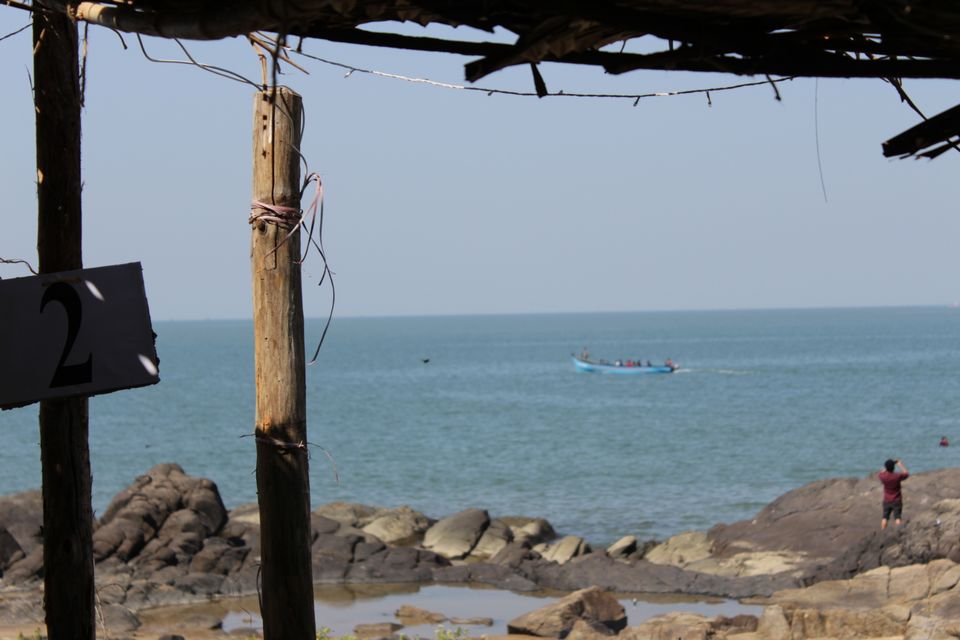 I go back there every time to witness more such happy faces. 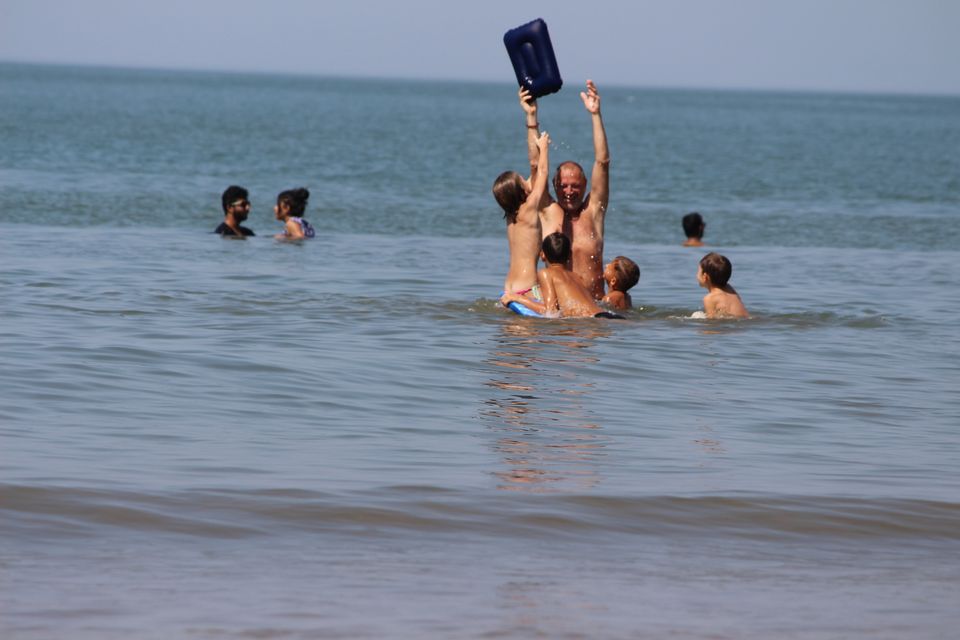 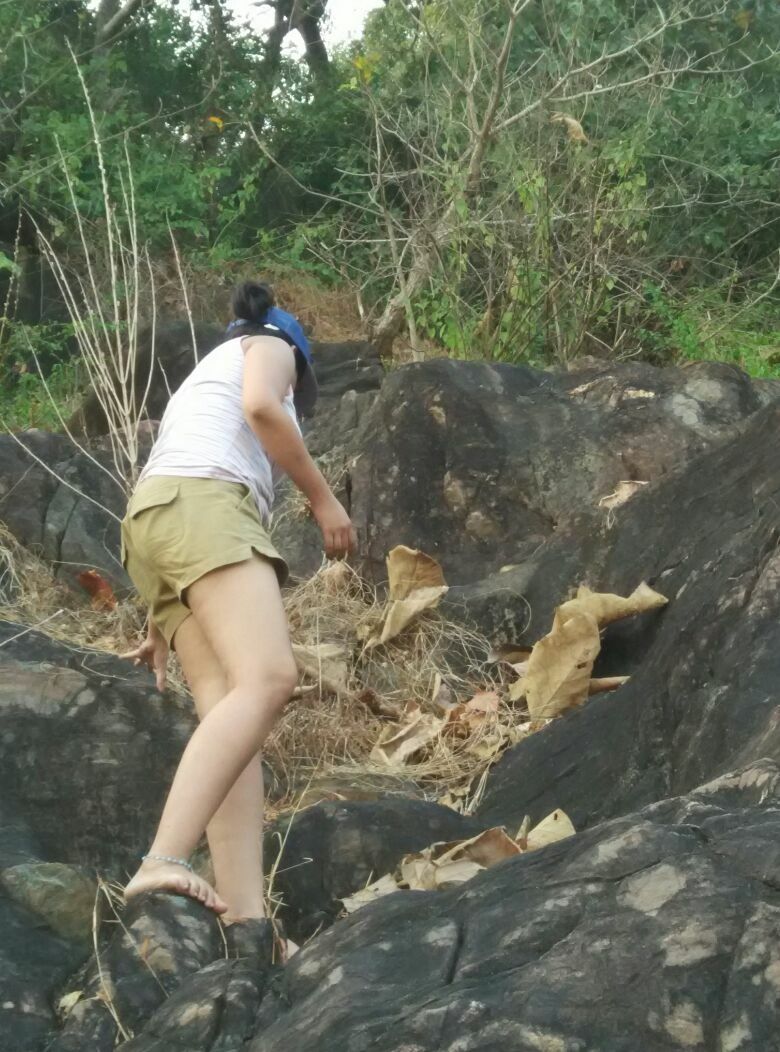 Bonfire by the beach a 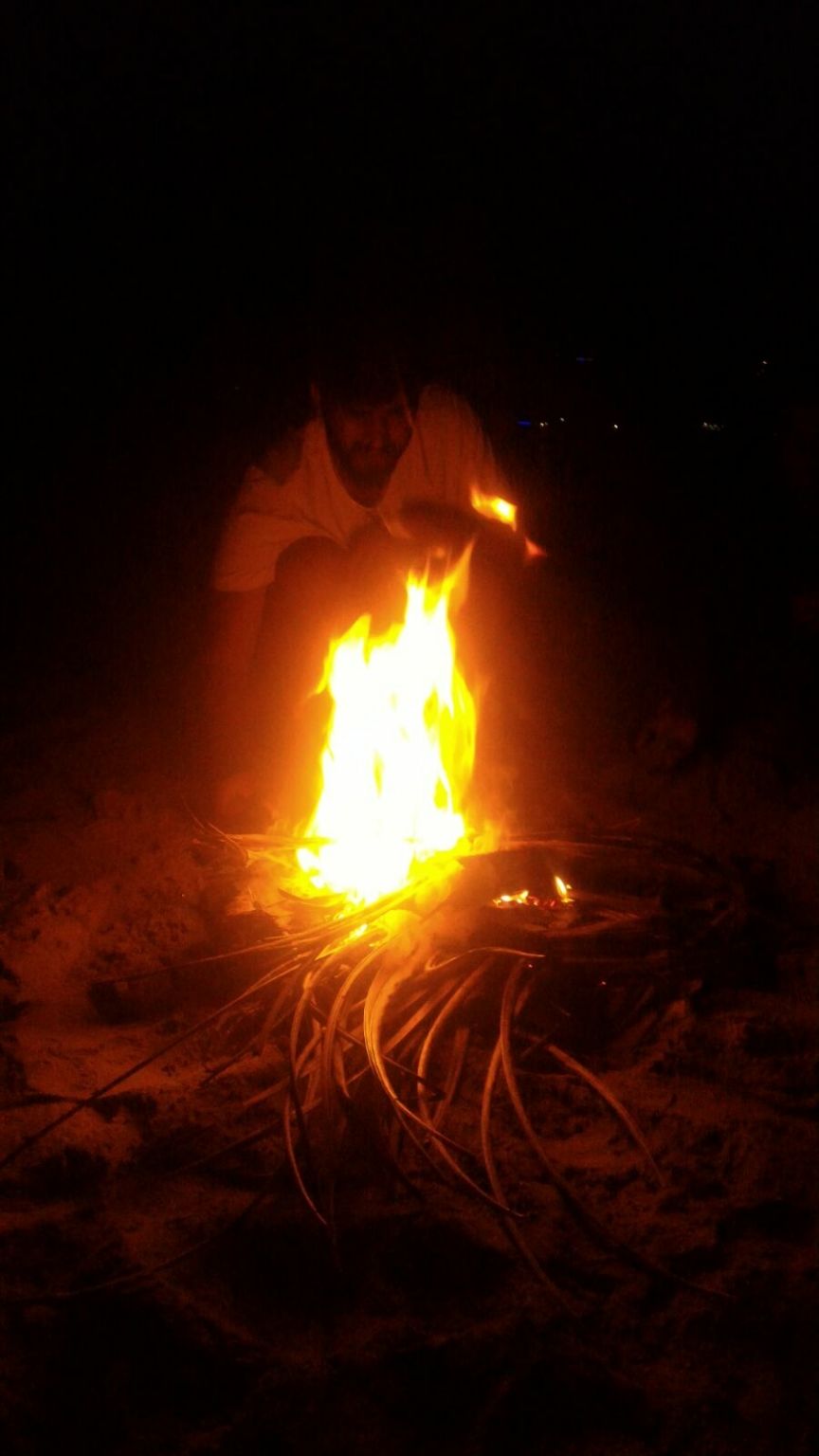 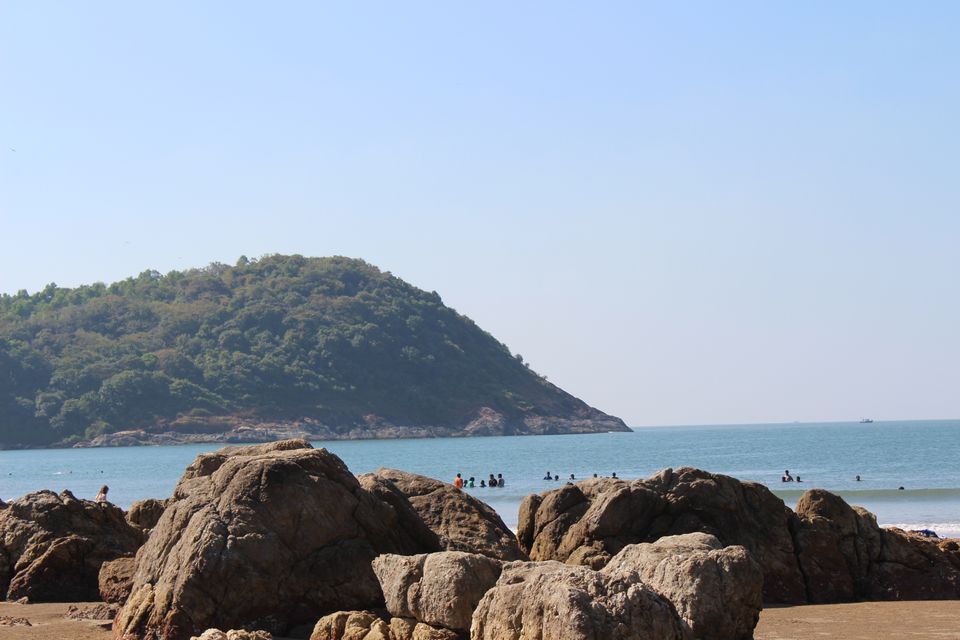 This is my comfort place. What's yours? 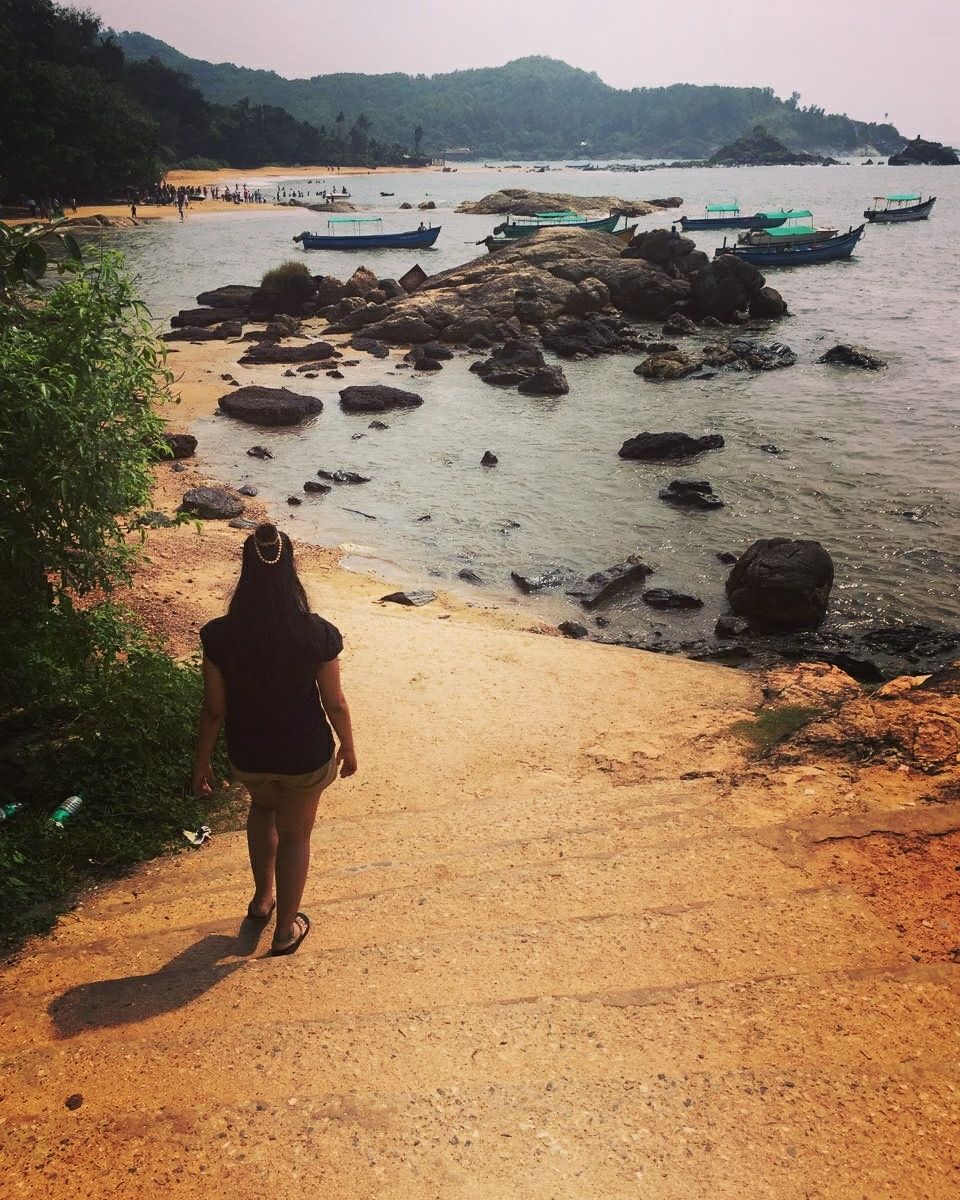 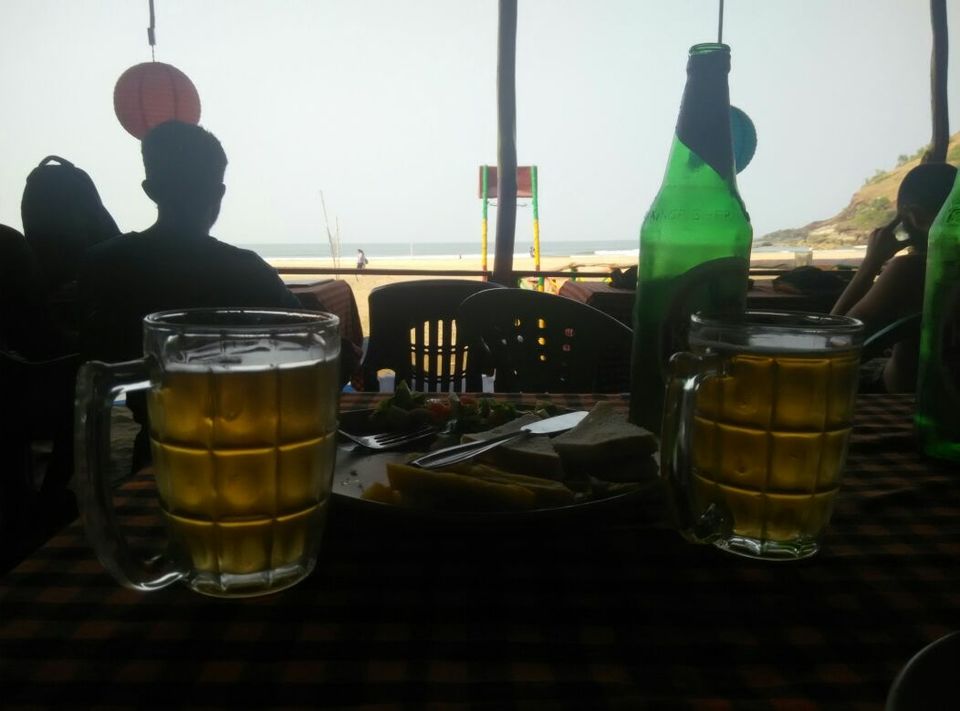 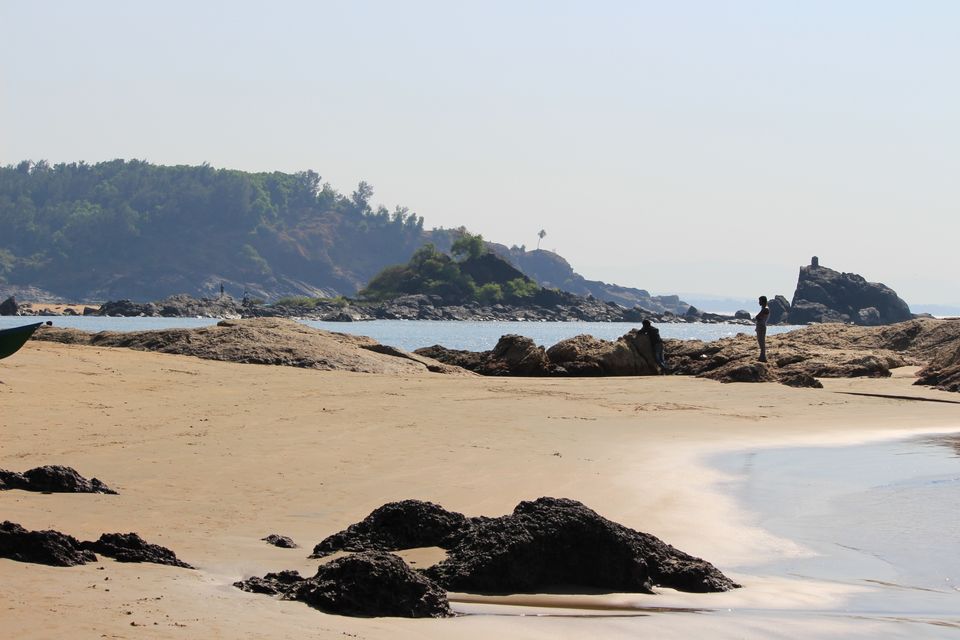