We started on August 15th morning from Bangalore.Our bus was booked from Majestic bus station to Kalasa(a holy temple-town located in Chikkamagaluru district in Karnataka) at 7.30 AM. But because of some local strike near Hassan, our bus was routed through a different route and this took time to reach Kalasa. We were delayed by 2 and half hours and reached there at 6PM. We had already booked our accomodation in a localite's house around 18kms from Kalasa in the foothills.It was a jumpy ride to our accomodation in a jeep.We reached there around 6.45 PM and received a warm welcome from our host with hot coffee and pakoras.The accomodation was in a awesome location surrounded by forests and mountains.The host had arranged a guide for our trek the next day to Kudremukh.

Next day i.e. August 16th, after having our breakfast, we headed for our exciting 9 Kms (one way) trek to Kudremukh accompanied by our guide.We had done a little study of this trek before coming and we were aware that this area is leech infected and there was possibilty of rain.So we were all geared up with ankle length socks and raincoats.We started the trek around 8.30 AM. The terrain was steep at some places and level in others. We had to cross several small streams on the way through the woods.We were giving repeated pitstops to refill our energy and also to capture the natural beauty with our lenses.We had reached halfway at 11.30 PM when some our friends gave up.Then 5 of us decided to complete the trek and we headed again for Kudremukh peak.The trek became tougher with swampy, sleepery and steep pathways through forest and streams.Finally after a great deal of effort we reached the topmost point of Kudremukh around 2.30 PM.

All of us really enjoyed the trek inspite of lot of hurdles. The rich flora and fauna of Kudremukh was really eye-catching. Will suggest everyone to trek these mountains at least once.

Last but not the least the hospitality shown by our host was really appreciable. 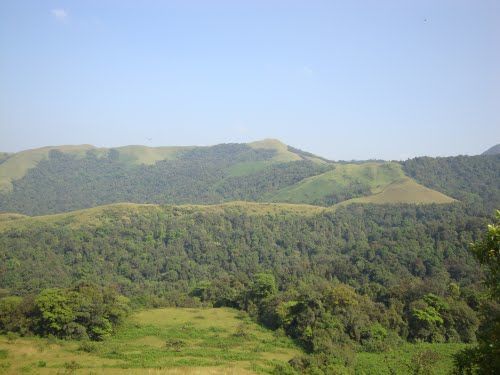