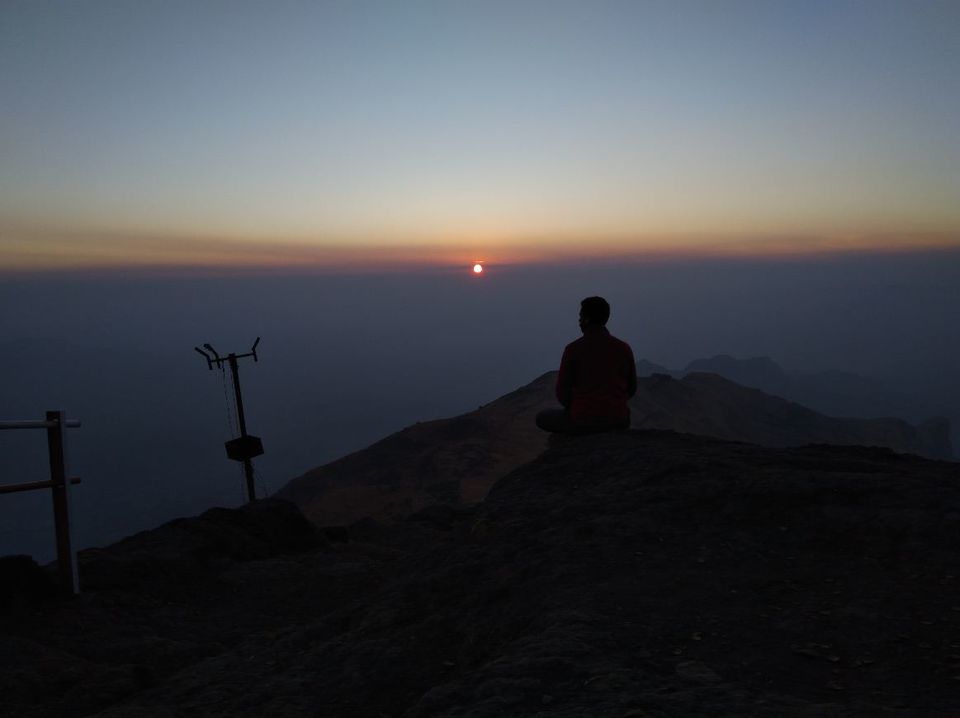 Kalsubai is a peak located in the Western Ghats, situated at a height of 5400 ft or 1646 meters. The mountain range lie within the perimeter of the Kalsubai Harishchandragad Wildlife Sanctuary carrying flora and fauna and not forget wilderness in abundance (I came across Bamboo Viper).

As the legend goes, Kalsubai was a lady who worked as a maid in one of the known families of the Indore village, located at the foothills of the peak. In-order to end her misery and the galling behaviour of her employer she escaped into the wilderness and settled at the top of the mountain. She was known to possess healing powers and the villagers often visited her to the top often concerning her with their ailments. After her time, a temple was constructed there in her fond memory and the peak came to be known as Kalsubai peak.

Here is one of the cheapest way to arrive at the destination.

If you are travelling from Mumbai you may catch a 16.52 CSMT-Kasara Local or a 18.25 CSMT-Kasara local. After that you’ll find difficulty in finding transport to the base village of Bari. (Ticket from CSMT to Kasara will cost you Rs 35)

So once you have reached Kasara, you’ll be hounded by the local taximen promising you to directly take to Bari Village which is approximately 50 Kms from Kasara Railway station. If you’re alone they may charge you exorbitantly, one reason for that would be because there won’t much travellers in that direction.

So its better to wait for the local bus to Bari which may come at around 20:30 at Kasara railway station. You may enquire at the local shops for the bus timings. It roughly takes around 2:00 hrs to reach the base village and the fare is Rs 70 per person.

Once you are at the base village you are all on your own, so would advice to visit the place at night only if you have prior knowledge about the place, though you may find local boys who would be more than happy to guide you at some charge.

You are advised to carry a torch, bottle of water, some food packets and glucose tablets. Also, it is recommended to wear good woolen cloths as the weather gets freezing on the top.

So we started at around 23:30 from the base village and it took as a while to reach the start of the mountain hike. Since it was two of us and our target was to reach the summit before sunrise we weren’t in much hurry.

In-order to reach the start point you may follow the trail/path and in-between you’ll require to cross a section which usually in monsoon is a flooded river, other times it’s just a normal path with marginal water on either sides.

Sometimes you may find multiple routes, majority of which will lead to the same path going ahead, so not worry much about which routes to follow.

We started our hike at around 00:00 hrs from the start point, and hiked our way through the forests and rocky climbs. The hike isn’t easy and gets very steep at numerous points. There are various checkpoints in between which is in an indicator that you are moving in the right direction and further it acts as a rest place also.

After climbing for while we decided to rest since we had considerable time ahead of us. Listening to the wilderness we sat there with the moon above us being the only other witness to the beauty of the nightlife. We were the only hikers that night, so it didn’t take us long to dose off in that kind of ecosystem.

So 30-45 minutes odd break and we were ready to go again. So we started to ascend again at around 2:30 in the morning with the temperature slowly dipping for good. You’ll find ladders at various points which have broken hand rails. These ladders are supposed to make your climb nothing but easier and convenient.

We reached the top after the climbing the final ladder at around 4:00 in the morning only to find we are the sole hikers at the top. It couldn’t have been more exciting and fun and not forget the weather; it was very windy and freezing out there (Two sweaters recommended if hiking in winter).

Since it was too early we took shelter underneath a rock and rested there until dawn which was at 6:00 AM.

6:00 AM and the view from 5,400 ft above was spectacular, with the majestic Sahyadari ranges spread out in grandiose.

You would be standing at the highest peak of Maharashtra witnessing the sun moon and sky blend in perfectly to give you the most perfect view you would ever like to see. Towards West Alangad, Madangad & Kulanggad could be seen and towards south is the famous Bhandardhara Lake beautifully spread out wide.

Viewing the sunrise from the top is magical and one need to witness it first hand in-order understand its true nature and essence. The first rays of the sun create the most beautiful landscape one’s eyes would ever see and not to forget the warmth it brings with it.

You can sit there and view the endless trail of mountain until your bones start to feel the chill.

7:00 AM and we felt the need to descended back and started back with the view and lots of moments in our head.

Descending back isn’t a difficult task as compared to the hike, you’ll find numerous shops would have opened by then, where you can rest and have some breakfast or tea.

Finding transport from the village to Kasara Station is easy. You’ll find numerous sharing jeeps and buses running along the route. You may suite any of the above according to your convenience.