Hornbill Festival: An Experience to Relive

The year 2013 was one of the most craziest and eventful years of my life. It was a perfect blend of many picture perfect moments with a number of unfortunate events. Let’s keep the awful incidents apart, which can be discussed later. But, the momentous time I had, was something that will be cherished throughout and I’m sure that it will bring a beatific smile whenever I’ll remember those moments. It came as a windfall to my boring life, when my friend offered me to accompany him for a documentary based on Rock n Roll. Though, I am an ardent fan of this genre of music, yet I didn’t know much about it. Moreover, digging about Rock n Roll in India was far more enticing and thus, without thinking about anything I agreed to be a part of the mission. We toured almost the entire country and met around forty musicians, who actually started the Rock n Roll revolution in India.

Since it will take a lot of time to give you a picture of all the events happened during the journey, which I’ll eventually pen down in coming days, yet right now I’m trying to jot down my experience during the “Hornbill Festival”. It was an experience of a lifetime and I was on cloud nine because attending this festival was in my bucket list, ever since it started in the year 2000. However, due to various hindrances, I could not make it. So, this time I was heading towards realising my dream. 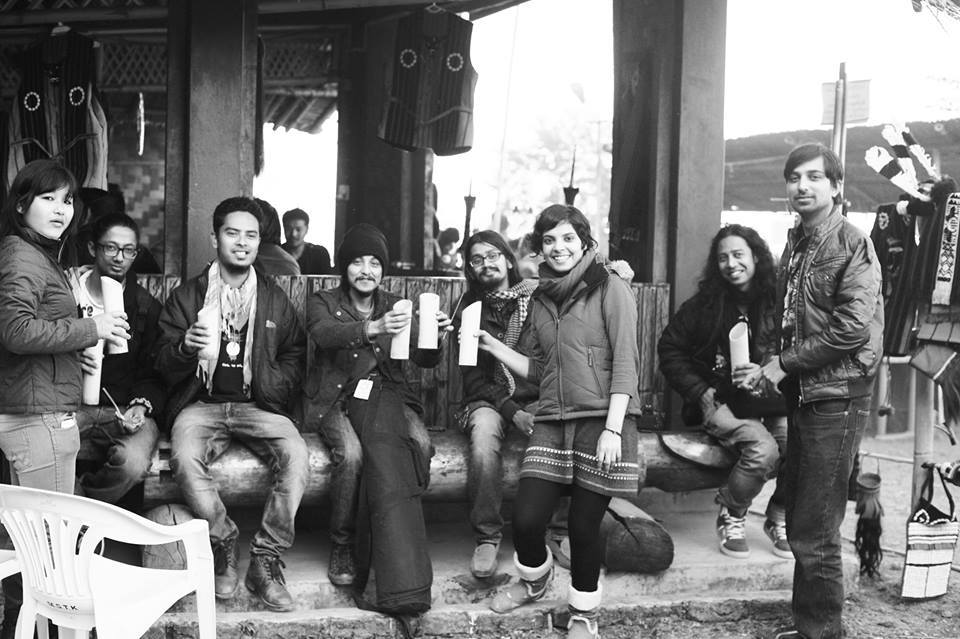 Although, the road from Dimapur to Kohima was rocky and awful, yet the excitement of being at the coveted festival eliminated all the exhaustion. Moreover, the picturesque surrounding and the affable behaviour of the people of Kohima gave me an inexplicable feeling. Organised by the State Directorate of Tourism of Nagaland, the festival greets and embraces everyone to this beautiful place called Kohima, the capital of Nagaland. I was shocked to see that despite the rumours of being a disturbed state, people from all around the country flock to this city to get an overwhelming experience. Adorned with lights and several events happening simultaneously, the city becomes nothing lesser than a paradise on earth during the festival. You cannot deny the fact that December is considered to be the most happening month of the year and if you are in Kohima during this time, you are at the right place to have some wonderful moments to cherish.

Regarded as the biggest festival in the North Eastern part of the country, it stood upright to prove its significance ever since its inception and has always been a pride for the people of the region. Though, our motive was to shoot the Rock Concert, which is a part of the festival, but could not restrain ourselves to indulge in the Naga way of blissful and happy life. It was a proud moment for the people of the region as the state of Nagaland was celebrating its fifty years of statehood and thus the festival was celebrated for ten days instead of the normal seven day schedule.

Kisama, the Naga Heritage Village, which hosts the main festival, is well maintained and the scenic beauty around the area is breathtaking. With different stalls offering "Zothu” and "Thutse" (local alcoholic beverages made of rice) and the authentic food of the all the sixteen major tribes of Nagaland, Kisama offers a plethora of options for foodies and of course to bibulous like us. I visited all the stalls in Kisama to pleasure my taste buds with various delectable authentic food items and also to keep my spirits high, “Zothu” was always there. The stalls in Kisama closed their affair by 6 in the evening; however the night did not get over so soon. The Rock Contest, the Music Festival, the Hornbill Night Bazaar and many other activities kept the nights alive and young.

The last day of the festival was more eventful as we all participated in the community dance where all the different tribes of the state unite and dance together. Since, we were there for the documentary shoot, after the celebration at Kisama, we had to rush to the Rock Contest Finale where ten bands got shortlisted from numerous bands, which came for audition from all across the country. That was the only time we were actually working apart from our extracurricular activities. It was fun, but to be frank, the result of the contest was unsatisfactory (*at least for me). Though the Rock Contest got over by 10 P.M., yet the night was still young and rocking. It was our last day in Kohima and we didn’t want to waste it at all. During our stay, we met some local guys and became friends, who took us to a party after the rock show. Dance to the tunes of the DJ or sit by the fire and enjoy some “Zothu”, it’s up to you. But I’m sure that if you were there, you would have had some amazing moments.

With so many events and activities, I was gearing myself up for the festive season to follow. It was my first experience and with my fingers crossed, I am looking forward to have some more enthralling moments in the years to come at the Hornbill Festival.