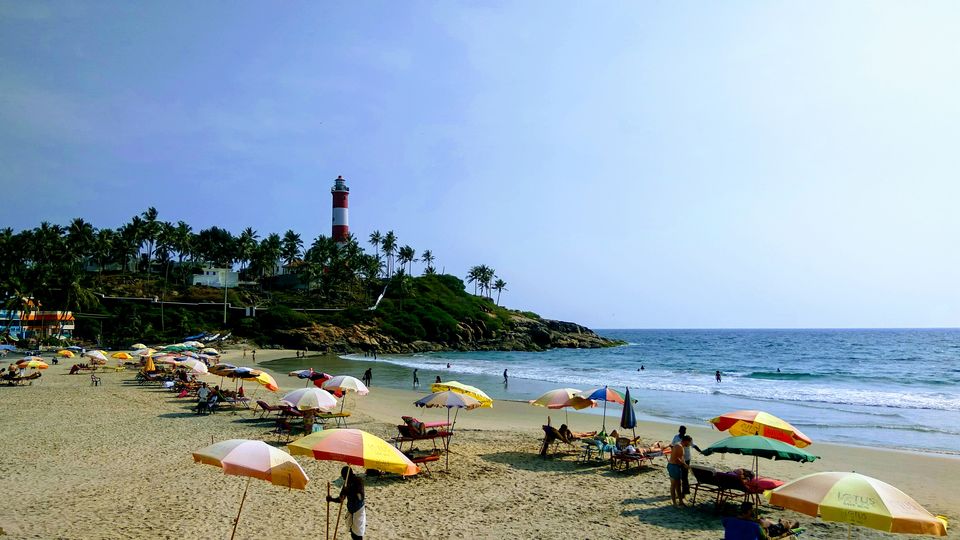 Like any new parents, I and my wife are also struggling to cope up with a new set of responsibilities. The tiring days and sleepless nights are certainly enough to decide not to go for any additional challenge. But, that is why it is a challenge, right! Though all the data points indicated to decide us not to go, we decided to travel this time, that too by train.

We were not sure if we would be able to go anywhere other than the nearest beach, but that should not stop me from planning!

Start on Friday afternoon from Bangalore to Kochuveli by trainReach Kochuveli by 10 am on SaturdayTake auto or cab from the railway station to hotel, Beatles InnSwimming at Lighthouse beachEat as much as seafood possibleRelaxVisit Hawah beach and Vizhinjam lighthouseVisit the following places, only if possibleStart back on Monday afternoon from Kochuveli to Bangalore by train

I have been to other parts of Kerala earlier, so kept this trip very focused to the beach, and if you are going with an infant, that is what is at most you can do. If this is not the case with you, there are also some other places nearby you can choose to visit,

We were travailing through train after a long time, and for our daughter, it was the first time. Tough the train was much cleaner than we expected, it reached 1.5 hr late at the destination.

Cab - After getting frustrated for 10-15 min, while the auto driver was trying all his tricks to start the auto back, I had to start searching for a cab. Uber was not available, and was charging out-of-station, but was lucky to get an Ola quickly, which took us to the hotel, ultimately.

The narrow path after the old wooden door took me to the stairs, those were going down, and then, wow, what a view! The stairs took a right turn and reached a white building, the hotel, built on the rocky slope. The hotel ends at a sharp cliff, a small rocky beach starts there, and the sea was smashing itself at those rocks! 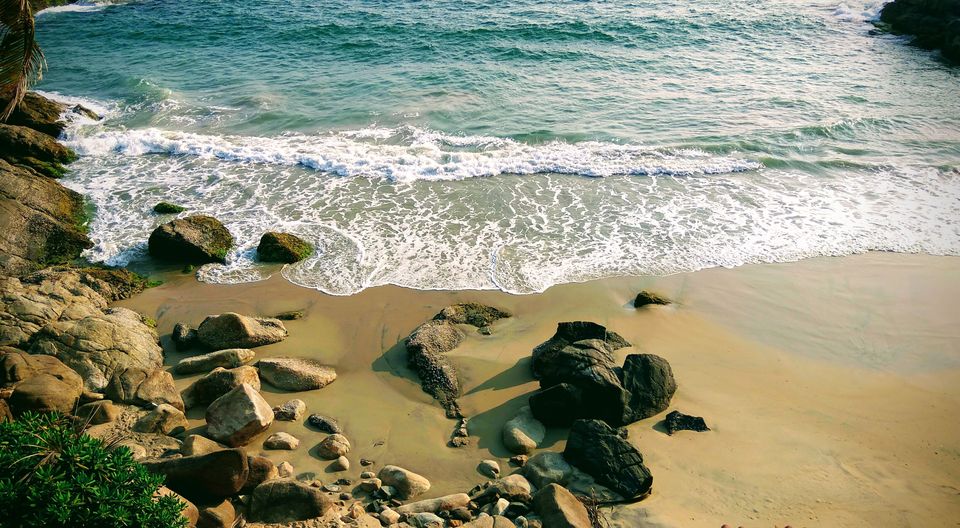 We had to go down the equivalent of 2 floors from the road to the reception and then 1 floor up to the room we booked. But for the view, we had from the room and the attached balcony, I can climb another 3 floors! This is the best view I ever had from my hotel room, and that comparison includes many beach hotels in India and abroad. 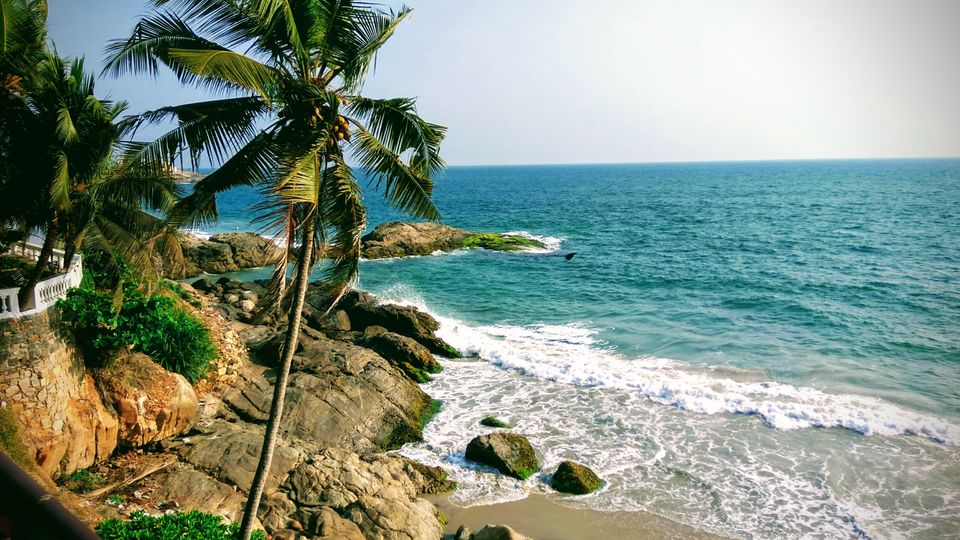 View from the room

A trip is an experience, and how it goes heavily depends on the quality of services you get. The service and behavior of the hotel owner and staff contributed very positively to that part. We got to use the kitchen to prepare food for our daughter. Got a big size ac room with a great view at a decent price. And also had complimentary continental breakfast at their restaurant Beatles Cafe at Lighthouse beach.

Note: This is an inn situated in hilly terrain. In case you are looking for a standard hotel type facility, and/or have a limitation on taking stairs or walking up/downhill, this might not be the best place for you. But, in case you are a 'traveler' type traveler, like us, this place will be great.

Whether it was swimming at the beach, or watching the setting sun, or having breakfast-lunch-dinner, or shopping or just relaxing at the beach, this is where we spent most of our time. From the hotel, it was just 2 minutes walking distance downhill. 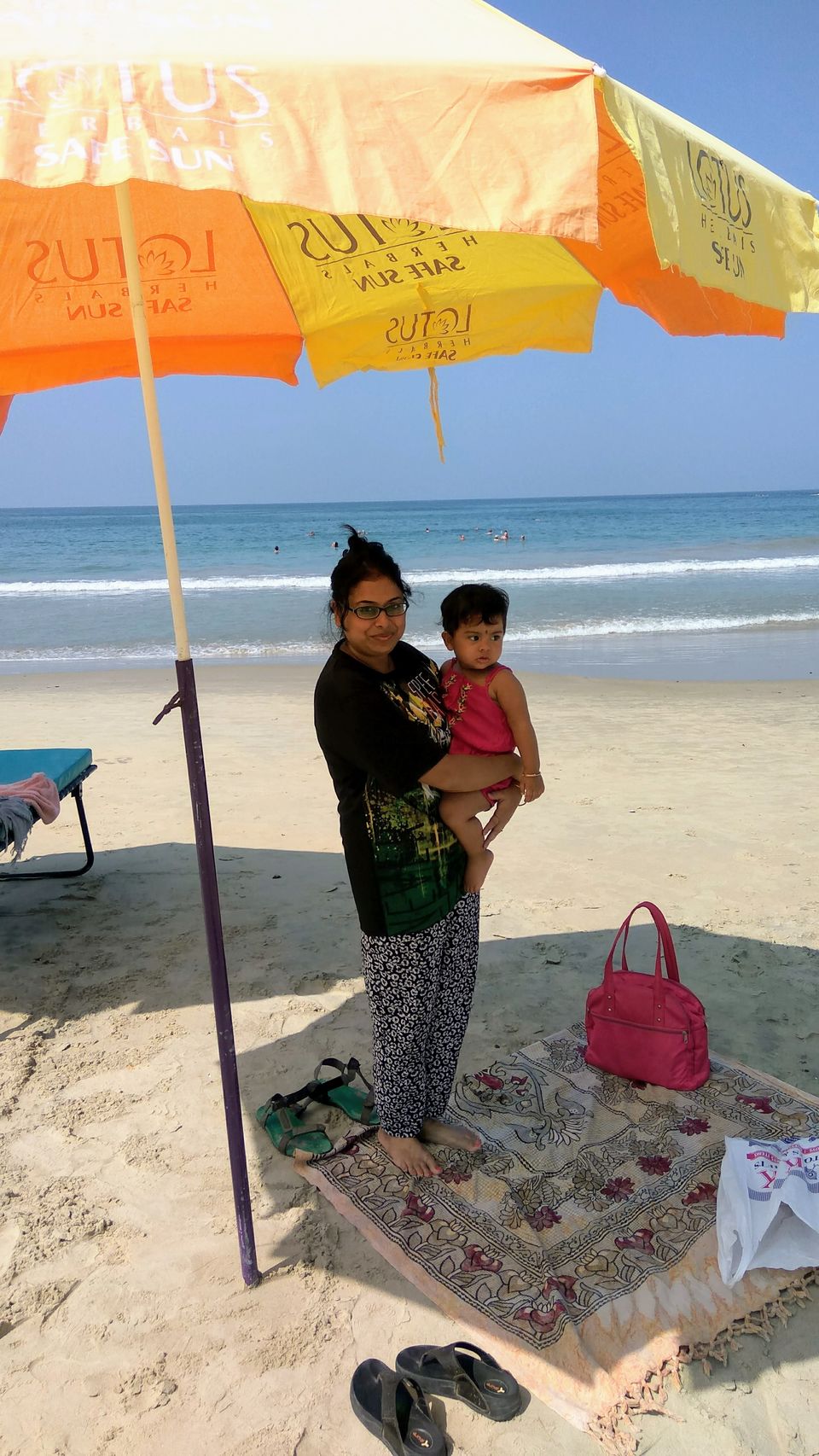 This is the southernmost beach of the 3 beaches Kovalam has. No doubt this is one of the most beautiful beaches in India mainland. Clean and fine sand, less number of seashells, clean water, a decent slope, and enjoyable waves make it great for swimming. The beach was not so crowded and was mostly foreigners. We rented an umbrella for 150 rupees to sit at the beach.

This was the first time the new members in our group was going to interact with salty water, and we both were eager and worried to see how that goes. Hopefully, the interaction went smooth and looks like our daughter also enjoyed at the edge of the water where she spent most of the time playing with wet sand. By now she learned, wet-sand doesn't taste good, neither feels smooth once rubbed on the face!

Swimming is always relaxing, that too in the sea with this amazing ambiance, kind of already made it worth taking all the effort and risk of having this trip. But you know what, sometimes in life, you get more than you feel contended about, and that is the food part here.

If you haven't understood yet, let me write it down, I am a foodie. A beach destination is obviously the best place to have fresh seafood. 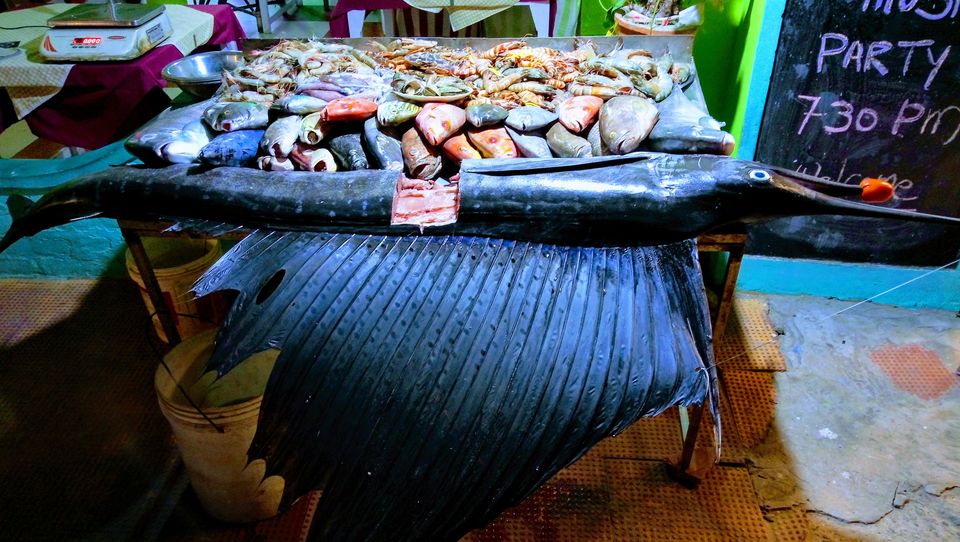 No, I haven't eaten all of those, but some of them for sure

The best part is, the spicy tasty mouth-watering food here served with the amazing view of the beach...

On a trip, we always wake up early, never waste time and try to explore as much as we can. But not this time. Relaxing was basically one of the most important parts and a reason for the trip. My wife wanted to relax in the hotel by sleeping, as long as our baby is asleep. And, I wanted to relax, sitting at the hotel balcony, swinging my legs out, just by looking at the smashing waves, thinking nothing, just nothing... 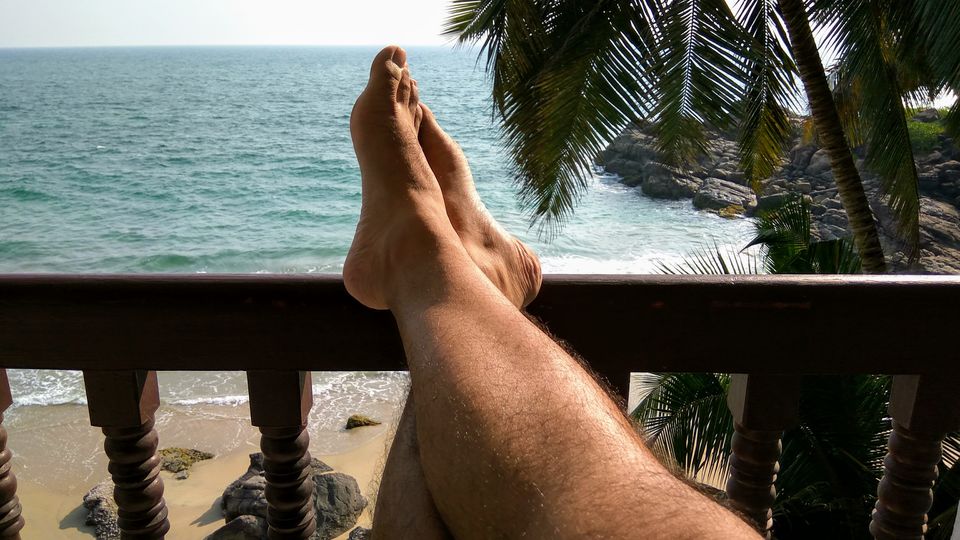 What about Hawah beach? -Yes, we went there for an afternoon and watched the sunset from there. It was more crowded, mostly with locals, making it not so clean and a lesser attractive one than Lighthouse beach. 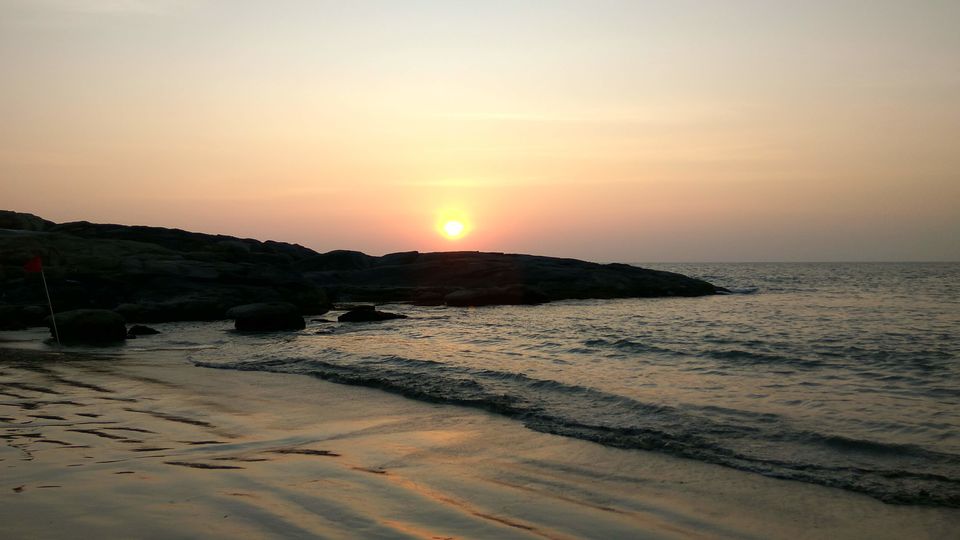 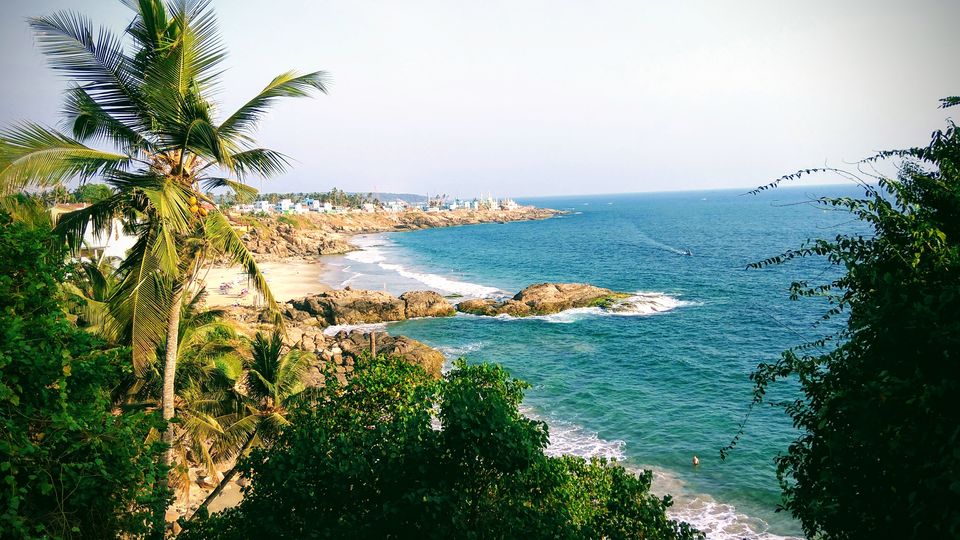 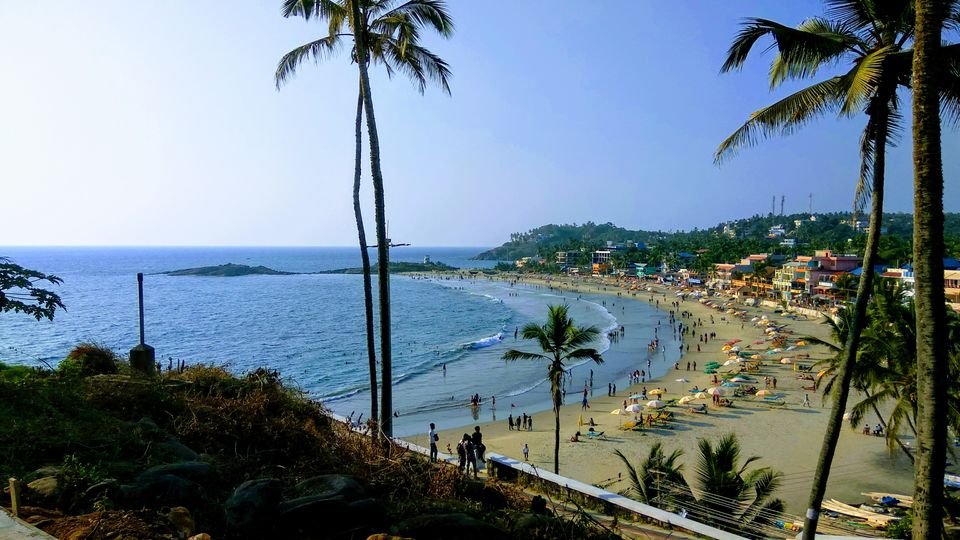 The southern side of the lighthouseLighthouse beach from the top 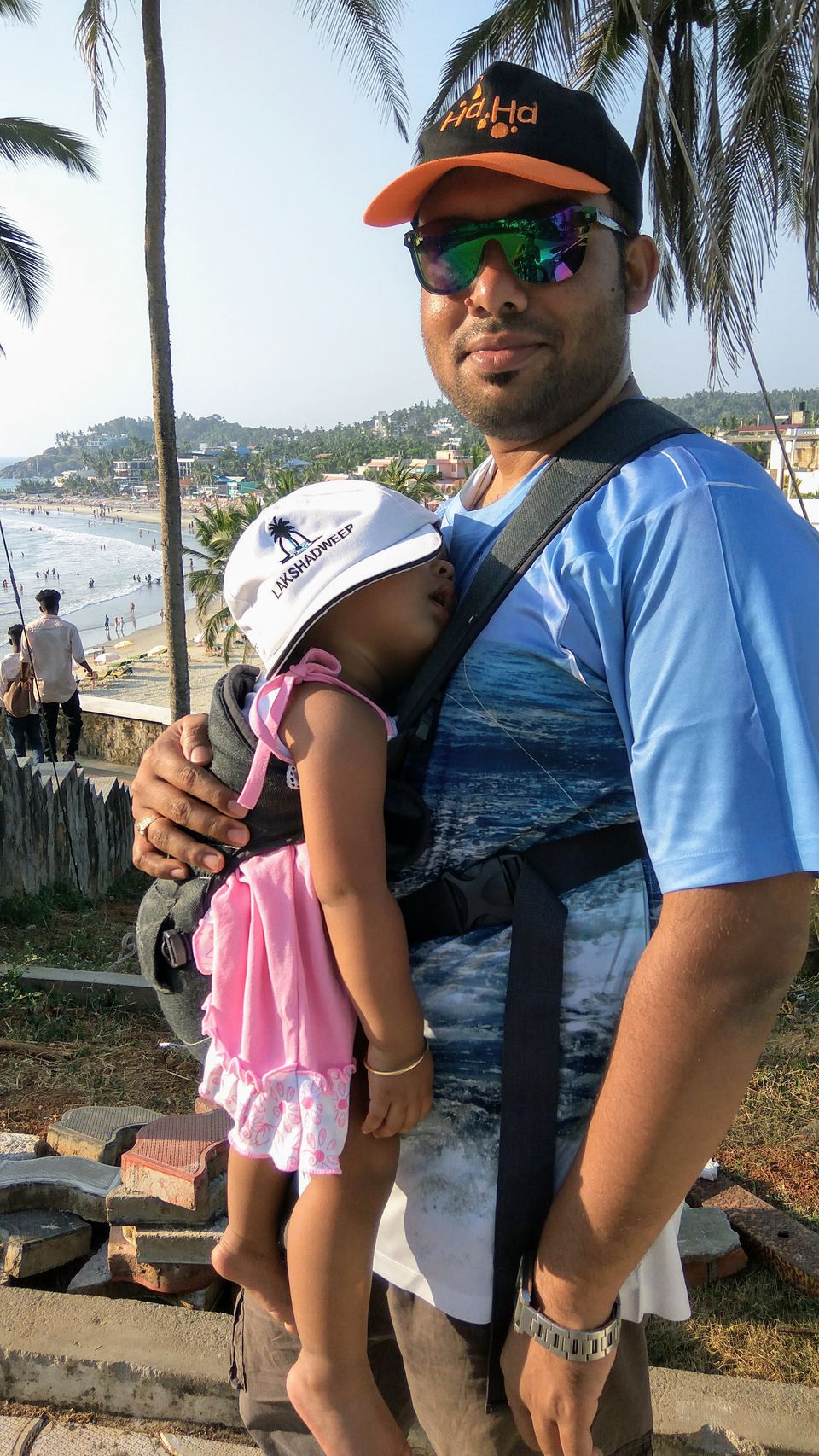 and for the record, a responsible father...