The sunny and vibrant town of Los Angeles attracts a number of dreamers each day, making it the second most populous city in the United States. Due to the rampant migration, this city has over the years seen a mashup of various cultures, people and cuisines. The people of L.A make it an interesting place. Usually originating from a range of places, they come to LA in search for opportunities to fulfill their dreams. The city has a lot of cool restaurants and cafe's along with certain landmarks that reflect its identity.

But, what is LA to a tourist or a traveler? I discovered that during one of my short trips to LA last June. I was in the city for the Gen beauty conference and had some time to explore the place. I decided to venture out in downtown Los Angeles. Downtown LA is mainly a Central Business District, adorned with skyscrapers, historic office districts and luxury apartments. While many view this part of the city as undesirable and even dangerous, I found it to be charming, sweet-smelling, and full of character.Here are my exciting 500 minutes spent in LA, where I stumbled upon many interesting parks, restaurants and more! I was especially exciting for the 'Angle's Knoll' where one of my favorite movies '500 days of summer' had been shot

This small yet chic restaurant serves delicious sandwiches and a wide variety of cocktails and craft beer. Motivated by hunger, I figured that I should probably grab a bite here. Their menu offers farm fresh organic dishes. Hidden in the much deserted downtown area, I was glad I came across this one. The restaurant gives out a casual ambiance yet serves some of the tastiest dishes. It also features a happy hour with gourmet choices and the waiters are friendly. I thoroughly enjoyed my meal, the cozy outdoor seating, and the extremely friendly staff. 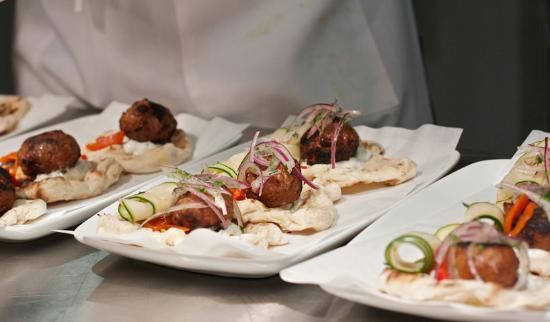 Situated in the heart of Downtown LA, this market opened in 1917 and has been operating since. The Grand Central Market has changed with the passing years. It has around 90-plus vendors selling a wide variety of products such as baked goods, coffee, cheese, etc. This historic landmark serves as a display of the cultural mix of cuisines in LA. It's 30,000 sq. ft. marketplace comprises of a food emporium and a retail marketplace. Sometimes public events are also held here. I walked through the market to feel the energy of the place and over zealously purchased a saccharine cup of iced coffee that I immediately swapped for a single origin brew from G&B Coffee. 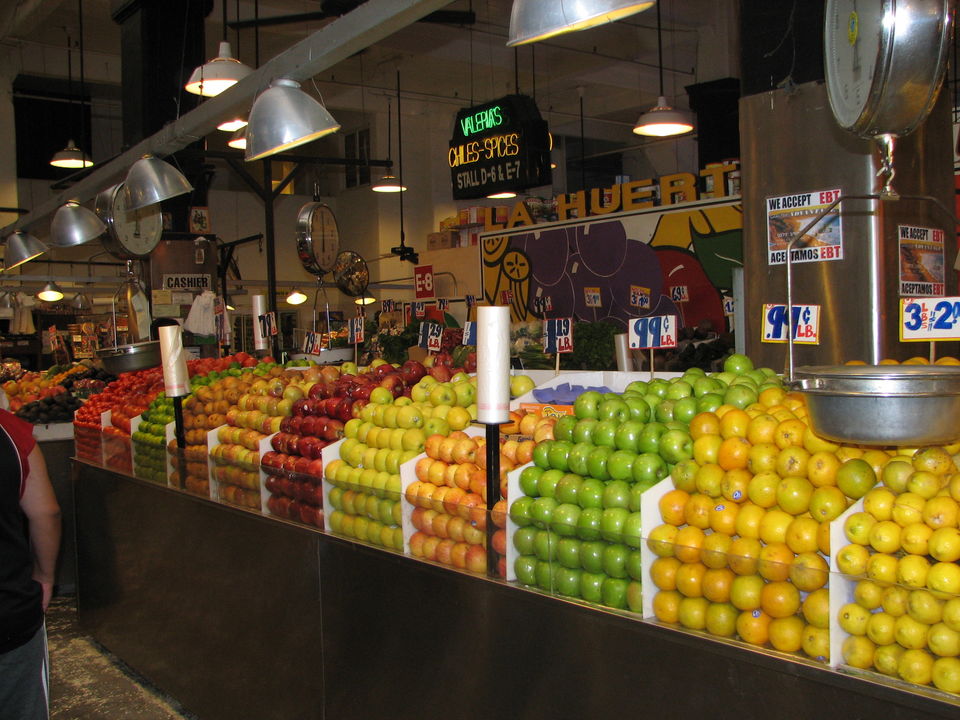 Later, I hurried across the street to glide up the shortest railroad in the world, Angel’s Flight. Built in 1901 as The Los Angeles Incline Railway, this place is a 298 foot-long funicular, bright and colorful part of Downtown LA. It begins at Hill Street and costs 50 cents one way. It's a nice experience to ride in this cable car, especially since it has been linked to the life of the people here for years now. It has two funicular cars- Sinai and Ovilet. This teeny tiny railway shuttled wealthy citizens in the then fashionable Bunker Hill neighborhood, up and down the steep slope between Hill and Olive streets. The ride obviously short, but provided a great view of the area, and I loved the adorable cars, ticket booth, and station. 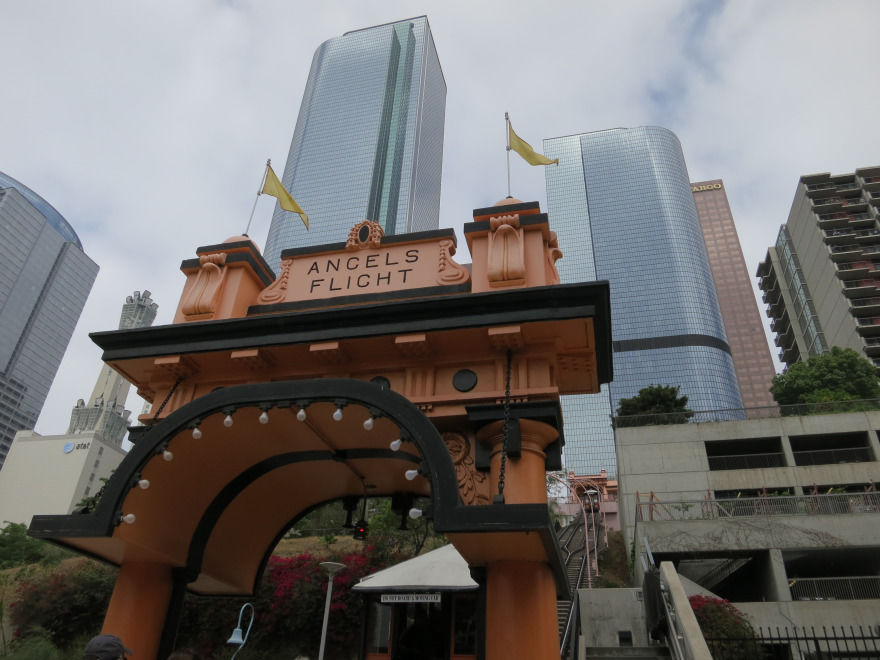 There was an adorable park located near the staircase to the right of the cars called Angel’s Knoll. I was lured by the sweet smell and gorgeous purple color of the Jacaranda trees, but was even more delighted to find out the park was a filming location for one my favorite movies, (500) Days of Summer. The park is pretty small, so finding the bench where Summer and Tom shared two important moments in the film wasn’t too difficult, but I asked for guidance from a park ranger nonetheless. This beautiful park gives a hill-side view of the high rises. Great place to sit back and relax. 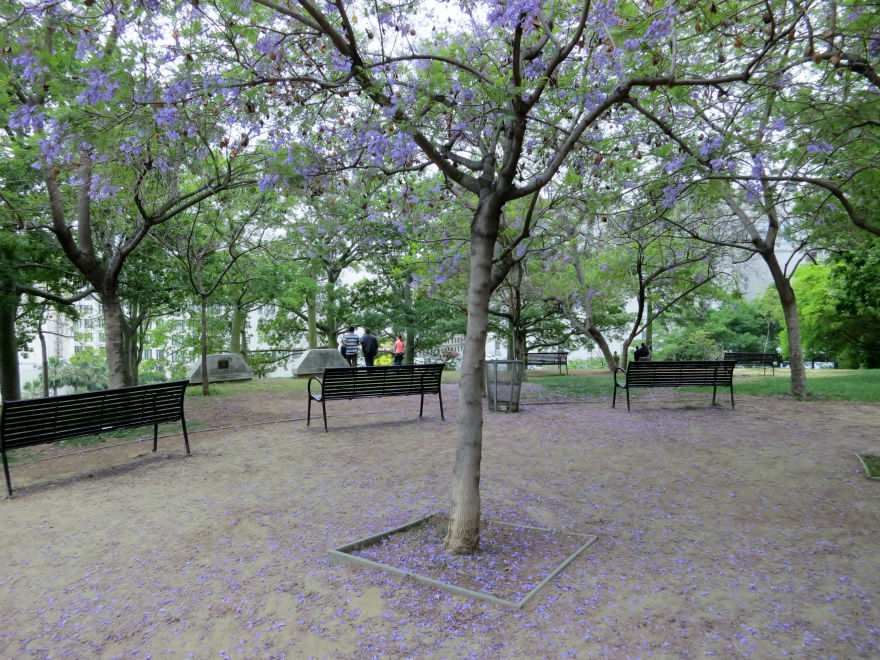 I ended my day with a quick bite from this lovely place right opposite the Standard Hotel. Essentially a bar, this is a nice and friendly place to hangout for a while. The bartender recommended their signature cheese fries that I paired with a summer wheat ale on the patio. The fries were good, but admittedly, smoked Gouda is not my favorite, so I would skip that next time and go straight for a beer. Their range of cocktails didn't look too bad either! 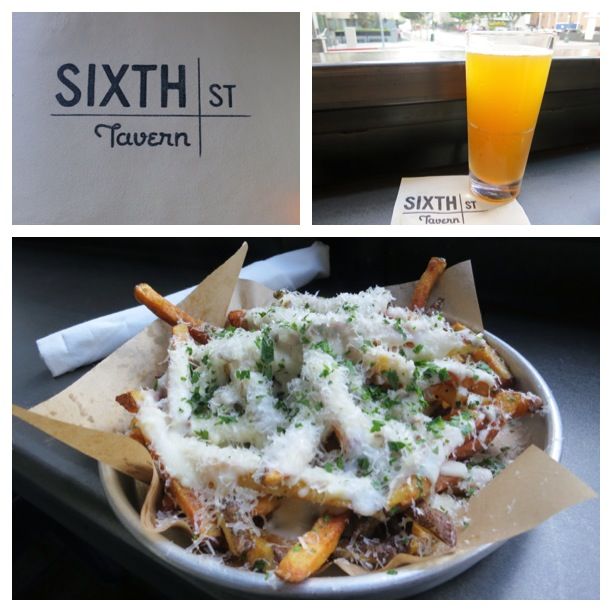