Everything You Need to Know About a Day Trip to Segovia 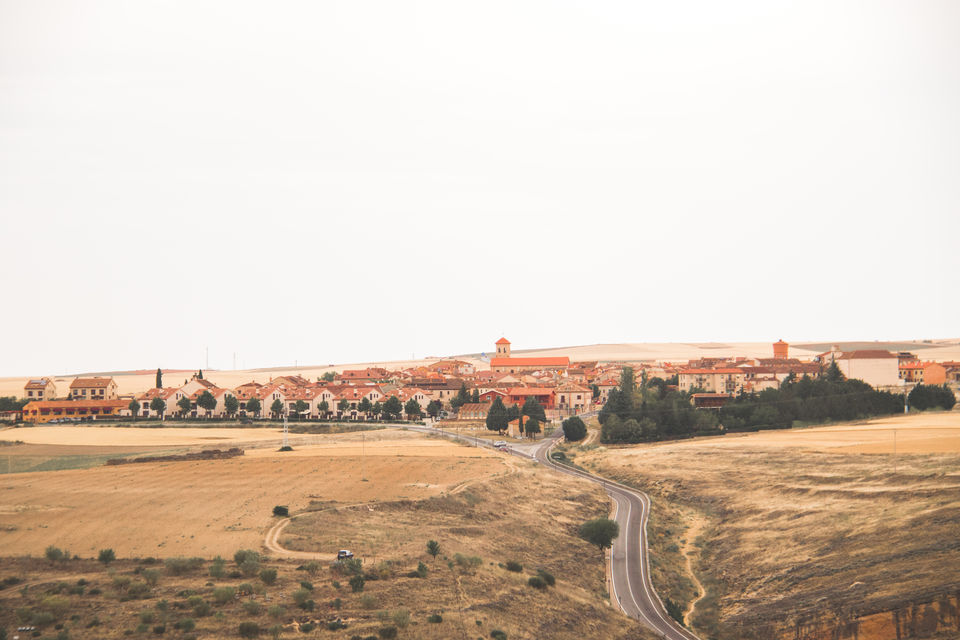 Segovia is just magical and it should definitely be on the list for anyone visiting Madrid. It is a cute little city with historic significance. It boasts of the 2000 year old Roman aqueduct (one of the best-preserved elevated Roman aqueducts), a beautiful cathedral and a fairy-tale castle, to name a few.

Segovia's steep and narrow cobblestone streets, combined with old buildings would definitely take you back in time. This city is seeped in history and culture, dating back to centuries. The beginnings of Segovia are also not known and the people are known to have populated the area before it was conquered by the Romans. 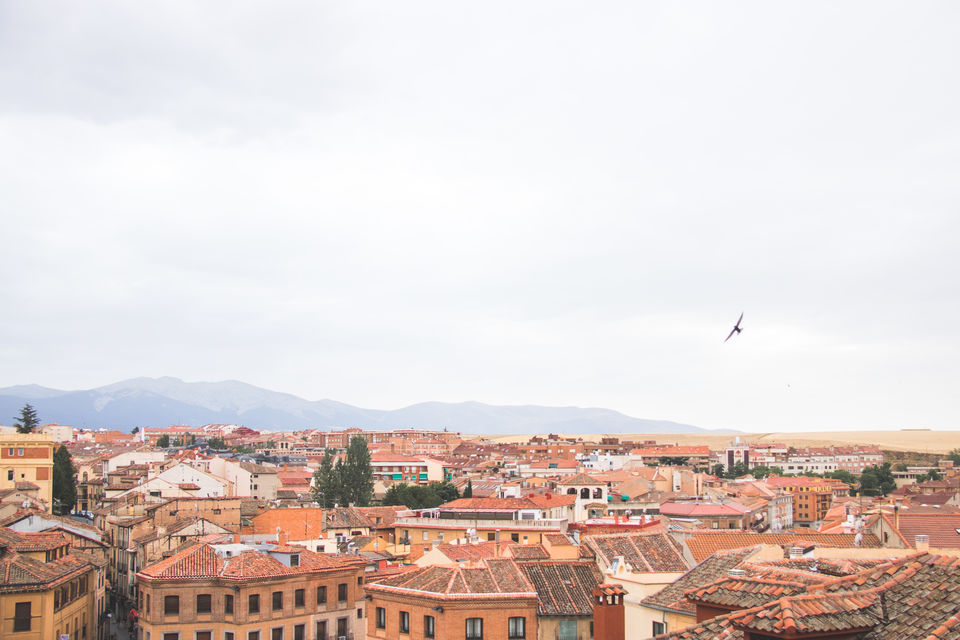 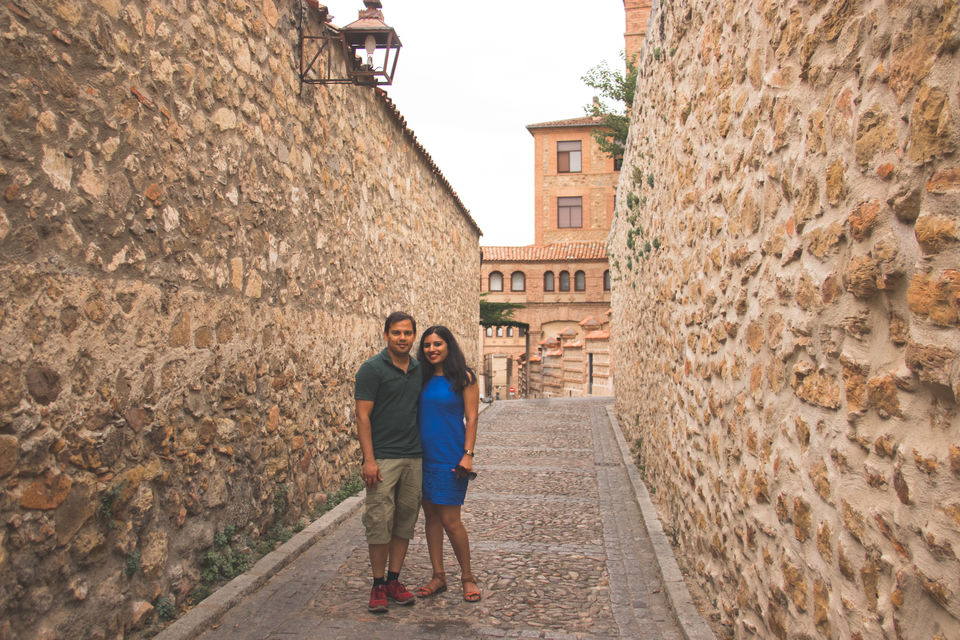 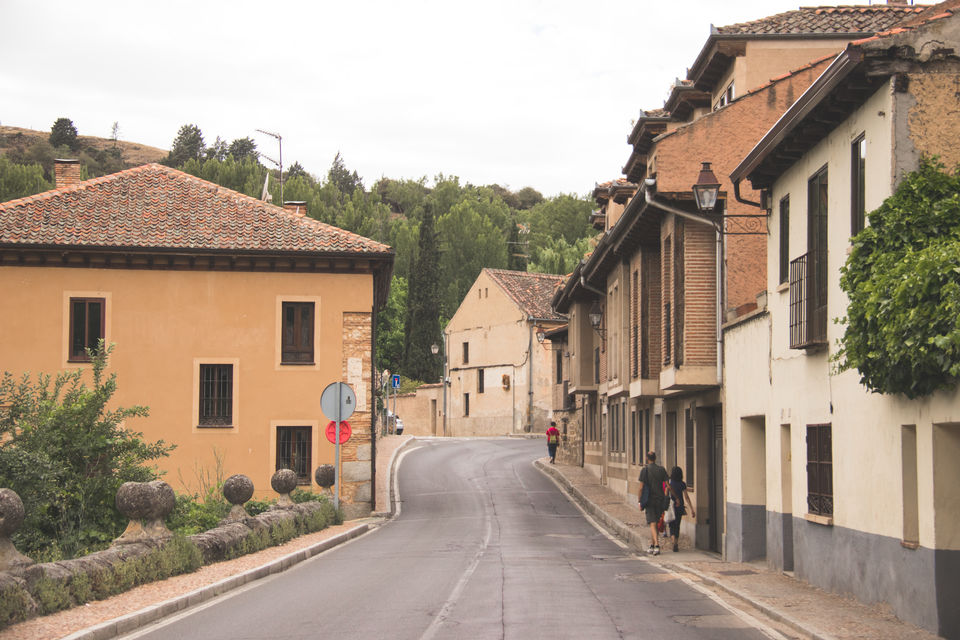 Definitely can't get better than this!! 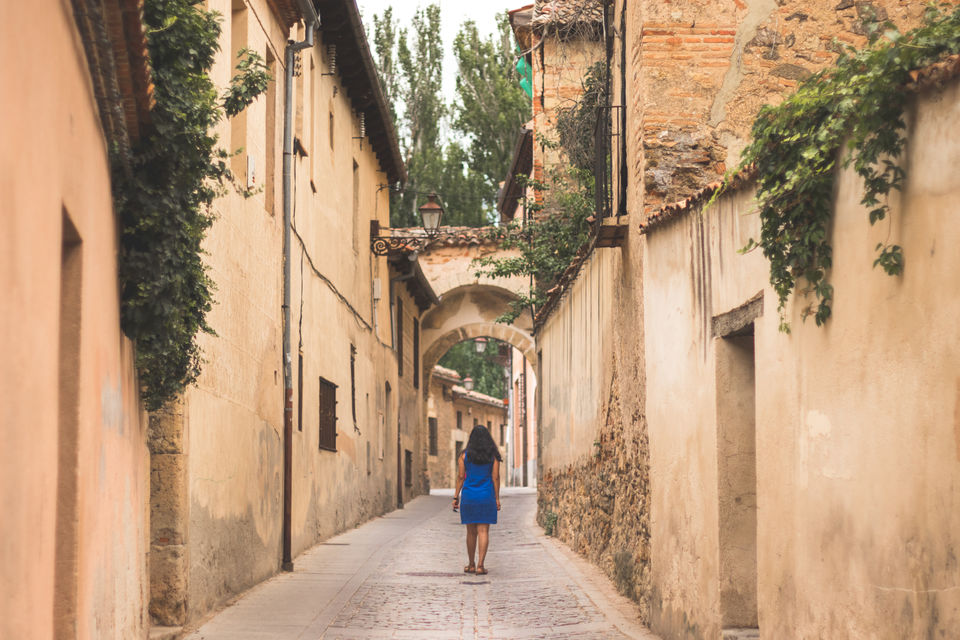 Segovia is very close to Madrid and can be easily reached via trains. It is just a 30 mins train ride from Madrid and there are many trains running between these cities throughout the day. Google maps won't show the right information about how to get there so here are our exclusive tips on reaching Segovia. The high speed trains run from Chamartín Station to Segovia AV Station and make sure to book tickets online as the tickets tend to sell out for the peak timings. Also take a print out of the ticket and if you could not do it, exchange it at the station before traveling as the authorities don't accept the e-tickets. We were lucky enough to be allowed to board the train just with an e-ticket and we were let off with a warning. We made sure to exchange it at the Segovia station while returning though.

Once you get off at Segovia station (which is in the middle of nowhere), there will be buses waiting to pick you up. The bus timings are synchronised with the train arrival so you don't need to be worried about missing the bus. Again, the bus driver doesn't accept higher denomination currency (anything above 10 euro), so carry coins. The ride costs 2 euro per person (at the time of this writing, June 2017) and hardly takes 15 mins to get to the city centre. Return journey is quite similar, there are buses running every 30 mins from the city to the train station.

Also Read: A day in the most Instagrammed village in Europe

You will be greeted by gorgeous architecture, as soon as you get down from the bus. 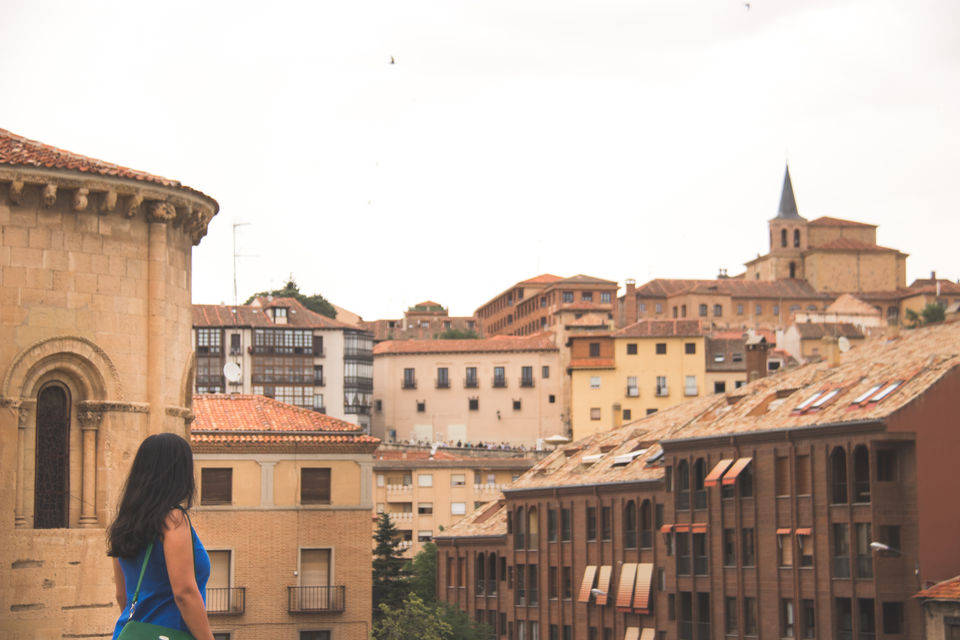 Open cafes and gorgeous streets, is what you will see everywhere.. 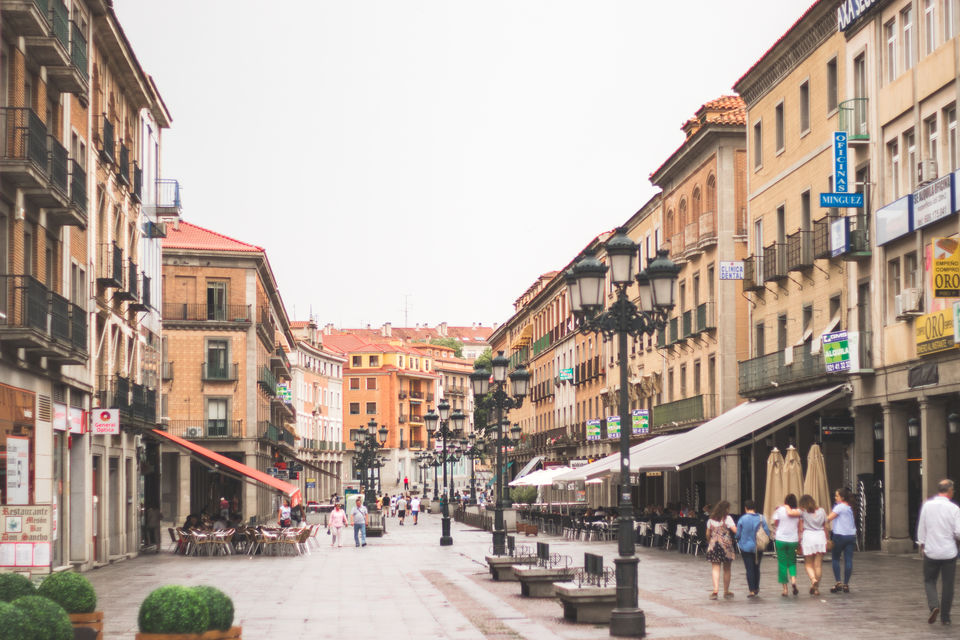 Visit the magnificent arches of the aqueduct. You are definitely bound to be thoroughly awe struck by the inspiring engineering. Even though you won't be able to see the actual aqueduct (it's concealed underneath), the incredible stonework has stood the test of time. As there are no inscriptions, the date of construction cannot be definitively determined and it was thought to have been constructed during the 1st century AD. The aqueduct once transported water from the nearby river, situated in the mountains 17 kms from the city. It runs 15 km (9.3 mi) before arriving in the city.

Also read: How to explore this cute little place called Bruges in Belgium

Aqueduct of Segovia.. The architecture will sure amaze you.. 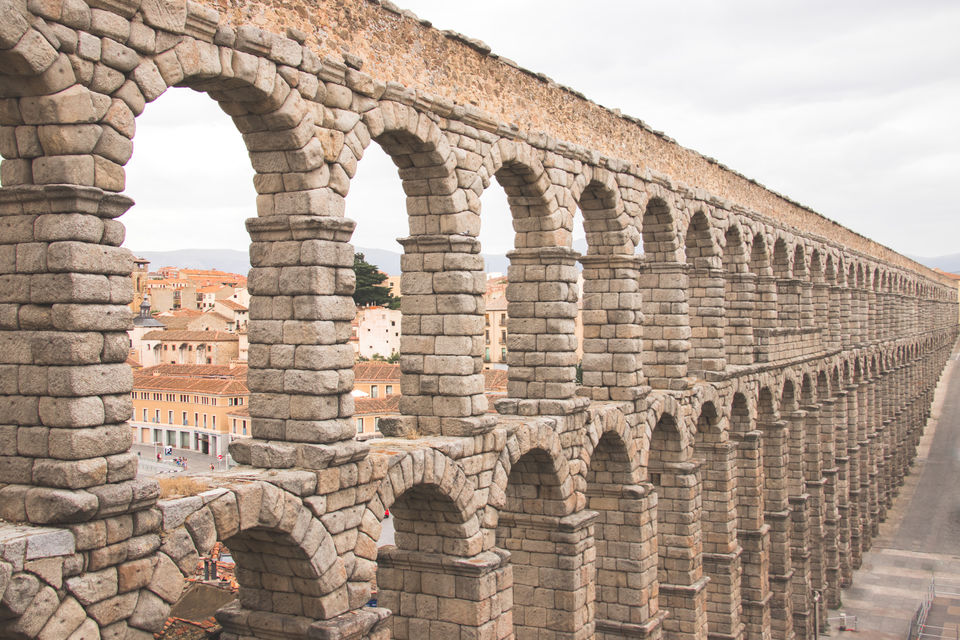 And the views are mindblowing.. 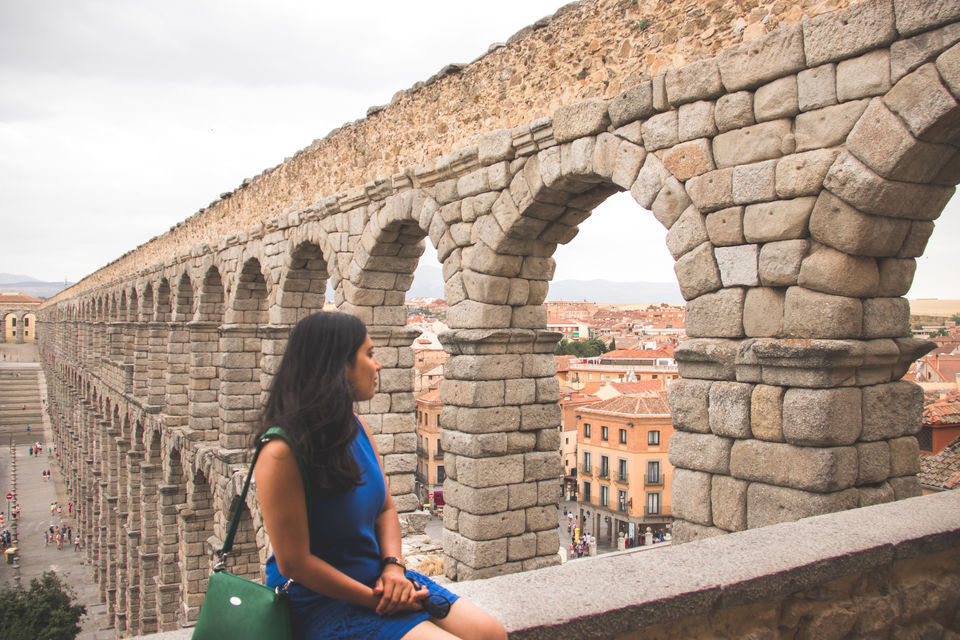 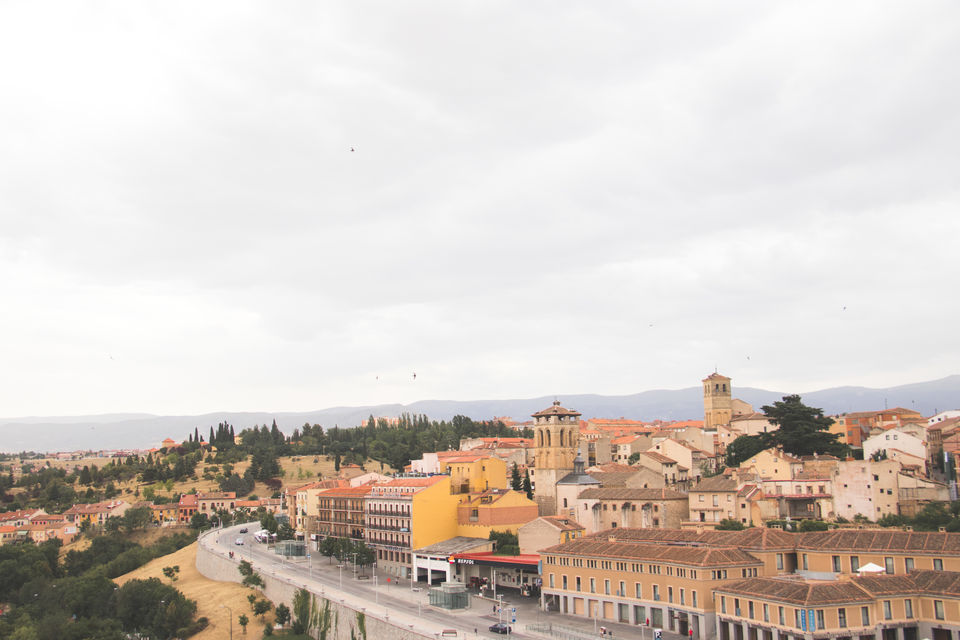 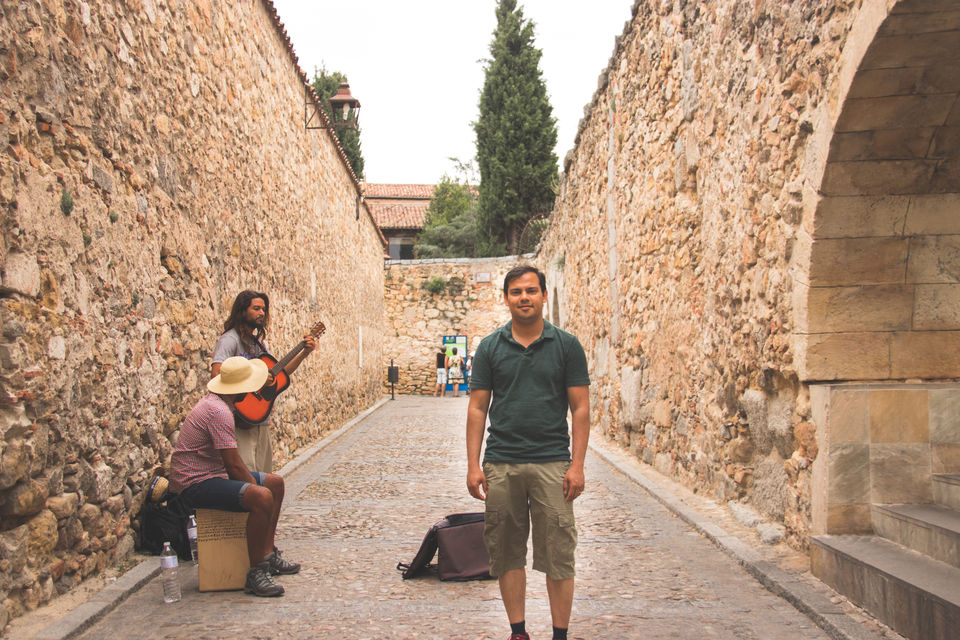 This is the main square and there are many restaurants and bars around this place. Grab some lunch, a drink, find an outside seating, make yourself comfortable and watch the buzzing square and the people walking through it. The location is dominated by the Segovia Cathedral and it's mind blowing architecture is a must see for anyone visiting Segovia.It was built in the mid 16th century in Gothic style and is dedicated to the Virgin Mary.

Segovia Cathedral.. We definitely haven't seen such gorgeous architecture before.. 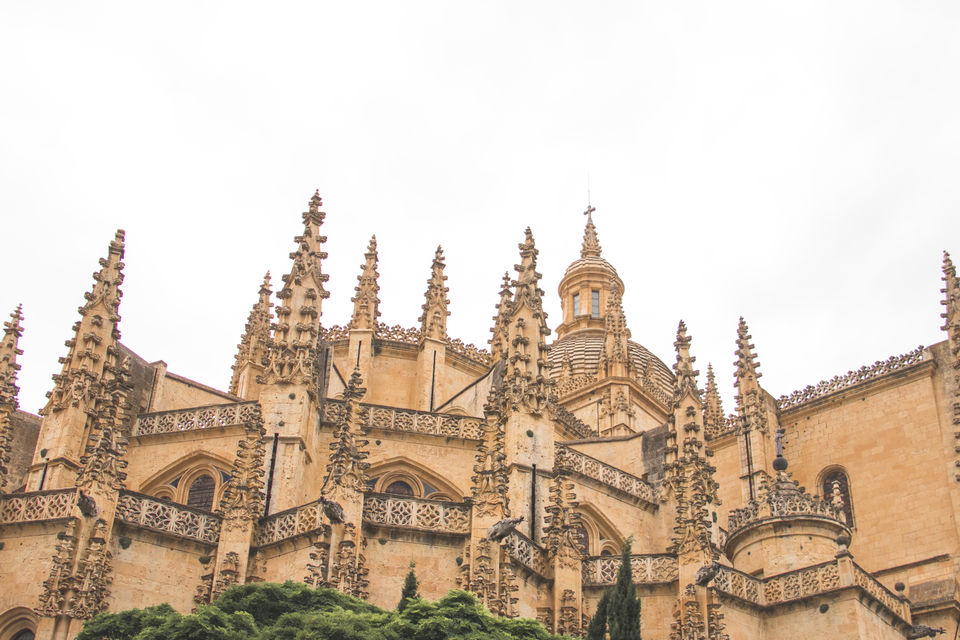 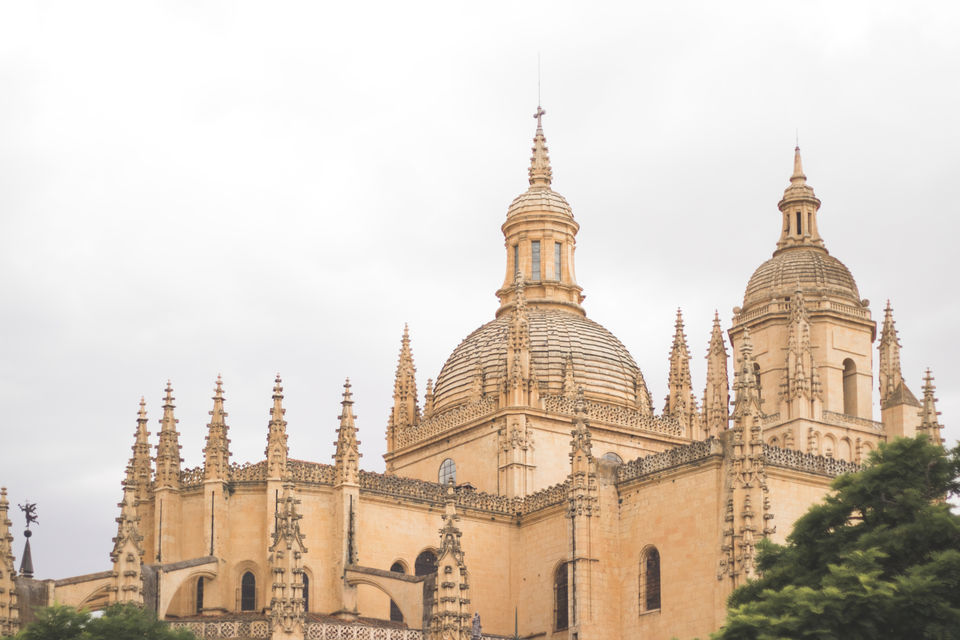 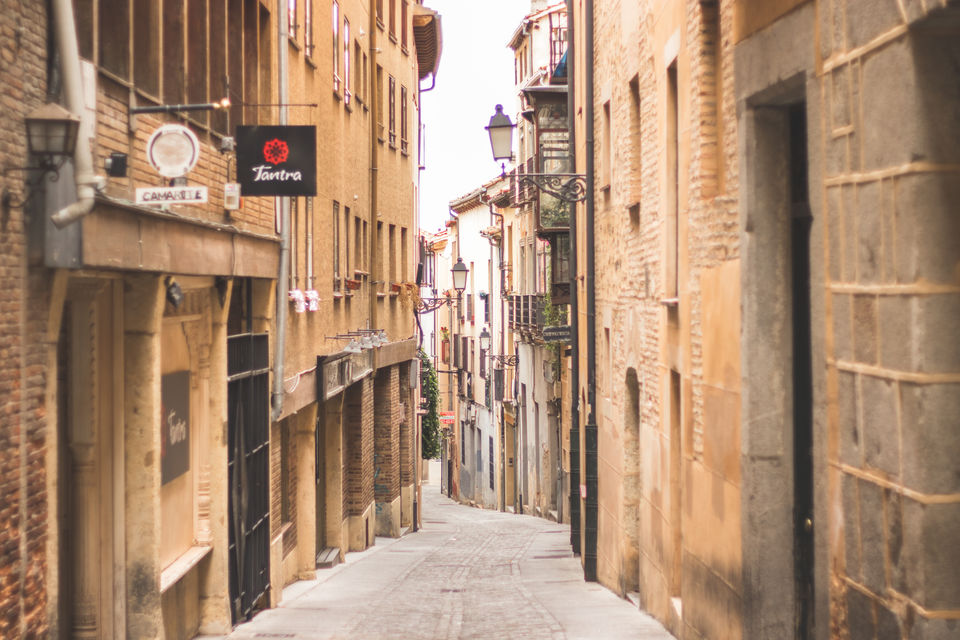 Even though not as grand and stupendous like Neuswanstein castle, the Alcázar of Segovia definitely counts as a fairy tale castle and is a world heritage site. The Alcázar was originally built as a fortress but has served as a royal palace, a state prison, a Royal Artillery College and a military academy since then. There is an entry fee of 5.50 euro to visit the castle and 2.50 euro to visit the Juan tower. If you are not interested in visiting castles, you can prefer to skip the tour but do not miss the Juan tower. It's 152 winding steps are a bit of work to climb but the views from the top are just amazing. You can see the whole city and its natural surroundings.

Front view of Alcázar of Segovia 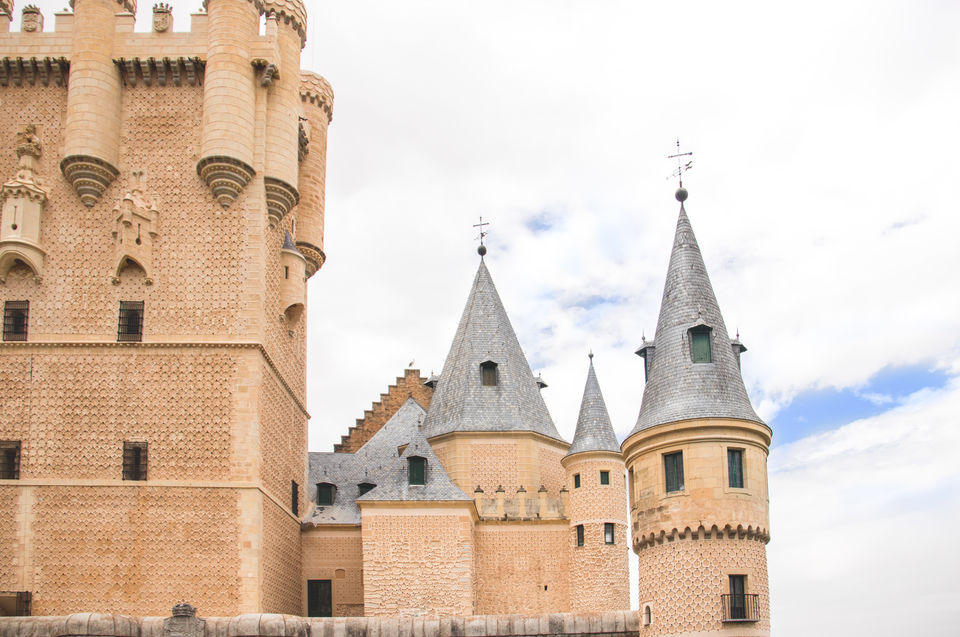 Inside the museum of Alcázar of Segovia 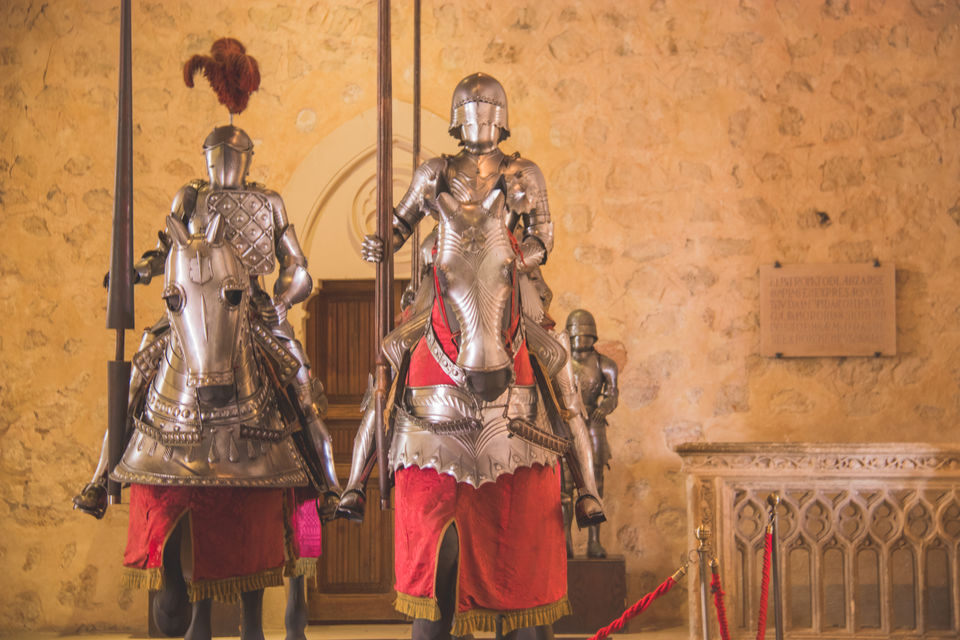 Beautiful wall painting inside the museum 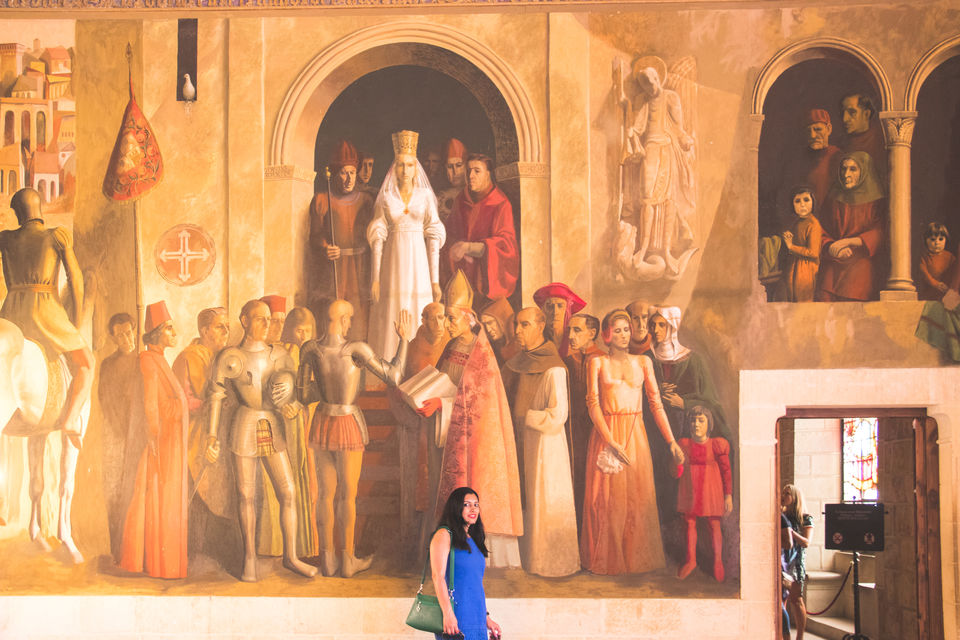 View of Segovia from the top of Juan tower. 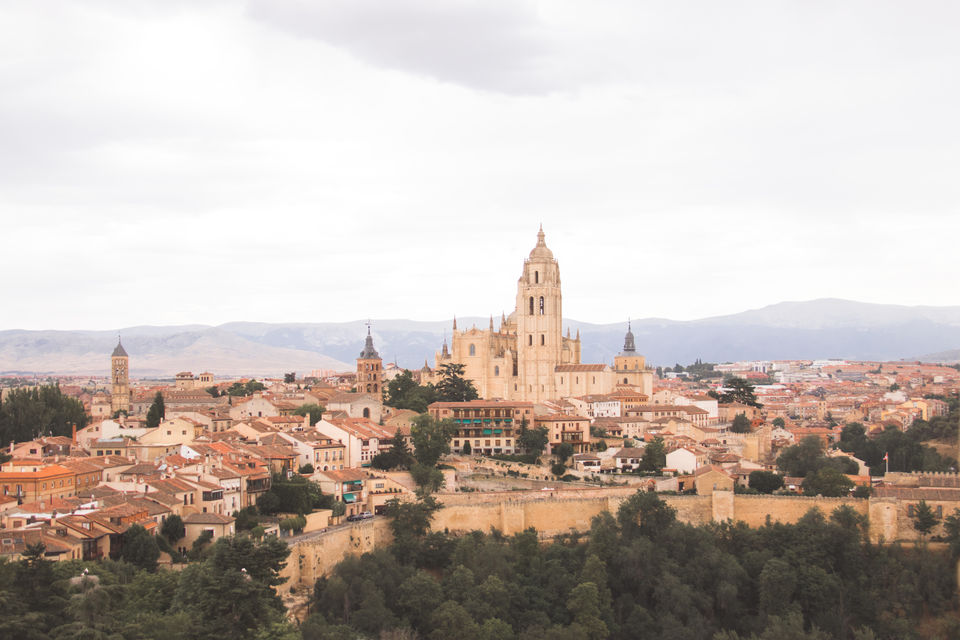 View of Alcázar of Segovia from below 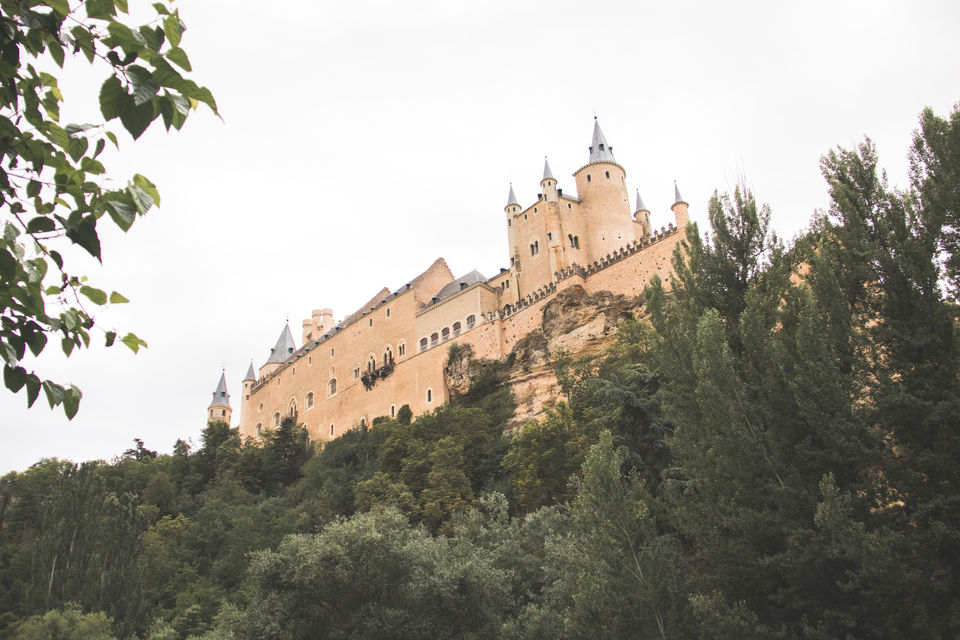 Segovia is very famous for its Lemon cake and we had the best lemon cake at Pasteleria Limon y Menta. The same place also sells a variety of Popsicle and we thoroughly enjoyed the frozen Mojito bar. Just like Madrid and for that matter any city in Spain, tapas are available in the main square and just pick a restaurant that suits your requirements and budget. Segovia is very famous for Cochinillo Asado or Roast Suckling Pig cooked in a special oven. But unfortunately we can't recommend a place to try as we are vegetarians. However, a little bit of research showed that Meson de Candido, José María Restaurante and Meson Don Jimeno are some of the restaurants where you can devour the Cochinillo Asado.

Also read: How to plan a road trip to Tuscany 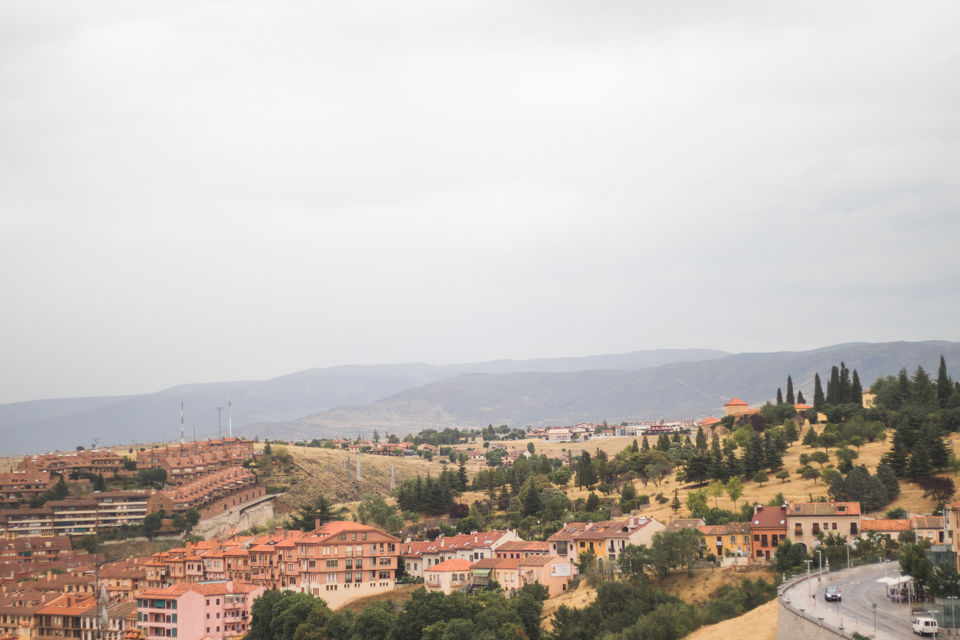 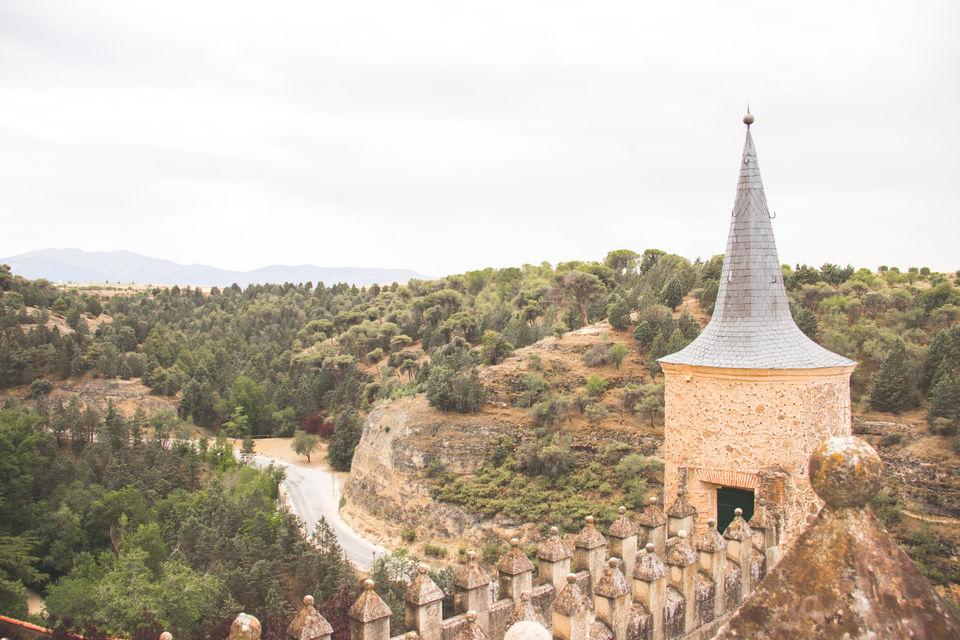