Slowly as my travel repertoire grew to expand and include other countries, alongside grew a fear of visiting the US of A, an impending looming scare that the more I see the rest of the world the lesser my probability of making it there would be and my reasons for explaining this lack would proportionately fall.

And so I did the only thing we humans know when confronted with a menacing issue that looks us right in the eyes – I distracted myself with everything else I possibly could. I managed to inoculate myself so well to the fact that when the opportunity finally presented itself, I remained resolute in my mind that it would never materialise. The only time I felt myself smile all the way inside is when I cleared immigrations at JFK.

And so, with all this information, an education that had been imparted and absorbed over three decades almost, did I set forth into the city of New York.

Manhattan. To see it outside of a cocktail glass. For one, it was big. It is terribly big. But only I seemed to notice it. The others walked by as if they didn’t notice the general expanse of the roads and the buildings, the cars and the coaches. In fact, they barely noticed me.

I didn’t know where to start, in a way I knew the city and yet, I had not the faintest idea how to go about navigating it. I had 3 days and I had told myself that I would do every site that had possibly featured in a Woody Allen film or that Frank Sinatra had sang about. Something like that. I walked more than 15 kilometres a day – what’s that in miles? – and the marches only left me feeling rejuvenated.

Tipping was one aspect that I never quite understood. What kind of a discretionary gratuity is considered obligatorily mandatory!? Ooh the inherent contradictions therein. Why does a standard rate of tipping of almost 15% apply across all forms of service and why must, if it change, only be for a higher 20%. Worst yet, why must we the outsiders who have a culturally different outlook to tipping get judged (or even admonished) for tipping any lesser? I was so scared to be followed out by an irate server or being abused and trailed by a taxi-driver that I tipped unwillingly yet generously if only to avoid any nasty confrontation. At no point was the service that exceptional or the airport drop that, I don’t even know the superlative adjective for airport drops if there ever was one – comforting? reassuring? – that one should feel the compelling need to drop a hefty 20% as tip.

Anyways, what can I say, I am an outsider. But at least I probably left a significant part of the service personnel in the ‘you ess of A’ believing that they were graced by the scion of a small princely Indian state who hands out dollars like toys from Ronald McDonald!

24-hour food... From Copiola to Gray’s Papaya, there is a certain convoluted charm, a gratuitous guilt in having food when you are not supposed to. In a city that veritably never sleeps, this is one pleasure that you cannot afford to overlook.

That myth about New Yorkers’ being crazy rushed and not having time is partially true. They are indeed crazy rushed. Where else in the world the subway trains would have an express line that skips stops along the way. (Oh wait, Bombay!) but the other part, about them not caring or bothering to help, that’s untrue. People stopped and shared information with me, even googled it for me and that is a more than I expect from the denizens of any metropolitan, web savvy or not.

NYC truly doesn’t sleep so the subway runs all night as do food places and bars. Choose your bedtime wisely. Also, choose your route home wisely – there are no points for narrating a lamentable tale about how you got mugged in some blind alley just because you decided to be brave and leg it.

Without further ado then, here are the few things that I gathered about this marvellous country. Some are places to visit, some, things to notice. Either ways, read it, and then, if you can, add to it.

This is not just a train station; it happens to also be one. It’s as if trains were moving along when this giant monument descended from the heavens and landed snug straddling the tracks on either side. The building is a sheer show-off in architecture, a wondrous edifice in stone and metal. 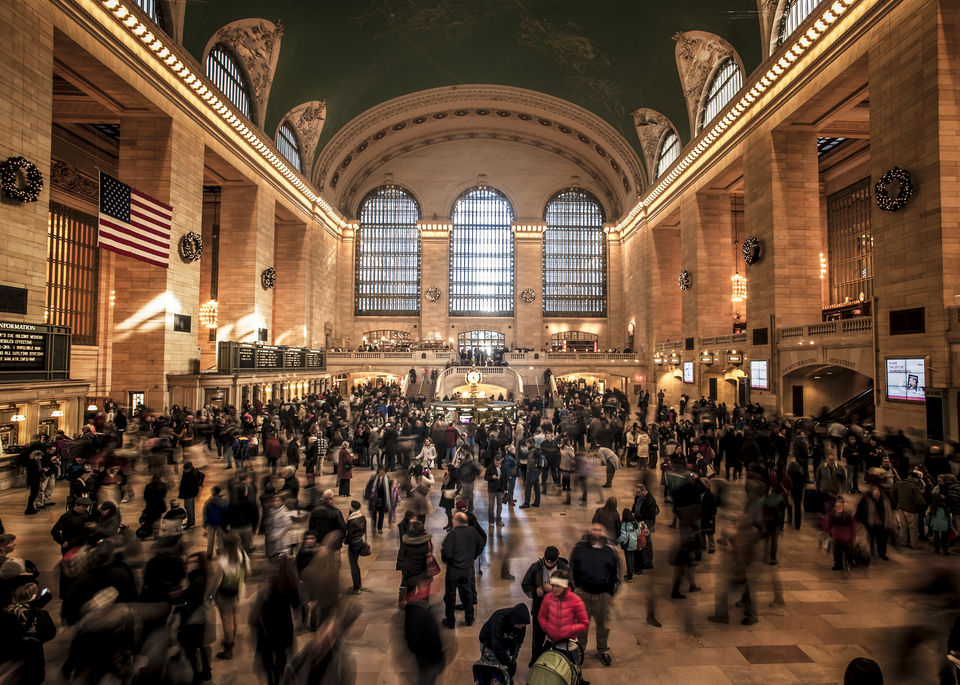 You will not know buzz till you have stood here and felt the world pass all around by. It’s like Piccadilly in London, but five times the size. And dirtier. Crazier. Unpredictably quirkier. 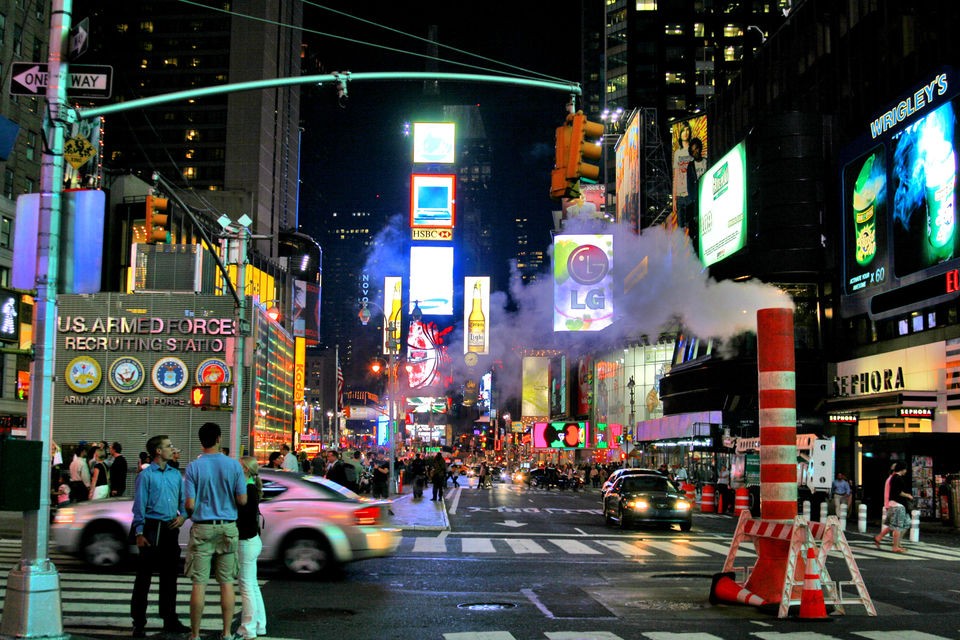 More interesting than a walk in the park is a walk first through the Apple store which has cult Mac-lovers flocking the glass cube like the Glass Pyramid at the Louvre but here the people seem to know what they are here to see, feel, or buy. But no really, do walk the central park. A serene oasis with verdant settings and winding pathways transport you away from the buzzing metropolis and, if you can get used to the stink from all the horse-pulled carriage taxis (called Hansom, after the English bloke who designed them) then you can even enjoy the wafts of spring in the air. 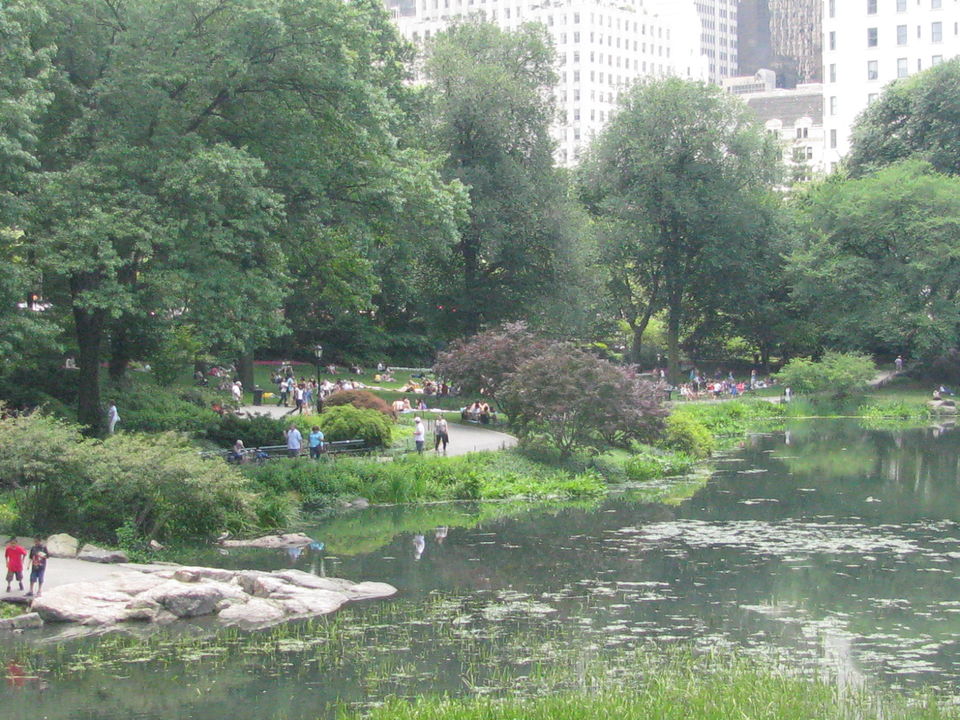 Views are slightly over-rated and the best ones of the Statue of Liberty as also the Manhattan skyline are to be had from the free ferry to Staten Island. The place where the ferry takes off for Liberty is actually nice to hang about and idly watch skate-boarders practising falling in innovative and gravity-reinforcing ways. Anything else is overhyped, including the rooftop bars - did someone say Gaensvoort? – and the other observation decks. You can do the Empire State building if you must scratch the tourist itch but I’d rather wait for the new WTC towers to be finished and go there instead. Else, you always have the Chrysler building to walk into and admire from the inside. The outside, if one need add, is equally stunning. 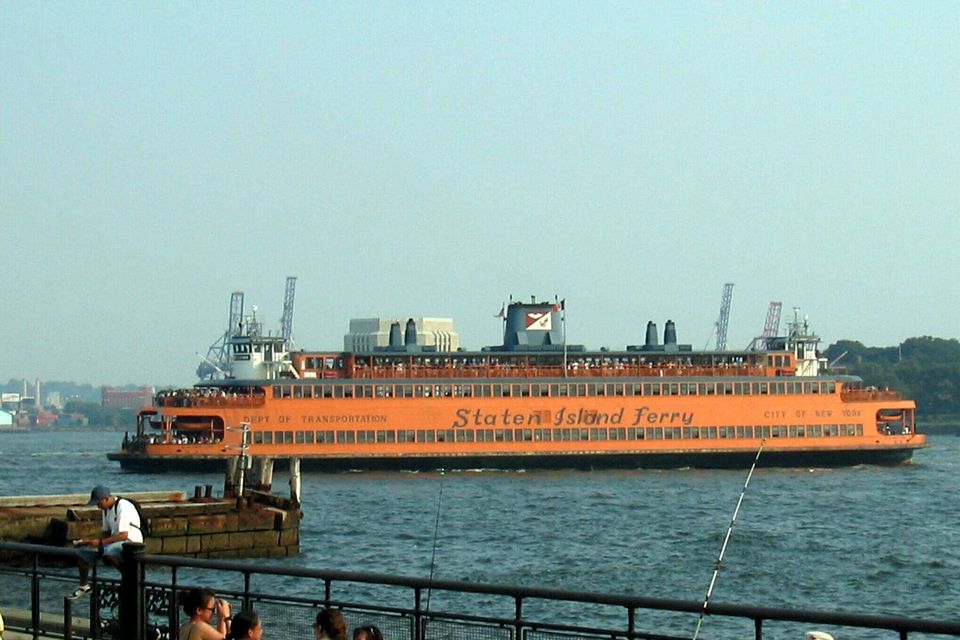 These are the slightly edgy parts of Manhattan. Totally worth visiting but keep an eye out. Not all out crazy Zen warrior like Steven Segal but furtive yet alert like Liam Neeson. Terroir wine bar was a lovely stop as also Pouring Ribbons for cocktails. 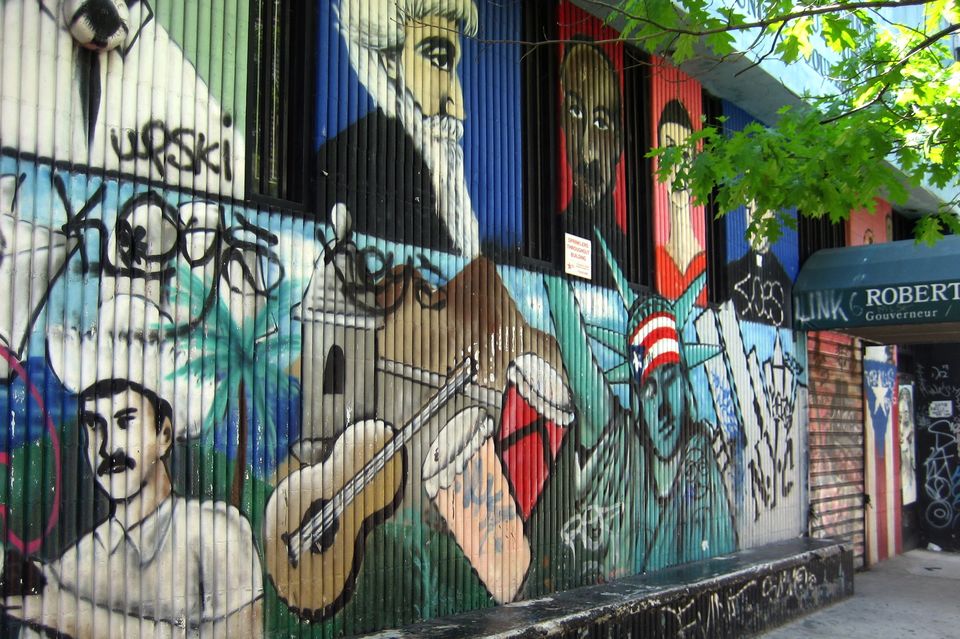 While on bars, Budakan is good too but nothing similar – more opulent, oriental, and add-any-adjective-beginning-with-‘O’ (like Oban - A synonym for great taste!) For SATC fans, this place is a must-do as the wedding dinner scene was shot on the grand dining table down below. (…and no I didn’t know this for myself; I was told that last one!) 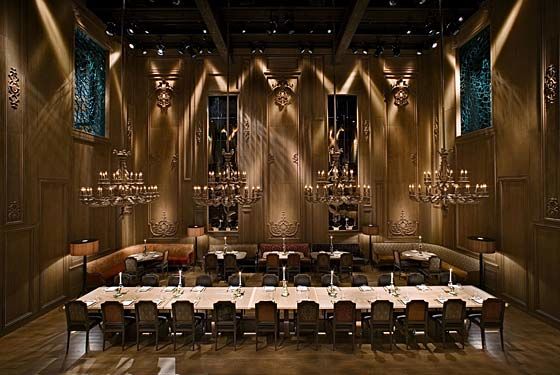