All geared up to begin the Trek 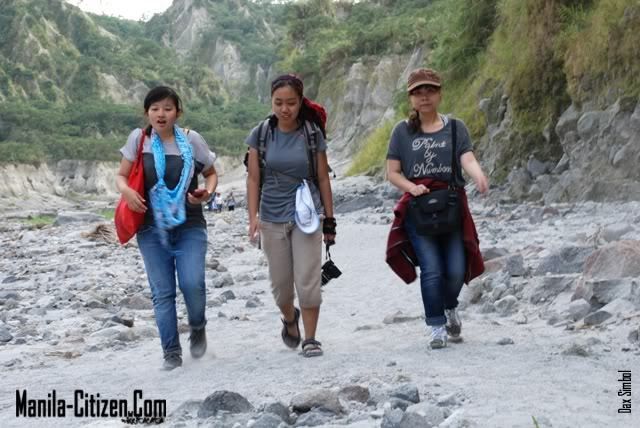 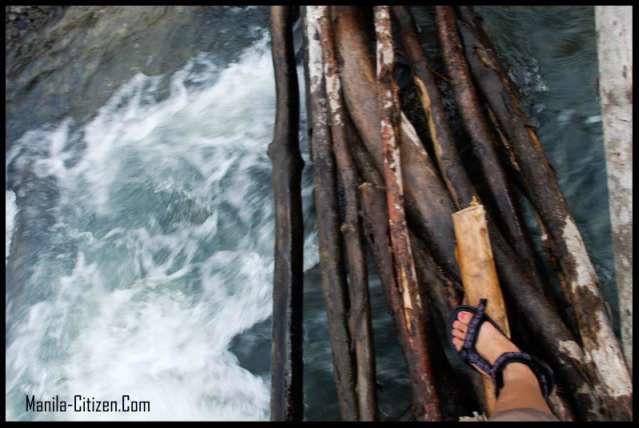 A happy ending of the trek 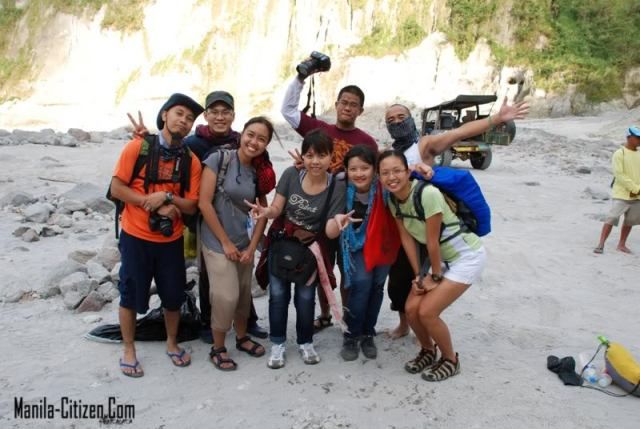 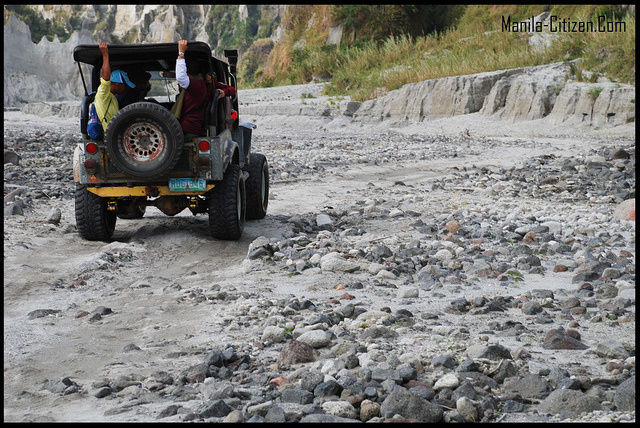 Shaking the fatigue at the Pinatubo Lake 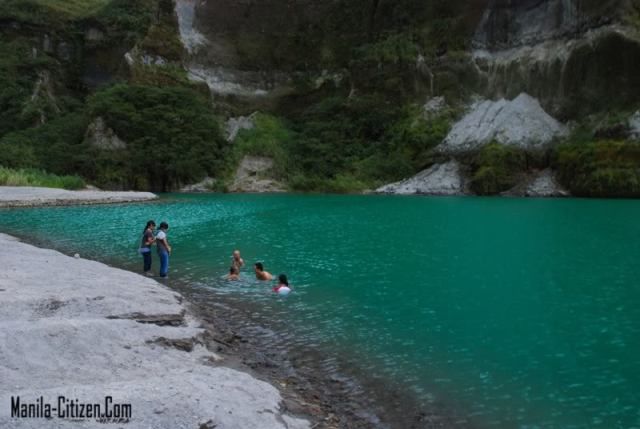 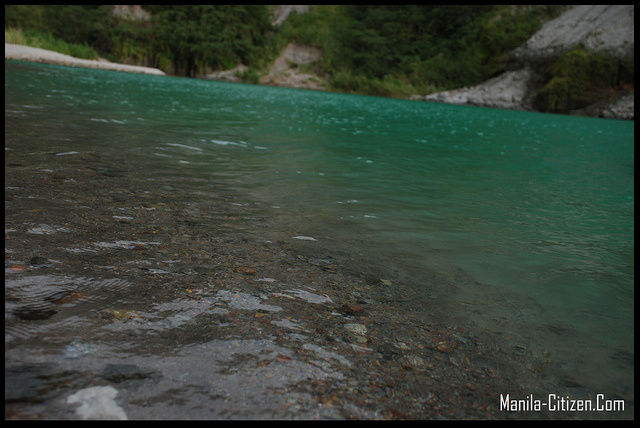 After 2 hours of trekking.....yeah right! 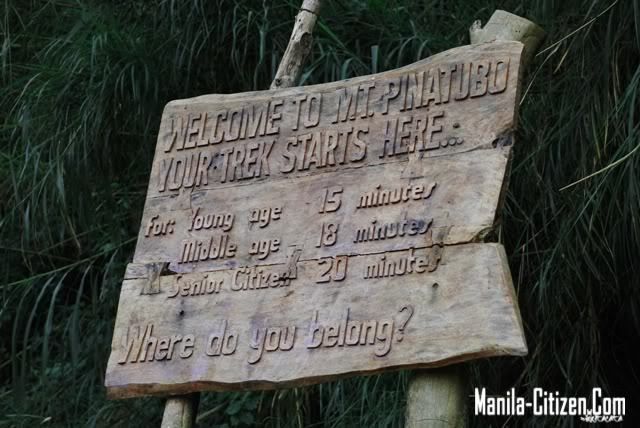 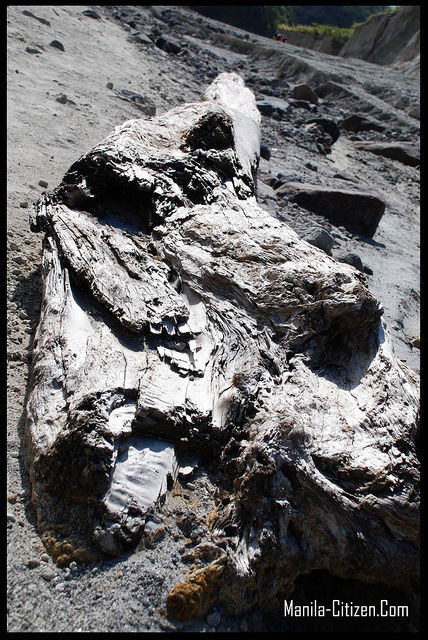 It’s not easy going there, especially if you don’t like dust, heat and getting your skin browner. And since I am neither of those, I signed myelf up to my friend and former workmate, Melai’s, FB post of asking people to join her and her new found Vietnamese friends to trek Mt. Pinatubo.

Well, first you have to fight the urge of oversleeping because the bus ride from Manila to Tarlac is around two hours. I had to drag myself off the bed and do a little of my early morning prayer at 2 AM because I could not afford to miss my schedule. My father dropped me off at Victory Liner Pasay and we had a small chitchat before my bus going to Dagupan was to pull out of the station at 4:20 AM. He was half-awake all the time so he probably did not notice me getting a couple more hundred pesos from him “just in case”.

And because it was an “aircon” bus, there were few passengers.

Nothing worth writing about except for one little freaky moment when one man from across the aisle kept on staring at me like he was memorizing the number of moles on my face. I waited for him to sleep then I transferred to the second or third row to sleep. Melai called at around 6, wondering where in the world was I and when I told her I was in Tarlac City already, she told me she’d pick me up in the Tarlac City terminal. When I rang Melai’s phone to tell her I was waiting for her already, a guy’s voice was on the other line. It was my first time to talk to Juric. I wandered around the terminal with my heavy backpack and wondered how many people were still sleeping in Manila as I skipped paying P5 to the lady manning the wash rooms.

NOTE TO TRAVELERS: One thing about bus terminal wash rooms in the Philippines is that they are never ‘free’. But paying is not required. You may or may not want to pay the ‘donation’ for peeing.

We arrived a Capas to wait for the Vietnamese visitors. We parked outside Chowking to have breakfast. Getting there via 4×4 gives you the experience of putting on free clay hair gel. I had bandana on, but it still was not good. I should have brought an astronaut head gear. We had a pit stop at Mordor. We called it Mordor because it reminded us of – well –  LOTR and Mordor. The driver and the guide told us to take some photos, like it was a ritual we’re required to undergo. I have to admit, it was a lovely place.  All you can see in that lahar-stricken place was… lahar. Everywhere you look, it’s lahar. You breathe lahar. You think lahar. When you close your eyes, you can’t so easily because of lahar. After some Pulitzer-prize winning photos, we headed to our destination. 45 minutes later, our lahar-covered selves found the entrance to the trek. And we were excited.

Two hours later, after trekking, getting to know each other, taking turns in leading and getting behind, we found a stopover hut and rested for around ten minutes. Melai, Francis and I skipped the sitting part because we all believed sitting will make our bodies reset and relax. Some weird physical mumbo-jumbo. Before entering another trekking area, you will see a sign that says “Your climb starts here.” After two hours of fighting exhaustion, the sign simply says it was the beginning of our ascend to Mt Pinatubo. Now that I think of it, it seems right. We’ve only been walking horizontally. Now, it was the time to really ascend. Climbing the crater could take around 15-25 minutes, depending on your age and speed. Well, your stamina and gut-feeling too. There was also a challenge for youngsters to beat the minutes for their age group. We were up to it. Except, we seem to have not made it.

Finally, after 20 minutes, we reached the crater.

Words to describe it?

Amazing. Whoa. Volcano. We rested while taking lunch. Francis entertained everyone with his language-proof jokes and some Filipino-only ones. Going down the crater to swim / ride a boat / simply take photos is easy. Since it was a common trekking tourist spot, there were steps made of small stones already.We got up at 5 AM (my morning prayer included) to get ready for the bus ride back to Manila. The Vietnamese people had a flight to catch going to Laoag and I dropped them off to Duty Free Philippines Fiesta Mall. We had breakfast before I bid them goodbye.