A Taste Of Culture In Vietnam: Part II

Vietnam is a land of contrasts. As mentioned in part I of our journey we spent a beautiful six months visiting the various places and understanding the culture of Vietnam. There is a battle of customs and traditions raging between the modern, western lifestyle touted on television and in advertisements and the olden ways. Keep in mind that many customs are still observed such as always removing your shoes before entering a temple or home. The traditional Vietnamese greeting is to fold your hands in front of you and bow, but nowadays shaking hands is more the norm.  Don't leave your chopsticks sitting vertically in your rice bowl because they mimic incense sticks burned for the dead. Don't point your feet towards any sacred images such as Buddha or pat anyone on the head - the highest sacred point of a person.

Some modern ideals are sorely lacking such as women's rights. Women in Vietnam are still treated as second-class citizens and are seen doing backbreaking work, lifting loads of 60 kgs, something many western men couldn't begin to do. A new 2-child policy is now enforced in the urban areas (actually the government only pays for the education of the first two children, which has proven effective). This is allowing women to enter the workplace and a small emerging class of professional women, mostly involved in foreign business, may be seen charging into battle, armed with tailored suits, cell phones and briefcases. With a population of close to 85 million, Vietnam is definitely entering the modern age and, this, once mainly agricultural society, has seen a shift from rural areas into the big cities such as Saigon.  Everyone hopes for a shot at a new prosperous life, but some end up surviving in poverty situations or reverting to prostitution to stay alive.

Our visit to the Mekong Delta was the most interesting. The Delta is used greatly for rice cultivation, which is something that is close knit with the Vietnamese culture. Dhanya, an ancient Indian word for rice, translates as the sustainer of the human race.  A Vietnamese fable tells of olden days when rice didn't need to be grown. It could be summoned, in the form of a large ball, simply by prayer. One day a man ordered his wife to sweep the floor in preparation for the daily arrival of the rice.  She was still sweeping as the white ball appeared and struck it, shattering it to pieces.  Since then, the Vietnamese have had to work hard to produce rice by hand.  And they do work hard, as seen at mile after mile of rice fields covering the Delta.  Women in conical hats, 'non bai tho', irrigate the shimmering green fields by hand, as nearby farmers plant new starts or plow with water buffaloes. Not much has changed for centuries, except that with a push from the government, export of the world famous rice has risen to 3.5 million tons annually.

Vietnamese tradition and culture is filled with many more such stories. Traveling here was lively, rich and rewarding and needless to say, we came back with a lot of stories!

We continued our journey towards the South and this little town of Quy Nhon was a delightful stop along the way. Miles of beachfront provided hours of walking along the surf. From high atop the bell tower of the cathedral in Quy Nhon we spotted a rooftop statue of Quan Lin. Like a treasure hunt we followed the narrow streets until we found these resident nuns, who welcomed us in for over an hour; serving us tea, explaining the different statues and how to light incense, then bow. We were welcomed once again into the Vietnamese culture. 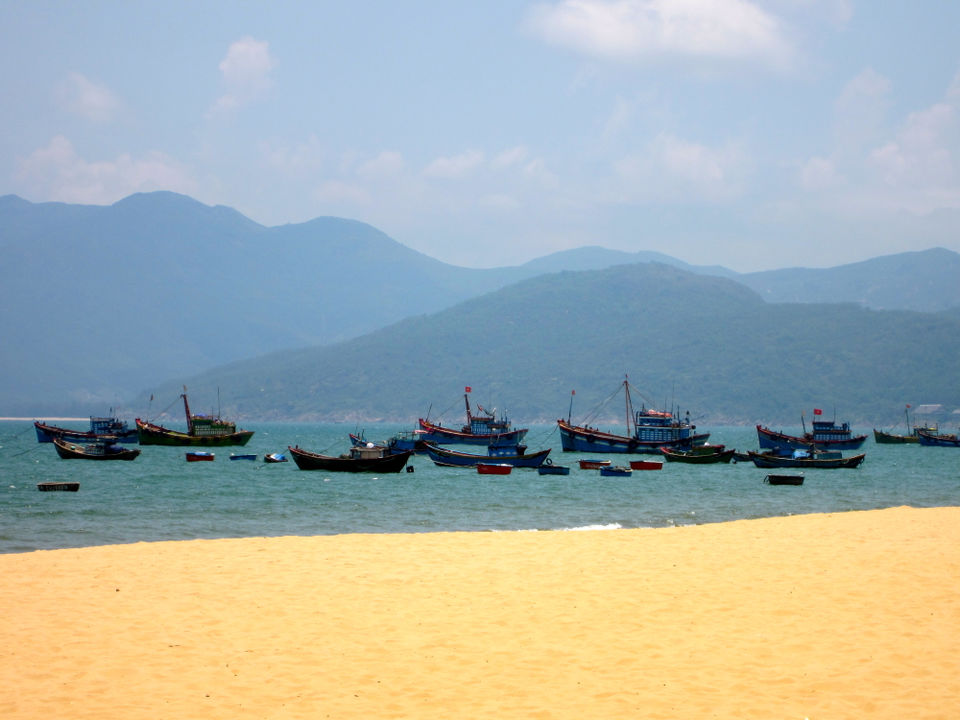 We took a public bus to the scenic location of Nha Trang. Resembling Waikiki in the 70's, it is a Mecca for local tourists and foreigners alike. We had a quiet New Year's Eve as it started raining about 10 pm and we skipped the outdoor stage and entertainment along the beach. The next day, we decided to hike along the beautiful beach, over the bridge, through narrow alleyways and ended up at the Po Nagar Cham Towers. The Po Nagar Cham Towers are located on a small hill overlooking the Cai River. We were impressed at the restoration effort. The place is still used by Buddhist worshipers praying and lighting incense, each inner temple was cloudy with smoke, as it has been for centuries. Later, we visited the Long Son Pagoda, presided over by a 44 ft high sitting Buddha. We then set out to explore out favorite haunts. Buying fruit in the market, stopping for a refreshing coconut, having a plate of Com Chay or strict vegetarian Buddha food as it is referred to here, followed by a dish of our favorite street food, bananas in leaves roasted over coals, topped with a rich, hot coconut tapioca cream. 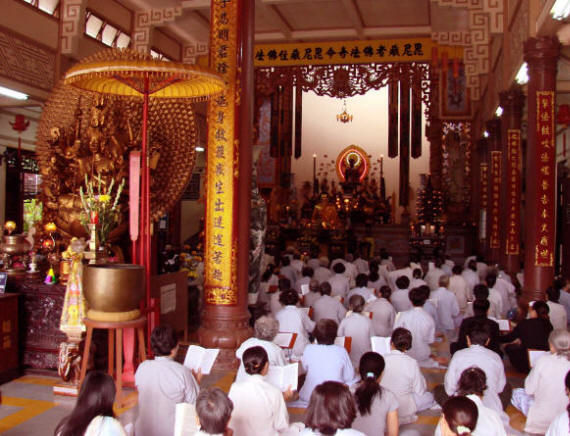 Dalat is the Honeymoon hill station and we stopped there for just a night (Frankly, it was very cold to stay for more days) A former hill station for the French, the almost 5000 ft elevation was used by the locals and the tourists to escape the sweltering summer heat of Saigon. The crisp winter days and bright blue skies were a welcome backdrop for exploring the shores of the lake and the raucous, colorful market, where local fruits and vegetables of every description were practically given away. Having layered on all the clothes from our suitcases and still shivering, we paused for breakfast the next morning and swore we could hear the distant pounding surf of the warm coast. Not willing to stay for another night here, we set off towards Saigon. 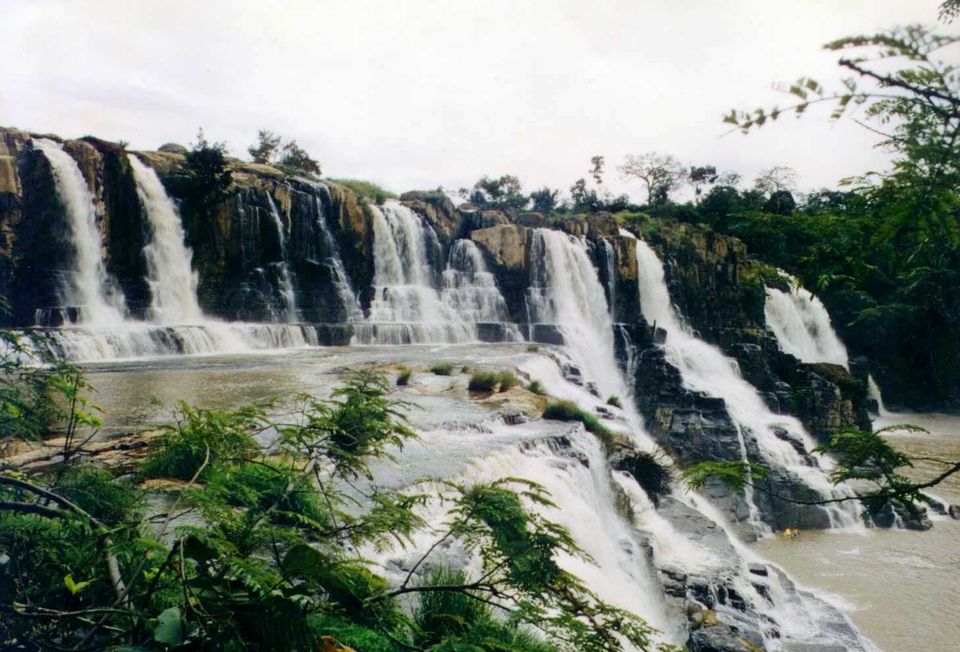 Saigon, or officially, Ho Chi Minh City, is a bustling city. It is also a city of contrasts, old and new, rich and poor, modern and ancient, for better or for worse. It kind of sums up the essence of Vietnam. Our first stop was the Notre Dame Cathedral. With its twin 40 m. Square spires dominating the central skyline, it was built in the late 1800's. A cool, quiet place to visit. We noticed that some of the stained glass windows have now been replaced, as all were damaged during the war. Walking the shady tree-lined boulevards it is hard to imagine that following over a century of French colonialism, Saigon was the scene of many battles during the American War. Ancient Buddhist pagodas filled with praying monks and wafting incense. Across the street from Notre Dame is the largest post office in Vietnam; architecturally exquisite, this grand building constructed in 1868 oozes with history. Ho Chi Minh, or 'Uncle Ho' gazes down from the far wall, watching that the mail is sorted correctly or that proper change is given. 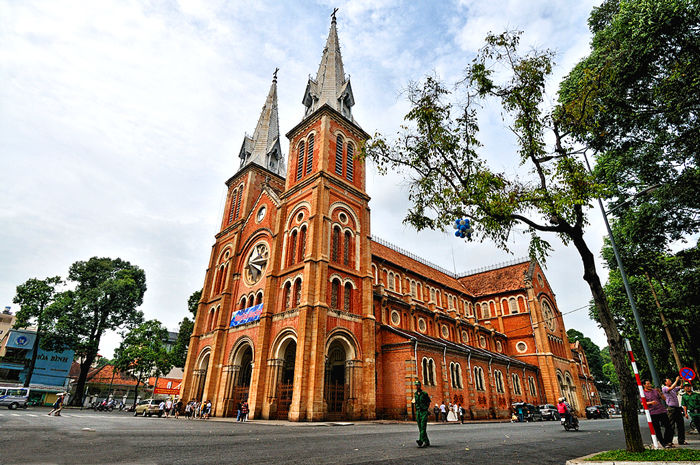 Mui Ne almost took our breath away. A new Vietnamese tourist destination with the usual strip of fancy hotels and restaurants, it reminded Joseph of Waikiki in the 60's. We were living right on the sandy beach, with shady palm trees rustling in the breeze. We would walk down the beach or along the sand lane to the local market a mile away and by the time we left, everyone knew us, smiling and waving a genuine greeting. The classy hotels with restaurants right on the beach were a great place to watch the kite surfing or beach-goers of all shapes and physiques, from wiry Vietnamese vendors to rotund pink Russians in bulging spandex. 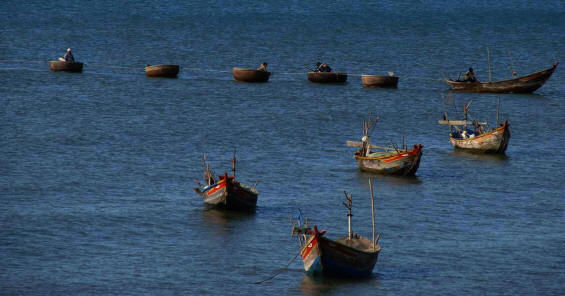 The River of Nine Dragons, or Mekong, is one of the world's mighty rivers. We realized at this point in our travel that we have followed the route of this river throughout. We started high in the Tibetan Plateau eight months ago, down into China, across Laos, and now the full length of Vietnam. Twenty six hundred miles from its origin, we followed the river down to the southernmost tip of Vietnam, the Mekong Delta. This rich, fertile delta is fed from soil washed from the high plateaus and all points in between. Fifty thousand people depend on this river for their livelihood in Vietnam alone and with multiple dams being built in China, the environmental impact will surely be felt downstream. We took a Mekong Delta Day tour out of Saigon and were joined by 13 others. Transferring over to canoes we explored up into the far reaches of the canals and waterways that weave the fabric of life in the Mekong Delta. 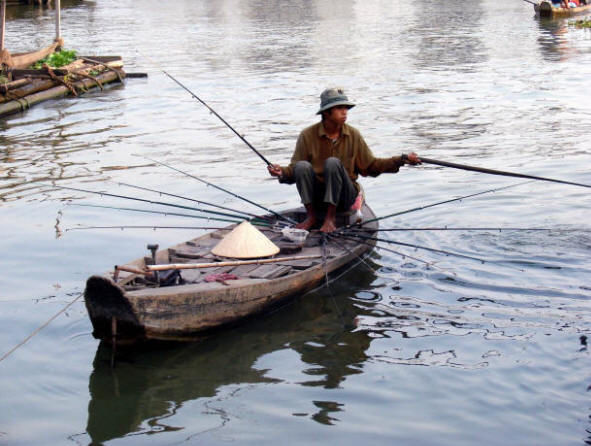 Tra Vinh is noted for an attention-grabbing collection of pagodas, with over 300,000 ethnic Khmers living in Tra Vinh province. The province boasts 140 Khmer pagodas compared to 50 Vietnamese temples and 5 Chinese. Without even trying, we stumbled on the exquisitely painted Chinese Ong Pagoda, with the red faced, deified general Quan Cong, a historical figure doing his best to protect the region from war. We happened onto a Cao Dai Temple and were warmly welcomed for tea and proudly taken on a personal tour of their recently built building. A new religion, created in the early part of the 20th century, it combines the teachings of all the great prophets from the east and west. Instead of a Jesus or Buddha in the center of the altar there is the ancient symbol of the all seeing eye in a pyramid, staring down on the chanting believers; dressed in white robes and black hats. The brilliant colors of this new temple were spectacular, in a Disney sort of way. 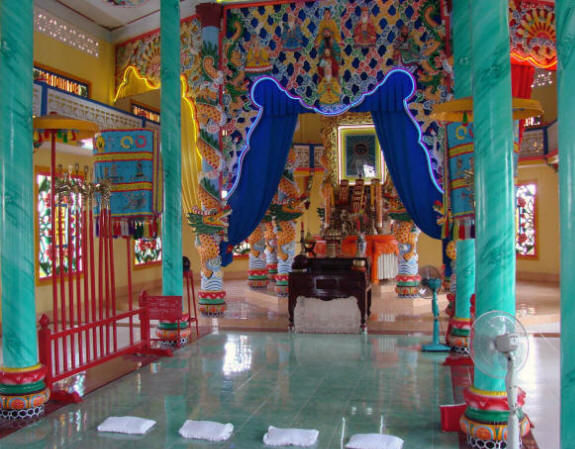 Can Tho surrounds it's life along a river and is widely known for its floating markets. The first market was Cai Rang, which was a conglomeration of small vendors bumping up against larger boats buying their precious harvest of fruits and vegetables, by the ton. An hour upriver found us in the middle of the Phong Dien Floating Market. A smaller version of the first market, we should have taken the shorter 4 hour ride instead of 6, skipping Phong Dien. 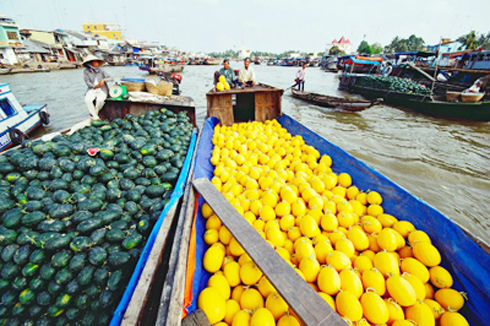 Chau Doc, on the Cambodian border is a hodgepodge of markets, boats and shacks lining the Bassac River. We jumped at the chance to stay in a funky room right on the shore. From our windows above we watched the beehive of activity and listened to the variety of motors powering boats along the river. We even put up with the occasional speed boats, making so much noise that we had to pause our conversation. 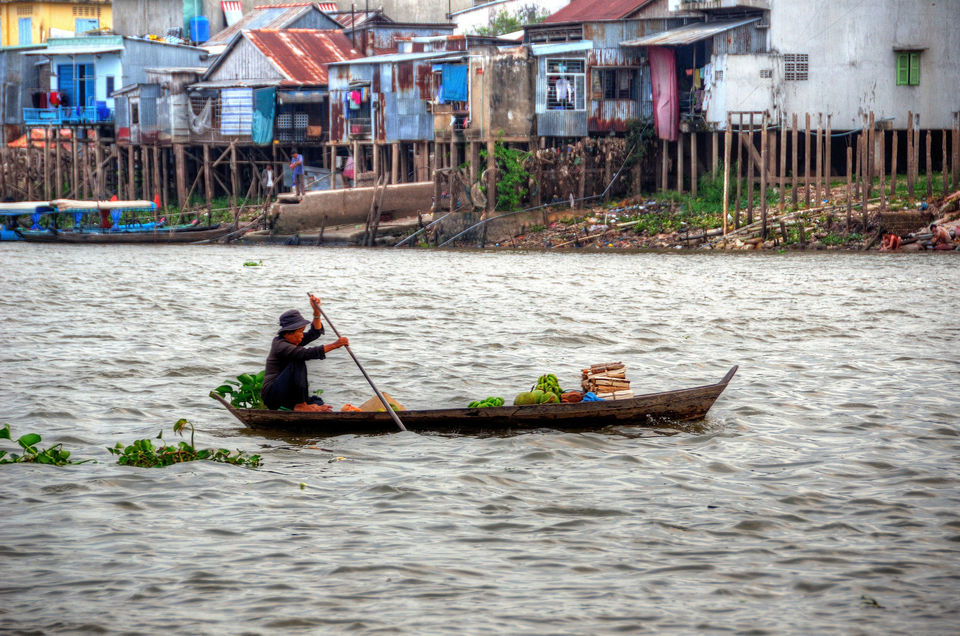