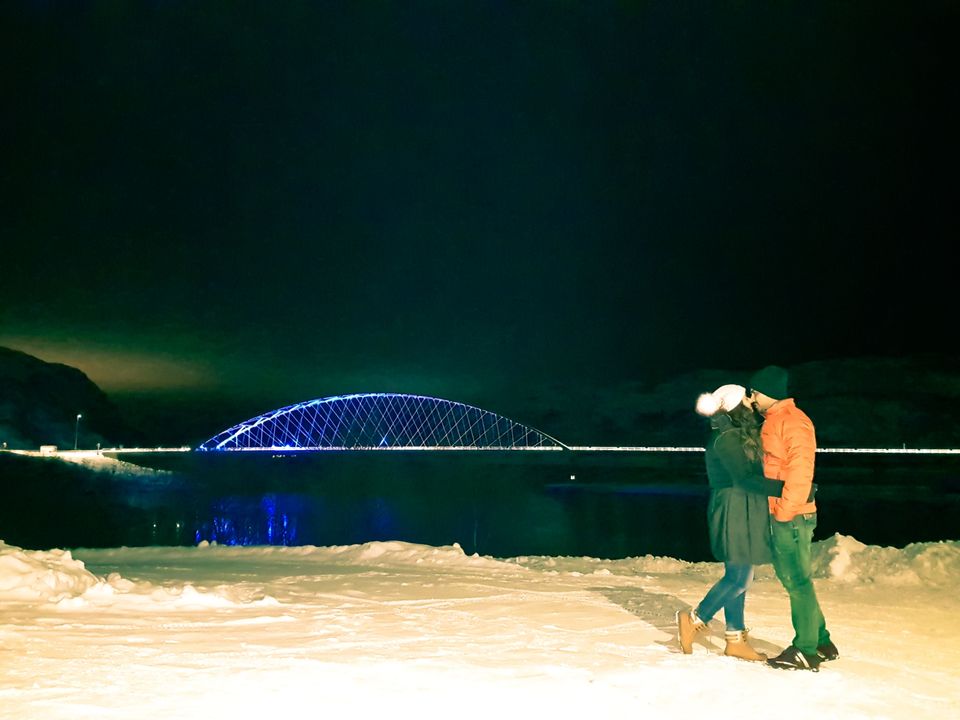 Better to SEE something once than to HEAR about it a thousand times.

After 3 flight changes, meandering aimlessly through airports and cranky from 31 hours of travel we reached to Kirkenes. Kirkenes is a small town in far northeastern Norway, close to the Finnish and Russian borders. During winter, up north, Day light lasts only for 4 hours and the temperature sores to -10 to -15 C, which is generally accompanied by strong winds. Coming from a tropical country like India, no amount of body warmers can prepare you for this kind of Bone chilling cold. So already cranky from sleeplessness, fatigue and cold we set out to chase some lights, as we knew we will be spending just one night in this small, snow-clad town and, we may never come back here again. In TV soaps they say, no amount of drama is ever enough. You need to keep adding twists and turns in every scene to keep your audience on the edge of the seat. That is what was happening to us! To add to our existing lists of qualms, was the fact that my husband had never driven on snow roads before and he was extremely anxious given that its a foreign country with Right hand Drive. We drove endlessly throughout the night(not that there is a concept of night up north in winter as its always night!) and saw some Huskies, Reindeers, snow covered mountains and some beautifully lit bridges, but no Lights!! We were extremely disappointed even after knowing the fact that its a work of nature and a rare occurrence. Before making our journey we had read countless tales of people of how they had stayed put in once place for even a week and had no show. So we decided to call it a night and head back home. On the way we decided to click some snaps of a beautifully lit bridge we saw on our way. As that was the only option for us to get clicked that night with some lights. But as they magic strikes when you least expect it.

As I lifted my head in surprise, following my husband’s line of sight above the bridge. Beyond the distant peaks, a green, blue and yellow symphony of lights had begun. It rippled and shimmered like sunshine on water, leaving me blinking back tears and I turned to kiss him. We had read about it but had never seen it before. I call it Celestial Disco but you may call it, Aurora Borealis or Northern Lights! Pure wizardry, Pure Beauty! In that moment I felt as if they should be accompanied by dramatic sounds, the bangs of wireworks or the roars of rockets. But these are utterly silent, almost solemn in their dancing. And yet they can be comforting in their own way; as if in this remote and frozen wilderness there’s something else out there that is alive. The northern lights painted the sky with stories we hadn’t heard of yet. We leaned back letting the colours wash over us and paint new dreams for us to follow. This is the cosmos playground! Its like sky dancing like Fred Astaire. So beautiful to behold that everyone should see this unfold once in their lives. If you have never enjoyed it, do it before you get too old to enjoy the show nature is putting out for you, its like watching sky misbehave.

In fiction, they have been used as a gateway to a parallel universe. In song, they have inspired progressive rockers and Welsh psych-poppers alike. But for me it will always remain my Celestial Disco.