Trip to Norway through the Arctic, Fjords and Northern Lights 14 Days Itinerary : Days 11-14 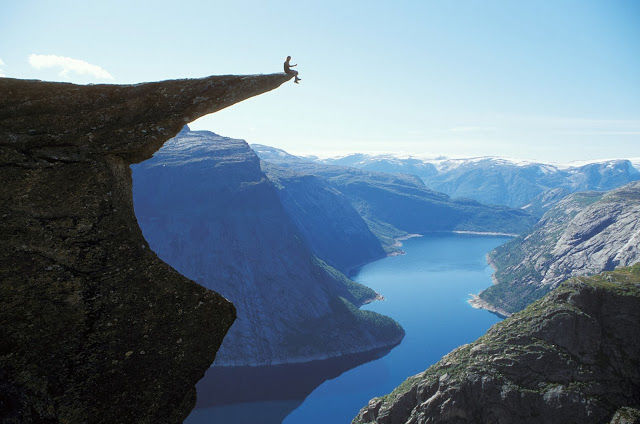 We make a last visit to the fish market to take something home. We have booked the Bergen-Stavanger trip in the Flaggruten a little over 1 month in advance. At 10 we left. Nobody asks us for the ticket. There are people who buy tickets there inside, in a window. The boat goes very fast. It skirts islets that seem uninhabited. We passed through villages. It's very good.

It makes several stops along the way. In Leirvik they announce that we must change boats to continue to Stavanger. And we do that. We eat on the boat. And it is at the exit of the Flaggruten in Stavanger when a member of the crew goes picking up the tickets bought online.

We took the map and arrived at the hotel, booked directly on the hotel's website. The room is very good! We also have hot milk with coffee and tea bags and complimentary chocolates. We let go of the backpacks and we go to see the city, much quieter than Bergen. We see Gamle Stavanger (the white houses of the old quarter) and other areas. When we get tired of walking we mix in a kind of outdoor party very close to the hotel.

There is a pub. I would not know how to define it, and in front of a garden with a DJ playing music, a girl juggling. It looks more Ibiza than Norway. We entertain ourselves by seeing the beautiful people of the city. We buy dinner from the supermarket, eat and go to sleep.

We get up very early to go and buy food at the supermarket. We do not know what kind of food we will get at the Preikestolhytta, the shelter where the Preikestolen route begins. We have breakfast and we go to the Fiskepiren dock, just in front of where the Flaggruten left us, to take the ferry (it also takes cars) that will take us to Tau.

It's 8 o'clock in the morning. We know that we can buy the tickets in the same boat, but there is a sign that tells us that we can also buy them in the offices, before going up. So we went into the building and bought a combined round-trip bus ticket. It really is as if we had hired an organized excursion, but without a guide. When we get to Tau there is a bus from the company waiting exclusively for those of us who bought this ticket.

There is also another normal bus waiting for Jorpeland, which I do not know if it goes to the same place. I do not know if it would have been cheaper either. Now it's done. In the bus we are less than 30 people. We arrived at the Preikestolhytta, a hostel with cafeteria, kiosk, toilets and free showers!

The driver of the bus gives us notes with the schedules, so that we have it in mind at the time of the return. They had already given us the schedules also when buying the tickets. We start the road following the indications and the red T.

It's sunny and hot, but the air is cold. We take it easy and in 2 hours we are up there! We cannot believe it! Maybe the secret has been not trying to follow anyone. Most people who have started the tour with us have taken it with a lot of enthusiasm at the beginning. In the midway, which in my opinion is the most complicated part (the area of ​​the big stones), they could not breathe.

We passed by a couple of small lakes. From time to time there is a map that tells us where we are on the route. When we get there up there are four cats. I'm glad I got up early. I cannot describe the sensation. We swell to take pictures. We have been lucky, and the fjord looks pretty good!

We had the intention of eating here upstairs, but we decided that better not, that we will do it in the hostel's snack bars. We see more people coming with us on the bus. A man from Austria, who we had met before, is happy to see us still there, because that's how we will take some pictures of him (he travels alone).

When we start the return we are even happier to have got up early. We see parents with children, dogs, and more tourists. They will not all fit there in the Pulpit Rock! After lunch we approach the hostel. At 3:45 the bus takes us back to Tau to take the boat back to Stavanger. We bought dinner at a supermarket in front of the ferry dock, which closes at 11pm and they also have hot food to take away.

We fall tired in bed.

We take it easy and try to maximize our exit from the hotel. We leave the backpacks in reception throughout the day. I start by walking along the beautiful Lake Breiavatnet to later visit the Stavanger Cathedral built in 1125. It is the only medieval cathedral in Norway that has retained its original appearance and in continuous use.

From here I climbed a hill on Kirkegaten Street to reach the tower of Valbergtarnet that was originally the highest point of the city. From the tower, I go down to the old port warehouses. Today there are 60 of the original 250.

After learning more about Stavanger, we eat at the fish market. It is not a street market, but a closed, tiny place. We bought a bag of the typical boiled prawns, boiled crayfish, fried fish and smoked mackerel. We sat at a table there outside. There are people selling away raspberry ice creams here too! We have dessert again!

In the afternoon we go to see the Sverd i fjell in the Hafrsfjord neighborhood of Madla, a borough in Rogaland. For this we take the bus, in the stop near the park of the lake, very close to the train station and buses. The bus makes many stops (more than we expected) and there is nothing inside the bus that tells us their names. We get off at the Madlaleiren stop (it's written in the stand booth), and right next to it there's a military base or something similar.

We continue walking straight, see the water, and we go towards there. Next we see the swords. It is a beach on the edge of a fjord. People sunbath (today it is very hot). We explored the area. The return bus is taken from the same place but on the opposite sidewalk. Once in Stavanger, we bought food at a supermarket for dinner at night and breakfast the next day. We collect our bags and go to the train station. We bought tickets and a sleeper coach online for the Stavanger-Oslo tour.

It's the first time we're in a sleeper. It's a red train, square, a little old on the outside. Half an hour before they let us go up. A sign on the platform tells us to go to the cafeteria car to validate our tickets. The conductor is sitting there. I give him the printed paper and he hands me a ticket and the keys to the room. The compartment is tiny. We have sheets and nordic soaps too and is better than I expected.

We had dinner right there on the removable table. Someone tries to open our door. We open ourselves to see who he is and a man shows us a key with the same number of room as ours. We tell him that he must have mistaken the car or that he asks the conductor, because his key does not open and ours does.

We leave at 10. Until 12 o'clock at night there is a meeting in the hall. We cannot even get past the people! Then everything is silent, even the speaker that we have inside the room that warns us of the stops. We roll the curtain so that light does not enter. And to the beat of the noise we fell asleep.

We were already awake because we had put the alarm clock. Before arriving at Oslo Central Station, we are notified by the loudspeaker. We have slept a lot, sometimes, but it has been a smooth journey, without lurches or many stops (or so I think). We arrived in Oslo at 7:26. We had breakfast at the station.

We arrived at the bus station (next door) and kept our backpacks in a locker. We take one last walk through Oslo. We approach the Akershus fortress. We are tempted to take one of the free bikes that are scattered around the center. That's what we saw that people did. But as we do not know where these points are distributed and we do not have much time left, we are left with the desire.

We return to Bussterminalen and see on the screen on which platform our bus will be back to the airport. We look for the round trip ticket that we bought when coming. At 12 the bus leaves. We check in (there is almost no one, the airport is very small). They make us pass our backpacks in the luggage because they consider it special luggage for the fact that it is a backpack. A guard passes them through the scanner and says that everything is fine.

We pass through the normal detector to access the boarding gates. Almost everyone is made to take off their shoes. We eat at a self service right outside our boarding gate. At 2 we got on the plane and took off.

During the flight we take stock of the trip. Everything was great, but we agreed that the best moments were spent in nature. The trip has been full of anecdotes, and experiences. Some have been recorded by the camera, but many others only in our memory.