Unblemished Trust and Faith Rekindle Life to it's Very Best

Humanity is all about caring and sharing whenever it is possible to do so. Noone can plan such things out , and the spontaneity with which it occurs, and that too if it is in an alien land, rekindles the belief of an unblemished Trust and Faith on fellow humans, and my own philosophical belief, that Life is Love and Love is Life.

This is a part of my small travelogue of my Scadenavian Tour last year, that will definitely prove what I wish to convey.

From Tallinn to Oslo and thereafter to the hotel from the airport.

Who says Indians and Pakistanis cannot be real time friends! Today I had a hands on experience regarding how spontaneously one can be helpful towards the other, in an alien land.

It was 11: 45 AM Norwegian Time that we landed in Oslo, travelling from Tallinn. The Oslo airport is relatively quite a busy airport. After checking out with our luggage by 12 :15 PM, I sat down in an bit isolated arena within the airport premise, and using the airport wifi, I started trying to figure out the way to our hotel which was Oslo Vandrerhjem Holtekilen ( it's actually a hostel but a very interesting one).

The route which was provided to me in the mail , by using the express train "flytoget" from the airport terminal was quite expensive for a small journey of 34 mins. ( 190 NOK, appro20€/ head) . Also thereafter we were supposed to buy tickets for 1 zone bus ride (for 40 Nok per head,approx 4 €). Spending around 50€ for travelling to reach the destination hotel , I found way expensive. So I started looking for alternative routes.

While I was trying to figure out things, using the google map, my better half, Mitali , who was sitting beside me, finding two small children sitting beside her, started talking with them. It turned out that they were Pakistanis, residing in Oslo and had gone out for a vacation in Spain and were returning back home. Their parents had gone to the washroom while they were sitting beside us and after they returned , Mitali started communicating with the lady too, while her husband stood a bit aside. In between, I casually  asked him, showing him my e-booking,  if he had any idea of our the location to our hotel( hostel).

Seeing the mail which was provided to me from our hotel , he said that there were two other alternative ways to reach our destination hotel. One way was travelling by local regional train ( towards Kongsberg) to the train station, Lysakar and then boarding the 160 bus for two stops to reach our destination, while the other was to make both the part journeys through bus ride . But then he said, using the regional train from the airport would be easiest for us. Hearing these few other alternative choices, I started getting a bit confused, about what to do.

Seeing a puzzled expression in my face,he smiled politely and told me not to worry. He said that he was himself a bus driver and knew the routes around Oslo fairly well and we could definitely trust him. I immediately held his hand and showed my affirmation of trust. He told me to come with him while his wife and children sat with Mitali. We walked for about 50mt, and then from an automated machine ( which had a  Norwegian language), he helped me buy two, 4 zone tickets for 101Nok each ( total 202NOK). He told me that these tickets would not only cover our train journey, but also the phase of the bus journey too. Thereafter we went back to where our spouses were sitting and then we all after clicking pictures and exchanging our numbers, left for our respective ways.

As of our journey, the train left from Track 4 at 12 :43 PM and we reached Lyskar at 1: 18 PM. Thereafter we went down and boarded 160 bus just outside the station to reach our hotel. Thus in a way we reached our hotel( hostel) by spending 202 Nok in all, which in equivalence was approximately 22 € inclusive everything for both of us.

It was indeed all such an amiable interaction between all of us. Before we all left, the lady even told Mitali to refer to her in case of any emergency while we were in Oslo. She told us that she had actually come back to Oslo 5 years before, and while her husband was a bus driver( which he had already told me),she worked in an IT firm. The way both the Pakistani husband and wife interacted with us, it appeared we were long time acquaintances.

This is what true humanity is indeed all about, beyond all possible inflicted hatred, between the two neighbouring countries of the Indian Subcontinent. Wish we citizens of both these two countries come closer to each other , as we tend to do so in an alien land.

The Pakistani couple with their children and my better half, Mitali 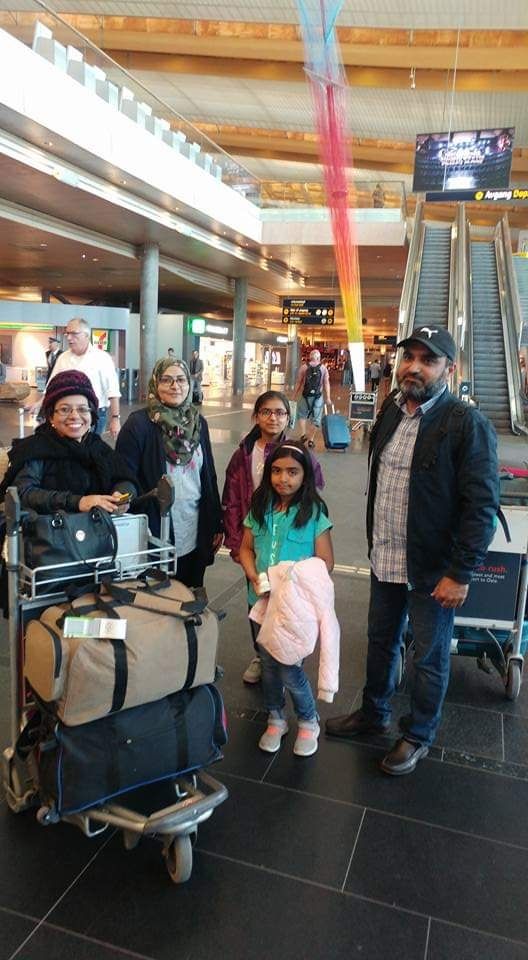 Me, Jayanta Mukherjee, at the airport train station 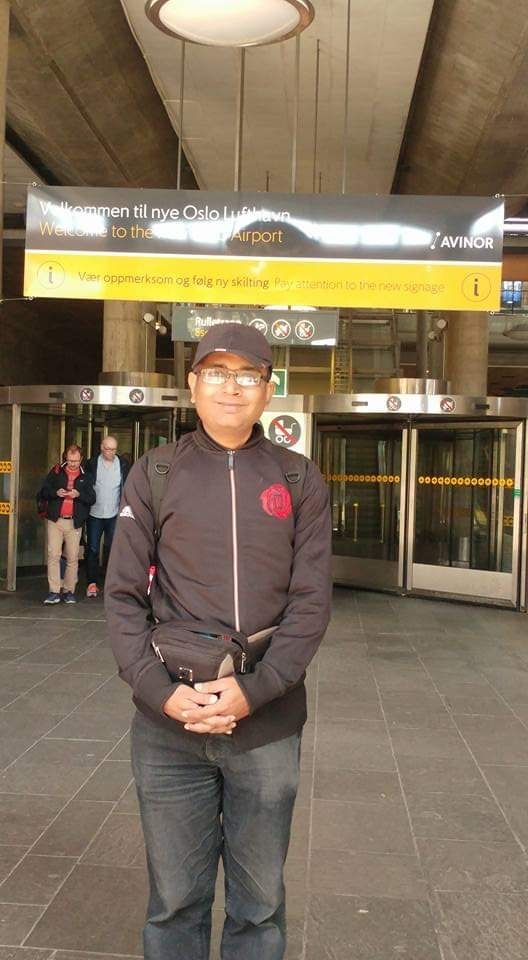 Me Jayanta, and my better half Mitali in the train station 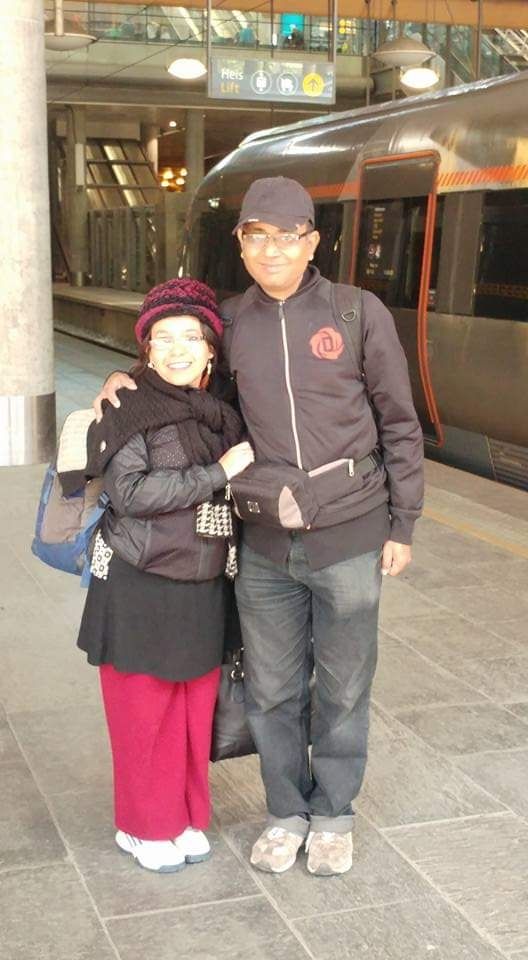 The local train we boarded towards Kongsberg 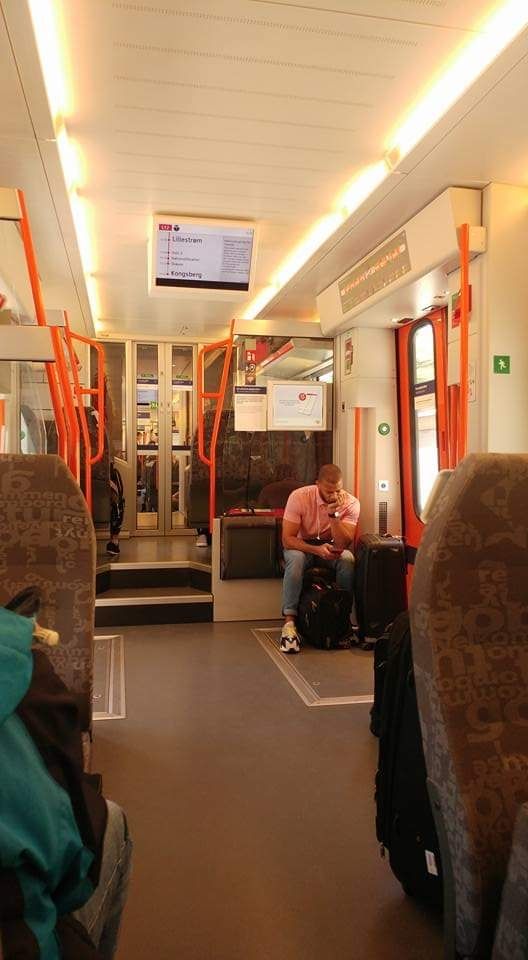 Me ,Jayanta, taking a picture beside the famous Fly to Get train 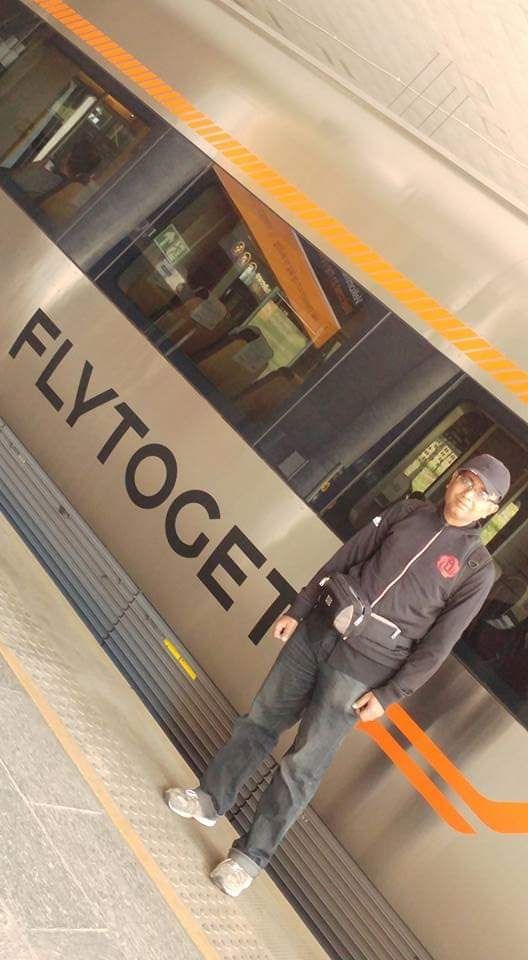