Who ain’t fond of animals? Especially wild cats!!
The next thing on our list was a mysterious place as I had heard mixed reviews for this place. You get to walk with tigers as if they were your pets, some said while others said you get to sit with them with their heads on your lap! Both sounded interesting and I was in for any of it.
SriRacha Zoo located close to Pattaya, we took taxies by 8:30 in the morning and we soon were at the entrance of a beautifully built zoo.
Taking the entry tickets which cost 450 Baht for adults and 250 for kids, we entered and were amused by smallest things as they say, when you are in a foreign country everything seems amazing but less we knew the day up ahead was about to get amazing indeed.
The first show was the tiger show where tigers performed varied stunts like jumping through the ring of fire or walking on 2 legs. The show was no less than a circus, it was fun for kids but honestly, it wasn’t fun to see such a beautiful animal do those things but less did anyone care there.
The next stop was the Crocodile show, this was something that I had seen as a kid on the discovery and national geography where a guy would push his head in the mouth of the crocodile and will pull out on time before the crocodile's jaw could crush his skull.
The stadium was filled with gasps as people were scared for the guy but it was interesting. So far the trip was going good not that great though. Next up on the line was the elephant show which was enjoyable by all.
Tricks by elephants of all sizes made the act look funny but interesting at the same time. Especially an event with guest interactions where elephant will throw darts at the wall ahead of which the guest is standing and none of them would hit the guest. I wish I could be the volunteer but seated at the backseats it was impossible for me to get chosen. (P.S. try occupying front seat at least for this show!)
Soon we headed towards the last attraction which wasn’t payable on extras, The Pig Show. Now this was something new for us, especially after looking at pigs painted with human and animal feces in India we were hell amused to see pink coloured shinny pigs all lined up for their race, yes it was a pig race.
Pigs that were not less an 80-100 kg were running to win. They were of different sizes and shapes and the view was something different indeed.
So in the ticket value, we only had these many things with us and rest all were extras that cost heftily. So neither walking with tigers like your pet nor letting them sleep on your lap was for free but I was not leaving without doing at least one of these so I ended up with a baby tiger making him sleep on our laps and feeding him from a bottle of milk!!
Damn his eyes were so pretty and his fur was beautiful indeed, I couldn’t believe I had a tiger on my laps even if a baby it was a tiger at least!!
Later I even got lucky to play with one, though the staff there didn’t allow anyone to play for free I somehow managed to sneak myself in and found a small tiger baby caged with no ceiling I tried playing and I guess he was enjoying. (P.S. he had sharp nails got my skin scratched)
Few of the other services available that we didn’t take were:
• Crocodile feeding
• Picture with scorpions
• Pig feeding
• Tiger baby cuddling
• Big tiger photography
• Elephant rides
• Elephant feeding

Honestly the day went good, for the rates that they are charging the tiger show, elephant show, crocodile show, and pig show seems like a good deal along with few other animals in the cage-like deer, two-humped camel, etc. and if you get lucky like me you get to play with tiger without any fee as well.
The day turned awesome as we got a chance to play with the tiger on our laps feeding it, it truly was a great one time experience and another beautiful chapter in my book of memories!!

Feeding a tiger cub on our laps!! 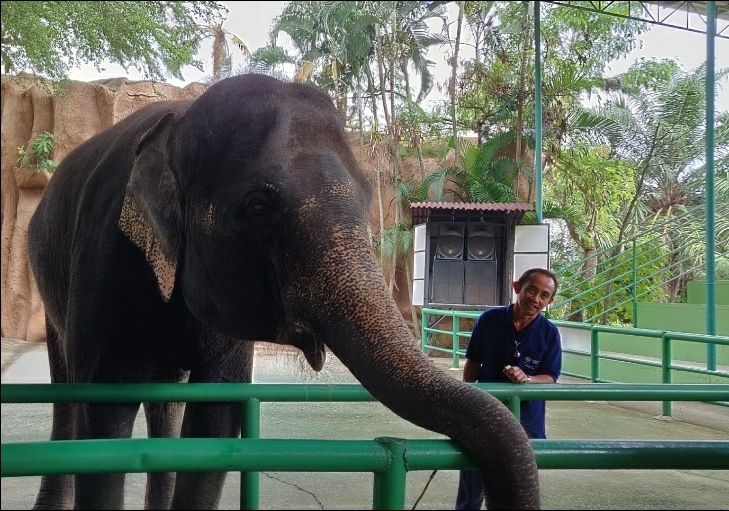 Got lucky!! Playing with a tiger cub