The Tiger Temple at Kanchanaburi

After the Bridge on River Kwai, it was finally time for the much awaited visit to the famous Tiger Temple. After Poom purchased the tickets, we rather gingerly signed the indemnity (?!) form, quickly forgot all about it and cheerfully walked in a large forest area, with lots of trees and deer roaming around at ease. To our left was a huge cage which housed some beautiful birds. Walking further, we saw a pond with wild buffaloes swimming and besides that was a cage with two beastly looking bears. Having seen the beautiful, colourful temples in Bangkok, I kept on wondering how further inside the real temple was. Upon asking, Poom said that the forest area was considered as the Temple and there was no specific chamber for the Gods.
Just ahead of us we now saw the gigantic tigers playing with a monk. People were queuing up to walk them and get a picture. But first, we were explained some ground rules. Our clothes had to be of pastel shades and  bright colours were not allowed. We were supposed to walk behind the tigers and give our cameras to the temple staff who would click a picture for us from the front. Rather Mechanically but still excited, we walked with the Tigers which was indeed a different experience. So around half a kilometre ahead there is a place where all tigers can be unchained, rested and play. After all tigers were walked down, the volunteers at the temple shared some information about the temple, how they have rescued the animals, and how they intend to introduce these tigers back into the nature. We wondered, why on seeing so many people they just didn’t pounce on to us. But we were informed that these tigers are fed cooked meat and hence raw meat doesn’t seem like food to them. Over and above that, most of the tigers have been within the temple and hence they have always known men to be their friends. An example of this friend we saw, a monk playing with the tigers just like someone played with their children.
There was a second round of photo session, where one could pose with the tigers. For some extra bucks, one could take their head in their lap or even play games with them like throw and fetch. However exciting it seemed, tigers didn’t seem to be the ferocious beast we have always imaged them to be and seeing them play like tamed dogs just felt a little sad. After a short walk around the area and feeding some cubs and deer, we finally started our journey to a beautiful waterfall and river camp.

Wat Pha Luang Ta Bua, or the Tiger Temple was established in 1994 as a forest monastery and sanctuary for wild animals. In 1999, the temple got its first tiger cub. With time, many more tiger cubs were given to the temple, usually orphans, and many more were born in the temple. Today, there are more than 120 tigers in the temple and it is perhaps the largest single concentration of tigers in the world. The species of tigers which live inside the temple premises include Royal Bengal, Indochinese and Malayan tigers. The temple targets building a larger sanctuary which will give a natural habitat for the tigers. 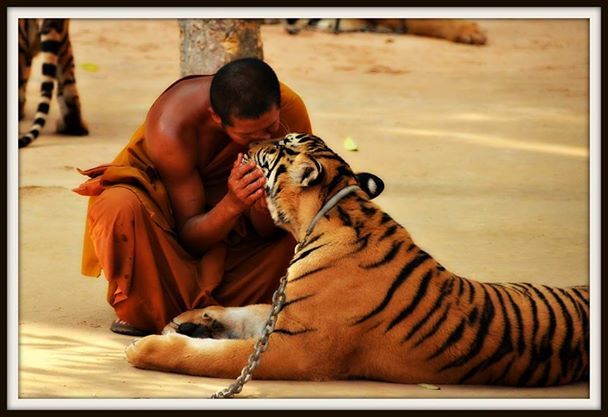