Cambodia: From Temples to Tombs

There is no place in Cambodia where you can’t find at least one thing to light up your imagination. From the tiny villages around Siem Reap to Phnom Penh's expansive boulevards, the country is a study in contrasts.

Cambodia shares borders with Vietnam to the East, Laos to the North, Thailand to the West, and the Gulf of Thailand to the Southwest. Its natural beauty coupled with tumultuous history makes Cambodia an intriguing destination for travellers. Stand in awe of the architectural achievement of Angkor Wat and contemplate the horrors of the Killing Fields at Phnom Penh.

Cambodia has an extraordinary, vibrant, unavoidable soul and it rubs off on every person that travels here. Whether you grew up there as a child or you’re just passing through, you will be overwhelmed by the sights and sounds on this Kingdom. It’s a true land of smiles, with an understanding acceptance of the imperfections of life. As a traveler, unless you know the history, you would never expect that these people have had one of the most horrifying and brutal histories of any race in the world.

The dominant features of the Cambodian landscape are the large, almost generally located, Tonle Sap (Great Lake) and the Bassac River Systems and the Mekong River, which crosses the country from North to South. Cambodia has undergone many name-changes through the years. It was called the Khmer Republic during its republican years, Democratic Kampuchea under the Khmer Rouge regime, and People’s Republic of Kampuchea under the leftist group called Salvation Front. Today, in its latest government form, it is officially called the Kingdom of Cambodia.

One of the Seven Wonders of the World, Angkor Wat is the reason most people visit Cambodia. Angkor Wat was first a Hindu, then subsequently, a Buddhist temple complex in Cambodia and is the largest religious monument in the world. The entire complex is seeped in history and mysteries and has some of the best religious architecture on offer. It has become a symbol of Cambodia, appearing on its national flag, and is the country's prime attraction for visitors. The entire temple complex is huge and it is impossible to cover it in one day. You can buy passes valid for a single day, three days or a week. Do not miss the sunrise. One warning: Beware of the monkeys. They swarm the place and will grab stuff out of your hands.

Cambodia's largest city and capital, Phnom Penh still shows signs of its French colonization days. Sprawling boulevards and palaces contribute to the city's eclectic architecture. The vibrant streets of Phnom Penh are full of colorful sights. The city possesses an exciting range of historical and cultural attractions to tout, along with countless restaurants and nightspots. You can visit the Royal Palace and the Silver Pagoda located just next to the palace grounds. A short walk away, the National Museum beckons with room after room of Khmer sculpture, ceramics, bronzes, and ethnographic objects. To get a taste of city life, visitors can walk along Sothearos Boulevard. 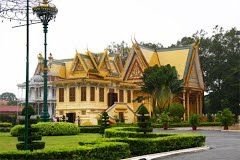 Royal Palace buildings include the Throne Hall, used for coronations and diplomatic and other official meetings, and Chanchhaya Pavilion, used as a venue for the Royal Dancers, as a tribune for the King to address the crowds and as a place to hold state and royal banquets. 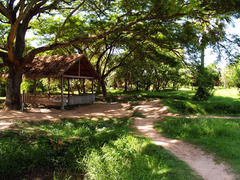 Just outside Phnom Penh lies one of the largest mass grave sites in Cambodia, where it is estimated over one million Cambodians were executed during the Khmer Rouge regime. The scale of the site, coupled with the detailed narration over the audio guide, is deeply moving and provides real insight into the country's violent past. 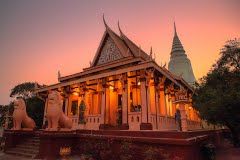