Jaipur: My first impressions while exploring the tourist attractions

On the last post ' Why women should travel alone at least once,' many readers shared their valuable thoughts, highlighting things that may seem obvious but nonetheless are very crucial for female travellers.

Mabel Kwong, who is an avid traveller, pointed out that while preparing for solo travel, she plans very thoroughly and checks out if the place has been in news recently for any wrong reasons. I couldn't have agreed more.

Monica, a travel consultant understands the initial fear of some of her clients to travel solo, and feels happy when she helps them to overcome their fear. Jennifer Jeneu finds solo travel empowering. believes that you definitely take in your surroundings much more when you travel alone.

'Travelling solo helps us to connect with self and the surrounding with equal vigour,' says .

In this post, I share my impressions of the city of Jaipur, while on the solo trip. 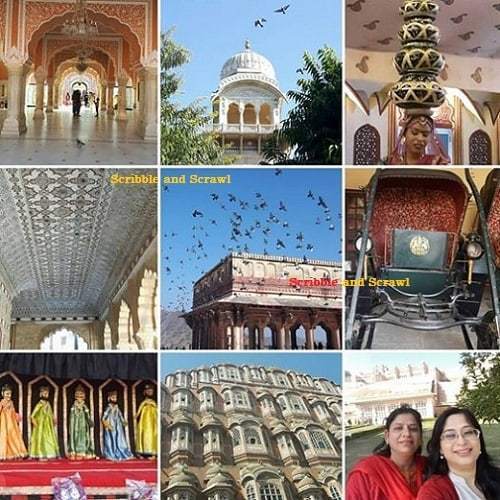 Since I would be travelling alone, I had chalked out an itinerary, after researching about the city and consulted a friend. On the first day of my stay, I would have half a day to myself for sight-seeing. So I planned to see the City Palace, and other attractions around it such as Jantar Mantar, the famous Hawa Mahal and Govinddevji temple. On the second day, I booked the ticket for Amer Fort through Rajasthan tourism portal. On the third day I would go through the bazaars and then to the New city areas to see the Laxminarayan Temple (Birla Mandir).

I also booked a pickup car to take me to the hotel from the airport. With all preparations in place, I was all set for my first solo trip.

When the flight landed in Jaipur, I found the driver waiting for me. On the way to the hotel, my initial impression of Jaipur was that the city has a well-planned layout. To me, it looked somewhat similar to how Delhi used to look in the nineties. Into the city, I felt that the distinctive touch of the city's architectural heritage was apparent at junctures where pink red sandstone structures lined the sides of the road. 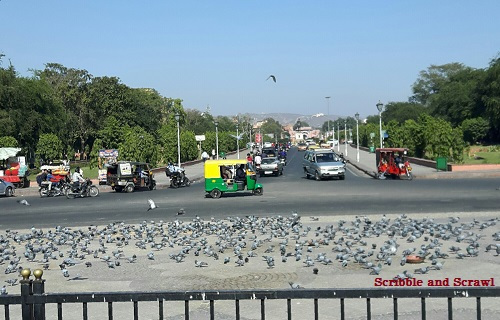 My first tryst with the art and architecture of Jaipur began at the hotel itself. The hotel 'Umaid Bhawan' is originally a haveli (old mansion) that has been converted into a hotel. The rooms and corridors, decorated with colourful Rajasthani paintings, carvings, murals and frescos created a warm ambience. The staff was courteous. On reaching my room, I noticed that even the white ceiling had colourful floral motifs on it.

Also Read: Use of Rajasthani Miniature Paintings in Home Decor 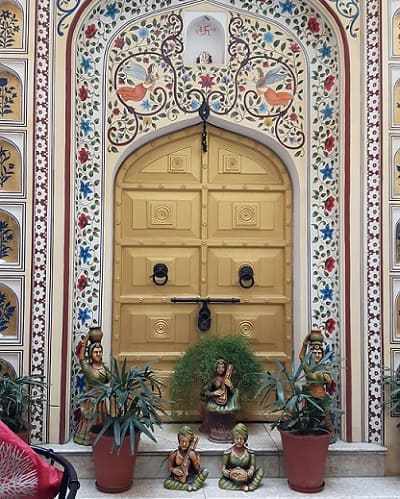 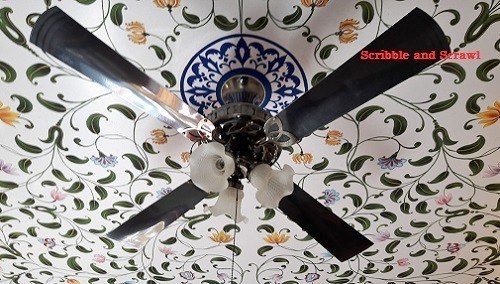 Jaipur's obsession with royalty was evident from the several pictures of the royal family that hung on the walls of the rooms and corridors. The pictures of Maharani Gayatri Devi, who was one of the most elegant and beautiful women of her times, adorned the walls of my room. The door of the balcony opened into a courtyard with a fountain. Just outside the room was a cosy place to lounge around in the afternoon.

On the first day of my stay, I was free after 2.30 pm. I started for the City Palace. This time, I decided to use the local transport.

One of my friends had told me about the e-rickshaws that ply on the roads of Jaipur. These are battery driven rickshaws, which limit the pollution, and are less noisy than the regular autos. As these e-rickshaws are not commonly seen in Mumbai, I thought of taking a ride. Luckily I found one on the main road. I hopped into it after negotiating a fare of Rs 120, with the driver. The auto driver had probably figured out that I was not a local, so on the way, he chipped in his recommendations as well. Google maps made it easy for me to figure out the route. 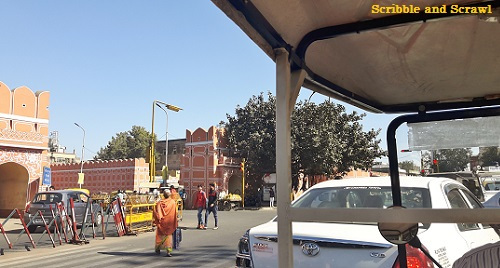 The first building I saw was Mubarak Mahal that is built in a fusion of Rajput, Mughal and European architectural styles. Inside this building is a museum that displays the royal costumes worn by the Maharaja. 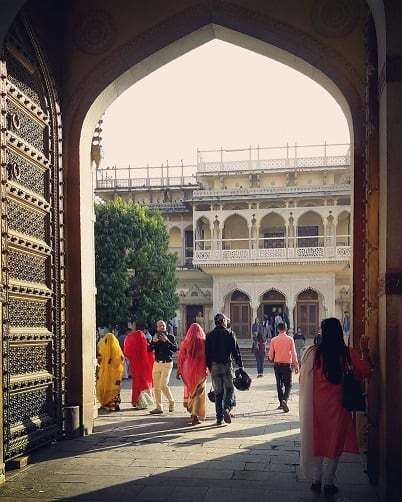 However, the building that attracted me more was the one opposite it, called Chandra Mahal. It has an impressive entrance near which a guard, with an impressive gait, stood wearing a bright red turban. 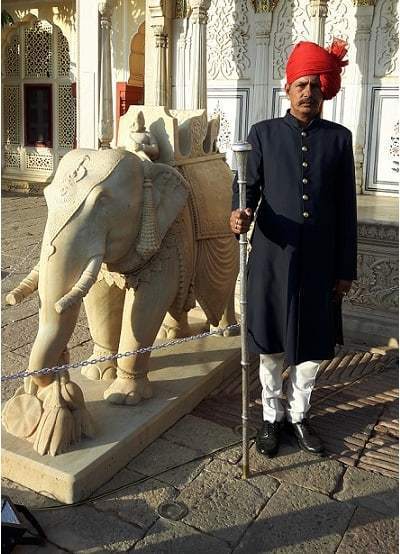 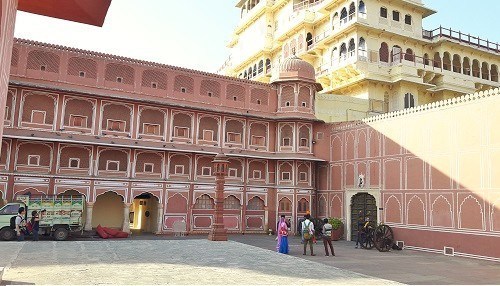 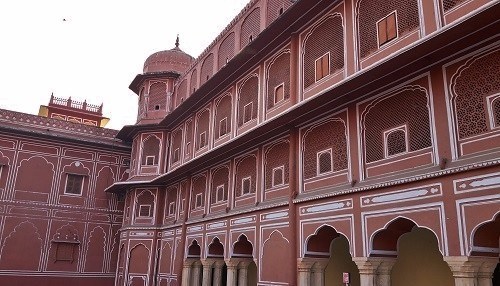 On entering through the gate, right in the centre of the square compound is the Diwan-E-Aam, the Hall of Public Audience. The white marble flooring, crystal chandeliers hanging from the ceiling, and the symmetry of the arches, with intricate carvings, aligned with each other are a sight to behold. 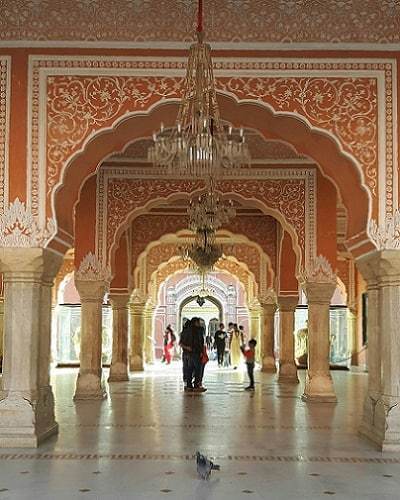 In the Hall are two huge silver urns, which hold the record of being the world's largest sterling silver vessels. These were specially made by Maharaja Sawai Madho Singh II, to carry the water of river Ganga for drinking during his trips abroad.

'A lavish attempt by the Maharaja to preserve his religious sanctity!' I thought. 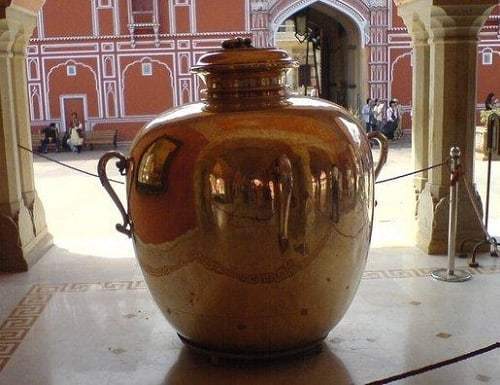 Seeing a circle of rifles adorning one of the walls, I stood in front of it, and. clicked a selfie almost imagining myself as a Rifle Rani . (Queen of Rifles). :-) 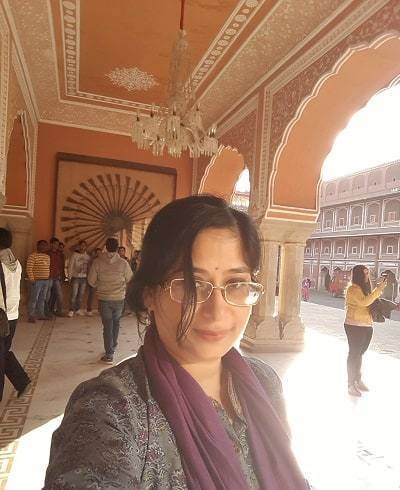 Also See: Vintage Pictures of Forts and Palaces in Rajasthan

After having my fill of amusement and amazement at Diwan- E - Aam , I proceeded on to the next building, ' Diwan-E-Khas ' (Sabha Niwas) or the 'Hall of Private Audience.' This chamber, with the ceiling painted in red and gold colours, functions as an art gallery. It has exhibits of Rajasthani, Mughal and Persian art, and portraits of Maharajas. Photography is prohibited here.

One of the buildings inside the compound called 'Baggi Khana' houses the royal carriages used centuries ago. 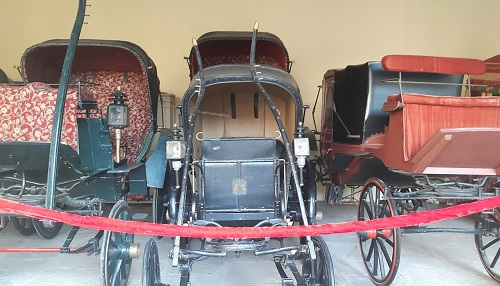 A carriage known as the Victoria baggi was gifted by Prince of Wales to the Maharaja in 1876.

One of the gates led to an inner courtyard. The doors and jharokhas facing the inner courtyard had beautiful peacock frescoes , with carvings in green and blue colours. I marvelled at the sight of the frescoes, which rendered an artistic appeal to the overall appearance of the building. 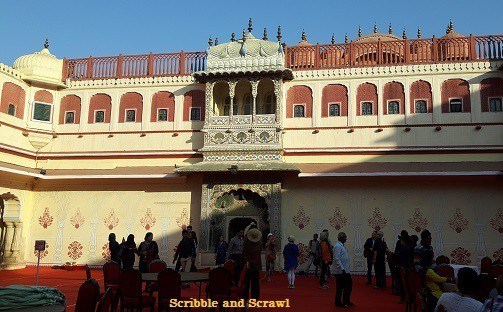 Satisfied, I walked out of the City Palace. At this time, I received a call from my friend who told me that she was on her way to Jaipur from Jodhpur. Excited about this new development, I walked towards the next spot Jantar Mantar.

I can go on and on, but I will stop here for now to avoid this post from becoming too lengthy. Hope you enjoyed the virtual journey so far.

Join me on the next part of the trip in the post; 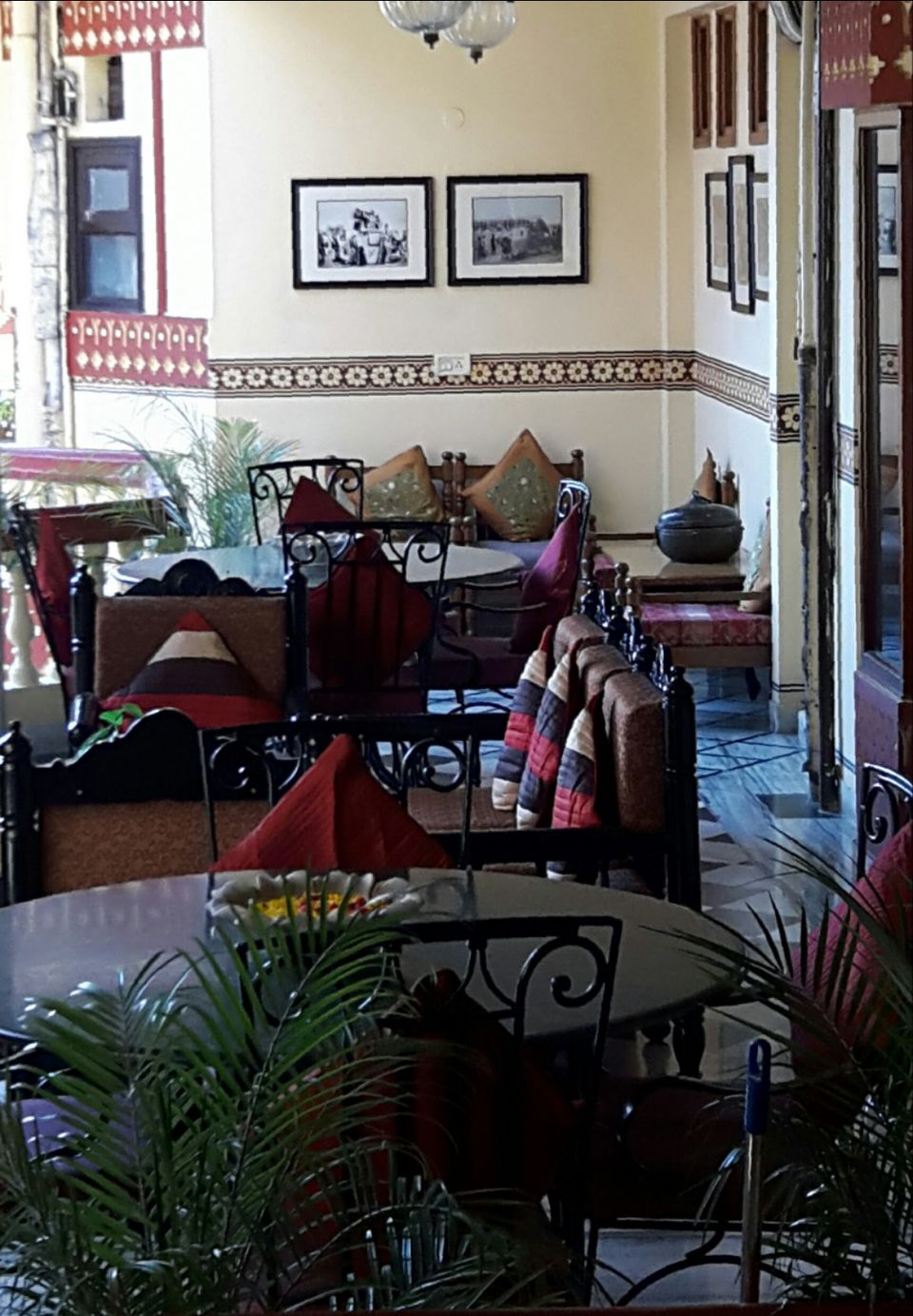 Beautiful carvings on the wall 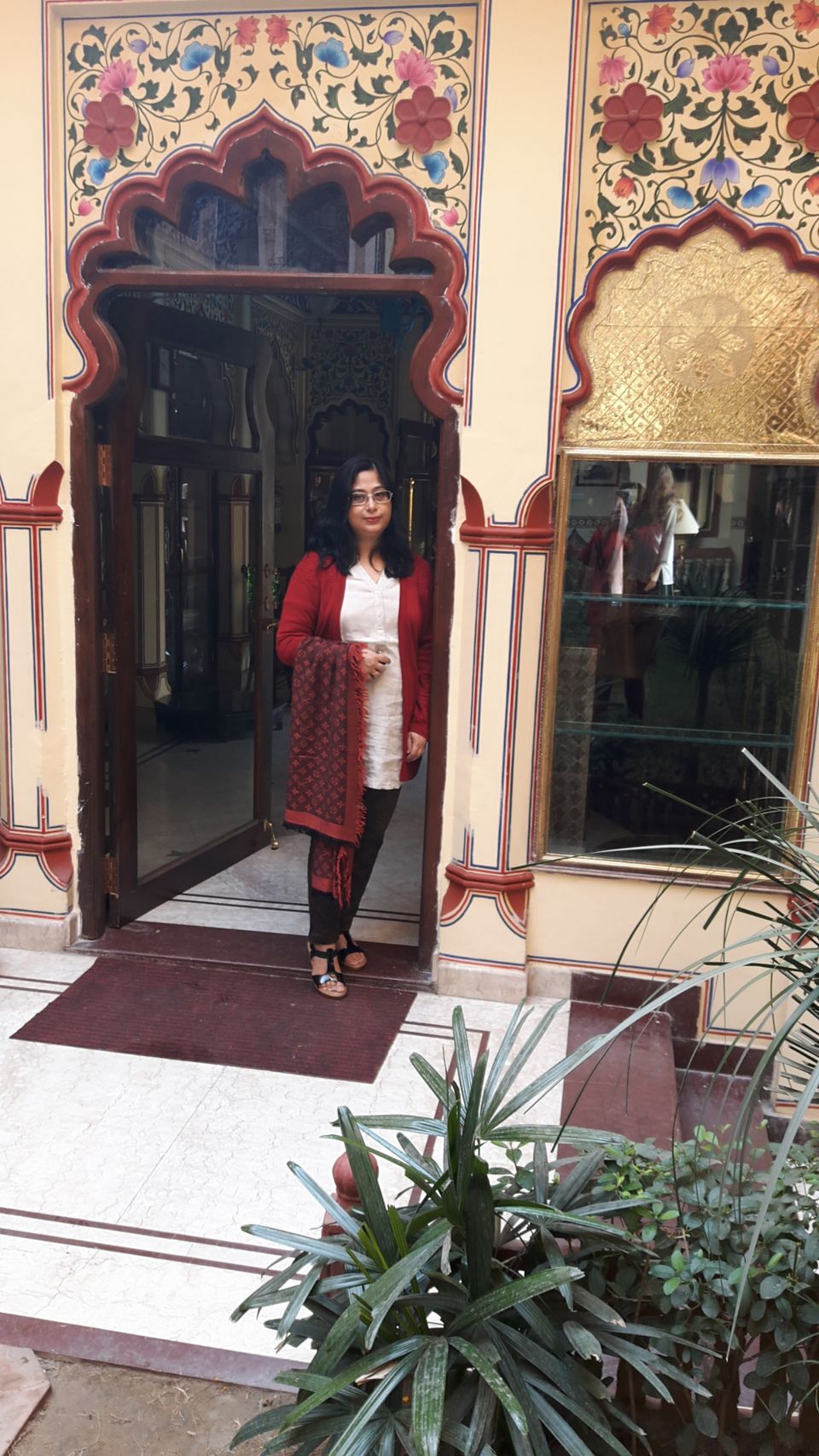 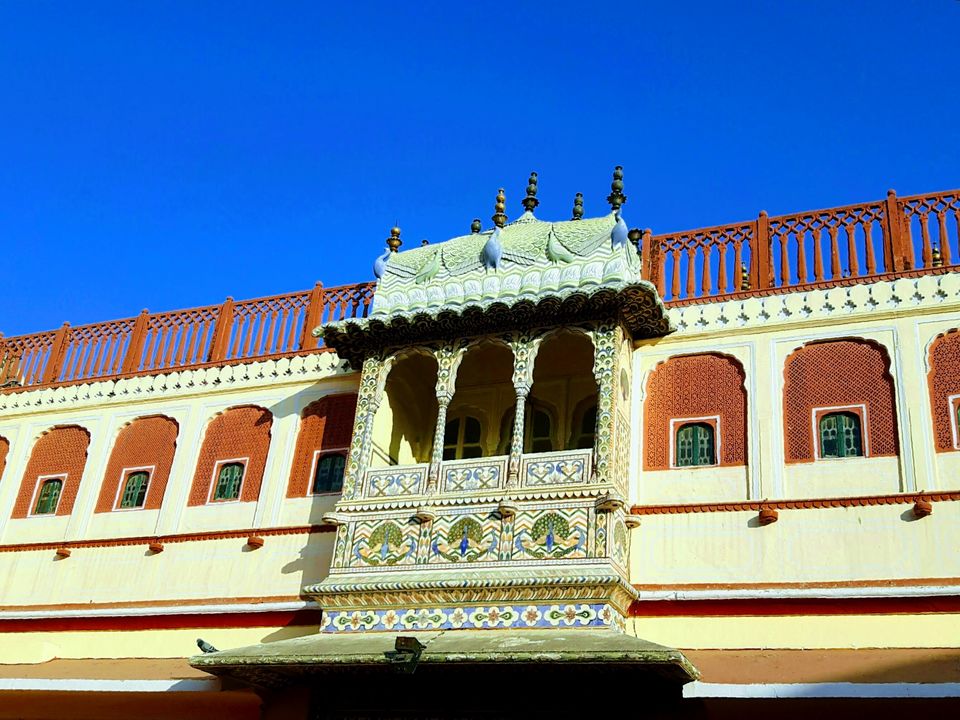 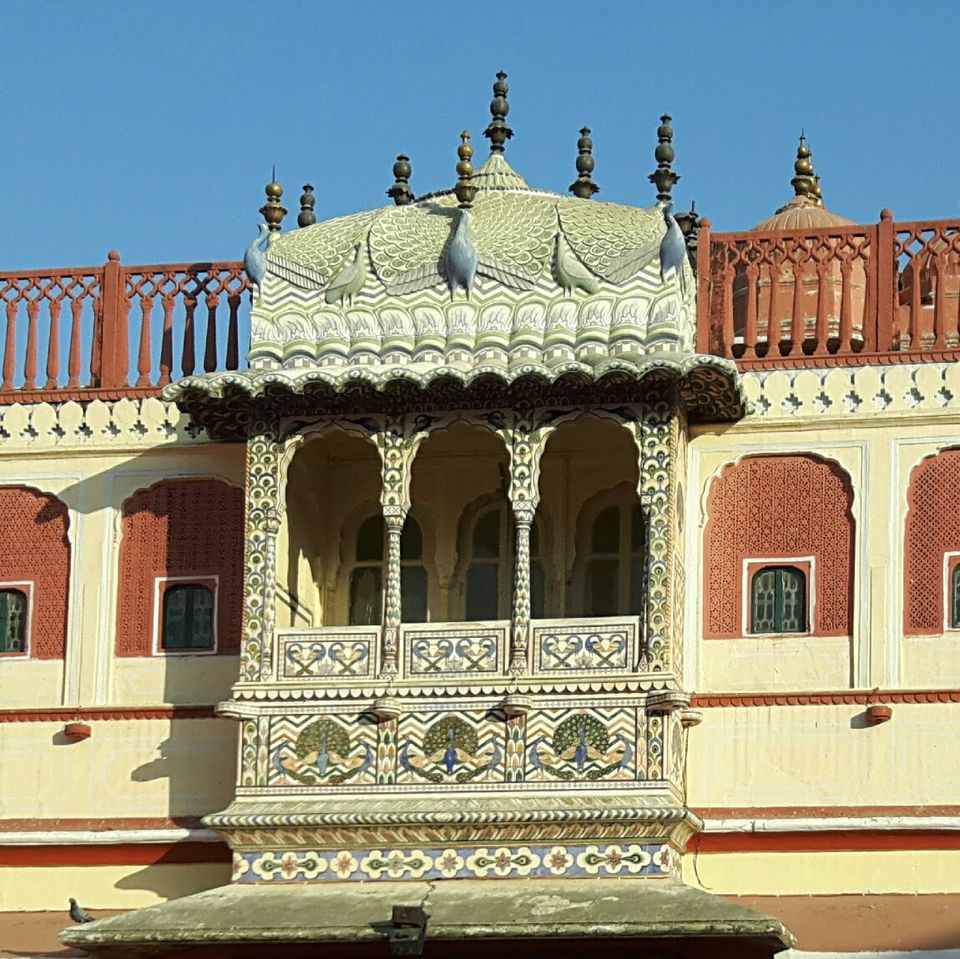